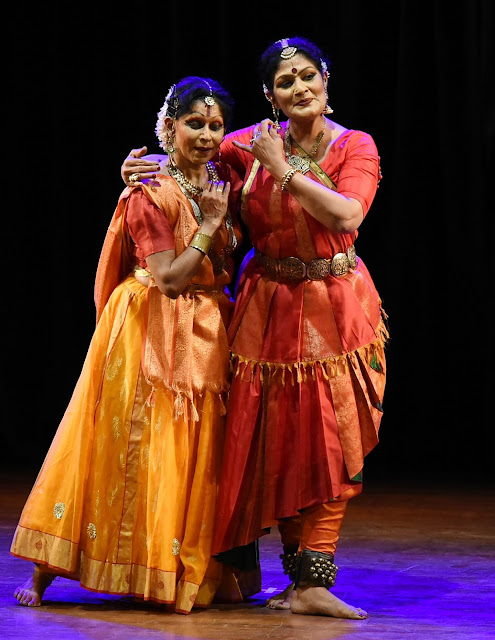 Words fall short to describe the excellence and expertise in this performance. But more than that, it was an experience where the rasa seeps all the way to the core of the spectator, where the lines between audience, performer and worshipped melt, and where one feels the bhava of the performer as she worships her lord. On the 28th of February, at the Chinmaya Mission in Delhi, Gurus Geeta Chandran and Shovana Narayan, in Bharatanatyam and Kathak, presented a programme titled ‘Vrindavan’, which was graced by their (Shrivatsji) guru from Vrindavan. The progamme was organized by the Indian Cancer Society.

The first piece was a duet, ‘Ali ri mane lage Vrindavan neeko’, a Meera bhajan extolling the mahima of Vrindavan dhaam. The experience was enriched by Sudha Raghuraman’s vocals. The piece began with melodious flute by G. Raghuraman. The two dancers enacted the beauty of Vrindavan, the latas or creepers, the trees, the holy tulsi everywhere, the clear and pure waters of the river Yamuna, the lotuses blooming in it. The dancers playfully depicted the playing with water and the churning of sweet butter, which is the bhog for Lord Krishna, the tulsi or the vrinda mukut that Krishna wears, the peacocks, the mynahs and the cuckoos that frolic in the nikunj, their sweet sounds resounding all around. Finally, Geetaji enacting Krishna and Shovanaji as Radha played together, showing Radha  snatching  the murali from Krishna. Then the two took stances for Radha and Krishna in leela, also depicting the lifting of the Govardhan by Krishna. The two dancers matched their footwork and actions in their own forms. The bhavas were presented with masterful little nuances. 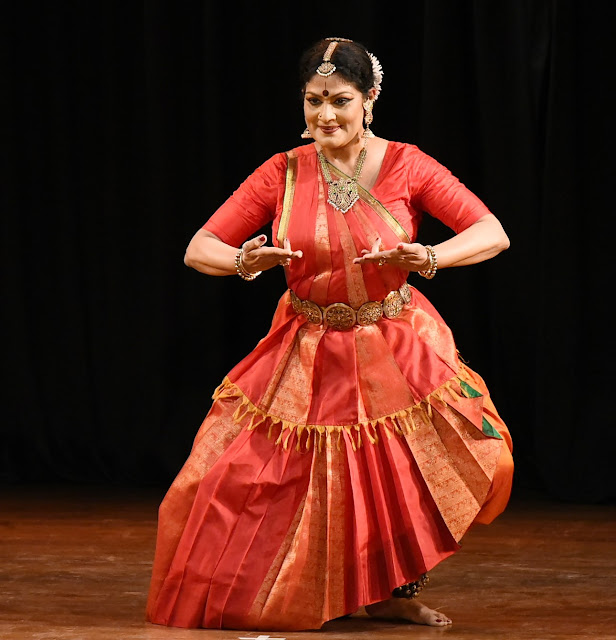 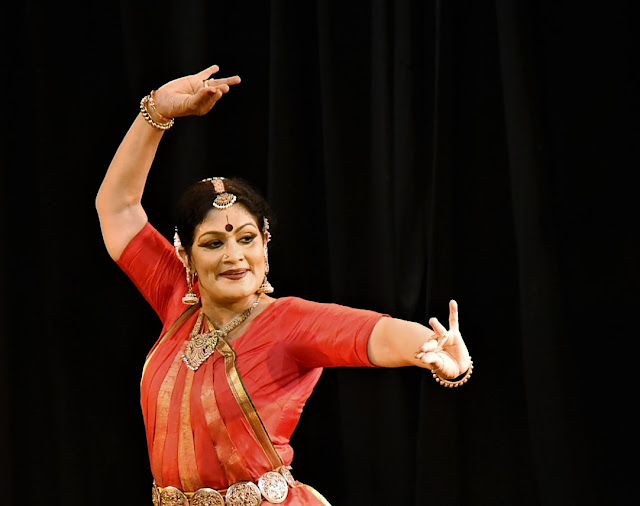 Next, Geetaji presented a solo varnam. This varnam was special since it was based on a composition by the 16th century Pushtimarg Vaishnav saint Vallabhacharyaji. The path of Pushtimarg is based on kirtan, smaran, darshan and seva bhakti. This is how Rajiv Chandran elaborated on the varnam.

Before I begin to describe the varnam, I would like to reiterate the fact that the wonderful team of musicians present were as much a part of this bliss as the dancer – Sudha’s composition and rendition, G. Raghuraman’s flute, which reminded you of the magic of Krishna’s fiute, the flawless mridangam by Manohar Balatchandirane and the nattuvangam and bols by Guru S. Shankar. 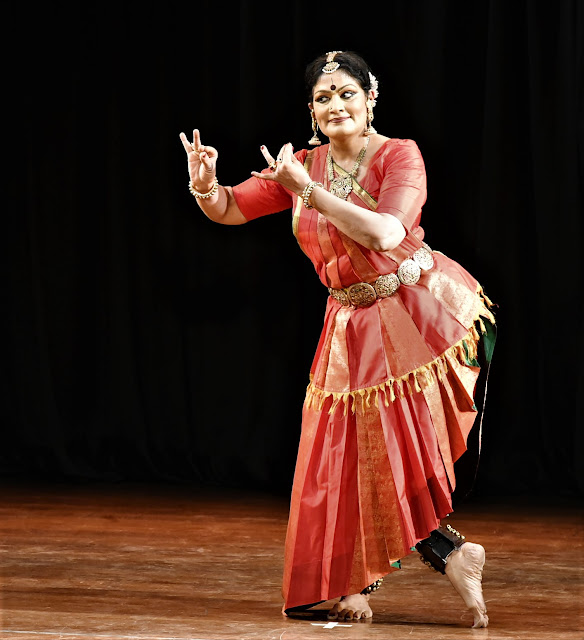 The composition ‘Nandakumar ashtakam’ (in raga mallika) is part of many a Vaishnav bhakta’s morning prayers and it evokes around the beauty and attributes of Lord Krishna. Geetaji began the varnam with jathis and charan sparsh of the lord. The jathis had pace, wide stage coverage and leg balancing. The lyrics are ‘Sundar gopalam ur vanamalam nayan vishalam dukhaharam’. He wears a beautiful garland of flowers and his eyes are like lotuses. 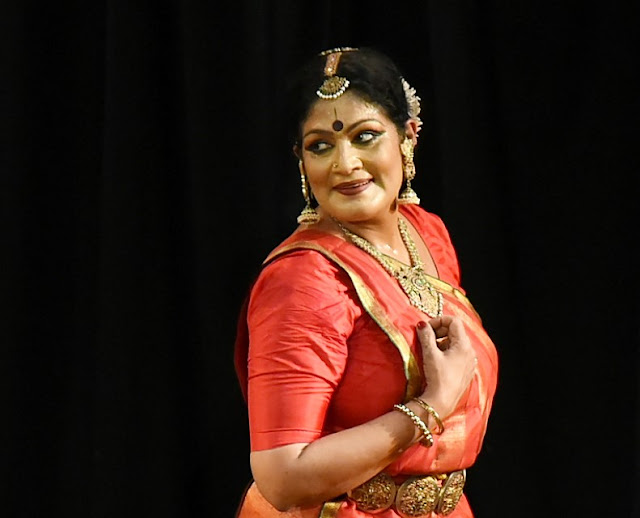 Geetaji performed evocative eye movements that depicted the beauty of his eyes, which could shame a lotus. His beauty sparkled like the moon, so much so that you could not bear to see the light emanating from him. The repetition of the words ‘nayana vishalam’ and Geetaji’s rasa of admiring the lord was very moving. The interspersed jathis were very expansive, with a gait-like footwork. 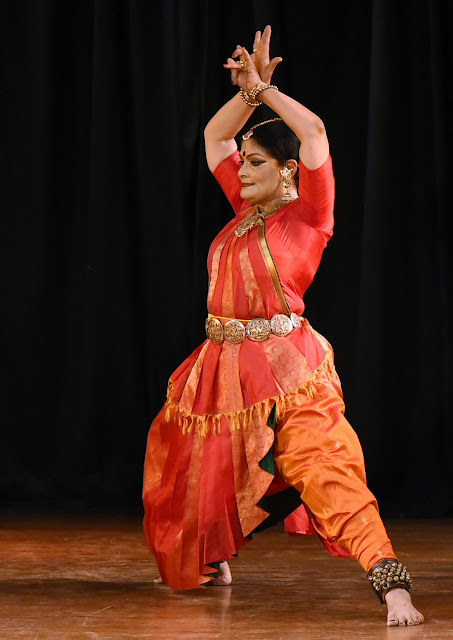 ‘Sir mukut suvesham kunchit kesham natwar vesham kama varam’ – describing the shringar of the lord, Geetaji depicted his mukut in numerous ways. The mukut is highlighted by the morpankh. Geetaji depicted the morpankh through the mor chaal and depicted the mukut in a broad plie, showing the feathers teased by the wind. His locks are black, beautiful and curly – ‘natwar vesham’ – and were depicted not only through his smart attire of a pagdi, dhoti and the lakuti that he carries, but also through the attitude with which he carries himself and roams in Vrindavan. The depiction of kamavaram was my favourite. The nayika gazes at him but as she moves away, she cannot take her eyes off him. She feels the pull backwards as she is trying to leave but finally, turns back, embraces and kisses him, drinking in the rasa from his lips. 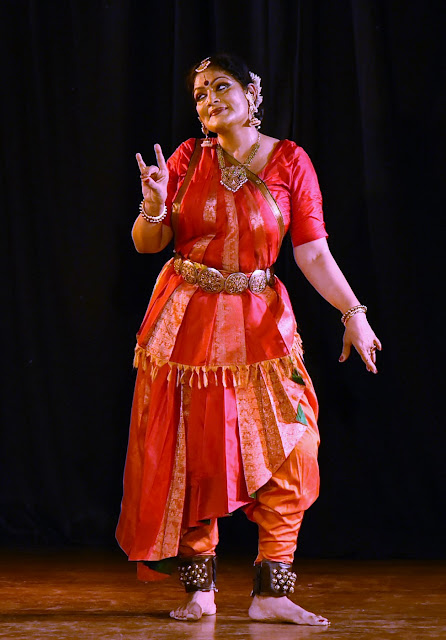 The following jathis had very rapid and strong bols and footwork – commendable work by Guru S. Shankar. ‘Gunjakriti haram vipin viharam param udaram chitta haram cheera haram ’ – for the gunjamal, the flower garland was shown with the bees hovering over it. For vipin viharam, she did a beautiful gait. For cheera haram, it was an elaborate depiction of the entire cheeraharam leela, with Geetaji depicting the gopis and Krishna. Krishna goes around looking for the gopis, who have left for the panghat with their matkis. They remove their ornaments and coyly remove their clothes. They go into the river Yamuna for their baths, swimming around, washing themselves, frolicking in the water and then, diving into the river. But as soon as they come out after their play in the water, they see their clothes hanging on the trees. 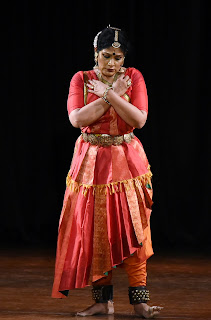 The expressions of the gopis when they see that their clothes have been stolen, crying and drying themselves to find the clothes, was very well depicted. 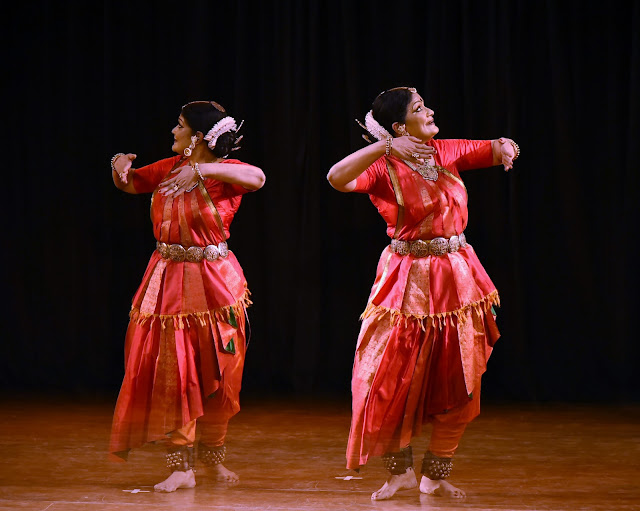 Geetaji depicted the next scene again with intricate nuances and a delicate sensibility – she showed Krishna asking them to come and beg for their clothes. The gopis try to cover themselves up even with their wet hair and try to bribe Krishna with makhan as he makes fun of them. In the final sequence, he asks them to raise their hands and ask for their clothes. They hurriedly dress up when they get their clothes back. You could get goosebumps as you realize that in this leela, the lord has asked his bhakta to shed all his outer coverings and raise his hands in desperation to ask for him and him alone, to attain him. ‘Param udaram’ – she depicted how he caresses his calves as they look up at him. The following jathis were performed very dexterously, with leg lifts and pace, Geetaji moving around the stage effortlessly. 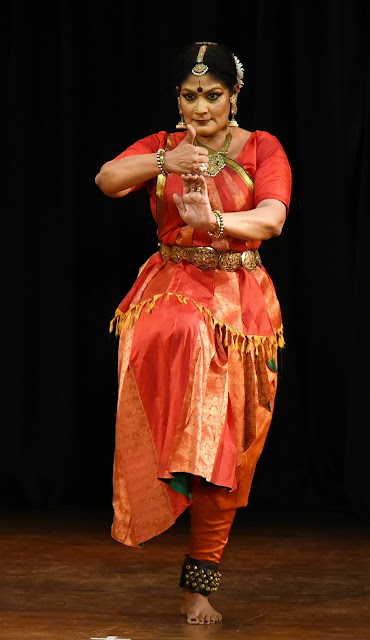 Next was ‘Kaliyashiragamanam krita phani namanam ghatit yavanam mridul taram’. Geetaji depicted the Kaliya daman in a broad plie. The Kaliya nag had to come and prostrate himself in front of Krishna. Lord Krishna is the vanquisher of evil but also the gentlest of all. In the jathis that followed, she depicted the latas or creepers, the lotuses, the calves on both his sides as they look up at him. The last piece was like a charanam in a double speed. She depicted the renu (‘mukhmandit renu charit dhenu vadit venu madhursuram’), the raj of Vrindavan, where he roams barefoot, and the dust that blows and settles on his face, the dhenu that he takes care of and gives his love to, the venu that rests on his lips. 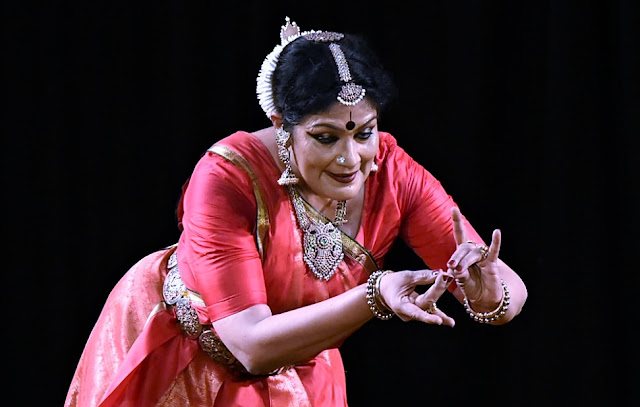 Geetaji’s expressions of looking at the lord, admiring his beauty, were awe-inspiring. In the same pace, she did jathis and finally, a pushpanjali at his feet. The final stance she took was that of Krishna with the flute, walking away and yet looking back. The entire piece was flawless, the epitome of expressiveness, so much so that it affected the audience to its core, producing ecstasy. Geetaji’s costume was very beautifully designed, a very bright red with tinges of green on the borders, and suited her as she posed as Krishna. 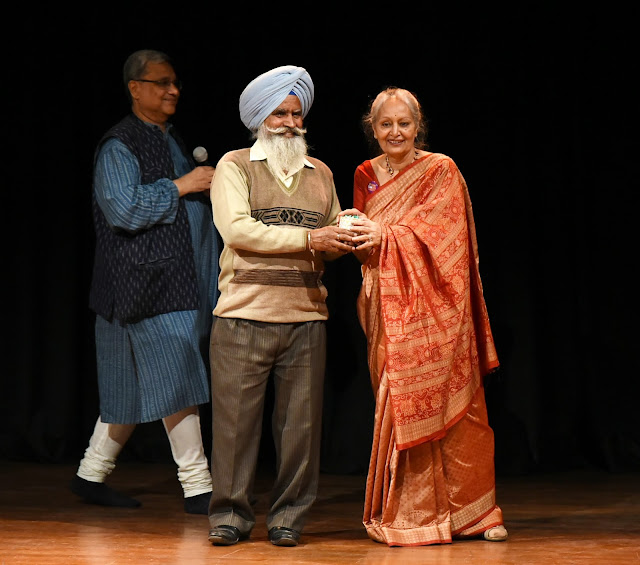 During the interval, it was very generous of the Indian Cancer Society to honour their driver, Avatar Singh, as he was retiring. 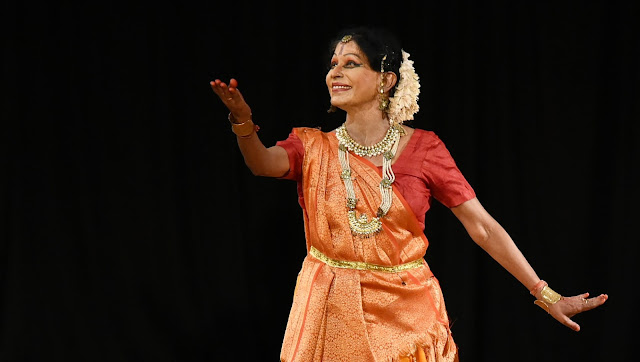 Next, Shovana Narayan took the stage for her solo presentation. She said that the connection between Kathak and Krishna is the natwari, a dance which is attributed to Krishna or natwar, and is also named after him. She exhibited her prowess in nritta or technical dance, in thaat, footwork, natwari, produced the sound of a horse’s hooves using her ghungroo, and drew parallels between Hari and Hara, Vishnu and Shiva. One has a flute, the other a damru, one has snakes as his ornaments, and Krishna is laden with jewels. Krishna does leela in Vrindavan with Shri Radha whereas Shiva does the tandava. 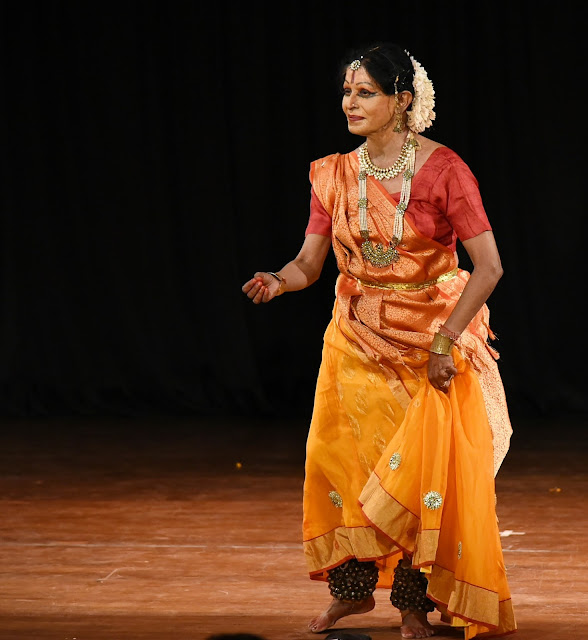 In the second piece, Radha comes looking for Krishna as she is in viraha: ‘kunjan rachyo raas aali, Kanha bin sooni dekhun tori dagariya, neend na pare’. She wishes that if she had wings, she would fly to him and show him her pain. The next part was enacted very sensitively – Radha is counting the days and minutes of her separation by plucking petals from flowers. She makes images in water and in a fit of imagination, wipes them off. In the piece, Shovanaji did a bansuri ki gat, a ghunghat ki gat, chaal-dhaal etc. 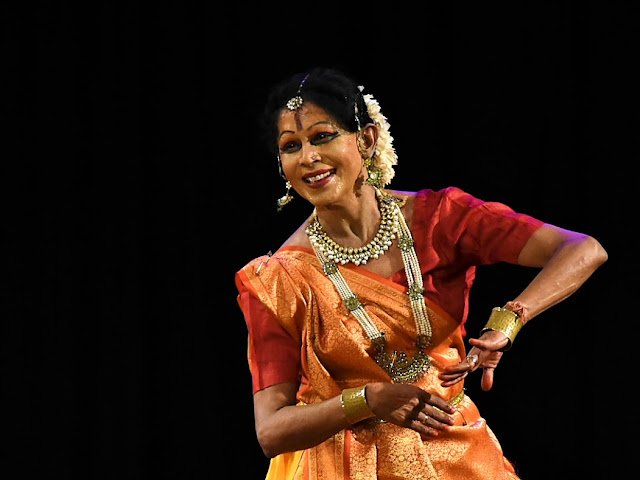 Her next piece was on Draupadi’s cheer haran. The entire dice game and Draupadi’s plight were rendered with a lot of emotion and expressions, with Shovanaji taking on the roles of all the characters involved. 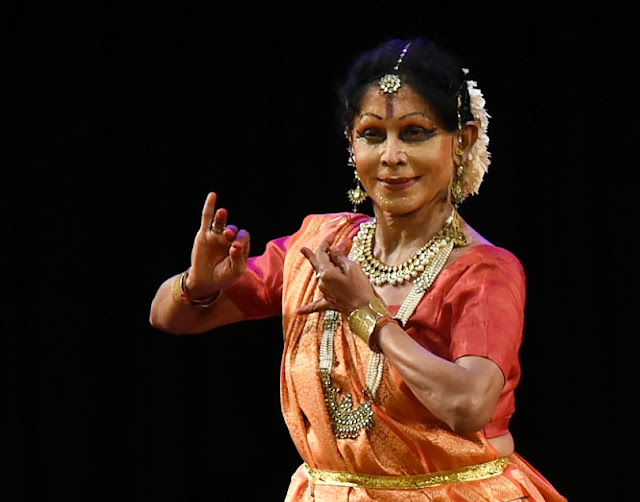 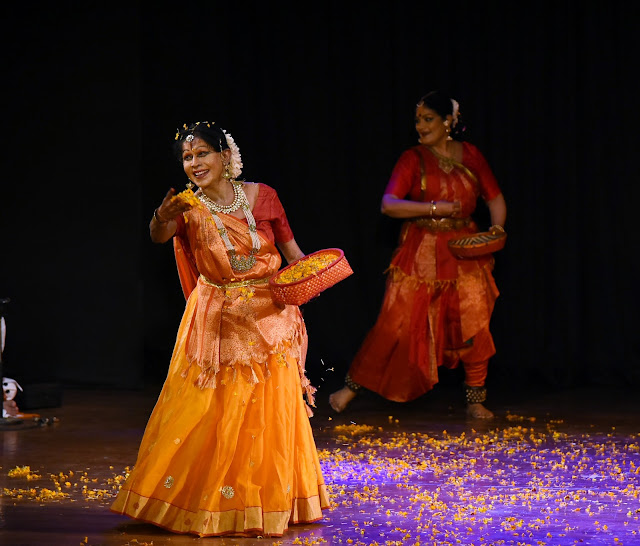 The last composition, again a duet, but this time with the Hindustani accompanists and vocalists, was based on ‘Madhurashtakam’. The lyrics of ‘Madhurashtakam’ are, obviously, very madhur, describing the leelas of Lord Krishna, his beauty and his attributes. Shovanaji and Geetaji alternated on the stage, rendering one passage of the ‘Madhurashtakam’ each through their gestures and stances. Again an awe-inspiring rendition by the two great dancers, filling the heart with bhakti rasa for Lord Krishna. 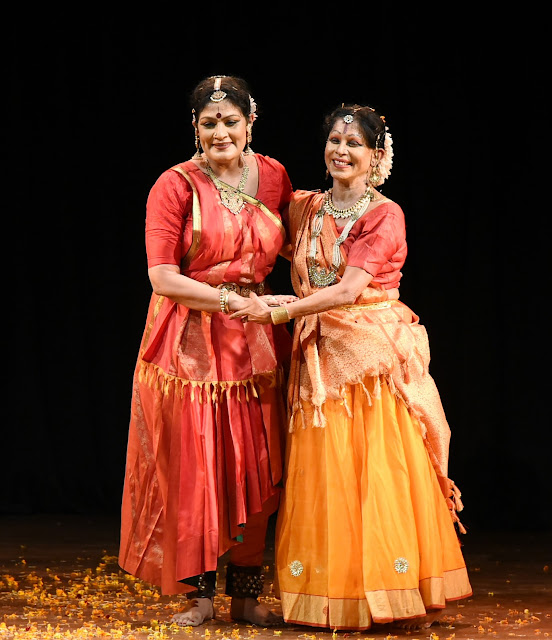 The title for the performance was Vrindavan and really, you could experience the delight of Vrindavan through the dance of these two great dancers, who communicated so much through their abhinaya, which filled the hearts with sukh and ecstasy. The lighting by Milind Srivastava added radiance to the performance. Even two hours seemed short – you wished it would go on and on.