Divya Ravi and Abhayalakshmi M.B. show off their prowess in Bharatanatyam and Odissi 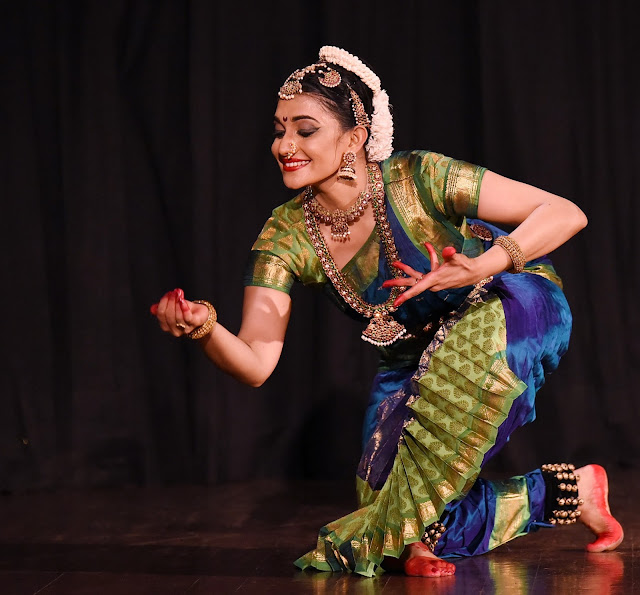 In September last year, IIC Delhi hosted the Double Bill performance. The first one to take the stage was Bharatanatyam dancer Divya Ravi. Divya has taken her training from Gurus Kiran Subramanyam and Sandhya Kiran and Guru Dr. Soundarya Srivathsa, with mentoring in abhinaya by Guru Bragha Bessel. She has also explored Kathak under Karnataka Kalashree Sri TD Rajendra and Smt Nirupama Rajendra, performing with their Abhinava Dance Company as the principal dancer.


I missed the initial part of her performance, so I am starting my description from the central piece, the varnam. Divya depicted the navarasas through the moods of Goddess Meenakshi, a composition by Lalgudi G. Jayaraman in raga Mallika, aditalam. The choreography was by Soundarya Srivathsa. 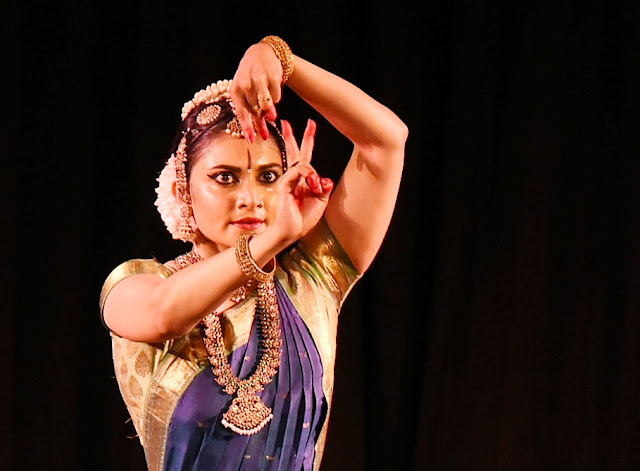 The goddess exudes veer rasa when she vanquishes the demons as a warrior on the chariot. The next bit was an interesting conversation between Parvati and Shiva in disguise. Shiva comes disguised as an ascetic and says derogatory things about himself – that he wears tiger skin, a garland of skulls, his body is smeared with ash, he wears the tripund on his forehead and matted locks on his head. Shiva urges Parvati to give up her husband as she sits in tapasya to attain him. The nritta with good footwork complemented the abhinaya. Parvati is annoyed at the ascetic for his criticism of her lord. 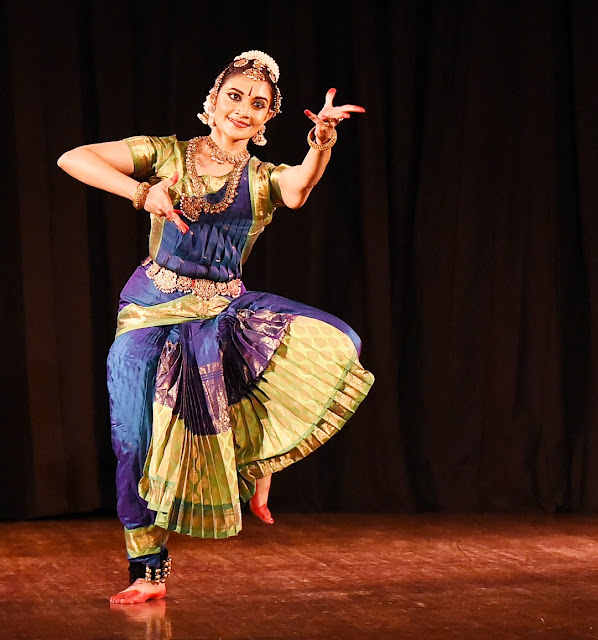 Then, the goddess experiences adbhuta rasa as Shiva opens his third eye and reduces Manmatha to ash. Divya’s hastas were very neat, with jathis that featured impressive leg lifts. Then comes the sentiment Parvati experiences when she sees Shiva reducing the three cities, or Tripura, of Mayasura to ash. 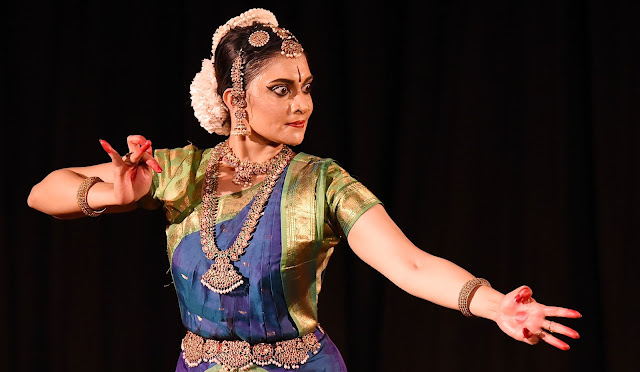 She cannot help but laugh at him when he has to lift and carry logs as a labourer. Divya’s jathis with leg rotations and lifts stood out. 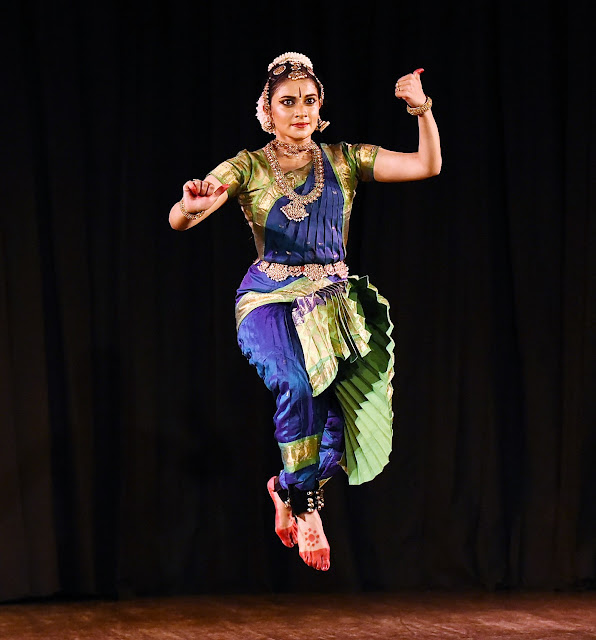 Parvati’s father Daksha held a yagya for all the devtas except for her husband, who did not get the invitation. The devi is appalled at the treatment meted out to her husband, who was disrespected at the yagya. The vibhatsa rasa is evoked in this story as the raging devi immolates herself in the agni of the yagya. The precision of the jathis again stood out. 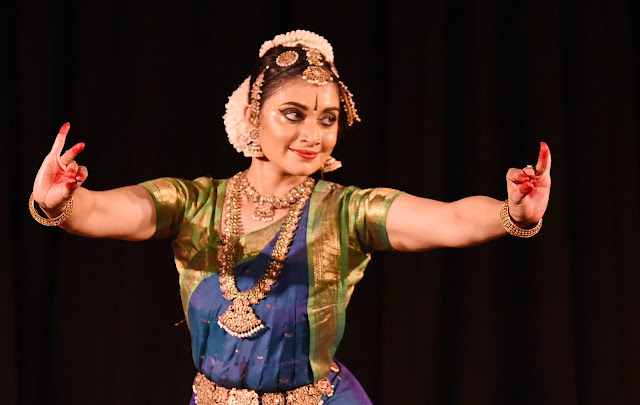 The devi is worshipped as the mahakalini, kali kapalini, bearing a trishul, singhavahini and chandamundavinashini. Here, Divya took stances and postures to elaborate on the lion as the steed and as the devi drinks the blood of the demons. The jathis had expansive movements. 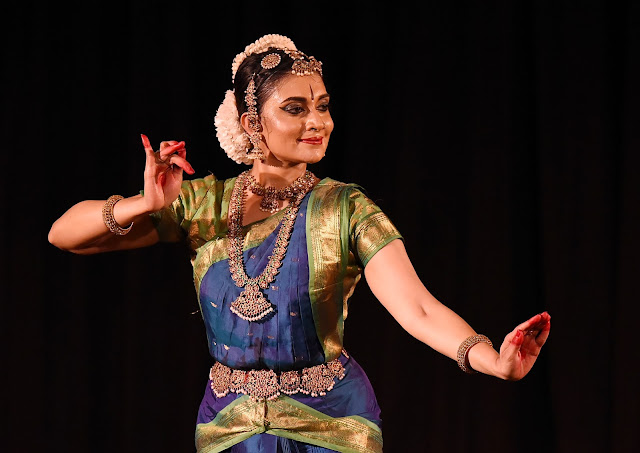 Parvati was scared when Shiva had to drink the halahal or poison that was extracted as a result of the samudra manthan. When Ravana, with his bare hands, lifted Mount Kailash, both Shiva and Parvati were scared. Here again, the jathis had leaps. 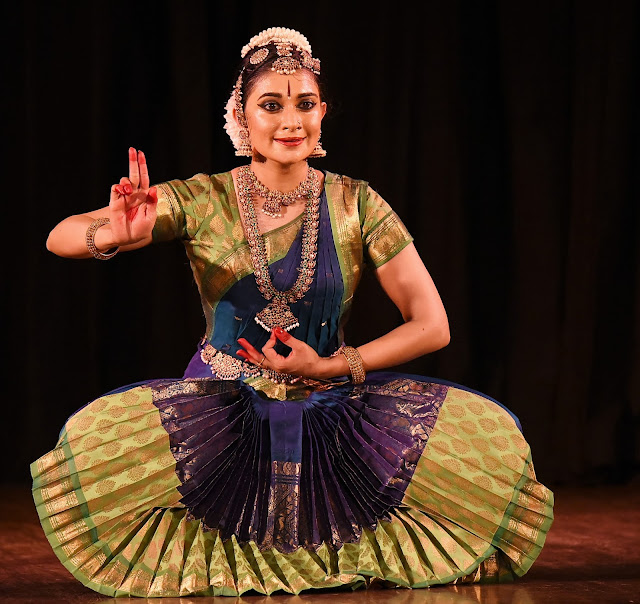 Finally, the varnam ended with the bhakta at her feet in seva, washing her feet with his tears to obtain her blessings, doing vinati for sharanam, invoking the shantaswaroopini meenakshi, chakravasini and sarvadamaya. Divya’s command over Bharatanatyam technique, with its perfection, grace and precision, and her very expressive abhinaya won the audience over. 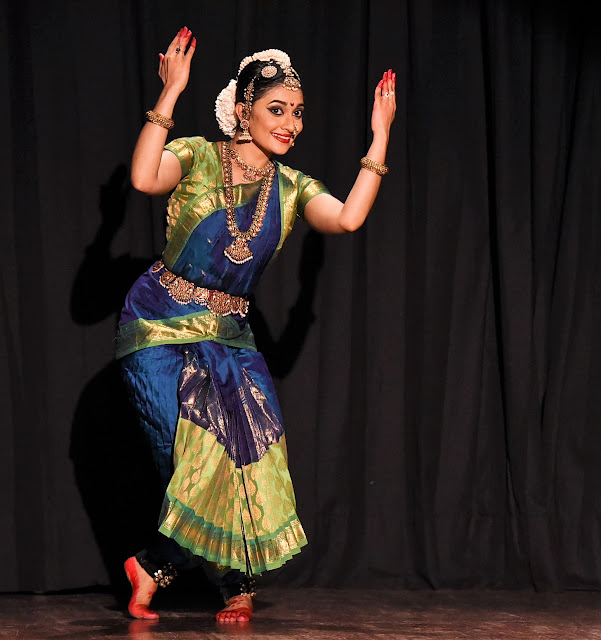 The next piece by Divya had very interesting literature. This was an Eknath abhanga in Marathi. The story goes that Krishna meets five milkmaids who are all very different, not only in their ages but also in the colours that they are wearing. The first is the youngest, who is in white. It’s the colour of moonlight. Her teeth twinkle like moonlight when she smiles. The second milkmaid is older, shy, playful and is wearing the colour of turmeric with a yellow skirt and a bootidar or embroidered blouse or choli. 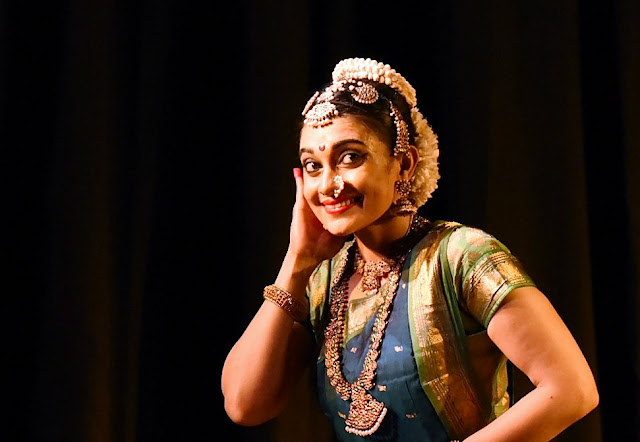 The third milkmaid is dark-complexioned, majestic and wearing a chandrakala sari, black metal ornaments and black kajal. The fourth maid is wearing a bridal red colour and her lips are scarlet like the pomegranate flower. The fifth maiden is in green, wearing green bangles, and she collects morpankha for Krishna’s crown. In the abhanga, they play phugdi, which is a game in which you hold hands and spin without crossing your arms. Seeing Krishna with the flute, these nayikas come to him. The first says she is like the moon and makes butter for him. The white of the butter makes her think of him. The second bathes in a turmeric paste. She wears a pitambar choli and flowers in her hair to attract Krishna. The third wears her hair in a choti, puts on kajal and Chandrakala, and is smug in her attitude. She says that she is like Krishna, that her kajal is like Krishna. 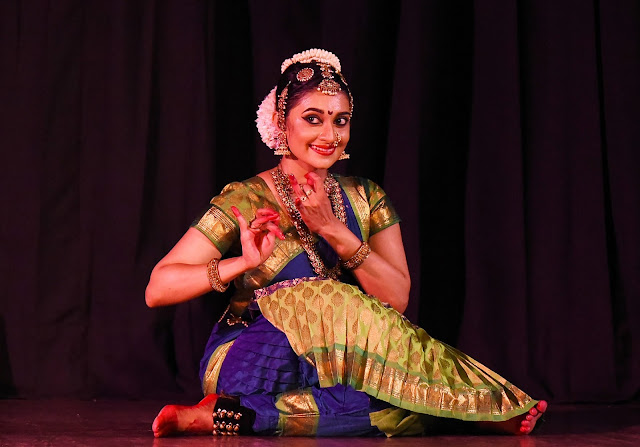 The fourth, or the bridal one, wears a ghunghat, with ‘lal heera kumkum bindi maang’. She makes a paan beeda and feeds it to Krishna, embracing him and kissing him. The five maidens and Krishna sit around and play phugdi. This game is significant because by placing their hands in Krishna’s, they put all their faith in him; also, the loop formed is an infinite loop. Divya did very playful abhinaya for this piece, bringing out the liveliness of the composition. 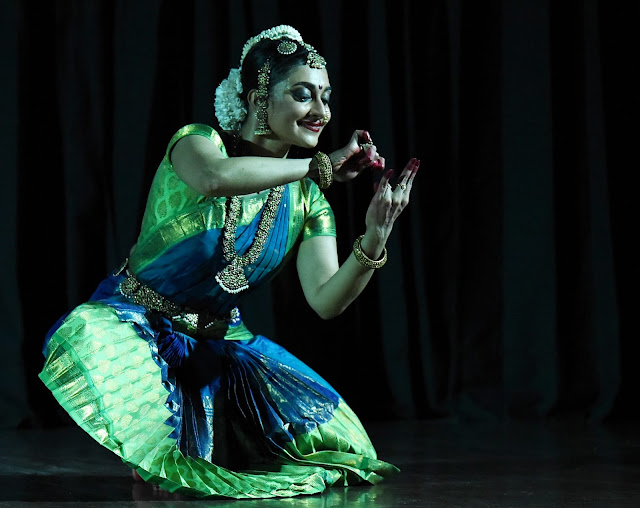 The attributes of each milkmaid were brought out through very expressive abhinaya, making it a very fun-filled piece. However, she said the colours did not have any other significance besides adding liveliness to the composition.

The second dancer for the evening was Abhayalakshmi M.B. from Bangalore. She is a student of both Bharatanatyam and Odissi, and has been trained in Odissi at Guru Sharmila Mukherjee’s Sanjali Centre of Odissi. 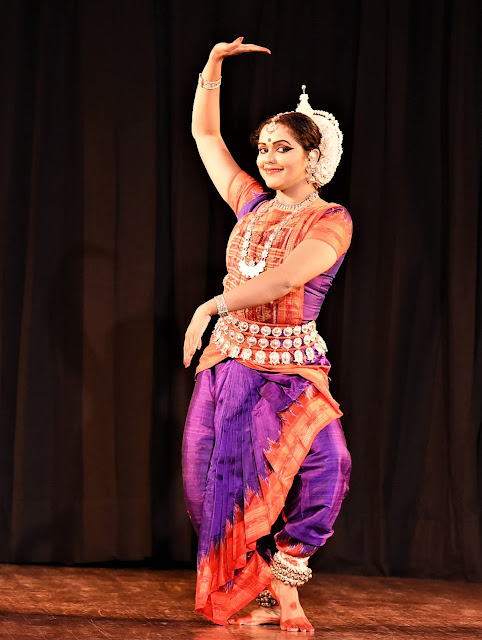 She presented Nrityadhara, which featured pieces from the three main schools of Odissi. The first was a Shankarabharanam pallavi by Guru Pankaj Charan Das, set to ektali. Abhayalakshmi presented well the typical tribhanga and chauka of the form, the footwork on heels with slow lyrical movements, and had good stage coverage. 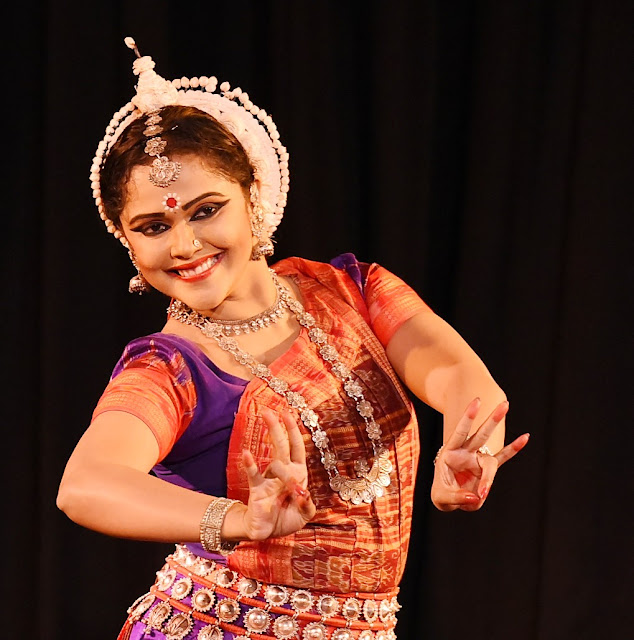 The second piece was a Banamali Das composition by Guru Deba Prasad Das. The dance is called Bandhan nritya. The nayika’s heart flutters when she hears the notes of the flute, which intoxicate her. She goes to the panghat, wades through the water, bathes, and fills her matki with water. Her expressions, which were very subtle and delicate, were apt for the mantramugdha nayika in a composition called ‘Suno Radhe maharani’. She enacted both Krishna and the sakhi. 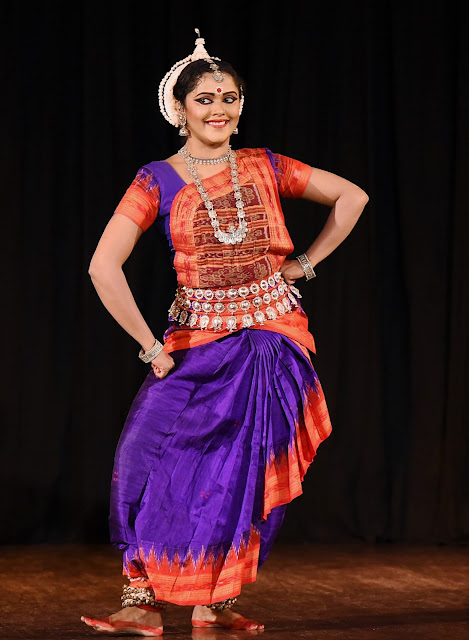 The next piece was an ashtapadi by Jayadev, choreographed by Guru Kelucharan Mahapatra, ‘Sakhi he keshi madana mudaram’. Radha is shown as pining and yearning for Krishna as she describes to the sakhi how she went to meet him in the night and their eyes met. Her sari came loose as he kissed her. 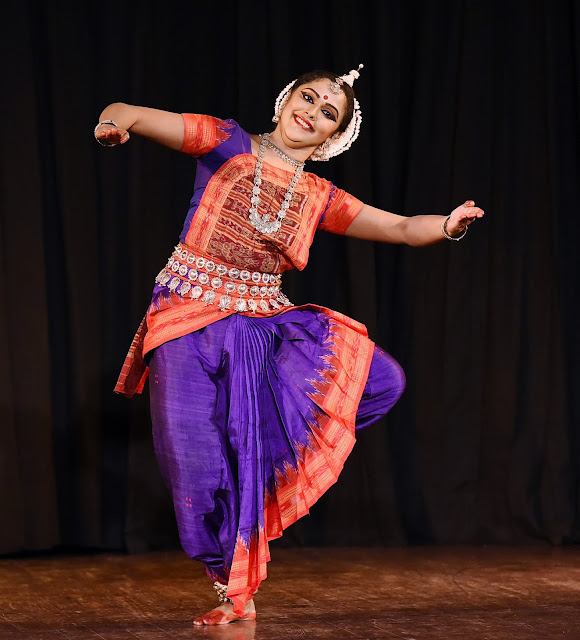 Radha reminisces about how she removed her noopur or anklets and stepped out into the night to go meet him. She went in the dark, blowing out the diya, and shut the door behind her. Her odhni got stuck in the bushes. In the nihvritta nikunj, the two made love. 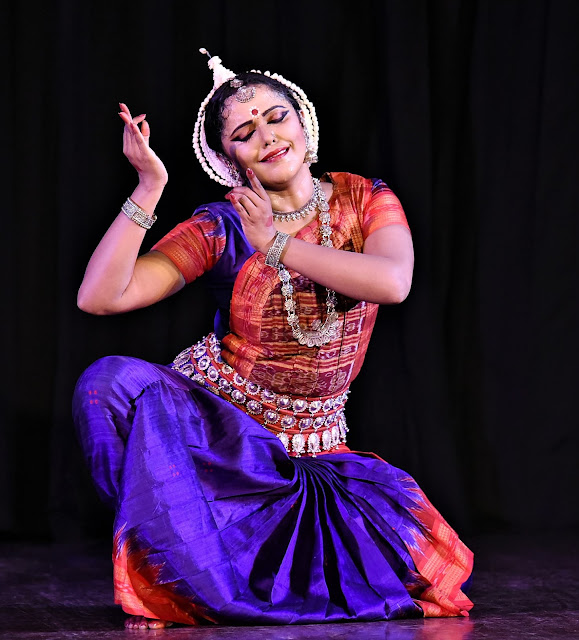 The final piece was about Meenakshi amma, her unparalleled beauty, fish-shaped eyes, parrot in hand. She was a three-year-old girl with three breasts, born of agni to the king Malayadhwaj. She was brought up like a son and was trained as a warrior and a charioteer. But as soon as she saw Lord Sundareshwar, her third breast fell away. The composition was in raag Mallika, taal Mallika. 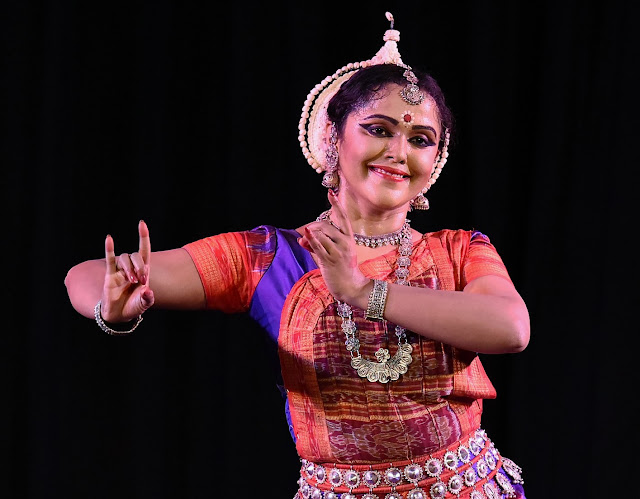 In the depiction, Abhayalakshmi showed the palki of the goddess with the dhwaja moving as the devotees perform aarti. Her beautiful eyes, her locks, kesh alankrita, her sugandh, matsyakshi or fish-eyed, the garland in her neck, ‘keyur-pushpa-alankrita’, ‘valli madhyabhaga’ or the waist around which she wears a ratna mekhala or waistband, ‘pada yugala devi jagantika’, the parrot on her hand or the shuka shyamala. Finally, she is married to Lord Sundareshwar, depicted using the kalyanam and the jhula. 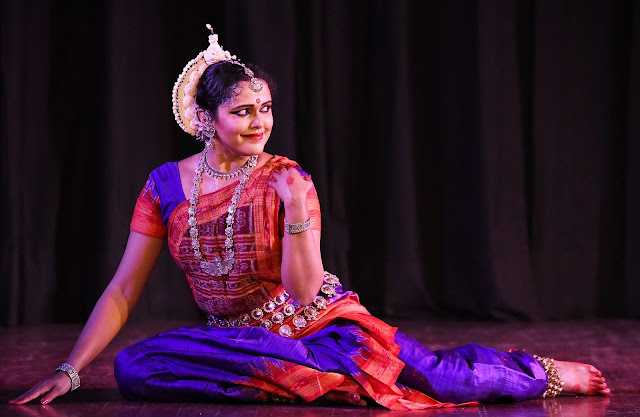