The World Dance Day performances organized by Natya Vriksha this year featured exciting young performers.The Natya Vriksha team curates their Young Dancers’ Festival to give a platform to promising dancers from all forms of dance. Rajashri Praharaj was the first dancer to perform on the first day. She is a senior disciple of Guru Ratikant Mohapatra at Srjan in Bhubaneswar. She began with ‘Jagannath Ashtakam’, an ode to Jagannath Swami. She looked very graceful in a red and blue costume.

Following that, she did a ‘Hamsadhwani Pallavi’. Since pallavi is a nritta piece, it displayed her proficiency in Odissi. Her footwork was very precise as she moved with the rhythm in her tribhanga, her hastas transitioned smoothly, and all this created a very lively scene. Her leg rotations and leg lifts showed her agility. The movements – gentle, subtle, rhythmic and flowing – left a mark on the audience. 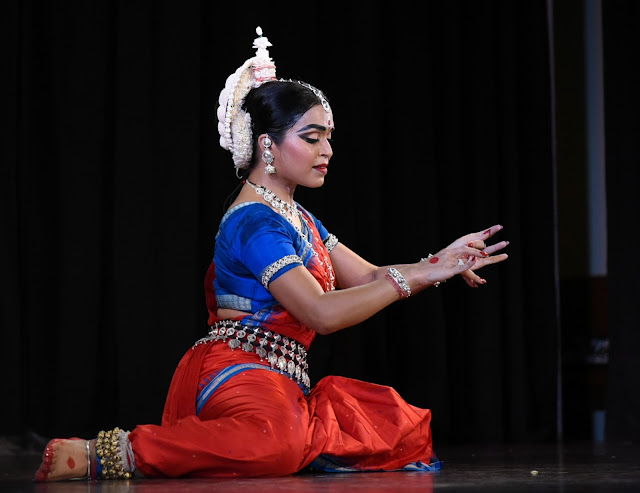 While the first piece showcased her deft nritta, the next piece displayed her talent for abhinaya. This piece was ‘Sitaharan’. The music for this was composed by Pandit Raghunath Panigrahi. The story has been visited many times. Sita was abducted by Ravana from Panchavati when he came in disguise. Here, Rajashri showed Sita in Panchavati, where trees are entwined with creepers. She picks flowers, stringing them for Rama, whereas he is busy pulling the strings of his bows. As Sita comes to Rama to offer flowers and they have a moment of togetherness, the demon Marich arrives in the guise of a golden deer. 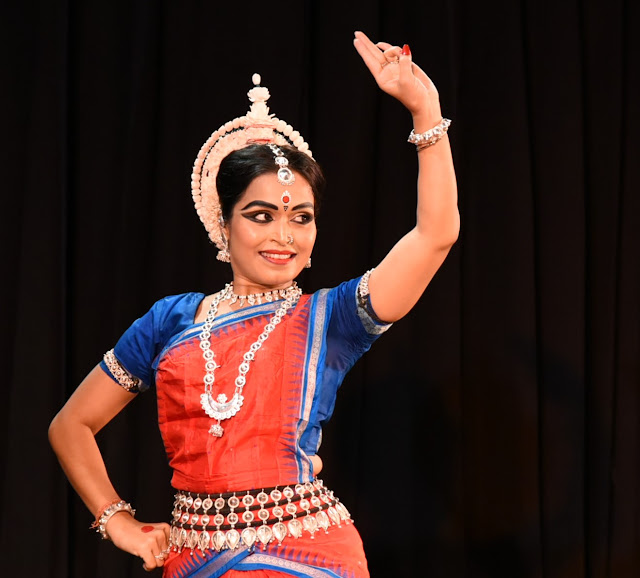 An agile Rajashri showed the sprinting deer with blinking eyes. Sita beckons to the deer, luring it with food, but it disappears. Sita insists on having the deer. Rama follows it bearing his dhanush. Rajashri portrayed each character very gracefully. The demon-deer hides in the forest and calls for Lakshman in Rama’s voice. Sita orders Lakshman to leave and look for Rama, so he draws a Lakshman rekha.

Rajashri portrayed Ravana especially well, showing his attitude and keeping one eye almost shut to show his crooked character. Sita’s indecision was well portrayed as she walks to the Lakshman rekha to give alms to Ravana, who is in disguise. Sita is thus abducted by Ravana. Jatayu’s act was another well-executed portion. She depicted the flight of Jatayu standing on one leg and doing rotations. And when, battling Ravana, Jatayu loses a wing, the pain was shown using writhing movements. He wails for Rama. Sita throws her ornaments to leave a trail. 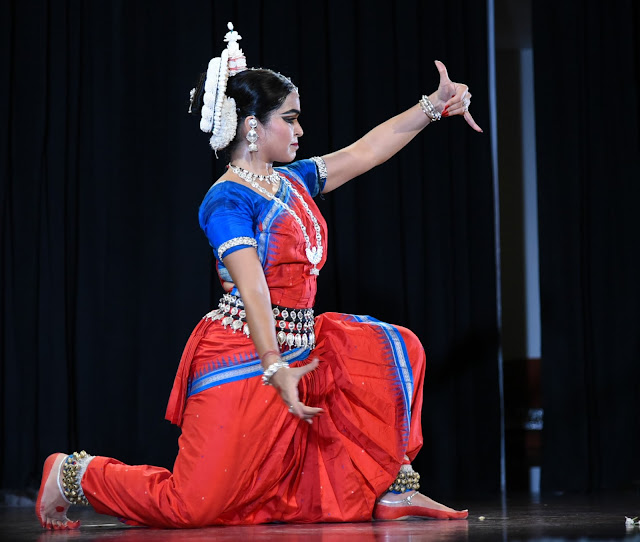 Rajashri has been making her mark with her grace, proficiency in technique and the versatility of her abhinaya, depicting an episode with many characters in a solo. Each character was essayed with apt nritya. Guru Ratikant Mohapatra’s mardala was very impressive. Vocals were by Jatin K. Sahu, flute by Shrinivas Satpathy, violin by Angamitra Behera, and lights by Devi P. Mishra.

The second dancer for the evening was Kathak performer Rupanshi Kashyap, a disciple of Kumudini Lakhia at Kadamb in Ahmedabad. Her humility was reflected in her dancing. She was dressed very subtly in a peach costume. 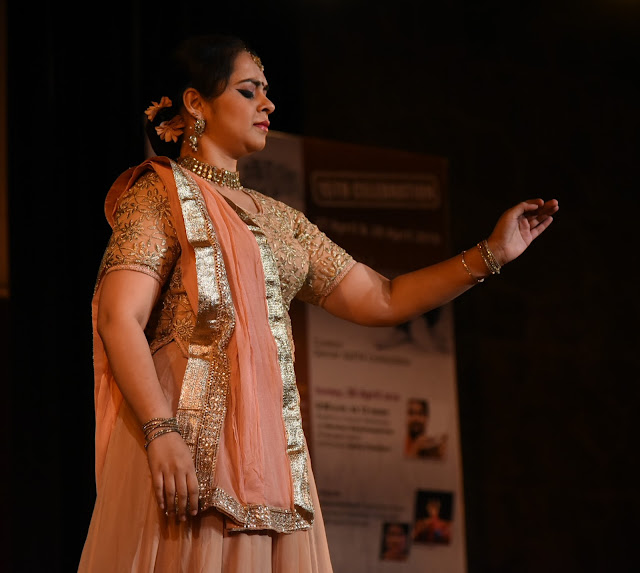 She began with a Ganesh Vandana and a Durga Stuti in Puriya Dhanashree, ektal.The very first beats of her feet produced a thaap which initiated a spontaneous ‘wah’ from the audience. Ganesh was depicted with his ears and other attributes in nritya and then Ganesh worships his mother, Bhavani, as Narayani, Jagadeeshwari, asking for her blessings. The nritta portions used parans, tihais and chakkars. 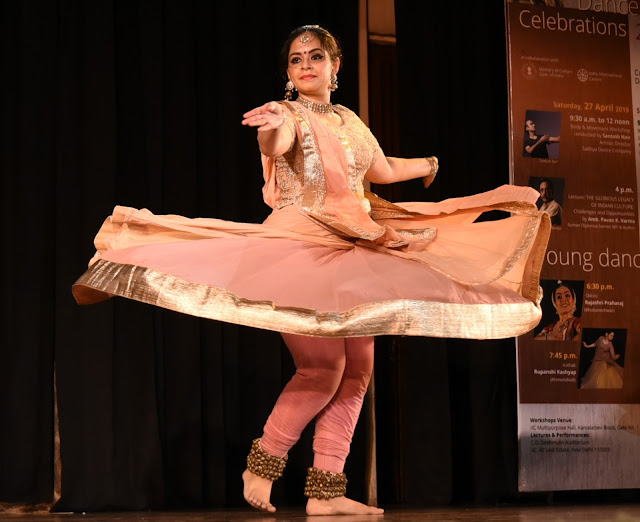 Next, she did a tukda in teen taal, taught to her by Pt. Vijay Shankar ji, in raag Gara. The piece emphasized the use of the left foot, followed by a gat, thaat and aamad. In the nritta portions, she did paran aamad, chakkardar tihai, a bandish in madhya chatusra mishra laya, a tihai which finishes on dha, leaps, tukdas, ginti ki tihai, followed by an abhinaya piece in vilambit in raga Vrindavani. 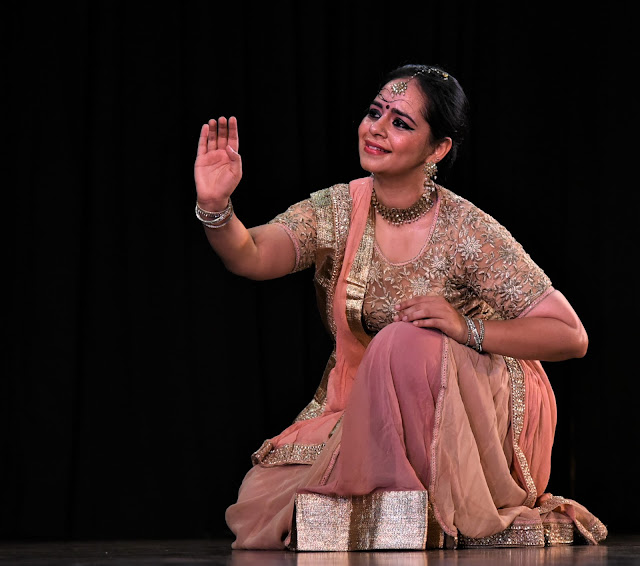 Here, mother Yashoda is looking for her son Krishna, ‘ban ban dhoondan jaun’. She was depicted as roaming the woods of Vrindavan looking for Krishna. She finally catches him, stealthily moves towards him and kisses him. The nritta pieces inserted were chakkars, aamad and tez aamad. In the last piece, she did teen taal in drut laya, performing a tez aamad, a tihai and a baat-cheet of footwork with the tabla player. 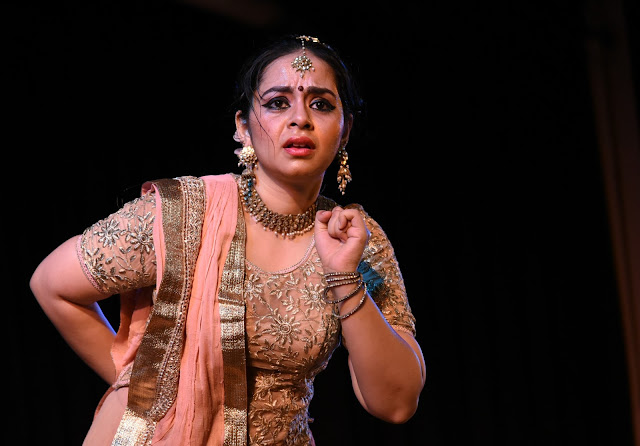 Kumudini ji has produced various excellent dancers in Kathak, and Rupanshi too is carrying on that name. Her nritta was very agile, expansive and neat, with well-finished movements and a lot of agility and grace. Even the slow abhinaya piece was done well. The tabla was by Joby Joy, vocals by Prahar Vohra, sarangi by Vanraj Shastri, on padhant was Mitali Dhruv and Sandeep Dutta on the lights.

She looked very bright in a yellow and pink sari. In her performance, she did a virhottam in raag Karaharipriya followed by a varnam, ‘Mohamanam’, in raag Bhairavi aditalam. This beautiful piece brings out the pain of the nayika when she is waiting for Lord Shiva. 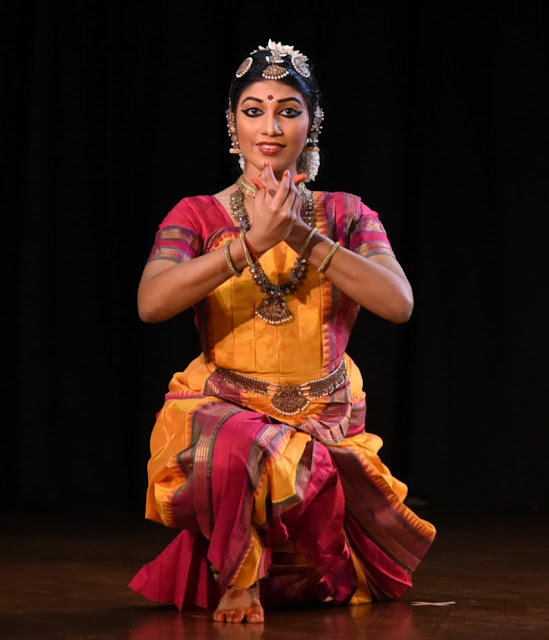 In her depiction, Manasvini showed the Ganga flowing from his jatas as she craves a touch of his lotus feet. Bees hover over the lotuses and the cuckoo sings gaily, worsening her pain. As she burns in viraha, she applies chandan to alleviate her pain. Why is he so harsh on her? Why does he ignore and reject her overtures? The procession of the lord was described as proceeding towards the temple, which has pillars, geometrical patterns on the floor and ponds blooming with lotuses. Finally, she laments that Manmatha is striking her with his arrows and in her pain, she asks for union. The lord then relents. Manasvini very subtly and sensitively executed the abhinaya. 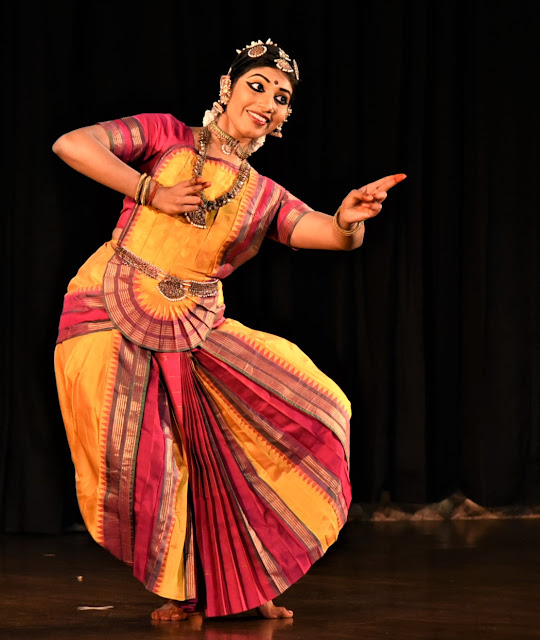 Her jatis had pace, leaps and stage coverage using all directions. She ended her performance with a shuddha  nritta piece which is based on temple art where the rhythm is predominant. The rhythm comes from the ankle bells and the mridangam, something like a baat-cheet in Kathak. As the jathis were played on the mridangam, the dancer replied by repeating them in her footwork. 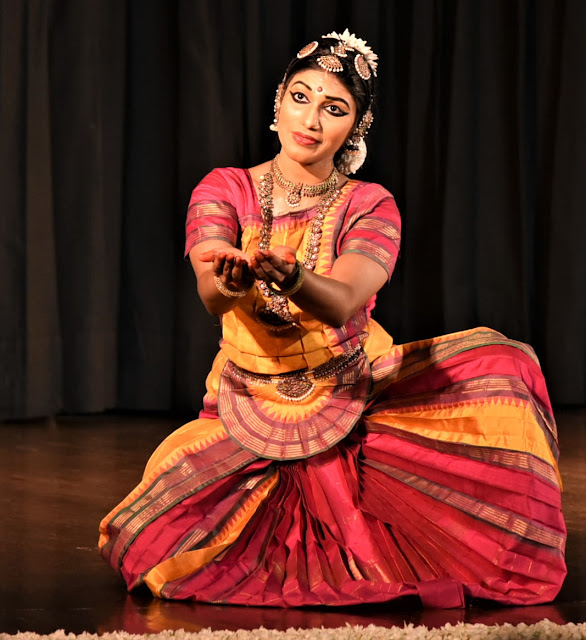 Later, Manasvini spoke to me about the shudha nritta piece. “Shudham nrityam has been a very old tradition in shodash upchar where it was said, ‘Geetam samarpayami, vadyam samarpayami, nrityam samarpayami.’ This involved a lot of karanas. Mangudi Dorairaja Iyer, who is my mother’s guru, revived this art form, where the mridangam and the pada pattams are the only sounds. It is samarpan to ishwaram. There is no story, no expressions and no abhinaya. It is like a tani avartanam. Usually, in a kutcheri, there is a 5 to 7 minute piece that is totally assigned to percussion, usually the mridangam, ghatam, kanjira and morsing. The tani avartanam means tani is rhythm and avartanam is one cycle of talam. The mridangam tani avartanam is very common even today. It is like a question and answer between the ghatam and mridangam. So it is not a practice common only in the north. It became niche. Everybody says this is like Kathak, but it is there in Bharatnatyam as well. Anybody who knows Carnatic music will know about this. The ghatam or kanjira artist will try and mimic the mridangist. And it does not need to be practised - whatever you need is already there. I am a very intuitive dancer and it comes to me naturally that I match the mridangist,” she said. 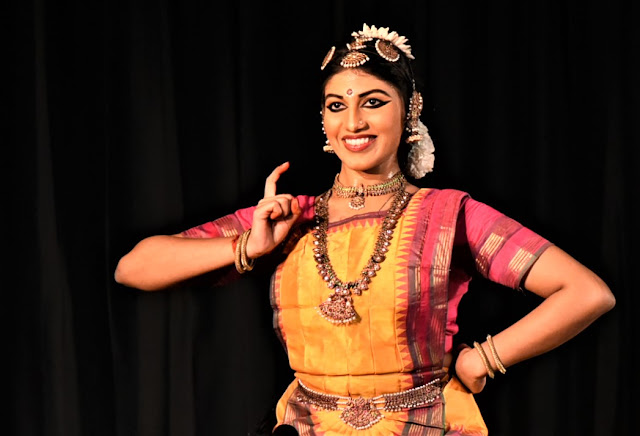 On nattuvangam was Sridevi Jayakrishnan, S. Venkatesh on vocals, Bhardwaj Guru on mridangam and Sujith Narayan on flute.