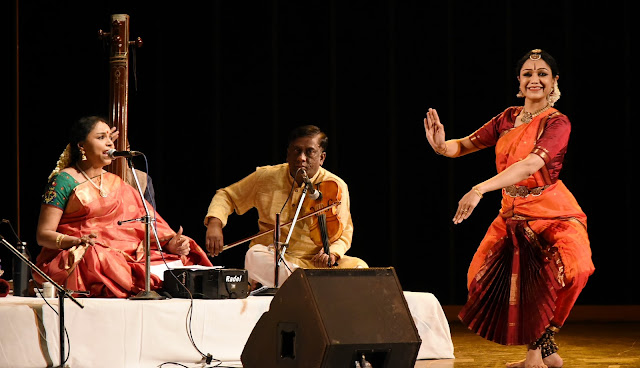 Samadrishti was an event in which two stalwarts of their art shared and presented the same vision. Sri Hayagreeva and IHC presented a concert on the 25th of November in Delhi as a tribute to Shri ML Vasanthakumari, a great vocalist and musician and the guru of Padma Bhushan Sudha Ragunathan. It was held to commemorate MLV’s 90th birth anniversary. The concert had Rama Vaidyanathan dancing and interpreting the songs sung by Sudha. Samadrishti, the title, appropriately sums up the vision that the two performers had for the compositions and the awe that the two inspired in the audience. 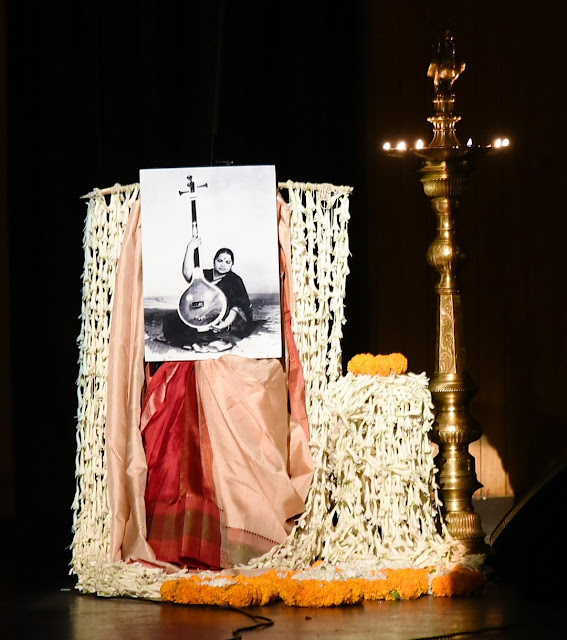 ML Vasanthakumari, or MLV, was one of the greats of Carnatic music in her lifetime and was referred to as one in the ‘female trinity of Carnatic Music’. ‘A prime disciple of G. N. Balasubramaniam, she was the youngest among the established musicians of that era, and was the youngest female awardee of the Sangita Kalanidhi award,’ according to Wikipedia. She was as well-known for her ragam-tanam-pallavis and use of little-known ragas as for her playback singing.

Ragunathan is one of her well-known disciples and one of great contemporary composers and vocalists of Carnatic music. Sangeet Natak Akademi awardee Rama is a disciple of Yamini Krishnamurthi and Saroja Vaidyanathan, and is an established performer and guru with a style of her own.

The concert began with a composition which was an ode to all mothers, then to Goddess Saraswati, in raag Hindolam, aditalam. Sudha’s voice is a blessing of the goddess she was paying an ode to. ‘Ya tushar ya veena ya shveta ya padmasana deve sada poojita’ were the words sung for Goddess Saraswati. 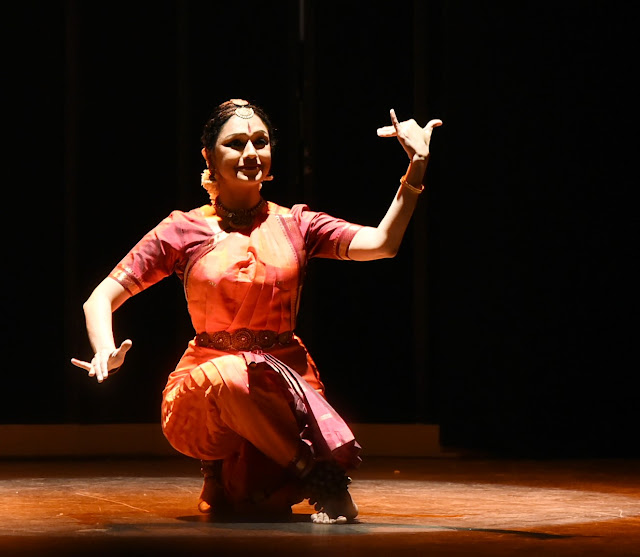 Rama took the posture of a squat with the veena hasta to depict the goddess - ‘komal kar saroj krit veena’ - depicting the swan as the steed. ‘Rajeev nayan shobhit mala’ - the gestures and postures by Rama were very graceful, and the footwork was perfect in the nritta.

‘MLV amma’, as Sudha called her, was also very famous for her film songs, which ran parallel to her classical music, since those film songs also had many classical elements. The song chosen for the evening was appropriate for the theme ‘samadrishti’, describing the dancer and the singer having great admiration for each other. They appreciate each other’s talent. 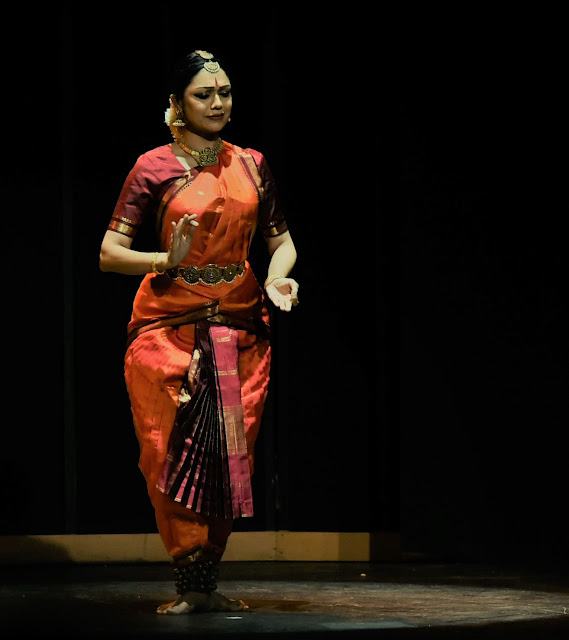 In the next song, a lot of imagery of shringaram was used. Rama depicted the nayika making a jhula to swing on, her lotus eyes beautiful, her tinkling bangles teasing and her beautiful lips like the fruit of the bimba, enchanting. As she sees birds and the bees on the lotus, she feels the romanch or goosebumps. Rama’s dance was very lissome all throughout, with gentle leaps and footwork. 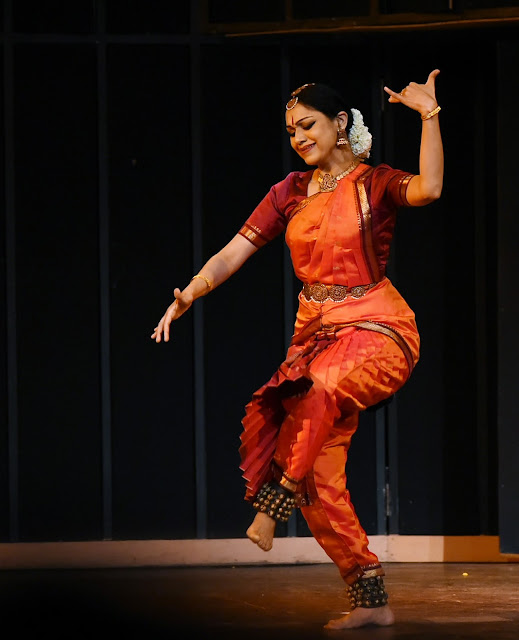 The following piece was a pallavi which began with the melodious notes of the violin. It was a ragam-tanam-pallavi in Karaharipriya in a ten-beat cycle. The pallavi was dedicated to Lord Shiva or Nataraja. The iconography of Nataraja is elaborated in this pallavi. He holds the damru in the raised right hand, agni in the left. The lower right hand is the abhaya hasta, and the left foot and left hand face the cosmos. The right foot is on the demon who symbolizes evil. The left hand points in the cardinal direction, towards the demon under the right foot. The aalaap taken by Sudha was consummate and as you were being soothed by Sudha’s notes, Rama’s movements left you awestruck. 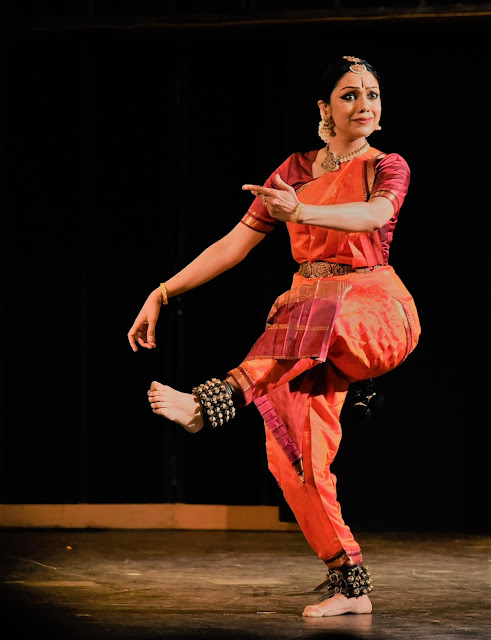 Through leaps and very expansive movements, she depicted the snakes, the right hand showing the movement of the damru. ‘Sarvesha jagadisha,’ the lyrics said. Agni in the left hand, she moved in a broad plie. The stances, postures and gestures were without parallel. She depicted the right foot on the demon and the left in the dancing position. She depicted the left hand in the mushti mudra and the right hand pressing it down, that as you suppress the demon of your abhiman, your soul rises. The dance went on to depict the half moon on Shiva’s head, his jata and Nandi as the steed with swaying movements, Shiva playing the mridangam and Nandi looking at him, the snakes wrapped all over his limbs, Ganga on the knotted jata. The movements were very powerful and the dance, with the hourglass drum or damru, depicted the gait and abandon of Shiva. 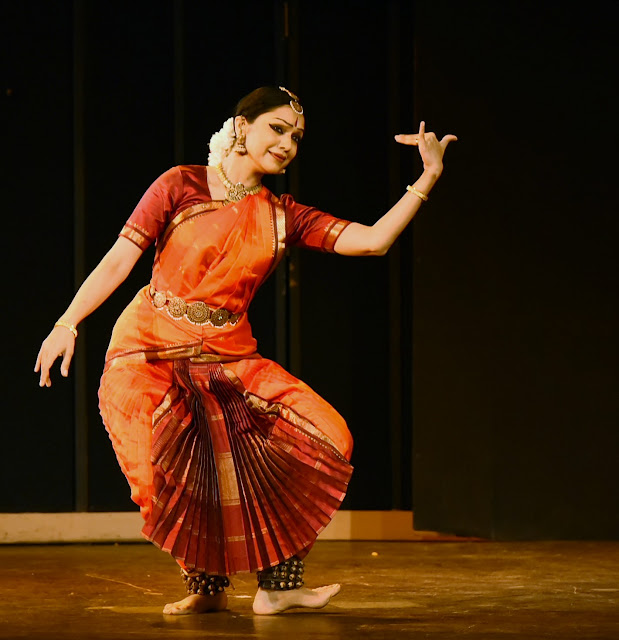 The fourth piece was a padam in raag Tilang, roopaktalam, composed by Annamacharya. The piece is about goddess Alamelu Manga coming out of the chambers of the Lord after a night’s dalliance. Her body is an open letter of love, with all the happenings of the night written on it. It’s an unabashed declaration of love. Her sakhis, who look at her as she walks out, are trying to read the signs of love on her body. The little kasturi on her lips is from the lovemaking, but she says that it is the kasturi she applied on the lord and got on herself by mistake. Her eyes are red from staying up in the night, but she says it is from planting them on him, and the drops of perspiration on her face are the perspiration that got sprinkled on her during their passionate lovemaking. It was Sudha’s singing that brought out the sensuousness in the piece. 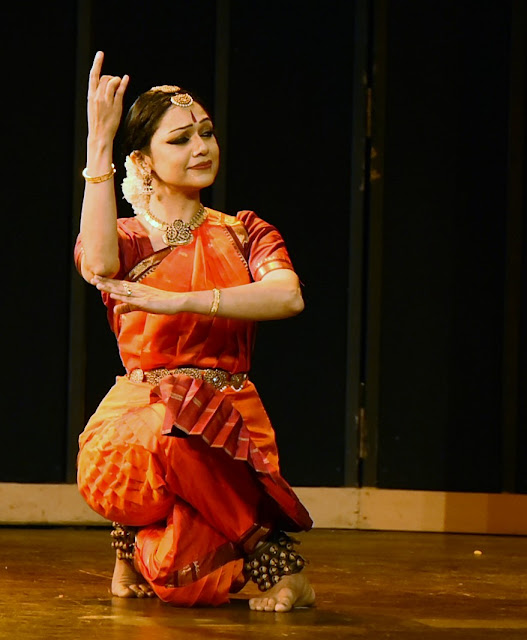 Rama’s depiction of the sequence was a mirror of her proficiency in abhinaya. The friends who see her coming out gossip and whisper, nudging each other, and the depiction of the goddess as she comes out and sees her friends looking at her, appearing nervous, furtive and shy, trying to hide the telltale marks, was beautifully evocative. The sakhis truly have a tongue-in-cheek kind of attitude and you could see Rama actually rolling her tongue sideways. The goddess’ eyes are red, chakorakshi, like the bird’s, which were depicted through fingers, a testament to a night spent without sleep. As she clung to him like a creeper around a tree, his perspiration got sprinkled on her and is a letter of their passionate lovemaking. She modestly tries to wipe the telltale signs. The singing and its portrayal really got into the nuances of the piece. 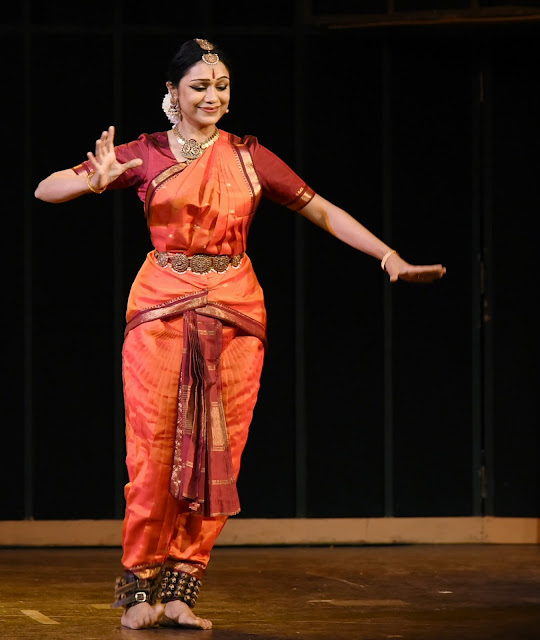 The next piece was an ashtapadi by Jayadev. The composition was in raag Mallika, with Mohanam, Vasantha, Yaman Kalyani and Sindhu Bhairavi, which was a tune by Shri Seetaram Sharma, but as Sudha explained, MLV amma changed the Vasantha to Gawathi or Gaoti. Rama depicted the ashtapadi, ‘Pashyati dishi dishi’. The ashtapadi was preceded by the singing of the shloka ‘Kasturi tilakam’. The notes that Sudha took for the shloka went deep into one’s soul. Rama depicted the kasturi tilakam, kaustubh mani, nasagare moti, kankan in hands, gopal parivesh gopal chudamani, that is, Krishna with his cow. The ashtapadi describes Radha seeing Krishna in raas leela with other gopis. She is deeply hurt and as she sits alone, she cannot help but recall his beauty. She asks the birds not to chirp and to listen to his flute, playing melodiously. The radiance of his ear ornaments or kundal, which are blinding. His curly hair, the mayur shikhi pichha or the peacock feather, depicting the gentle gait of the peacock. The embrace they were entwined in. As she ponders all these, Radha’s viraha is enhanced and tears well up in her eyes. Rama portrayed the emotions very expressively. 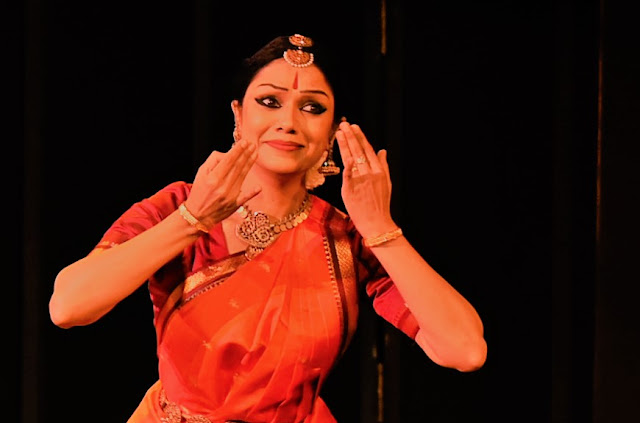 The following piece was a Haridas pada. Sudha explained that MLV amma sang tukdas, Haridas padas and abhangs. In her book, she wrote the notations of about 50-60 dasar padas. She was a persistent learner. The Haridas pada she sang was ‘Deenanath bandhu’. The devotee pleads to the Lord, the karunamaye sindhu, deenbandhu, that he alone is his refuge. Rama could convey the infectious pain of the devotee at the lord’s feet. The tale of Draupadi’s cheer haran was depicted here. Also depicted was Ahalya, who was turned to a rock, and who was endowed with blessings and mukti by a touch of the foot of Lord Rama. Purandardasa calls on the lord to shower his blessings on him. Rama depicted the seva of the lord, applying chandan, tying the dhoti, and the shringara on Vitthalrai. The abhinaya was very emotive, depicting the longing of a bhakta. 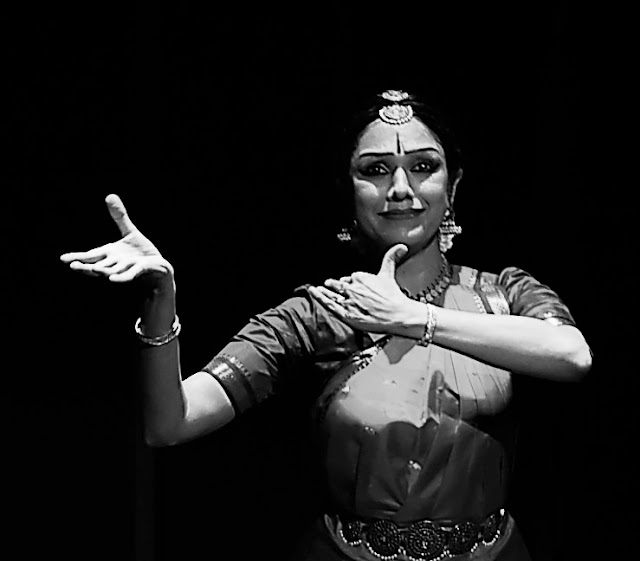 The final piece was a Tamil version of Vande Mataram by Subramaniam Bharti. The piece captured the emotion mirrored in the refrain of a film song by MLV, that everything around you is beautiful – the rising sun, the animals, the plants, everything is beautiful and it is upon you to see that beauty in all. Rama began in a kneeling position as a seed, and then blossoming into a tree, branching. The flying birds, the peacocks, the fish in the water, the mountains, springs of fresh water, the scent from the flowers, the sun’s rays, depicted by quivering hand movements, the blossoming lotuses, the elephants, depicted through the ear movements and the gait, the small insects, the dust from Mother Earth and after a short spell of nritta and bols, she took the posture of Bharat Mata. They began with an ode to the mother and ended with an ode to the motherland. 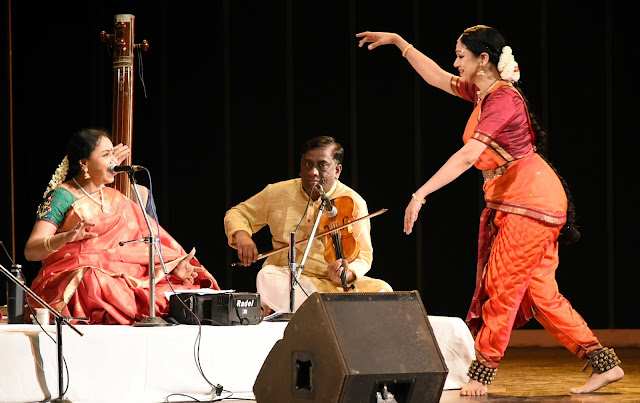 When two titans come together, it is usually for a duel. But here, the two titans got together to create magic which made you forget not only your ego, but also to rise to transcendental heights. Sudha’s soulful singing moved you and got paired with Rama’s portrayal, which was very emotive. The performance left the audience spell-bound. Accompanying them were Raghavendra Rao on the violin, Subodh Shridharan on the mridangam and Diwan ji on the tanpura.