Kuchipudi, Odissi and Kathak duets by young dancers in Samasrava

On the 24th of November, Samasrava was presented by Manasija at Triveni Kala Sangam in Delhi. The guests of honour were Pt Birju Maharaj, Gurus Radha, Kaushalya and Raja Reddy, Guru Sharon Lowen and Guru Monalisa Ghosh and Shri Avinash Pasricha, who was also taking pictures for the event. The stage had Lord Jagannath and Nataraja idols, where the gurus offered flowers. ‘Samasrava’ means a gift of god. Here, three forms of dance were brought to one platform, with duos performing.

The first pair of dancers was Arunima Ghosh and Madhur Gupta, in Odissi. They started with a mangalacharan, an ode to mother earth and Devi Saraswati, ‘Manikya veena’. Goddess Saraswati, also known as Matangi, plays the veena, is four-armed, with the moon in her hair and elephants at her side. The choreography for the piece was by the legendary Guru Kelucharan Mohapatra. The two wore complementing costumes in yellow and red. The piece the dancers chose depicted Saraswati playing the veena in a half-squat. The attributes of the devi as chandrakala, avatanse, kuchokumarag, kalyani, nilotpale, sangeetrasike, were depicted through stances and gestures. The portrayal was very graceful, with nritta interludes. 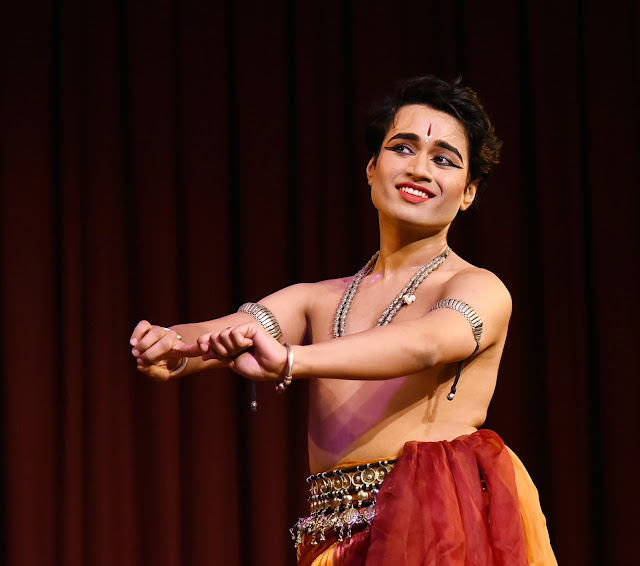 After that was a solo piece by Madhur, a champu, a traditional Odiya poem in which each line of the verse begins with the same letter, in this case ‘jha’. Krishna is bedazzled by Radha’s beauty and looks for her everywhere. The sakhi who is looking for him asks the birds, the calves if they have seen him anywhere, and she finds him lying like a wilted flower in the viraha of Radha. She coaxes him to get up, and chides him for his helpless despair in separation – he who has won over Madana and danced on the hood of Kalia – so he must rise and go to meet Radha. Madhur emotes very expressively in this piece, with a lot of despair in depicting the condition of Krishna, and the annoyance of the sakhi, who keeps coaxing Krishna, all the while performing her chores, to get up and come with her. 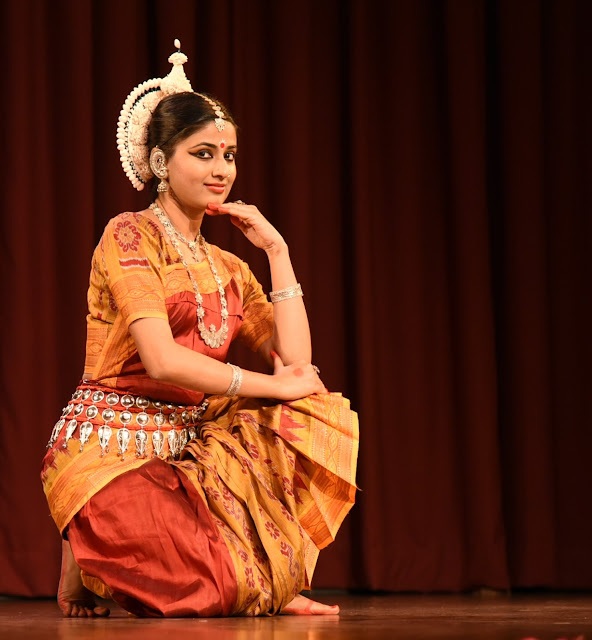 Arunima’s solo was a Jayadev ashtapadi, ‘Yahi madhav, yahi Keshav’. The dance composition was again by Kelubabu. Here, Radha is the khandita nayika. Krishna comes to her door after a night’s dalliance. Arunima depicted the nayika looking for Krishna with a diya in her hand, protecting it from the wind, just as she is keeping her hopes alive that he will arrive. She finally puts it down and dozes off. At the break of down, Krishna shows up at her door. He is dishevelled, his morpakha scattered, and he smells of another woman. He shows signs of drowsiness from staying up the night before, yawns, stretches, his eyelids are heavy, and Radha gets annoyed at seeing him. In her anger, she tells him to go away and go back to the other woman. Krishna is trying to cover up by wiping the lip marks on him and tells her that the scratches on him are from the branches of trees. So she touches his feet and asks him to leave. Arunima’s abhinaya was very subtle and portrayed appropriately the misery of the nayika. 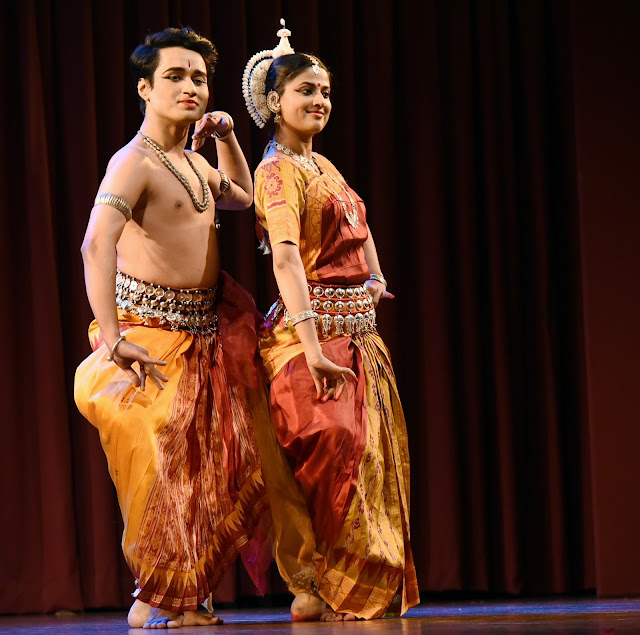 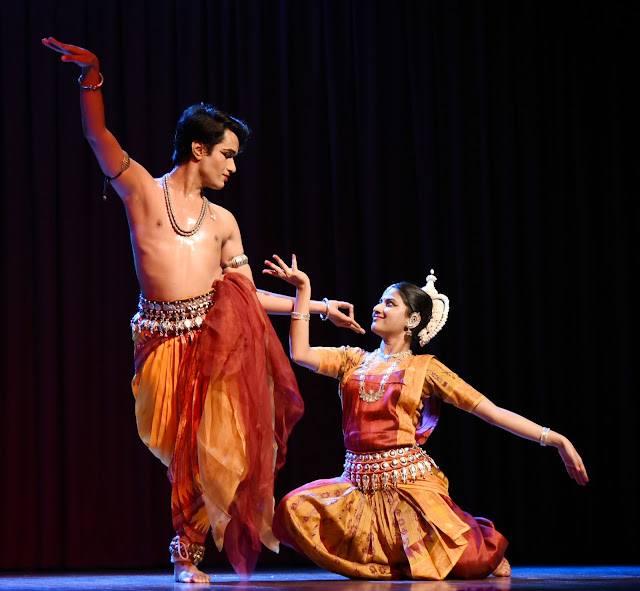 Finally, Madhur and Arunima presented a pallavi together in raag Aravi, ektaali, a composition of Kelubabu. On one hand, in their solos, they had exhibited their technique in abhinaya, and here, they showed their excellence in nritta. Their coordination was excellent, moving and circling in opposite directions. The fluidity of their chauka and tribhanga, footwork, squats, all were presented well. On one hand, Madhur had the energy and pace of a male dancer, and Arunima had a lot of feminine grace and fluidity in her movements. 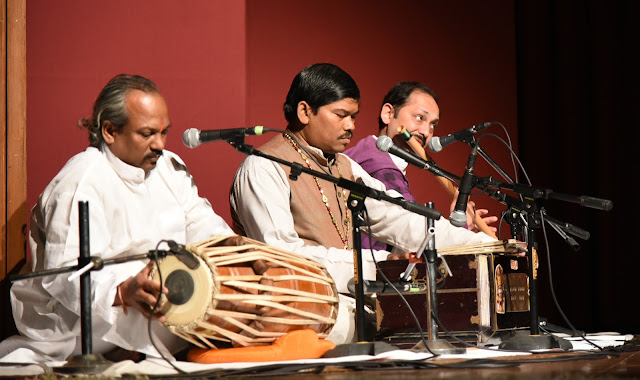 Accompanying them on the mardala was Guru Prafulla Mangaraj, with Sukant Nayak on vocals and Dheeraj K. Pandey on flute.

Next were the famous Reddy sisters, Yamini and Bhavana, in Kuchipudi. The sisters have been endowed with great genes, being daughters and disciples of Raja, Radha and Kaushalya Reddy, to which they have added their own aptitude. The performance that day was ‘Shivaleela’. They began with a Ganapati vandana. Shiva as Nataraja and Parvati dance together and mesmerize the universe with their tandava and lasya elements. 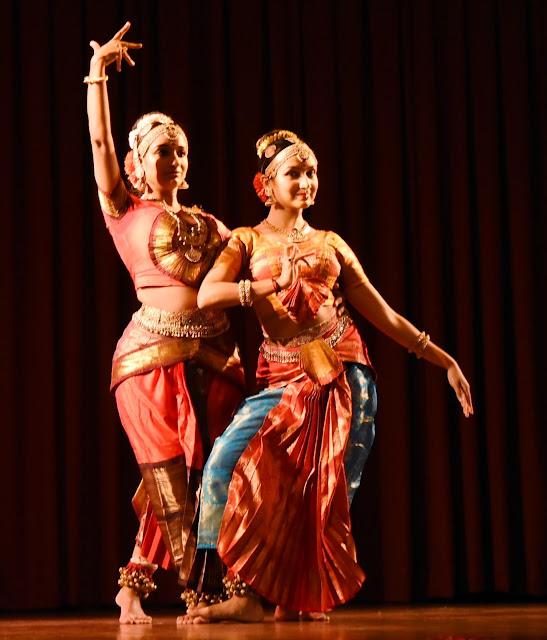 While Yamini had a red and brown costume, Bhavana had a turquoise and magenta one. Shiva is the supreme being, ‘Shambhu param Shiva’. The composition was in raag Mallika, misra chapu. The lyrics enunciated the attributes of Shiva, which Bhavana and Yamini depicted – 2‘neelakantham, umapatim, shambhu, sadashiv, shankar, bhavabhay nashanam, gambhir, swayambhu’. He is the lord of janma, sthiti and sanghar. In one hand, he carries the hourglass drum or the damru, and agni in the other. The nritta portions had neat hastas and footwork, leg rotations and powerful movements. The two together took stances and postures for Shiva and Parvati, and finally, they took a stance with Yamini in a squat and Bhavana behind, as Shiva and Parvati. 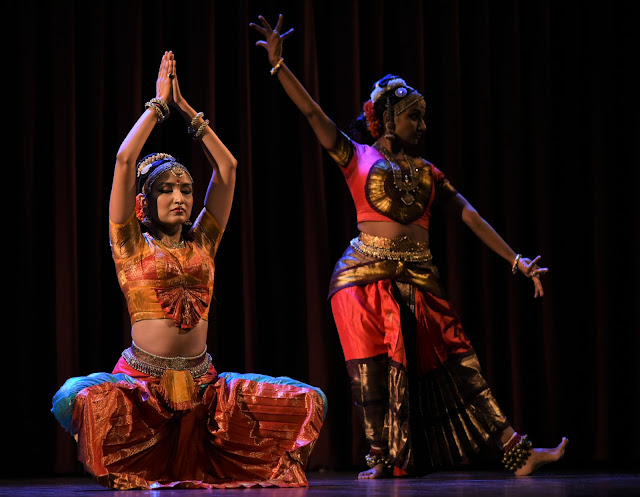 Shiva is Neelkanth, since he drank the poison during the sagar manthan, and holds it in his throat. Yamini’s depiction of gulping the poison is worth a mention. Markandey rishi was an ardent devotee of Shiva, but was destined to die young. As he is performing pooja for Shiva, with chandan, tilak, pushp and aarti, Yama comes to get him and Shiva saves him from the hands of Yama. Thus, he is called Mrityunjaya Shivakara. 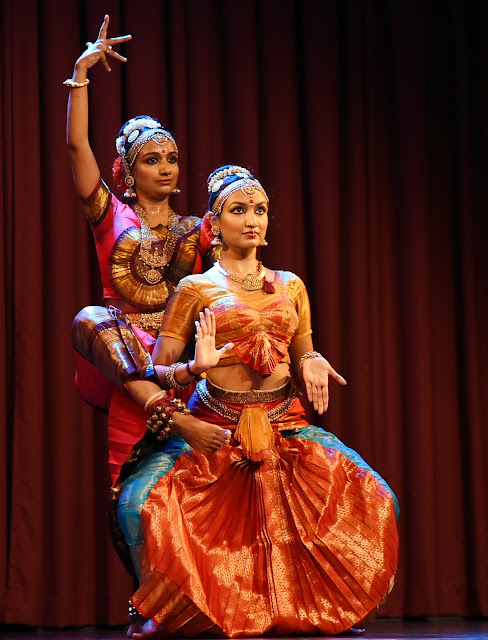 Yamini again here depicted the raudra roop of kaal. Shiva was performing tapasya, and Manmatha tries to disrupt it, using all his arrows on Shiva. Shiva finally open his third eye and turns him to ashes. Hence, he is called Madanantaka Shivakara. Bhavana as Manmatha did a very expressive act. Parvati is in tapasya, and Shiva comes as a hermit to test her. The hermit tells her to leave Shiva for him, for he says that Shiva is dirty from the bhasma, snakes and his jata. As he tries to come close to Parvati, she assumes her powers with trishul and tells him to go away. Shiva removes his disguise and they have a kalyanam, and so he is called Umadipataye Shivakara. This act was done by both the sisters with some wonderful mukhabhinaya and gestures. 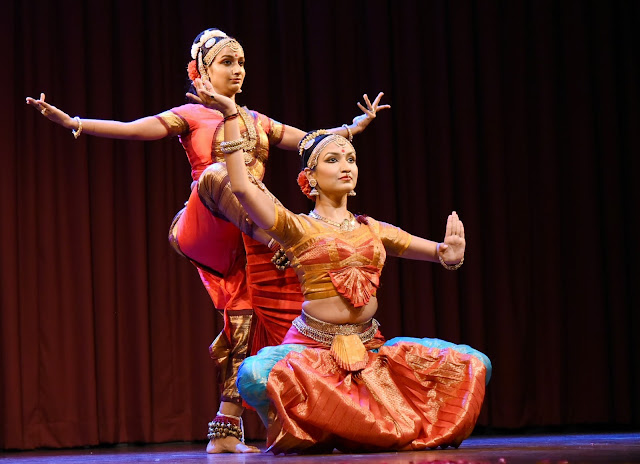 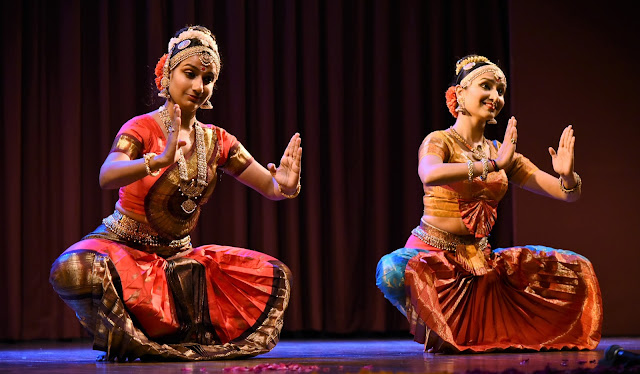 In the next episode, Arjun performs tapasya in the forest when an animal comes to him, and is hunted down by Arjun. Shiva comes to claim it disguised as a hunter. Arjun and Shiva fight, and Arjun wins, and so Shiva is called the Kirat Shivakara. Tripurasura is the big-eyed demon, portrayed by Yamini, who defeats the devatas. Finally, he is vanquished by Shiva when all the devatas come together as the bow, string, arrows, horses, wheels, chariot and charioteer. Both Yamini and Bhavana did a formation of a chariot. Shiva is then known as Tripurantaka Shivakara. The amazing part of the performance was the stances that the two took during the depiction, adding the tandava and the lasya elements. Two amazing stances by Yamini had her hands spread out and leg lifted in the ‘Mayuralalita Karna’, and that in which she is reaching upwards towards the sky, the ‘Vishnukrantha Karna’.” 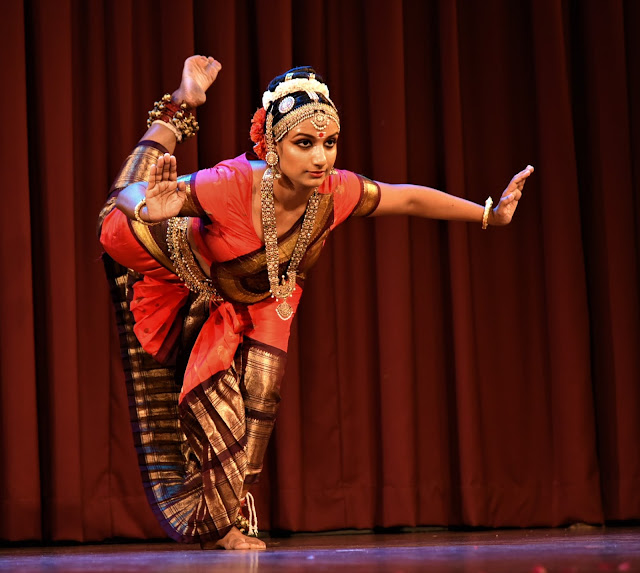 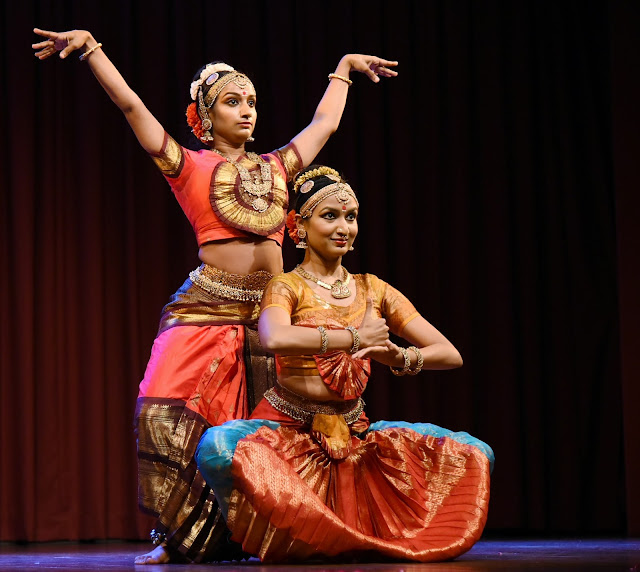 Explaining the presentation, Yamini said, “Shiva Leela is a piece choreographed by my parents Raja and Radha Reddy. It was first choreographed and performed by them decades ago and they were famous for it. The choreography is woven around the various miracles Shiva has performed for his bhaktas. Ten episodes set back-to-back, starting from his emergence as the lingam, his marriage with Uma, to the destruction of Tripurasura, followed by him dancing as Nataraja, the cosmic dancer, with his consort Parvati. Most of the stances taken by me in the piece are inspired by the 108 karnas of Lord Shiva which are carved in the Chidambaram temple and explained in detail in the Natya Shastra. Some of our duet stances have been picturesquely choreographed by the gurus to suit each episode’s story. The final stance we took is of Shiva and Parvati in unison, with Shiva in tandava on the right and Parvati in lasyangam on the left.” 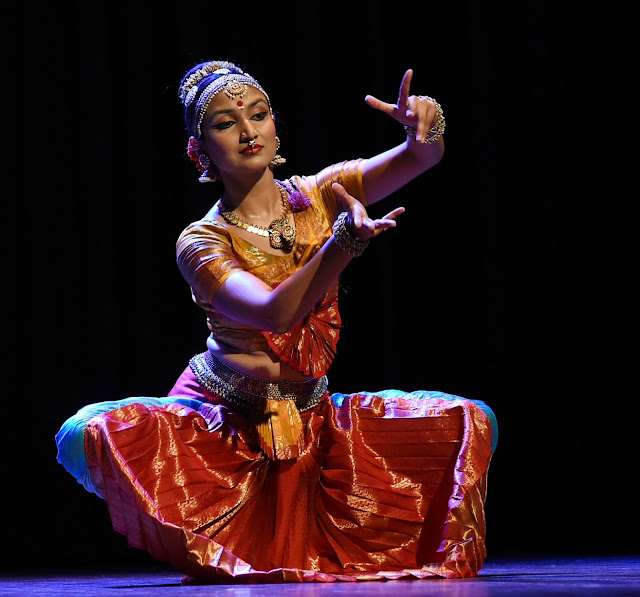 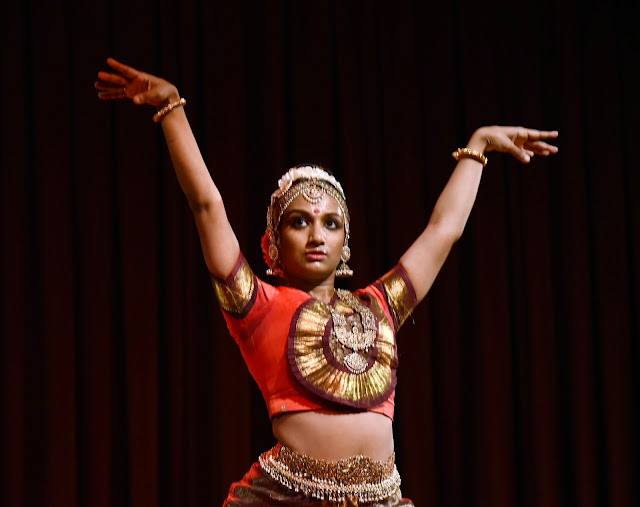 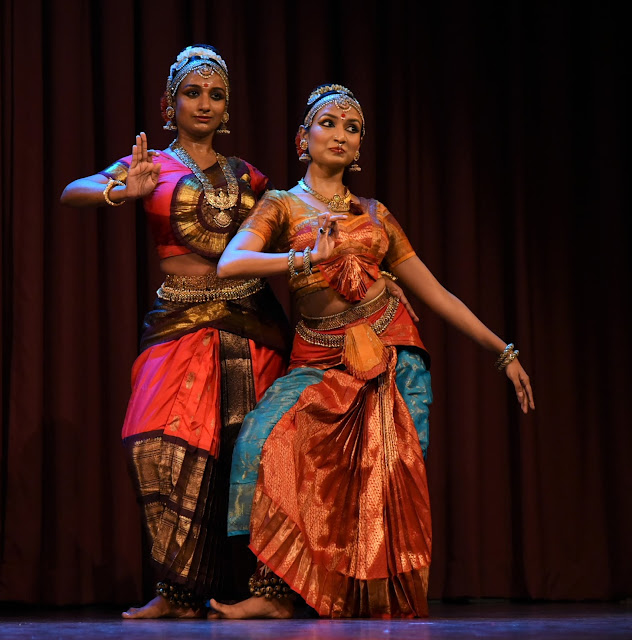 Elaborating on the lineage of the piece, Bhavana explained, “The choreography was by my parents Raja Radha Reddy to a musical piece given to him by N.S. Srinivasan (then music producer, AIR, Hyderabad) in late 1980s. They performed it for the first time and everyone was stunned by the sheer beauty of the music composition, seamless storytelling, strong dance choreography and its implementation, of course. This piece went on to be Raja Radha Reddy's most coveted pieces and is truly one of a kind, representing Kuchipudi’s elements perfectly. They then went on to perform it all over the world – 17 cities in Germany and all of the US. Yamini akka and I particularly picked it up from their performance at the Savai Gandharv Pune Festival 1992 and there was no looking back for us. We have performed it a handful of times now and each time, it is applauded jubilantly by enthusiasts of all ages and background.”

The final duet was between Ragini Maharaj and Tribhuvan Maharaj, she the daughter of Deepak Maharaj, he the son of Jaikishan Maharaj, and both grandchildren of Birju Maharaj. The first piece they presented was ‘Ardhanarishwara’, Shakti and Shiva, depicting the amalgamation of the male and female elements. During the depiction, they showed the bhasma, Ganga, bhalachandrama, ardhamohini roop, bindi bhaal, naag as kundal, sheesh jata, gangadhar, baghambar dhar, and Parvati as motin maal, noopur jhanakar, Shiva as holding the damru and the trishul. The two wore red and orange costumes with complementing colours. 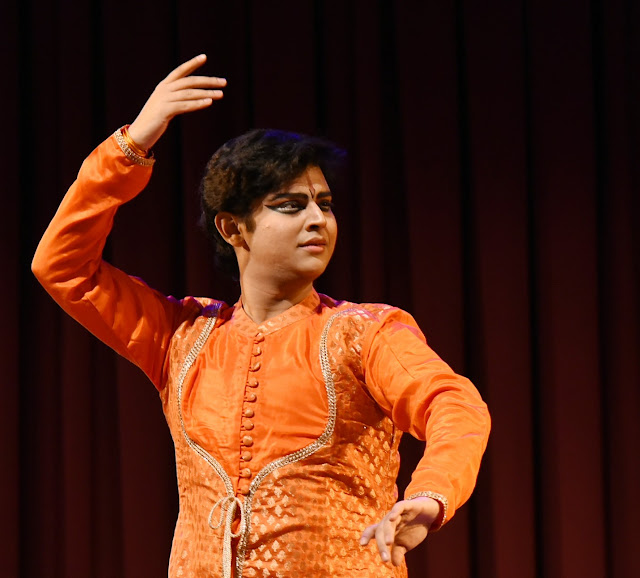 In teen taal, they presented upaj, thaat, uthan, meend ki paran, vilambit mein ladi, tihai, ta pe taali, sarp ki gat, parmelu, bandish, gend ki tihai. A very interesting piece was the saanp-seedhi ki tihai, where they depicted the snakes and ladders, ginti ki tihai, dhoondhne ki tihai, ghoonghat ki gat, paran and tihai. The two had very polished technique and excellent coordination with each other. Their energy and stamina were such that they were still not finished with presenting special items of their gharana. 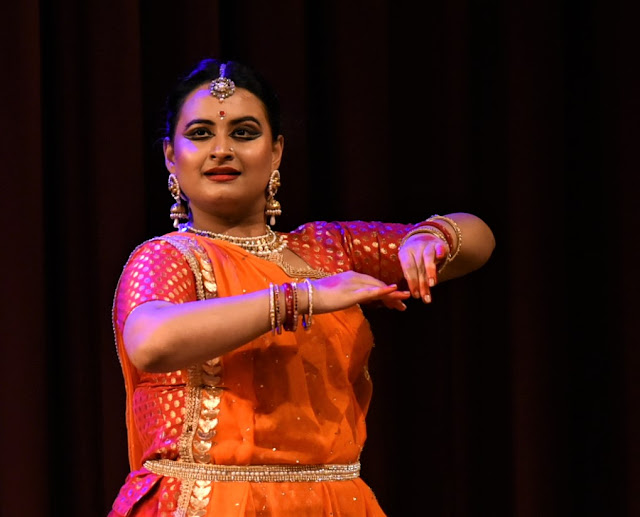 On padhant was Deepak Maharaj, with Pranshu Chatur Lal on tabla, Jayvardhan Dadheech on vocals, and Shyam Rastogi on sitar. 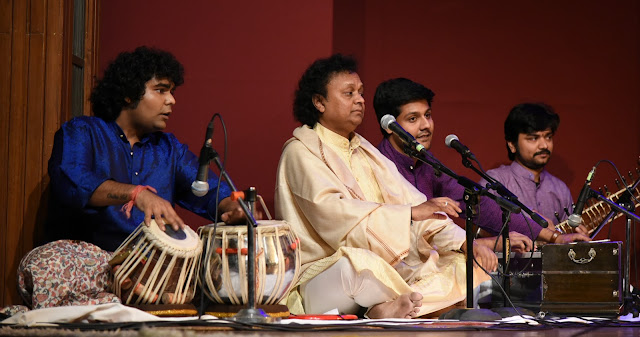