Confluence of Kathak, Kuchipudi, Odissi and Bharatnatyam in Ganga to Kaveri

This performance was held at the IHC in Delhi on the 16th of May. India is a land of many rivers. Right from the north to the south, these rivers flow all across India. They are worshipped all along their course as the mother goddess, or Ma, since they are life-givers. They denote the unity despite the diversity in India. The performance showed not only the confluence of rivers, but also the prayag of different dance forms in India, and the respective gurus teaching them. The call of the times is to protect each of these revered rivers and, thereby, the rich heritage of our culture. Water is one of the five essential elements of our existence, and if we neglect it, we will not be able to survive. 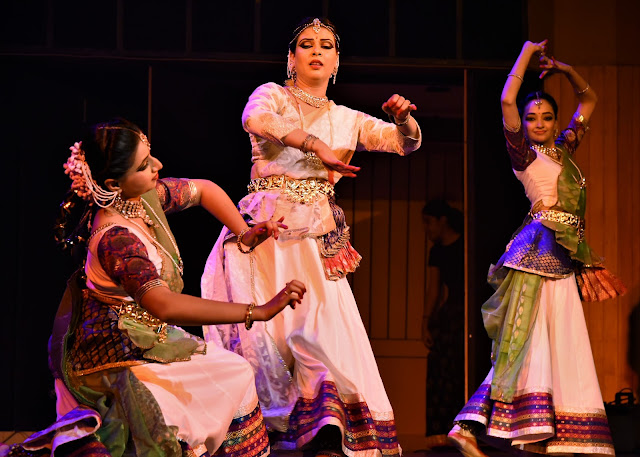 The presentation was conceptualized by Churchill Pandian from Chennai. Sandhya Shrivastav compered the performance in her very poised style. Pandian said, “My friend Chithra Madhavan is a historian, who has done the research. She brought in the traditional story and song based on each river. We have tried to incorporate the folk and regional music associated with each river too.”

The first shloka was for all the rivers – ‘Gange, Yamune chaive Godavari, Saraswati, Narmada, Sindhu, Kaveri jalasmin sannidhim kuru’. The first river to which an ode was sung and danced was Ganga, choreographed by Guru Geetanjali Lal in Kathak. 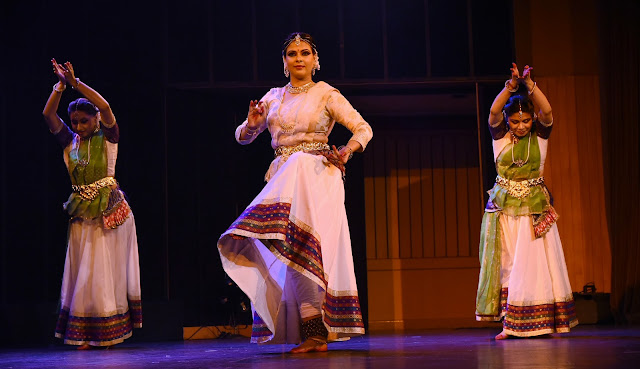 The Ganga originates in the Himalayas in Uttarakhand and, flowing through the plains of northern India over more than 2500 km, empties into the Bay of Bengal as two separate rivers – one in West Bengal and the other in Bangladesh. The river is sacred to Hindus, especially as the final resting place at the end of life. 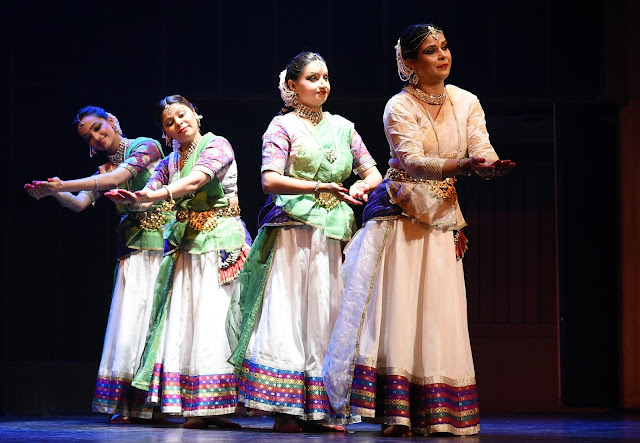 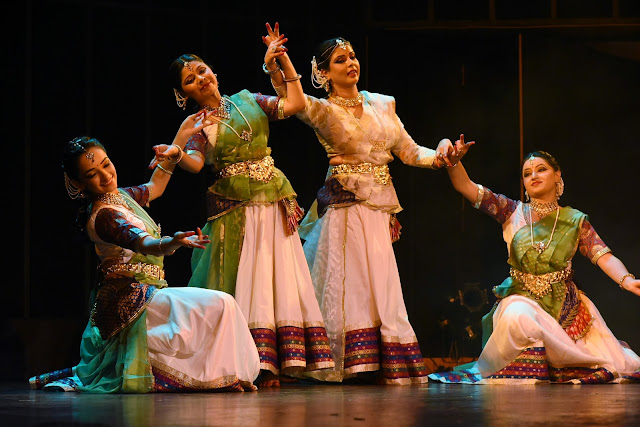 The choreography started with nritta, paran and tukde, proceeding to show the matted locks or jata of Lord Shiva, from which the river flows. The dancers depicted the womenfolk walking to fetch water, bathing and offering anjali, followed by the Ganga stotram – ‘Devi sarveshwari bhagwati Gange, tribhuvan tarini taral tarange’ – showing the waves and flow of the river. ‘Shankar mauli viharini’ – the jata of Shankar with the half chandra were depicted. ‘Hari pad padya tarangini’ – she originated from the feet of Lord Vishnu. ‘Him vidhu mukta dhaval tarange’ – the powerful waves and crests of Ganga were shown in dance. ‘Yen nipeetam param padam’ – the water is pure for drinking, the choreography depicted. This was followed by nritta again, with tihai and wave-like movements. ‘Rogam shokam tapam papam hare’ – the river takes away the disease and tensions of all those who worship her. And finally, the aarti, ‘Om jaya Gange mata’, ending with chakkars by Vidha Lal. 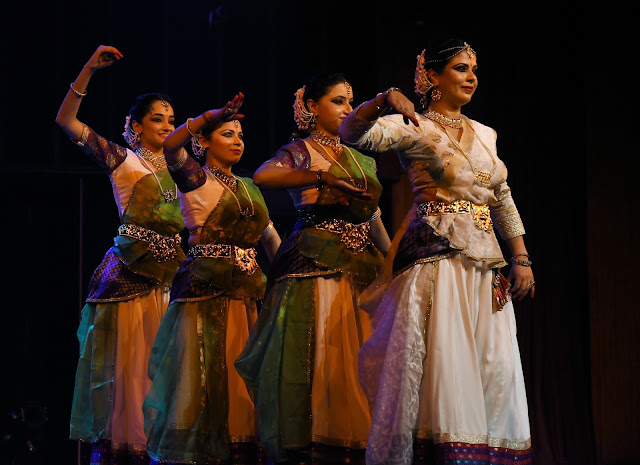 The movements by the dancers were very graceful and smooth, almost wave-like, while depicting the river. The movements were very well-coordinated and rehearsed. The white costumes of the dancers, showing the colour of the river, added to the serenity of the performance. Finally, the last journey of mankind, to be reduced to ashes and dispersed in the river, was shown.

The Yamuna also flows through the northern Indian plains and originates in the Himalayas, but ends in the sangam with Ganga in Allahabad. The waters of the Yamuna are black. In mythology, Yamuna is the daughter of Surya, and the sister of Yama. As Yamuna Maharani, she is the beloved of Krishna. Krishna was born on the banks of the Yamuna. She has been a witness to all the Krishna leelas. The choreography for Yamuna was done by Shri Radha and Raja Reddy in Kuchipudi. 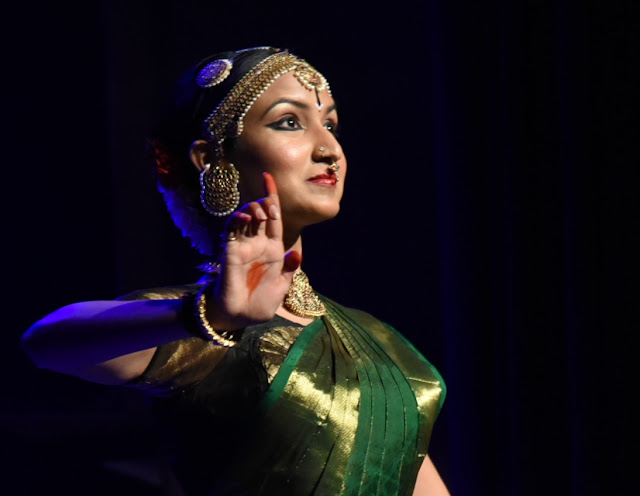 Bhavana Reddy essayed the role of Yamuna. In her purple and orange costume, she looked like the goddess herself. The rest of the dancers wore blue and green-gold costumes. 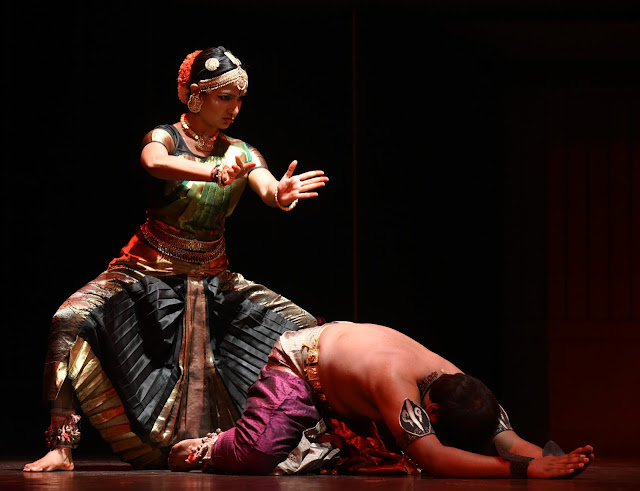 The ode started with ‘Namami Yamune’. Bhavana introduced herself as Yamuna, the daughter of Surya and sister of Yama, and along with abhinaya, she did nritta, showing the crests and troughs of the Yamuna. Krishna performed the raas leela on the banks of the Yamuna. 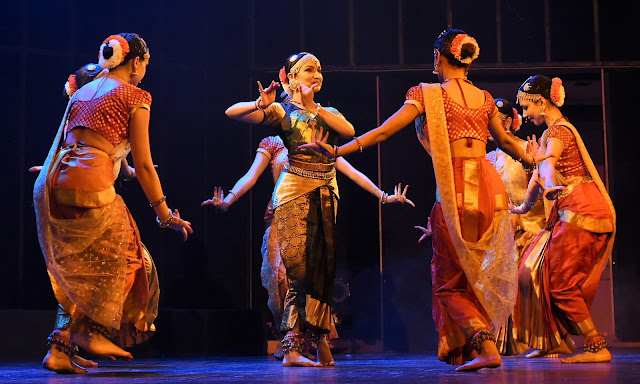 The dancers performed the piece and did a tarangam on brass plates. The footwork on the next piece was fast-paced and the depiction showed the story of Kaliya daman. The fight between Krishna and the serpent was depicted and finally, the river Yamuna had the fortune of having Krishna dance the tandav on her. The dancers did some mesmerizing moves in the Kaliyasamhar, with many leg lifts. 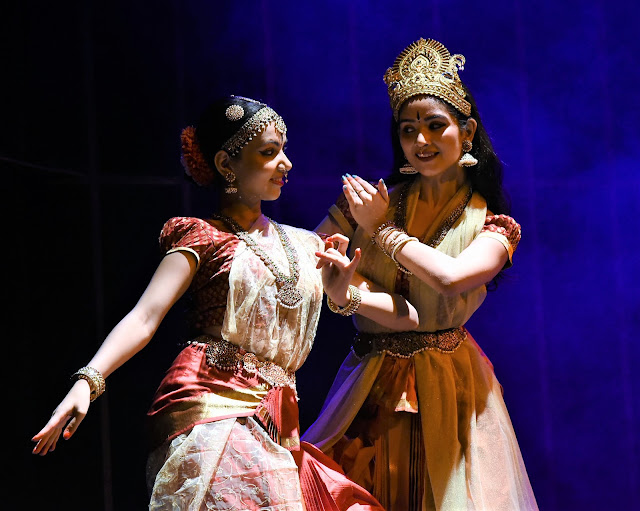 Shringara was depicted through Radha and Krishna, and the vihar of the two on the banks of the river Yamuna. Yamuna is the river which hosts and enjoys watching leelas by Krishna. With the raas happening on its banks, the Yamuna is chandan-poorit. Bhavana Reddy’s smiling visage has a great stage presence. The ease and smoothness of the movements of her dance make them look effortless. A pleasure to watch. 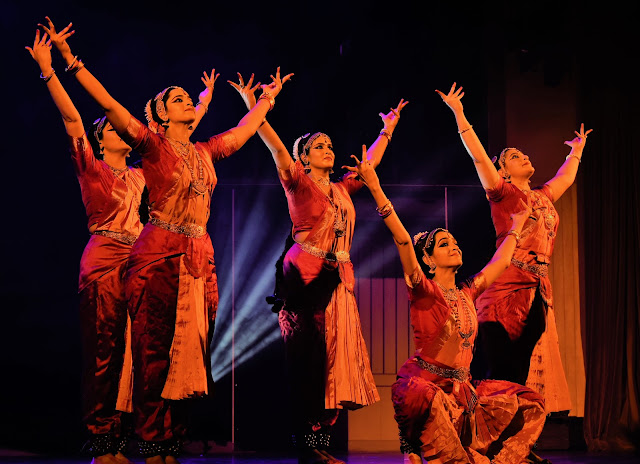 Narmada was depicted by Guru Geeta Chandran and her disciples in Bharatnatyam. The Narmada is one of only three rivers that flows from east to west, originating in Madhya Pradesh and emptying into the Arabian Sea at its mouth in Gujarat. To depict this river, the dancers wore red and gold costumes. 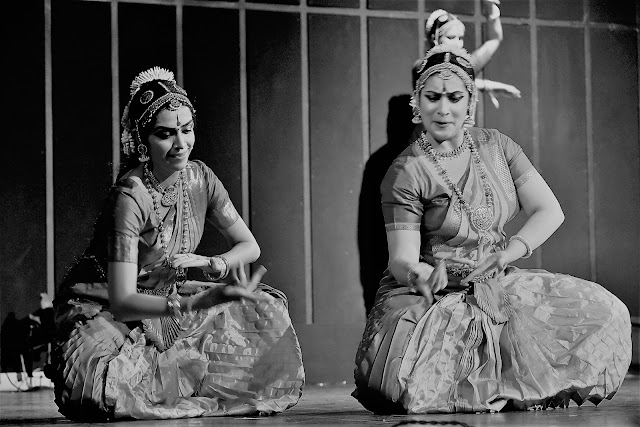 The tale says that the river Narmada originated as Shiva’s sweat – as Shiva sat in deep samadhi, his sweat accumulated to become Shankari, the daughter of Shiva. The dancers depicted the transformation with nritta and formations. 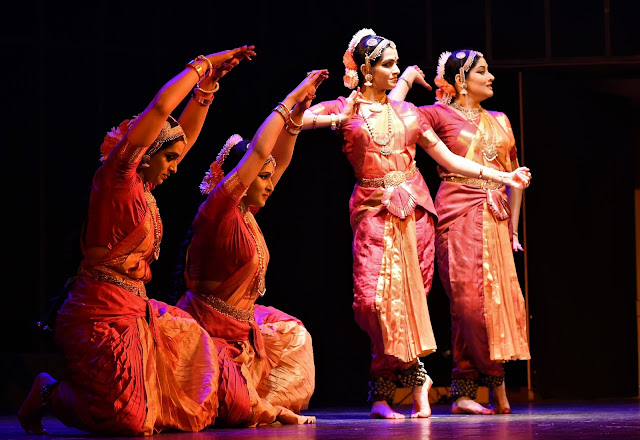 Narmada is the protecter of snakes. The dancers depicted the rowing boats, fish or meen, chakravak, flying birds and the fauna around the river. The river Ganga is considered so pure that she washes away the sins of the devotees bathing in her, but to cleanse herself, she goes to the Narmada in the form of a black cow. 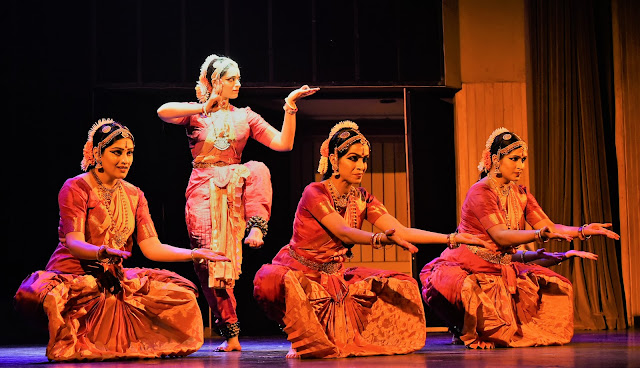 The start was with the stotram ‘Namami devi Narmade’. This was followed by an aarti. Bana lingam, the lingams found here, are the most revererd ones. The river Narmada pounds on the rocks to give them this shape, the choreography depicted. The river as devi is the ‘bhakti mukti pradayani’. Geeta Chandran’s disciples stand out for their precise, well-rehearsed movements and very well-coordinated choreography. Geetaji said it was not easy to choreograph a piece to Hindustani music with sitar and tabla.

Brahmaputra – as the name suggests, the river is a male god, the son of Brahma, Amogha and Shantanu Rishi. This river flows through three countries — India, China and Bangladesh — and is known by several names, including the Tsangpo and the Jamuna. This was performed by Guru Ranjana Gauhar’s disciples in Odissi. 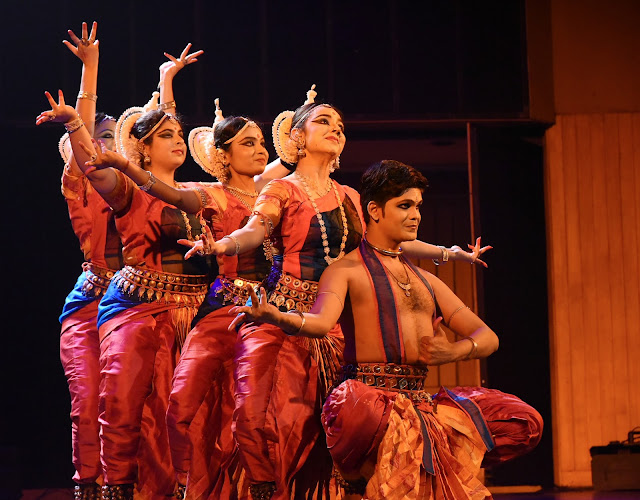 Parashuram had killed his own mother, and so great was the crime that the axe got stuck to his hand. He was asked to create a break in the four mountains surrounding the Brahmakund, holding the waters of the child of Brahma, so that the water flowed out in the form of the Brahmaputra. He washed the axe and his hand in the river, turning it red. And hence, the other name for Brahmaputra is Lohit, or red. 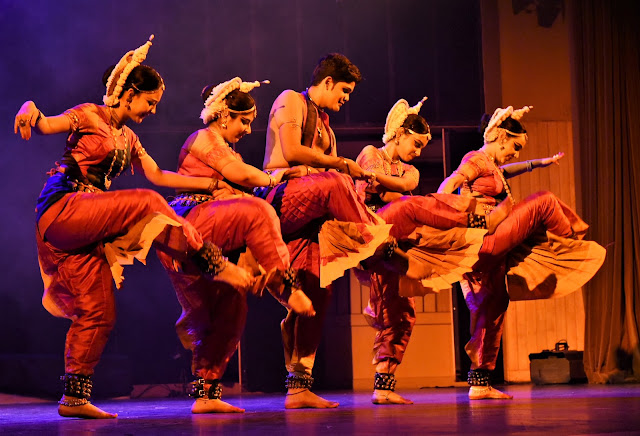 The costumes for the dancers were blue, red and orange. The river flows near the Kamakhya temple, where the devi is also known as the ‘neel parvat vasini’. The nritta was followed by the narration of the story – the four mountains surrounding the Brahmakund, the axing of the mountains, and the flowing out of the river Brahmaputra. The dancers depicted the rowing boatman on the river, with leaps depicting birds. They also briefly performed to the Majuli folk music of Assam, which was used in the choreography, giving it a very regional flavour. The dancers ended the piece with the aarti, with the river being shown by waves. Ranjana Gauhar is an excellent choreographer, and the dancers did an excellent rendition of the choreography, with ease and smoothness in both nritya and nritta. Vrinda Chaddha, especially, has a lot of grace in her movements. Ranjana Gauhar said that she had the only male river in India to choreograph, which made it a challenging task. 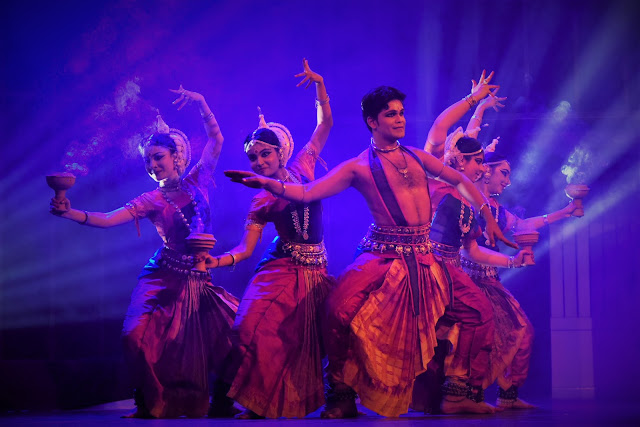 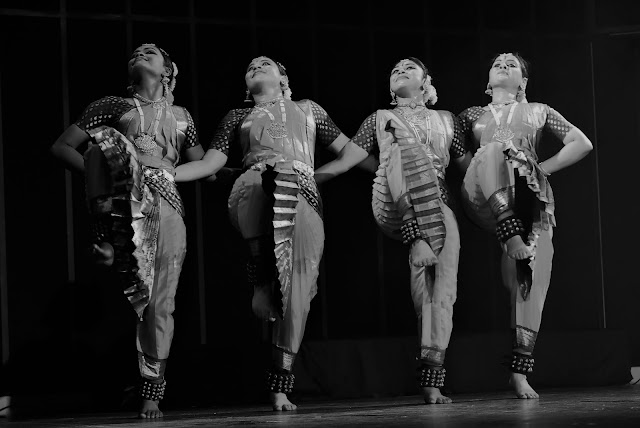 Kaveri, one of the rivers in India whose water is disputed, flows through the two south Indian states of Karnataka and Tamil Nadu, emptying into the Bay of Bengal. The Kaveri delta is one of the most fertile regions in the country. 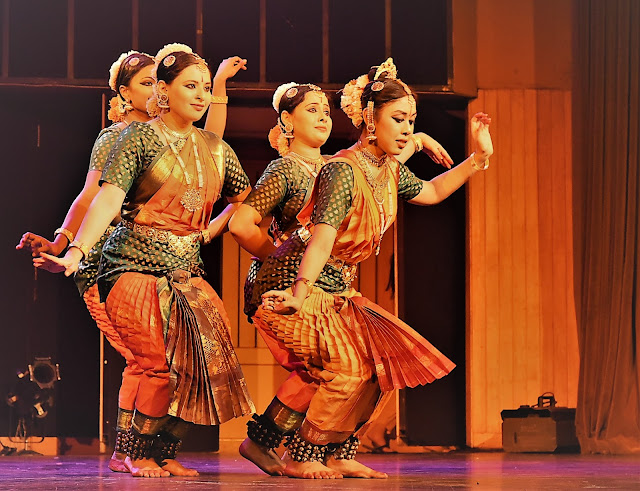 Kaveri was depicted by Guru Saroja Vaidyanathan’s disciples in Bharatnatyam. The costumes for the dancers were orange and green. The performance began with jatis and a procession of instrument-carrying musicians and elephants. After an ode to the river Kaveri, the dancers did a pushpanjali and aarti. 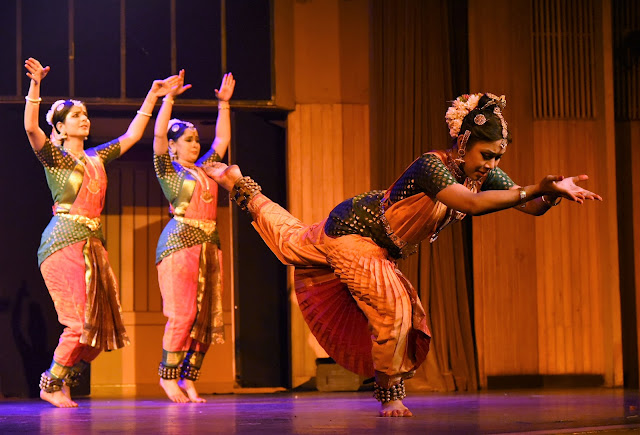 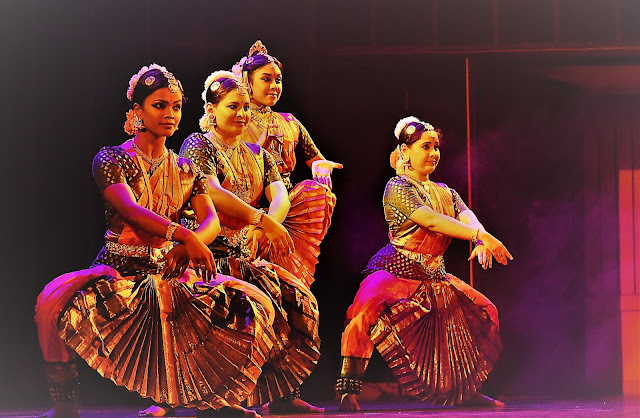 The temple of Lord Brihadeshwara was depicted. Lord Shiva is shown with jata using a broad plie. The Thyagaraja temple and the Ranganatha temple were depicted, and then the tale of the swarna mrig and  the kidnapping of Sita, the war in Lanka, and finally, a stance to show Ram and Sita. The disciples of Guru Saroja Vaidyanthan exhibited a lot of coordination, technique and expertise in the performance.

Finally, all the lead dancers of each group, essaying the role of the respective rivers, came together to show the legacy of Bharat. Each dancer depicted the river in her own style and finally, the waves and ripples coming to a sangam.


The music for all the presentations was by Praveen D. Rao, with vocals by Varijashree Venugopalan.