Ten by Ten was presented by Aditi Mangaldas Dance Company – The Drishtikon Dance Foundation, at the LTG Auditorium in Delhi. The date was also the 10th of May, 2018. If I were ever to rate a performance, though I usually don’t do that, I would rate this performance as below –
Concept – 10/10
Choreography – 10/10
Music and rhythm – 10/10
Literature – 10/10
Dancing – 10/10
Costumes, Sound, Lights and Stage – 10/10.
And this is because plus marking is not allowed. Mathematically, if you see, ten divided by ten is one, which is one whole, and ten into ten is a hundred – sahastra, with the potential of a hundred. The concept, very creatively put across, was “What do the numbers say to you?” For each number from one to ten, the object described was of the same number. The number of dancers was the same. The strings shimmering in the background of the stage also spoke of numbers.

Number one was ‘Breath’. The choreography was in Kathak. Concept, choreography and dance were by Gauri Diwakar, costume by Sandhya Raman. This costume was in pink and gold. “The breath becomes an unending prana of infinite cosmic play. Feel your prana to sense the power of the infinite, hear it to become one with One.” 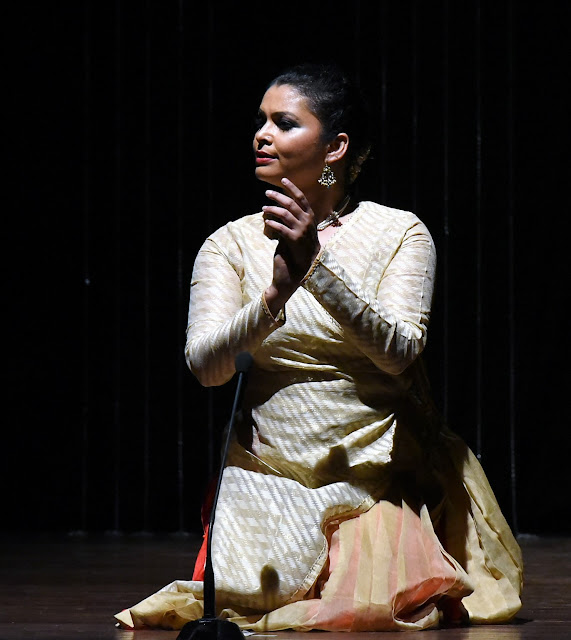 The number of dancers was one, that is, Gauri. Gauri is very strong in technique and abhinaya both, and for this piece, the dancing was very sensitive, without going overboard. Each breath is an individual identity. It is a moment in your life. She started by breathing deeply to the gentle sound of her ghunghroos. This was followed by footwork. Since breath is the life force, it becomes uneven and frolicks. Finally, she depicted the flirtations of two lovers. The nayika wakes him up with a chutki. That one breath between them conveys more than what many gestures could convey. 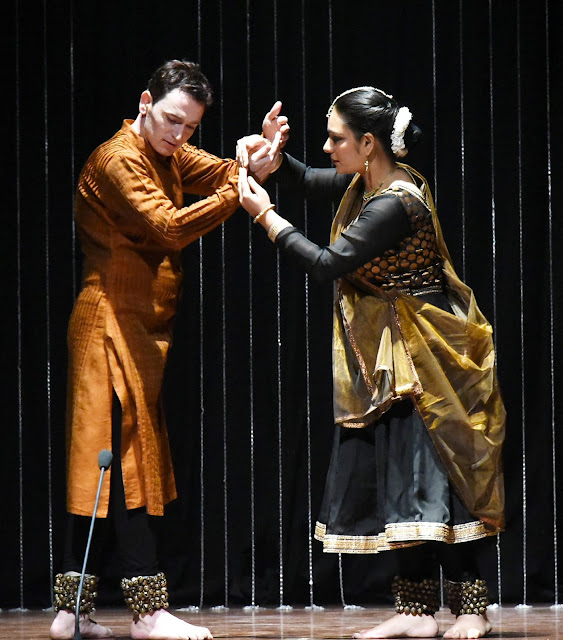 Two was ‘Kal’. Concept, choreography and dance were by Rashmi Uppal and Dheerendra Tiwari. Costumes for Rashmi Uppal were her own and for Dheerendra were by Aditi Mangaldas from an earlier production, Samvet. “Kal — ateet ki parchhain yaa bhavishya ka abhaas”- is it the shadow of yesterday or a sense of tomorrow? ‘Kal’ is the reference for the number two, since it can mean yesterday or tomorrow. The two dancers spun in opposite directions with rapid chakkars. They intertwined their fingers in different formations, tangling and untangling them. In the nritta, they did a tukda, paran, toda and rotations on knees. This depicted the pace of ‘kal’. The abrupt sounds of ‘kal’, ‘aane wala kal’ and ‘jane wala kal’ created the impact of time and space. Both the dancers are seasoned and technically very sound, with many years of experience and the guidance of their guru. 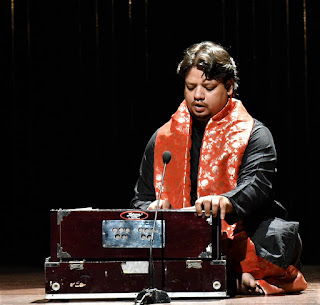 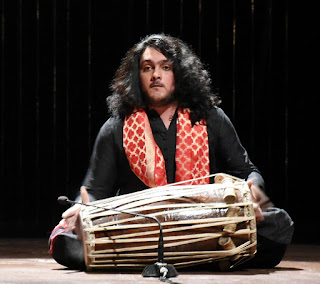 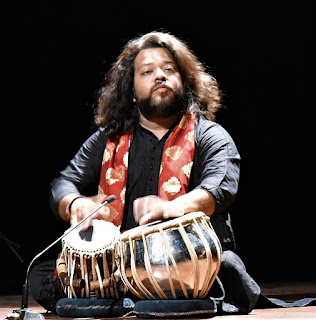 Three was Triveni, a musical performance based on the three rivers – Ganga, Yamuna and Saraswati. The composition was by Faraz Ahmed and Ashish Gangani, performed by Ashish Gangani on pakhawaj, Faraz Ahmed on vocals and Mohit Gangani on the tabla. Costumes were by Aditi Mangaldas. The three of them sat on the stage and performed live; the alaaps by Faraz of ‘Har Har Ganga’ were very gentle. The tabla and pakhawaj never failed to enthral the audience. Like the three rivers, it was also a confluence of the two instruments and vocals. 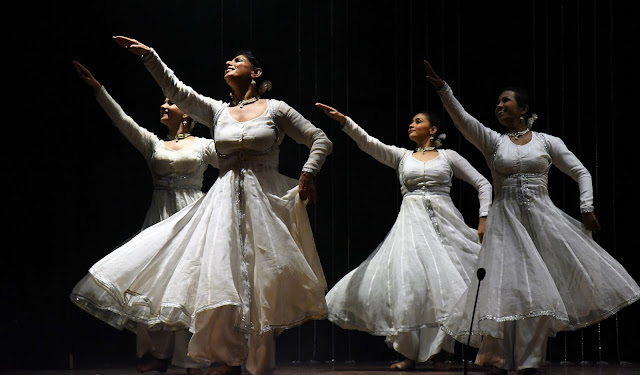 Four was Charavali, a performance in Kathak. Charavali is also a form of poetry with reference to the number four. The poetry by Rachna Yadav said:
‘Chaar kalaein chand ke
kar dein man vibhor
hansiya, ardh, kubra aur poorn
dekhe yun chakor.
Chale itraye moti chhalkaye
paschim se poorab or
charon roop ki chhavi suhani
jhhalke nabh ke chhor.’
Concept and choreography was by Rachana Yadav and Anindita Acharjee, danced by Rachana, Anindita Acharjee, Tripti Gupta and Diksha Tripathi. Poetry was by Rachana Yadav, set to music by Faraz Ahmed. Costumes by Aditi Mangaldas were white, to go with the moonlight. The manjira sound in the beginning was prominent, followed by tihai and bandish. The poetry was set to very melodious music and the four dancers depicted the four ‘kalas’ of the moon; the moon, being known as ‘shashi’, ‘shashank’, ‘shobhit nabh par’. A very well rendered piece with a lot of grace using the chand ki gat. As the moon moves on, the chakor looks at it. 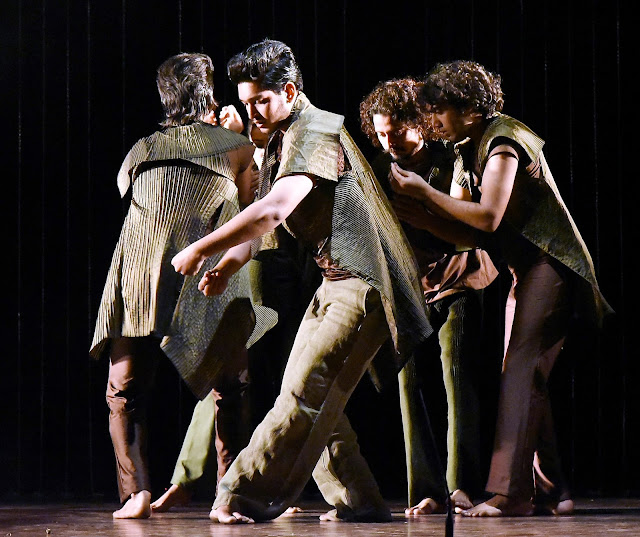 Five was ‘Five elements’. The choreography was in contemporary based on Kathak. Choreography was by Manoj Sonagra. The dancers were Manoj, Minhaz Khan, Sunny Shishodiya, Gaurav Bhatti, Aamrapali Bhandari. The special mentor for this piece, it being contemporary, was Deepak K. Shivaswamy. The music — 'Deep Blue' — was composed and performed by Bensound. Costumes were by Aditi Mangaldas. Five stood for the basic elements of life. The costumes were in dark metallic colours. The dancers depicted one element each in very innovative choreography. It was through writhing, wringing, and rotational movements that the existence of the five elements in the body of a living being were shown.

Six was ‘Seeing The Unseen’ – choreography based on contemporary dance based on Kathak. Choreography was by Minhaz Khan. Dancers were Minhaz, Aamrapali, Manoj, Anjana Kumari, Tripti and Gaurav. The special mentors for the piece were Deepak K. Shivaswamy and Gauri Diwakar. The music was by all the three musicians — Faraz, Ashish and Mohit — and Dheerendra Tiwari. Costumes were by Aditi Mangaldas. The six dancers were in grey. Minhaz started the piece sitting in a half squat, thumping his feet and clapping, displaying some brilliant moves and amazing balance. This was followed by rapid clapping by the dancers in formations. The five senses, which provide physical perception, are seated on chairs. The 6th sense, which transports you to your past, present and future, walks and symbolically pulls out their chair. The dance with thumping of feet, clapping and leaping, showed the interactions between them. The 6th sense, after uprooting the other senses, makes a pile of their chairs and sits on them. The 6th sense rules the perceptions of the rest. A very skilfully rendered piece.

Seven was ‘7 Surashva’, done in Kathak. Choreography was by Sunny Shishodiya. Dancers were Sunny, Minhaz, Anjana, Tripti, Manoj, Gaurav and Diksha. Guidance was by Pt Birju Maharaj. Music was by Sunny Shishodiya and Faraz Ahmed. Costumes were by Aditi Mangaldas in yellow and gold. The seven dancers stood for the seven horses that draw the chariot of the sun. The journey of the surya’s ashva from east to west is showcased as the musical journey of the seven horses depicting different swaras, or the sur ashva. They began with aalaap and recital of the bols of paran. The dancers tapped their feet as the horses were shown moving across the stage, using fast-paced footwork, group renditions, footwork with aalaap and different formations. ‘Aham suryam pranayamayam’ was shown with positions of hands and feet. The piece had a lot of movement and pace, filling the stage.

Eight was ‘Nirantar’, the infinite. Concept and choreography in Kathak were by Anjana Kumari. Dancers were Anjana, Aamrapali, Diksha, Tripti, Minhaz, Manoj, Sunny and Gaurav. The inspiration was from Pt Rajendra Gangani, and the music composition was by Faraz, Ashish and Anjana. Costumes were by Aditi Mangaldas in blue, green and gold. The number of dancers was eight. The number 8, when seen horizontally, resembles the symbol for infinity, that which is everlasting. Infinity knows no boundaries, beginning or end. To the manjira in the beginning, the dancers did rapid chakkars in figures of 8. Besides the revolutions, they used tihais, todas, layakari, and gradually, they slowed down to the sounds of tum na na, na na na na. 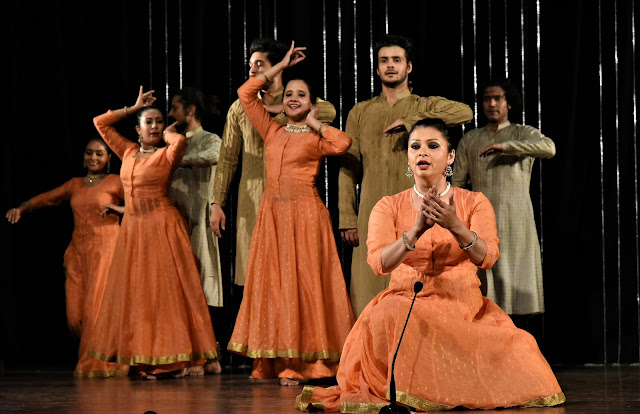 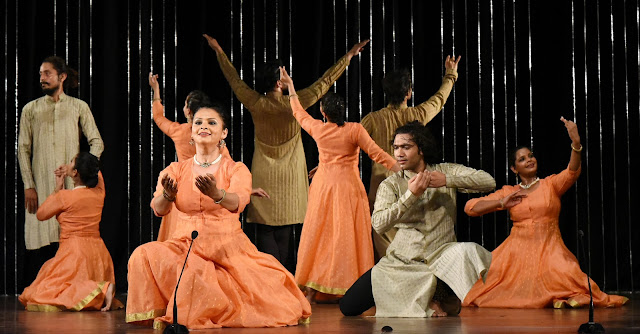 Nine was ‘Nau’, with concept and choreography in Kathak by Gauri Diwakar. Dancers were Gauri, Minhaz, Anjana, Aamrapali, Sunny, Manoj, Tripti, Diksha and Gaurav. The text was from Ritusamhara by Kalidasa. The costumes, in off-white and orange, were by Gauri Diwakar and Aditi Mangaldas. In Urdu, ‘nau-ba-nau’ means new, fresh, and ‘nau khej’ means newly risen or adolescent. The piece was presented in nine matras. The technical part had chautala, gat and uthan. The new and fresh was brought out with reference to vasant, charu-tarang. It was a soulful rendition. 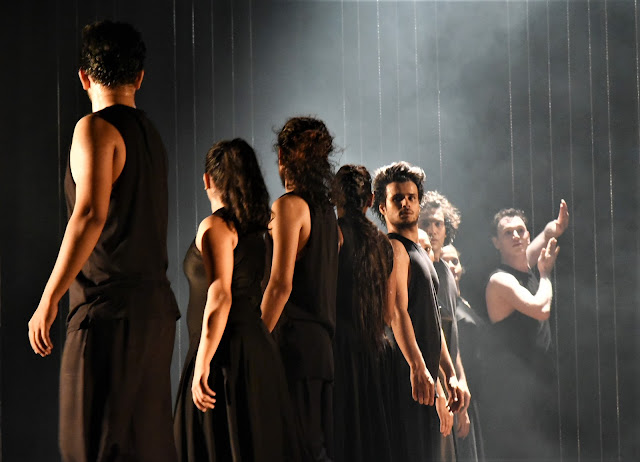 Ten was ‘Dashavatar’, with 10 dancers. Choreography was by Gaurav Bhatti. Dancers were Gaurav, Gauri, Minhaz, Anjana, Aamrapali, Sunny, Manoj, Tripti, Diksha and Dheerendra.  There was a special mention for Deepak K. Shivaswamy for this piece. Music was by Hiren Chate, sung by Eva Brandt. Costumes were by Aditi Mangaldas and Gaurav Bhatti, and were in black. 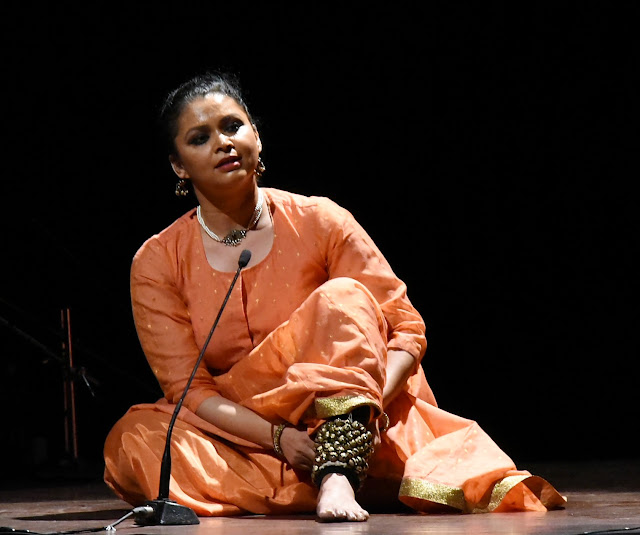 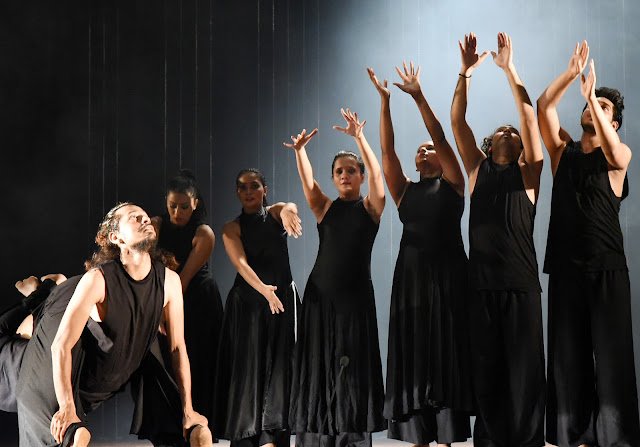 The dancers did violent hand movements and the effect was created by light, music, breathing sounds, and the thumping of their feet. The entire effect was like science fiction. Each dancer came up and depicted one of the incarnations of Lord Vishnu — matsya, kurm, varaha, narsingh, vaman, Krishna, Buddha, Ram, Parshuram and Kalki. The dashavatar is usually a piece rendered in the classical style, but to see it as a fusion of contemporary was a different experience.