I recently reported the first performance by Pavitra Bhat at Usha RK’s Shri Kshetra held in Delhi, in which he depicted Shriranganatha of Shrirangapatna. The next performance for the evening was by Kathak dancer Abhimanyu Lal, depicting Shrinathji of Shrinathdwara.


Abhimanyu, the son and disciple of Kathak guru Geetanjali Lal of the Jaipur gharana, is an accomplished and powerful Kathak dancer. His solo performances have been recognised both in India and abroad, and he also performs as a duo with his wife, Vidha. He has been awarded the Shri Krishna Gana Sabha Endowment award and the Nritya Jayantika award.

Ushaji, in her usual elaborate and thorough introduction, presented a picture of the deity. Nathdwara is situated in the Aravalli hills in Rajasthan on the banks of the Banas river in Rajsamund district, 48 km northeast of Udaipur. It is an arid area. The deity Shrinathji belongs to the 14th century. The lord has the left arm raised above his head, lifting the Govardhan hill, while his other hand rests on his waist. He was originally worshipped near Jatipura in Mathura. 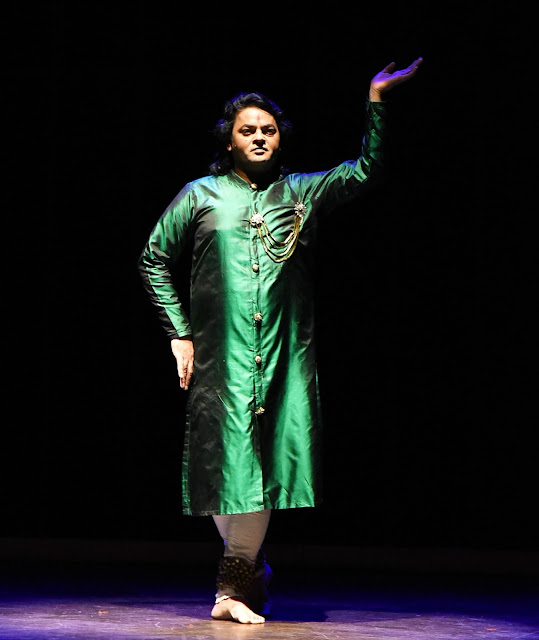 Nathdwara is the gateway to Shrinathji. The sewa paddhati here is according to the Pushtimarg, established by Shri Vallabhacharya ji, or Shuddha Advaita Vitthalnath ji, the son of Vallabhacharya, who institutionalised the worship of Shrinathji at Nathdwara. The temple was built by Maharana Raj Singh of Mewar. The tilak on the deity’s head is like the impression of the heel of Shri Radha’s foot, the lotus garland is Radha’s heart, the Yamuna water container on the pedestal represents mother Yashoda, and the throne is the mother’s lap, since he is still a child. His lotus-shaped eyes are Kamdeva’s bow. The lord is just a seven-year-old child here.

The sewa paddhati established by the Ashtachhap bhaktas is called the ashtayam sewa. So for every prahar of the day, there is a different kind of sewa to be followed. Mangla, or the dawn darshan has the lord dressed in a white dhoti or a coat in the winter. Parmanandji is the saint for this time of the day, and an aarti is dedicated to him. In the shringara sewa, the lord awakens and is dressed with a mala of flowers, a flute placed in his hands. Dry fruit is offered to him and the saint for this time of the day is Nandadasji. The gval darshan sees the lord take the  cows grazing. Dhoop deep is offered and the bhog has kheer and rabri. Shri Govind Das ji is the poet for this time of the day. Rajbhog is the next darshan, where the lord is dressed in all his finery, the food is very elaborate, aarti is offered and then the kirtan is by Kumban Das ji. In the utthapan sewa at 3pm before dusk, the lord wakes up after his siesta, the veena is played and the kirtankar is Surdasji. In the sandhya or evening bhog, fruits and a light meal are offered. The kirtankar is Chaturbhuj Dasji. In the sandhya aarti, the cows are back at the time of godhuli. The kirtankar is Chitar Swamiji. This includes the evening aarti. Finally, the shayan sewa is when the lord retires for the night with an aarti. He is offered paan, and the poet for this time is Krishnadasji. 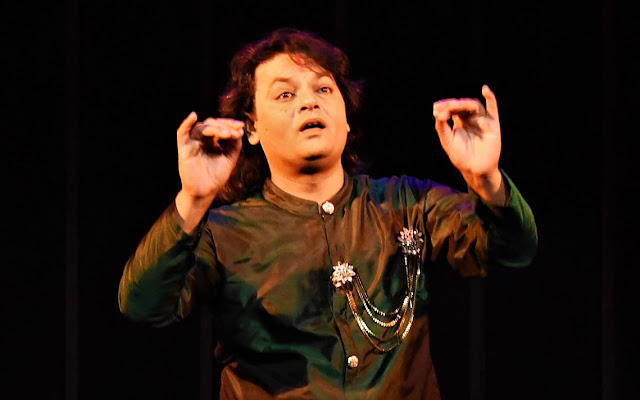 Guru Geetanjali Lal said that for her, the title of Shri was important. Abhimanyu started with taking the stance of Shrinathji, one hand raised to hold the Govardhan Parvat and the other on his waist, as chanting, bells and manjira formed the musical backdrop. The stance was graceful and majestic. Next, it was the depiction of the mangla sewa, where Thakur Shrinathji is awakened by Yashoda ma. The kavit sang or recitation in a slow rendition by Vidha Lal was the composition ‘Banki hai paag’, depicting the chaal, gati, vachan, tilak, Govardhan parvat, urmala, the friends or gopal with him, aarti and archan. The mother sings gently, ‘Jagiye Gopal lal janani bali jaye’. When Gopal does not wake up and keeps turning away, the mother pokes him and makes loud noises to wake him up. She sprinkles some water on him with a flower very gently. ‘Praat bhayo timir gayo khelat gopal baal’ – that is, since the sun has risen, he should wake up. The bhava was done with a lot of effort at expressiveness and playfulness.

After a short interlude of nritta, there was a description of the beauty of the lord’s face. Finally, she warns him by saying that gwal and gaiyya have already moved afar. Gopal immediately gets up, leaves his bed, pulls down his covers and asks for dahi and mithai for bhog, since he has to leave immediately. This act was a little out of Abhimanyu’s comfort zone, but he did full justice to the bhava. In the next piece, called Leela Mohan, a few Krishna leelas were depicted.
Abhimanyu next took the stance of the morpankha and bansuri of Lord Krishna. This was followed by footwork, tukdas and tihais. Lord Krishna is shown as playing ball with his friends near the Yamuna, and on the pretext of getting the ball from the river, he jumps into it and vanquishes the Kalia Nag. Abhimanyu finished that with a bhajan and archana, ‘Sharan gayo ko kaun ubaryo, jab jab bheed padi santan par chakra Sudarshan dharyo’. 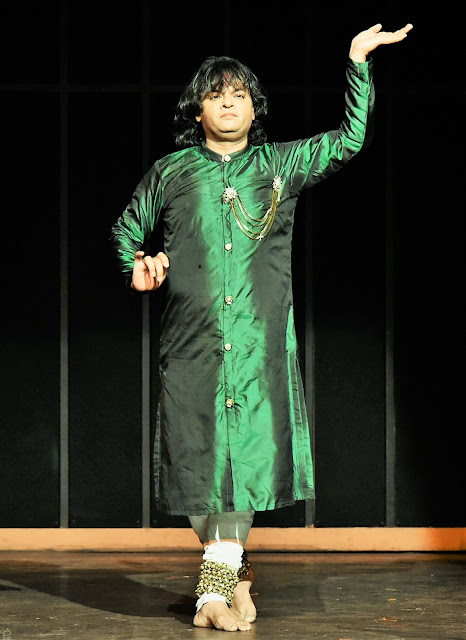 The Govardhan leela was depicted, in which Indra is annoyed and with his arrows, he causes thunder and rain. Braj is flooded with torrential rain. Kanha protects the Brajbhumi and its people and animals by lifting the Govardhan Parvat on his little finger and providing shelter to everybody. Even the aged help him by supporting the parvat with their lathis. To protect bhakta Prahlad, Lord Krishna breaks through a pillar and protects his bhakta by taking on the incarnation of Narsingh Bhagwan.
The performance ended with footwork and sankirtan. Abhimanyu successfully depicted these compositions with bhava, though his forte is nritta. Each leela, with its details, was enacted with a lot of sensitivity.

Later, speaking about his preparation and performing beyond his comfort zone, Abhimanyu said, “The details were outlined and worked out by Ushaji. My strong point is nritta, but the performance is not complete without bhava. In the last piece, I was totally involved with the lord and I hope I did justice to the theme. In the first piece, Yashoda tries to wake Kanha up. Though the piece was on Shri or Shri Krishna, but it was more about Yashoda. So I was totally involved in the nritya and the response from the audience encouraged me. This is the first time that I have devoted the entire performance to bhava.”

For this performance, on the padhant was Vidha Lal, on the tabla Yogesh Gangani, on pakhawaj Mahavir Gangani, vocals – Santosh, flute – Vinay Prasanna, and sitar – Salim Khan.