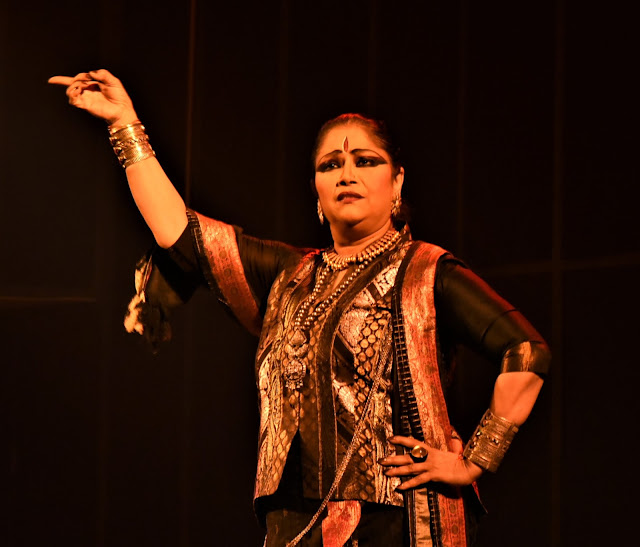 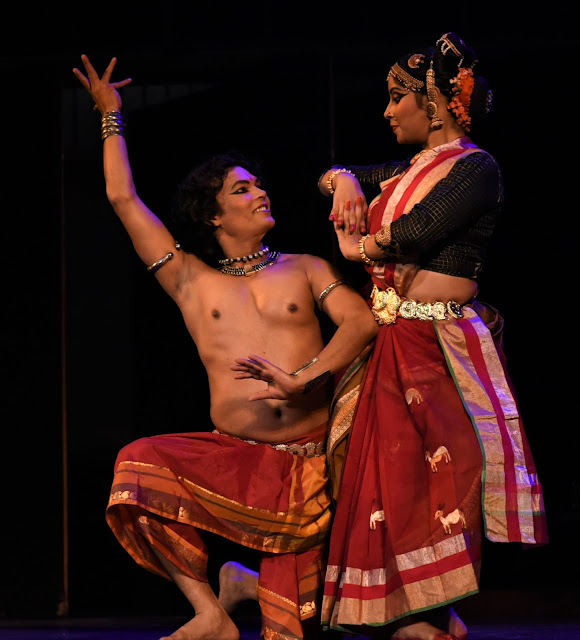 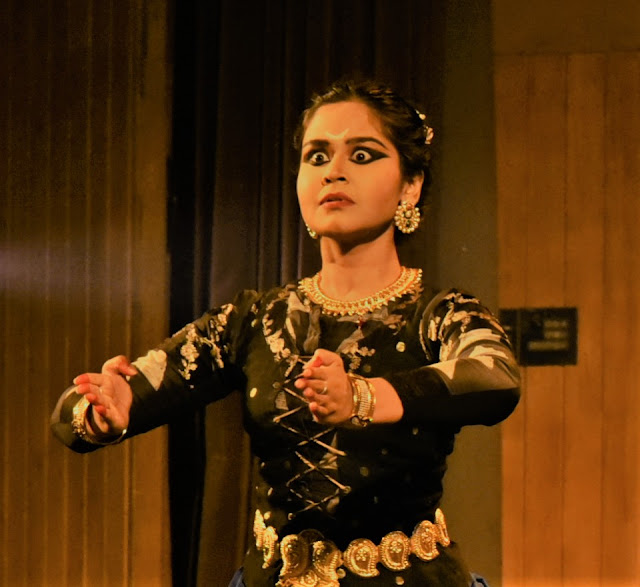 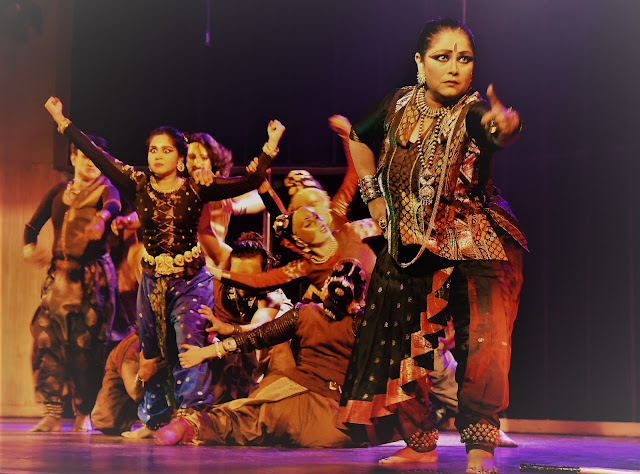 The performance that evening was in three styles of dance – Kuchipudi, Chhau and Bharatanatyam. ‘Abhimanyu Vadh’ was revisited here and has been previously reported on this blog. The production never fails to impress the audience, with excellence in every aspect and its ability to move them. Talking about her work, Vanashreeji said that these styles represent the opposite aspects of tandava and lasya on one hand, and on the other hand, complement each other. She applauded the teamwork of her dancers.

The next piece was ‘Dwadasha Jyotirling’ or the portrayal of the twelve jyotirlings worshipped in India. The 12 jyotirlings represent Lord Shiva’s various manifestations and are ancient seats of worship. Each one is marked by its geographic location in India – Somnath in the Prabhas Kshetra in Gujarat, Mallikarjuna on the banks of the Krishna river, Mahakaleshwar in the Mahakaal forests of Ujjain, Omkareshwar in Madhya Pradesh near the Narmada river, Baidyanath or Baijnath in Jharkhand in the Santhal Pargana region, Bhimashanker in the Sahyadri region in Maharashtra, Rameshwar in the southernmost region in India, Nageshwar in Gujarat, Kashi in Varanasi, Tryambakeshwar in Nasik, Maharashtra, Kedarnath in Uttarakhand, and Ghrishneshwar in Aurangabad, Maharashtra. 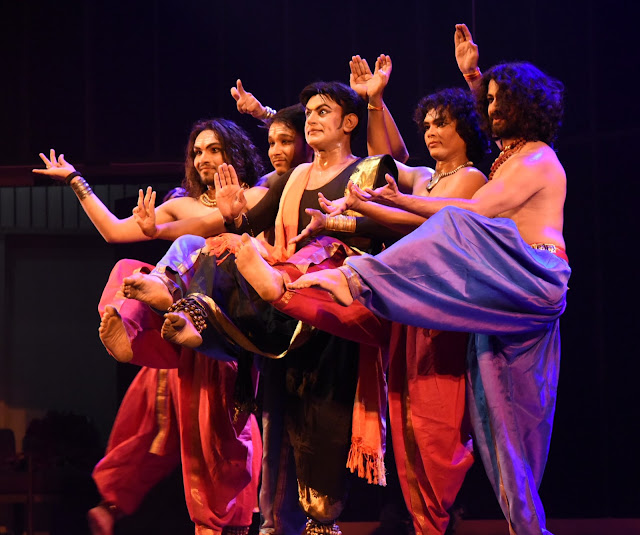 Each of these Shivalingas has a tale from Hindu mythology attached to it. Dr. S. Vasudevan depicted various aspects of Shiva through his nritta and abhinaya. The damru, jata, one hand holding the agni, ganga, trishul, the chandra on his forehead, his accompanying bhoot-pret and snakes wrapped around his body. He brought out both, the tandava and lasya elements, in various formations and postures to portray Shiva. Finally, there was the depiction of the mountains, the puja of Shankar and each of the five dancers showcasing a different attribute of Shiva. Dr. Vasudevan and the entire group of Kuchipudi and Chhau dancers did this piece. 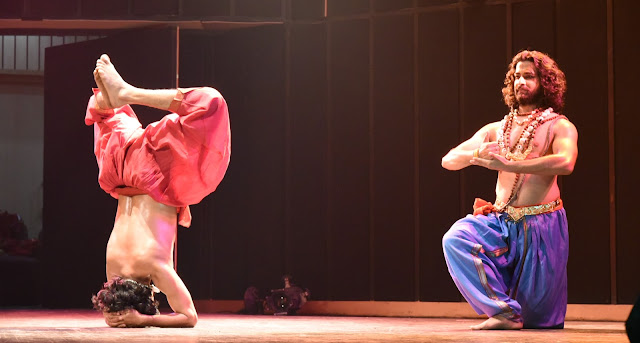 Further, the story of the young Markandeya Rishi was narrated. The young devotee was destined to die at the young age of sixteen. But he continuously chanted the Mahamrityunjaya mantra and pleased Shiva, who blessed him with eternal life. When Yama, enacted by Dr. Vasudevan, comes for him, Shiva fights him off and saves his devotee. Markandeya Rishi is shown as having his holy dip, and preparing for the puja with flowers. He chants the mantra while doing a headstand in a yoga position. 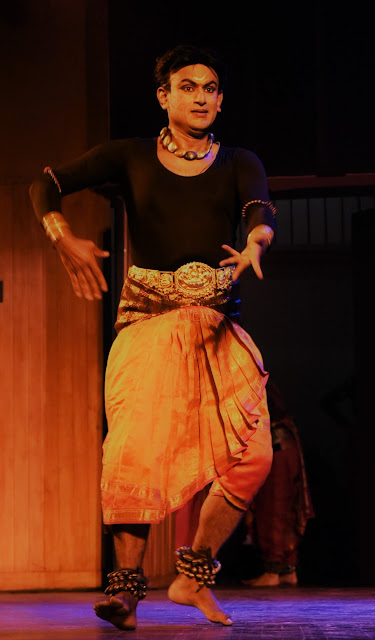 The stuti of Shiva followed – ‘Vishweshwaraya mahadev tryambakam tripurantaka mrityunjaya neelkanthaya sadashivaya sarveshwaraya’. This was done to the accompaniment of holy music, bells clanging, chanting – a mesmerizing dance with leg lifts, postures and formations. The piece ended with a shloka, an ode to Lord Shiva showing the five elements in Nataraja. 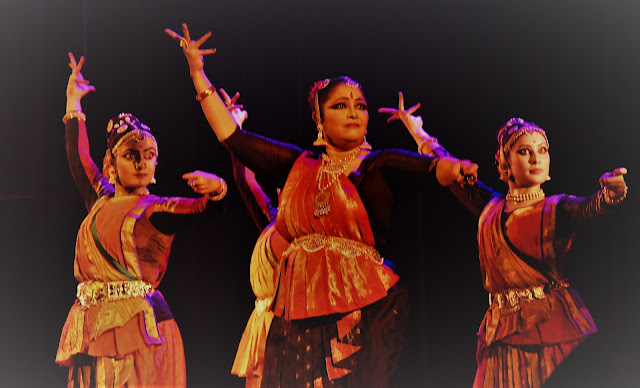 For the thillana, the sahitya was based on panchabhutam or the five elements which symbolize Lord Shiva. The composition was in ragam Sindhubhairavi in aditalam. The Bharatanatyam by Dr. Vasudevan had a lot of energy and pace. The nritta had jathis with footwork, squats and leg lifts. The hastas were extremely precise and delicate. 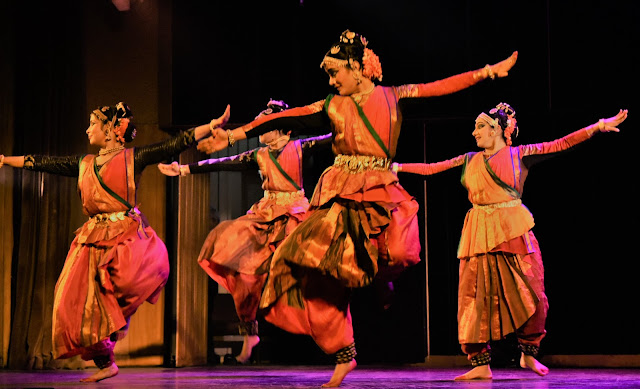 The Kuchipudi dancers had softer, more feminine movements and footwork. The tarangam was perfect on the plate and the hand movements depicted bees, birds and lotuses. 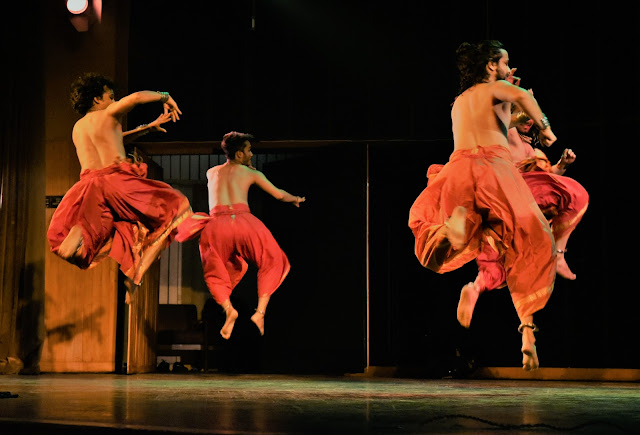 The Chhau dance, with its masculine energy, had rotating leg lifts, upper body and arm rotations, gyrations and leaps. And finally, all the three forms were brought together on the stage. The Panchabhuteshwar, depicted by Dr. Vasudevan, showed the earth and the animals, birds and plants etc. in it, water as Ganga, sound in damru, mahavyom and agni in one hand. Finally, the stance of Lord Shiva with all the dancers was mesmerizing. The performance had all the elements of perfection – music, choreography, dance, technique and execution. 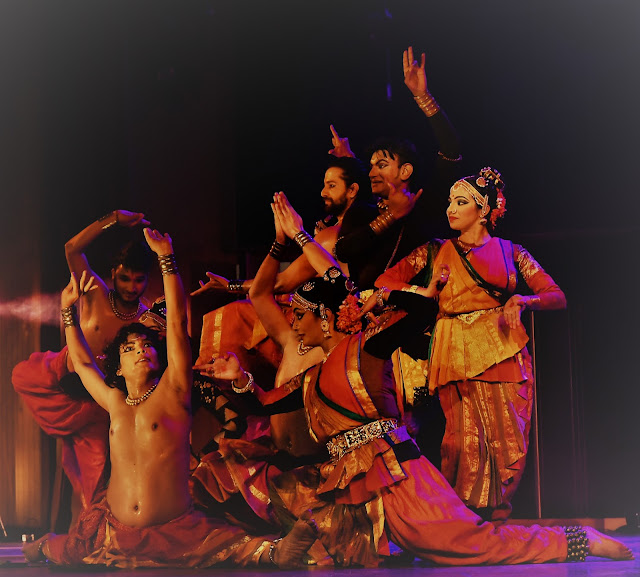 The concept, script and Kuchipudi choreography were by Vanashree Rao, Chhau choreography by Kuleswar Kumar Thakur, and Bharatanatyam choreography by Dr. S Vasudevan. Dr. Vasudevan had also done the music along with K. Venkateshwaran. The drums were by R. Kesavan, special effects by Prasanna, flute by Rajat Prasanna, violin by Master Raghavendra, masks by Shamim, makeup by Naresh Khare, lights by Milind Srivastava, and the costumes by Vanashreeji and Sandhya Raman. For Abhimanyu Vadh, the choreography credits were the same. As for the musician, on nattuvangam was Dr. S. Vasudevan, and he also did the vocals with K. Venkateshwaran. Percussion was by R. Kesavan, flute by Rajat Prasanna, violin by Raghavendra Prasath, music editing by Ankur Kapoor, lights and sound by Sharad Kulasreshta, masks by Shamim, makeup by Naresh Khare, and the costumes again by Vanashreeji and Sandhya.