Building Blocks: Aditi Mangaldas on Ten By Ten, from theme to concept to staging

Kathak exponent and guru Aditi Mangaldas recently had younger dancers, members of her Drishtikon Repertory Company, present short thematic pieces as part of a production called Ten By Ten. I spoke to her later about how the bare bones of such a theme become ten very different conceptual pieces, and how a concept, once thought through, is translated to other dancers and into a production. As the second installment in the Building Blocks series of interviews, this is the fantastic Aditi Mangaldas on how a theme becomes several different concepts and pieces and how it all goes from idea to staging.

Q: Once you had the concept, how did you proceed to develop the production?
A: I had thought of this concept of Ten By Ten two years ago – from 1 to 10, what do the numbers say to you? For 1, you have one dancer, and not only one artist, but what 1 signifies to that dancer. We couldn’t do it two years ago, it just didn’t work out, but this year, we took a bold step ki karna hi hai (we just have to do it), and it worked. But individual concepts were then decided by the dancers themselves, sometimes singly, in discussion with me, or as a group – we all sat down and said ok, what does 5 mean, what does 6 mean, etc. and took it from there. That was the basic concept – to take a number, to put that many number of dancers on stage, and to see what that number meant to the choreographer of that piece. Then we sat down and worked in terms of seniority and who I felt would be able to do better in terms of the choreographers. There were ten choreographers, and suppose 5 came to Manoj (Sonagra) – we made a whole list of things about the meanings of 5 – senses, elements, etc. and then he decided that he would like to do five elements, and that’s when he started developing the piece, for example. 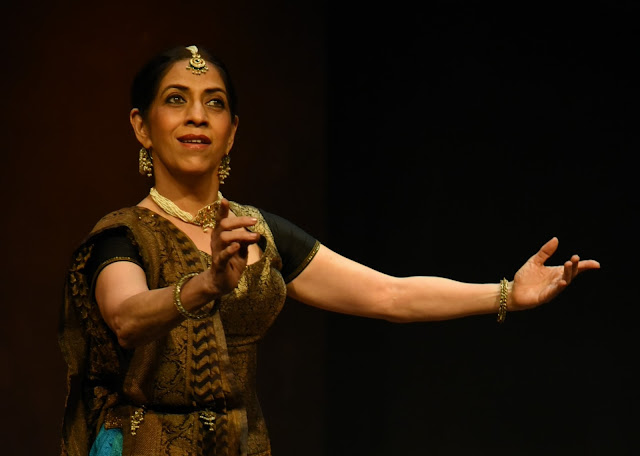 Q: What goes into building up the final presentation, including stage, costuming, lights etc. from the concept onwards?
A: I can only talk about this particular piece. This overall concept was in my head, and then I put it to these dancers – there was discussion and more discussion. Then I told them go and read about their subject and plan it. This actual reading, planning, the transformation of the number into movement, the deciding of the music, the deciding of whether it will be in Kathak or whether they want to use a different vocabulary – that was a churning process. Each one went back, did their own work, came back – some I had more of an interaction with, some less. There was a lot of mentoring in terms of when you watch it, you ask a lot of questions – why are you doing this? If you’re doing it, if that is your intention, it’s not reaching me as the audience. It’s a process that went on till two weeks before the performance in various different stages. Some people had completed it, some people still had it happening. Deepak Kurki Shivaswamy helped in the mentoring for the contemporary pieces, I was mentoring all the pieces and basically it was a lot of discussion. Then I sat down with each choreographer and said, let’s sort the costume out, let’s discuss. Because we didn’t have any funding – Drishtikon as of now has funded this. Luckily, I think we will have made up the charges for the theatre from the ticket sales. But there are a lot of other costs too. So we said costumes, let’s source them from what we already have. The solos and duets – some of them were the choreographers’ own costumes, but most of them were from Drishtikon’s other productions. We tried to see how we could adapt the costumes we had from our older productions, whether the choreographer liked it, if not, what was their opinion, what would they like to do... The choreographers themselves worked with our three musicians on the music. Then eventually, when they would show it to me, I would say here I think if you remove the text totally it was more powerful etc. That was my input – to question them and to give small suggestions here and there. Mainly to question them and in a way, guide them – that’s what a mentor is.
For two weeks, I was abroad, so I left them. It was like, we have put everything in the pot, and now it’s boiling, so work on it and try and do the best you can. My rehearsal with them was 7th, 8th and 9th, that’s it. On the 7th, we went through everything in Drishtikon, and that was like really deciding whatever costume we have, wear it and dance it, and whatever is not working is not working. We had to cut it, add this, let’s see how the whole thing flows. 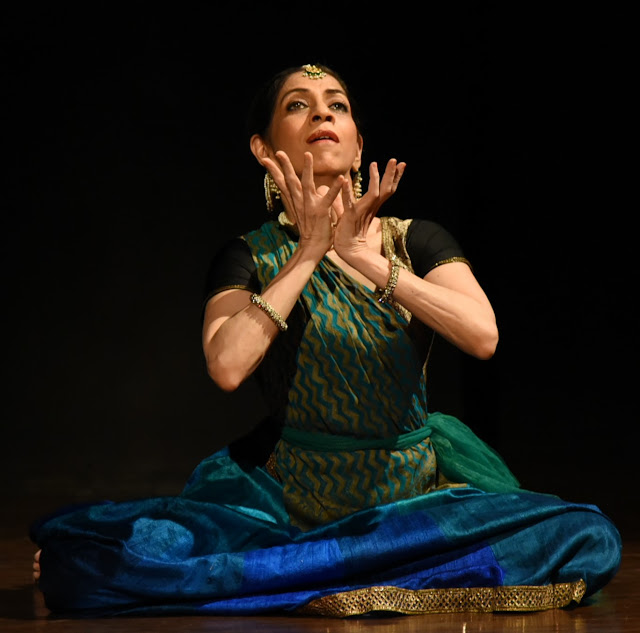 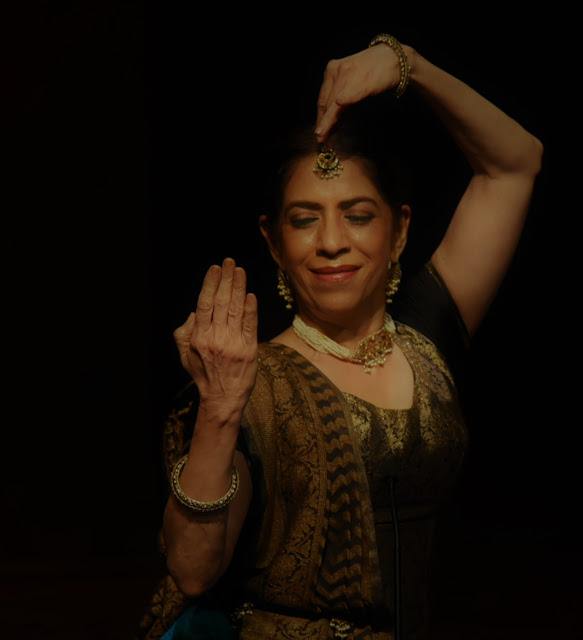 Q: Once you have a concept, do you take any literary inputs from anyone?
A: I’m not talking of myself, but here, many of the choreographers who used poetry or a shloka, I said look, this is your choreography. Gauri, Rachna, Rashmi and all already make big productions of their own, they have some idea (of how to go about research). But the others, I said, how much effort goes into it, that I want you all to experience. If there is any research, you have to do it yourself. If you can’t do it, only then will I help you. Everything everybody did individually. Gauri spoke to so many people for her piece – each one of them did. Poetry Rachna wrote on her own, kahin jo text use kiya hai ya apne aap likha hai (whether they have used a piece of text or written some on their own), they have consulted scholars who would suggest a particular piece… See, after all, it was only 7 minutes. The exploration was obviously limited to 7 minutes. But of course that is a must – I talk to so many people, I go and collect so much material, let’s say for Within or Interrupted, out of which maybe 10% is used. Jaise Immersed hua tha, toh kitna sara material tha. Usmein se chaar cheezein select ki thi (Like with Immersed, there was a lot of material. Only four pieces of that were used). There is so much material for Within. Ab usmein se 10 ya 20% actually Within mein gaya hai (Only about 10 or 20% of that has actually gone into Within). The rest, the 80%, whenever I’m making a new piece, I refer to all my older pieces, because I find some gems in them which were not used. Not only in terms of literature, but also poetry, stage, concept, music, dance ideas… I literally have packets. I have notes on little tissue paper, on the backs of invitations… Anything to do with that particular production, I put into that file, and it’s a huge file. It’s like a box. If I do Within over five years, all the five years go into it. Now when I want to do it in the sixth year, I go back and reacquaint myself with my own production. There are so many things I’ve not used and suddenly I’m like arre, this is very nice, iska toh kuch aur ban sakta hai (this can be used for something else). And that will be in my head and then it can be used in the future for another production. It was a beautiful, collective feeling.