The Varsha Ritu festival was held at the IHC on the 19th and 20th of July. Though the city wasn’t getting much rain that day, the festival was a must-watch.
On the 20th of July, Arnaz Zaman, a disciple of Kavita Dwibedi, was the first performer. Kavita Dwibedi is the daughter and disciple of Harekrishna Behera, and Arnaz is her disciple. She began with a pushpanjali to Lord Jagannath Swami, followed by an ode to Lord Shiva, a shivastuti. The bhakta performs the puja, applies tilak and offers flowers to the Lord. Shravanmas is the month of worshipping Lord Shiva – ‘Vande Shambhu Umapati’ goes the ode to Lord Shiva, describing his beauty and cosmic powers. The music was by Shri Suresh Kumar Sethi, and the composition was in raag Jait, taal ektali. 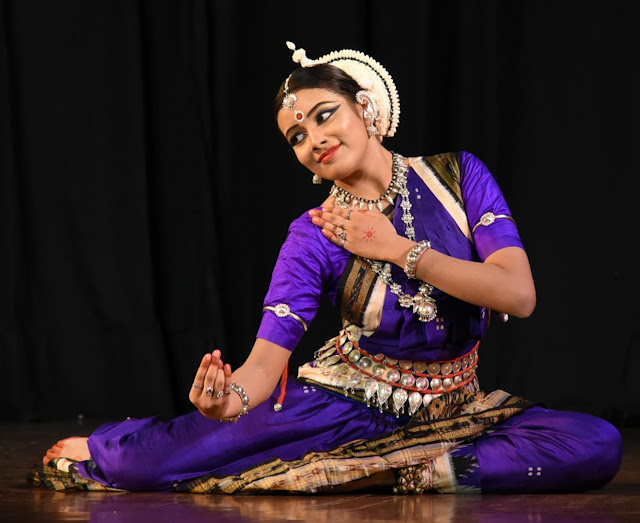 The lord is praised as the ‘jagat dhaaram’, with snakes on his body, wearing tiger skin, the pashupati, with his trinetra, jataa, Ganga, and finally, the stance of Shiva with damru and agni in his hand, and the other two hands in the Nataraj posture. Arnaz has a thin frame and her tribhanga and swaying movements were good. The foot movements were executed with ease, especially the way she arched her foot. The nritya with stances for Shankara were done very expressively, bringing out the raudra roop of Shiva. 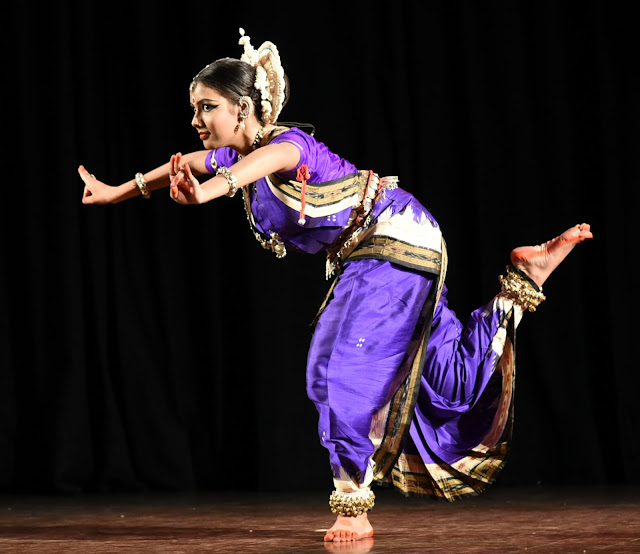 The next piece was an ashtapadi in raag Pahadi, taal triputa, called ‘Sakhi he keshi Madana udaram’. Radha tells her sakhi about her pining for Krishna as she reminisces about her first meeting with him. Everywhere, lotuses are blooming, birds mating and bees humming. Radha is struck by the arrows of Manmatha as she goes down memory lane to the prathama samagam or the first meeting. In the night, as Radha covers herself with an odhni and removes her anklets to leave for her meeting with Krishna, again, the technique of footwork was highlighted, and the nritya was sensitive and delicate. They meet in the nikunj, madhurasmit (smiling gently). Krishna pulls her saree and they kiss. In this piece, Arnaz did a squatting position in which she went around tapping her foot, the body showing a lot of flexibility. 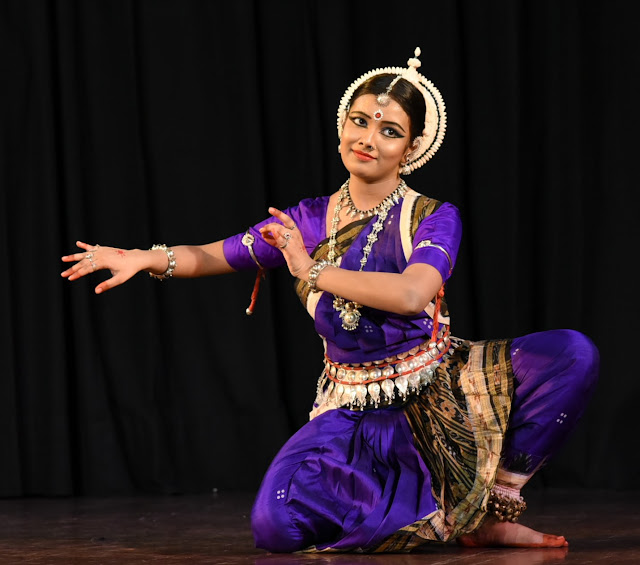 Finally, she performed a pallavi in raag Hamsadhwani, taal triputa. The jerks and fluidity of the tribhanga and torso movements were well-executed. The pace of the music and footwork, the expanse of the movements, energy and stamina, all were commendable. Her final piece was a Meera Bhajan, ‘Jhuki aayi re badariya sawan ki’, befitting the mood of the season, in raag Megh Malhar, Miya ki Malhar and Chandrakauns, taal triputa and ektaal. The choreography was by Kavita, with music composition by Suresh Kumar Sethi. The rains have arrived with the clouds, it said, and nature shows signs of love. The birds are mating and the bees hover on the flowers. Krishna, with his flute, ear ornaments - makarakriti kundal – and morpankh, attracts the nayika. They meet and playfully splash water on each other. Arnaz did a peacock dance in which her neck movements and hand movements were done very gracefully. The entire piece had abhinaya rendered aesthetically. She has a lot of promise.
The second performers for the evening were Jayarama and Vanashree Rao’s disciples, Ranjini Nair and Moutushi Majumdar. The first piece performed was a duet, a composition of Shri Papanasam Sivam in raag Hindolam, aditalam, called ‘Hari Hara’. As the name suggests, it was a piece drawing parallels between Shiva and Vishnu. One resides on Kailash, and the other reclines on the ksheer sagar (ocean of milk). One is the Umaramanam, and the other, Lakshmiramanam. Vishnu was shown through stances and mudras to have shankh, chakra, gada, Padma, reclining on the shesh shaiyya, with Lakshmi at his feet. Shiva, on the other hand, has snakes, jataa, Ganga, agni and damru. 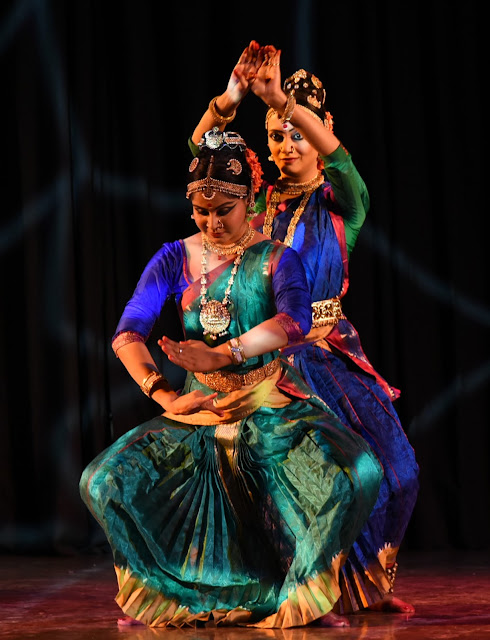 The two dancers wore costumes which were complementary – they had the same two colours, but in opposite combination – designed by their guru. They had good coordination, and the stances and the postures taken to depict the two gods were done very soundly. For Vishnu, the Gajendramoksha was shown with great aesthetics. When the gaja goes to the river to drink water, its leg is caught by the crocodile, and Vishnu, with His chakra, delivers the elephant from the death grip. Shiva, on the other hand, drinks poison – becoming the Neelakantha – during the samudra manthan. The footwork, pace, grace and stances again held the audience. 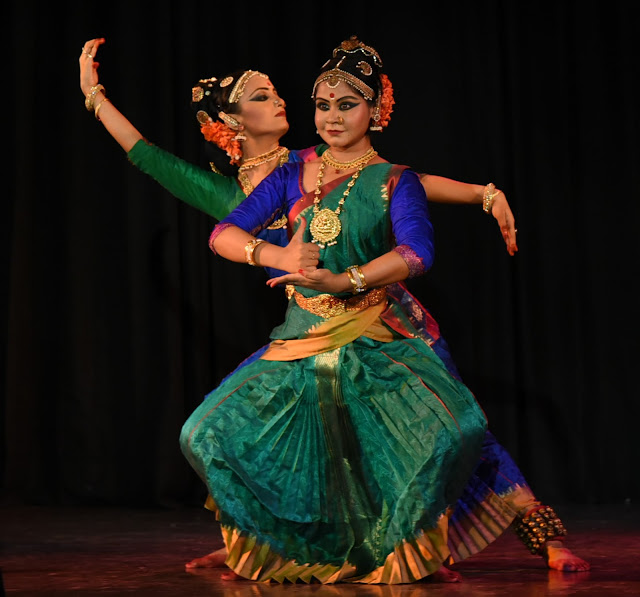 The second piece was an ashtapadi, ‘Radhika Krishna’, by Jayadev, performed by Ranjini. Here, the sakhi tells Krishna that Radha is forlorn in her separation. She is sitting with her hand on her face like the half crescent moon. Her necklace is like a burden on her breasts, she doesn’t like the chandan to be applied to her, which seems like lava to her skin. The sakhi is fanning Lord Krishna and telling him to go and meet Radha. The piece was based totally on abhinaya, and Ranjini was able to do justice to it.
Moutushi performed a solo, the Meera bhajan ‘Barse Badariya Sawan Ki’, which Arnaz also performed. The lyrics of the bhajan catch the playfulness and beauty of the season. The wet earth gives off its fragrance, the birds chirp and the trees bear tender leaves. The abhinaya depicted Krishna as being as dark as the rainclouds. The breeze brings the sound of his flute and the fragrance of his chandan. He comes with his morpankh, herding his cows. The peacocks look at the clouds, spread their wings and dance.
Here, a special mention of her movements as a peacock, her leaps, grace, footwork and agility, would not be out of turn. They play while splashing water on each other. The clouds are thundering, lightning is illuminating the sky, and the wind is howling. Rain lashes and drenches them both. Moutushi’s expressive eyes and technique were apparent in her rendering of the piece. She had a very seasoned approach to the abhinaya. 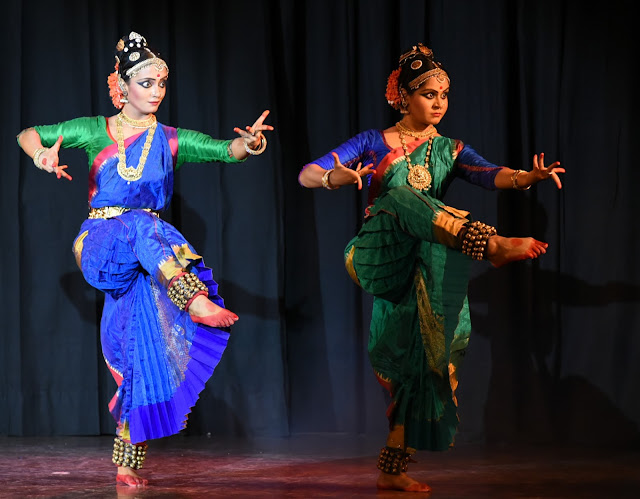 The final piece was the Dashavatar in raag Mallika, adital, a composition of Vempati Chinna Satyam. 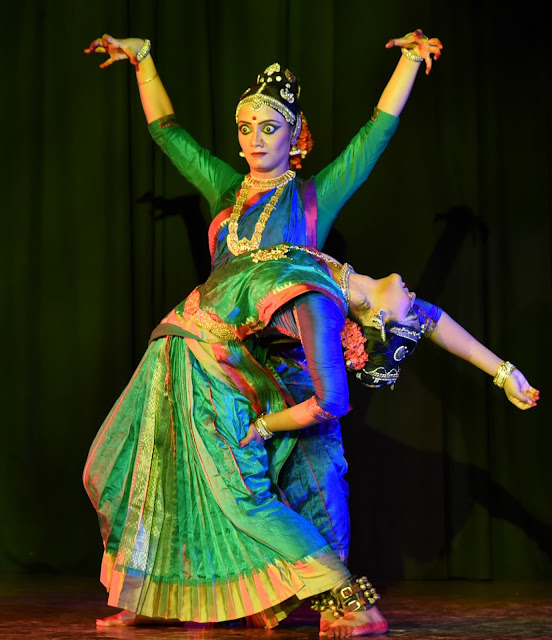 The dancers took postures to depict the dashavatar, interspersed with nritta, finally depicting Lord Vishnu as reclining on his shesh shaiyya, and as Krishna with his bansuri. The music was so rapid that the coordination and the sync for the duet was a challenge. The abhinaya for depicting the avatars was done well, particularly that of Vaaman, Narsingh and Kalki. 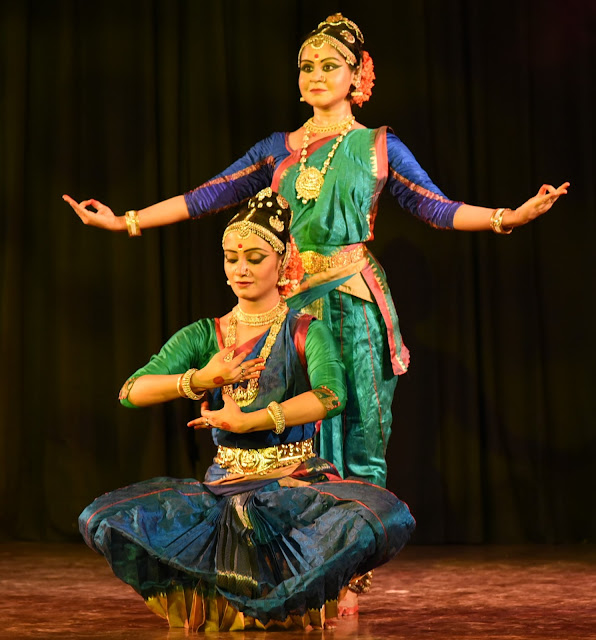