Tribute and technique in a dance of passion 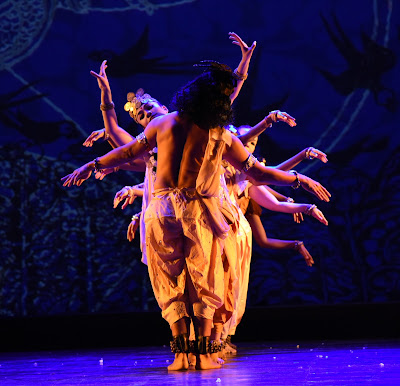 Amid all the conversations about ‘culture’ in India and the various efforts to define it, last month, veteran Malaysian Odissi exponent Datuk Ramli Ibrahim presented a production called ‘Amorous Delight’ at the Kamani auditorium in Delhi. Eroticism is intrinsic to Indian culture as seen in a very different perspective from the ones dominating the discourse today. Our ancient temples and caves have paintings and sculptures of nayaks and nayikas in various postures of lovemaking. Shiva and Shakti, the father and mother of all creation, are depicted in temples in various stances of erotic love. This dance of mating is seen in many other species in nature, besides the human. Radha and Krishna have a lot written about their leelas. In fact, all this has been created by yogis and rishis who have already left worldly pleasures behind and gained control over their senses. In fact, these poems and sculptures take them further towards their spiritual goal. 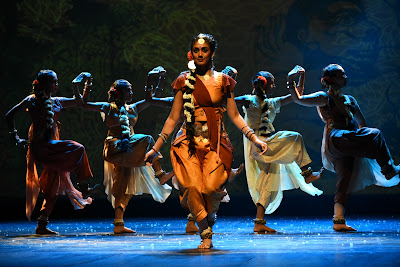 Ramli is a Malaysian cultural icon who has performed internationally for four decades. He is the chairman of the Sutra Foundation, and has choreographed some stunning works and nurtured some of the brightest dance talents from Malaysia. He is one of the best known exponents of the Debaprasad Das style of Odissi, and has learnt Bharatnatyam from Adyar K Lakshman as well. 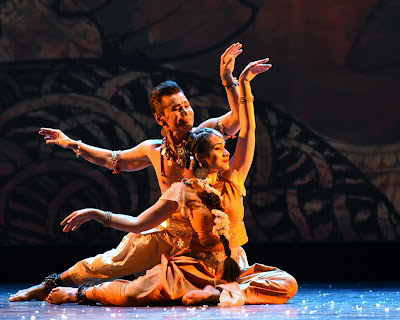 Amorous Delight is contemporary Odissi, with dance composition and artistic direction by Ramli and the Bhubaneswar-based Meera Das. The inspiration is from the ninth century Amarushataka, a Sanskrit anthology about shringara rasa. Leela Venkatraman, or Leela mami as she’s called in dance circles, was called on the stage to explain the concept of Amarushataka. The production is a tribute to the late Dr Dinanath Pathy, a well-known visual artist, art historian, curator and educationist from Odisha. He passed away last year. This production was presented in collaboration with him and Sutra Foundation. 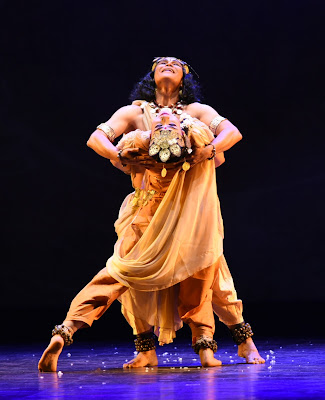 A reference by the 9th century commentator Anandavardhana is one of the strongest indications of who wrote the seemingly disconnected verses of the Shatakam. He was known as Amaru, Amarake or Amareka, and placed in the ninth century. He was a king of some place, but it is not definite which. There is also the story that these verses were written by Shankara, who was asked about erotic love. But Shankara, being a celibate, could not answer any of those questions. However, he had the power of parkaya pravesha. Amaru the king had just passed away, and Shankara entered his body. Amaru had a lot of wives, so while he had a dalliance with his wives, Shankara wrote this beautiful poetry. Shankara then went back to his body, and Amaru, who had been revived, passed away. 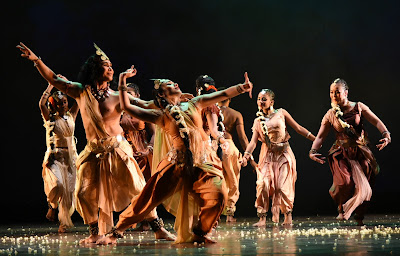 The poetry is a special definite form. It is an anthology of verses. The poems are penned by one poet and yet, they are all independent. There is no narrative, though a theme runs through the verses. Each verse is a separate one and is not connected in any way to the verse above and below it. It is amazing how they discuss unselfconsciously erotic love. It’s not only the physicality but the mental landscaping of the people in love. You have insane love, jealousy, ecstasy – love’s every facet. Ramli selected a few of these verses with the help of Dinanath Pathy, and made little incidents out of them. 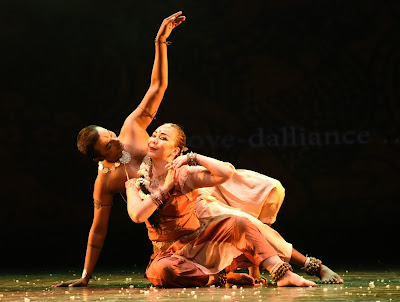 The choreography has been done in collaboration with Meera Das. “The choreography was a challenge, since it was interpreted by seeing the beautiful paintings on palm leaf manuscripts, and Ramli has risen to the challenge,” said Leela Venkatraman. 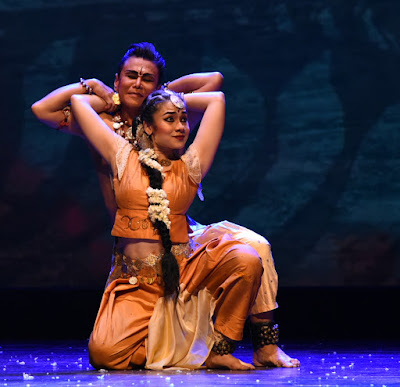 The two-dimensional rendition of paintings in the pothi or palm leaf of Amarushataka was further nuanced with Pathy’s drawings. The lighting, designed by Sivaraja Nataraja, further complimented Dr Pathy’s design. The costumes by Malaysian designer Dato Bernard Chandran were very aesthetic. The costumes were in earthy colours, which was unconventional for Odissi, and in shades of beige and brown. The texture of the material was very flowy, with a little bit of bling. The jewellery had many little hanging pieces, with a lot of bling. White flowers lay scattered on the stage, which gave the entire stage a very ethereal look. 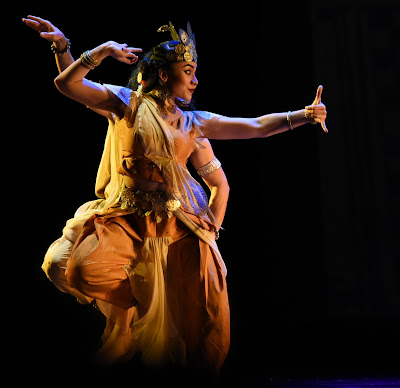 The first piece was about the dance of the goddess Ambika with Shiva, as they conspire to release the flowery arrows of love at the maidens. Ambika appears bearing the bowstring in the katakaamukha hand gesture. She leaps forward with great force as she releases her flowery arrows. 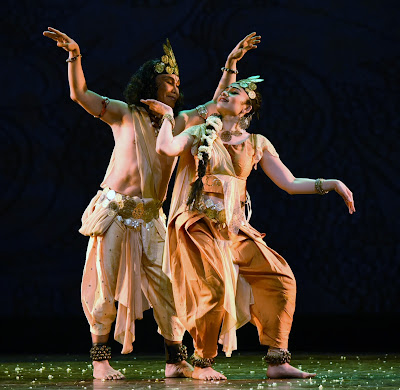 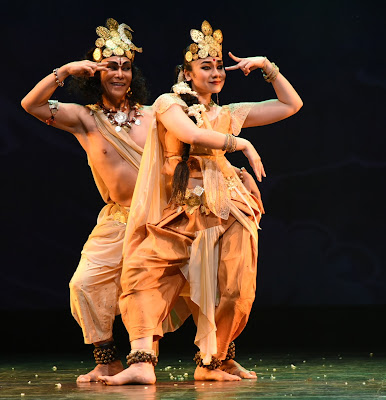 The sweetly scented flowers dart quickly, piercing the maiden's hearts, and they are consumed with love. Depicting the scene, Ramli as Shiva, and a Sutra dancer as Parvati, are standing with their legs crossed across each other. As the paintings in the background show, Ambika walks in with a bow and arrow. 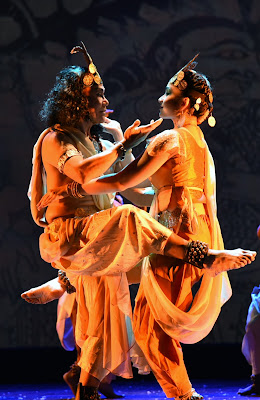 The flowers are blooming and the bees hovering over them. The looks by Parvati invoke a fire of desire and the heat of love. The two marry and finally, Ambika stands with her foot on the bent knee of the leg of Shiva. 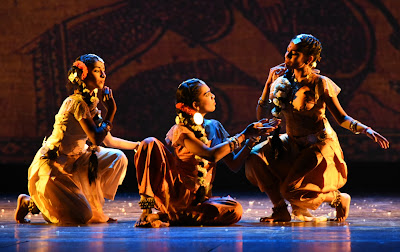 The second shloka speaks about the nayak not appearing at the appointed time. The nayika is annoyed and turns him away. But he lovingly kisses her to win her back. This experience is greater than any nectar. The nayika is with her friends, and is going to fetch water with clay pots on their heads. 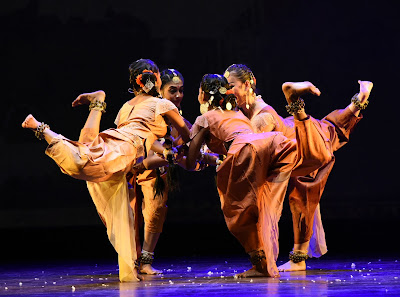 They collect flowers and make garlands. She wears her odhni and then it is her own beauty that makes her blush. The footwork for this piece was very delicate, with twisting feet.

In the next shloka, the two lovers are sleeping in their bedchamber and the nayika, who awakens, feasts her eyes on the face of the nayak. 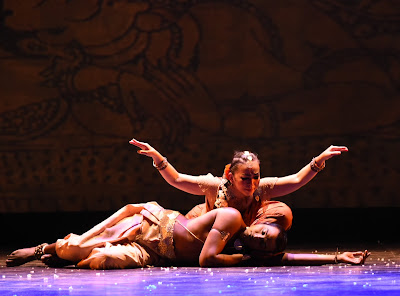 She kisses him and caresses his body. In the depiction, the suggestion of love is sometimes more evocative than the actual act itself. The nayak is shown to be in deep sleep and the heroine places a soft kiss on his cheek as she admires him. 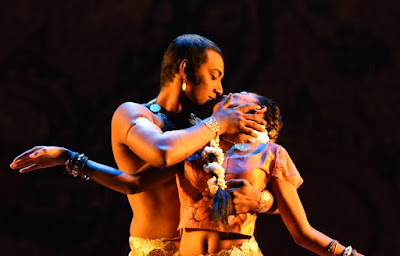 She gently caresses his body. She is not shy to do so – ‘visari kula kan’. The stances taken by the dancers were very suggestive. In one stance, the male dancer lifts the female while lying down.

In the next scene, while they have a love dalliance and sleep together, the other woman comes along looking for him. He leaves the nayika and goes to the other home. 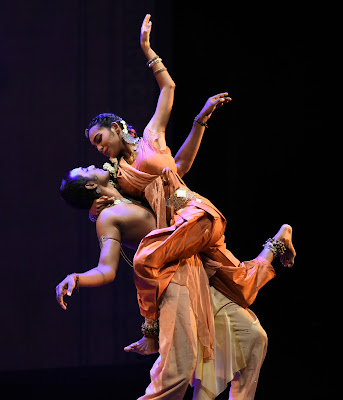 When the heroine awakens and does not find him with her, she becomes desperate. She is furious with him for cheating on her, but her friends try to placate her and tell her to give up her pride and make up with him, since he is regretting what he did and pining for her. 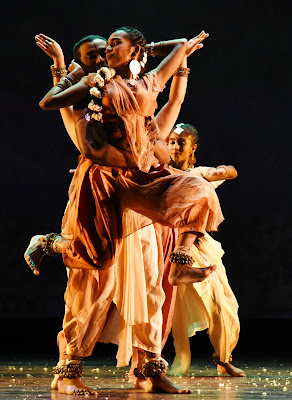 In the next shloka, the young nayika is waiting for her beloved. She has strung her glances, like flowers, in a garland above the entrance. Her smiles are a bouquet of jasmine flowers for him. 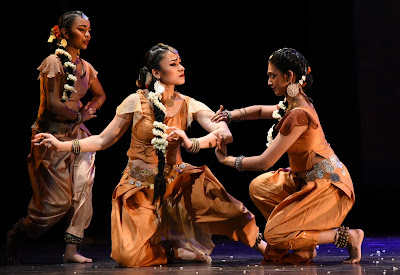 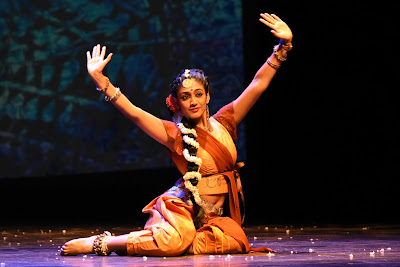 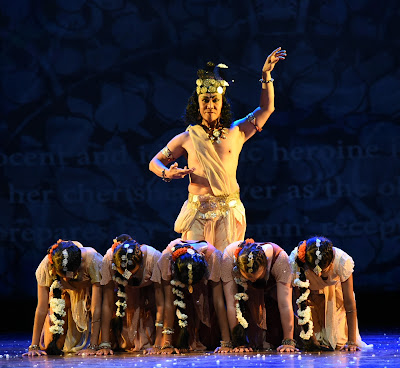 Her breasts, with the dew of perspiration, are the pots for offering water to him. Her body is a toran, he is her lord, and she worships him. She adorns herself and beautifies herself. For this piece, Ramli, dressed as Shiva, danced on to the stage and took a reclining pose on a bed of dancers kneeling down. 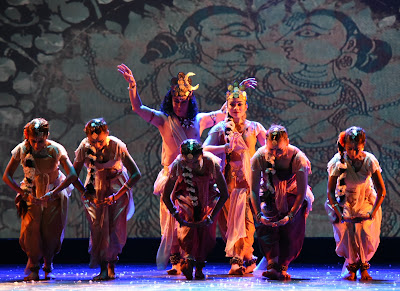 The sixth piece was a dance choreography by Guru Pankaj Charan Das. The composition was a Shankarabharanam pallavi. The young dancers danced the pallavi with a lot of expertise and energy. Shiva, danced by Ramli, and Ambika are both possessed by love. They took various stances to show the love dalliance of the two. One of the stances taken was the male dancer lying down on his stomach, and the other dancers piling on and lying down on top of him. The last stance was a particularly evocative one. 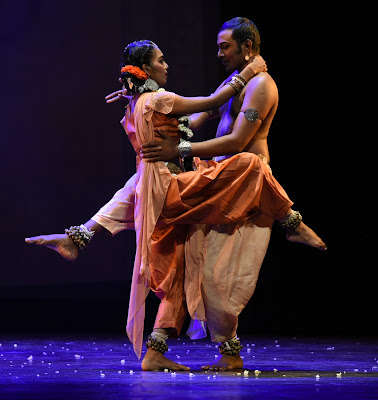 The participating dancers were Geethika Sree, Divya Nair, Harenthiran, Tan Mei Mei, Vetheejay, Mridulla Kannan and Vaishnavi and Mathuri Raja Bhalu. The music composition was by Srinivas Satpathy, rhythm composition by Guru Dhaneswar Swain and music notation by Ramarao Patra. Lighting design and production direction were by Sivarajah Natarajan, the literature and visual consultant was the late Dr Dinanath Pathy, the motion graphics were by Abtin Javed, stage management was by Enya Khanna and the graphic design was by William Harald-Wong and Associates and Zarina Othman. Biefly, it was a nearly perfect production, with interpretation, execution, aesthetics and the artistic liberties in technique that Ramli is known for.