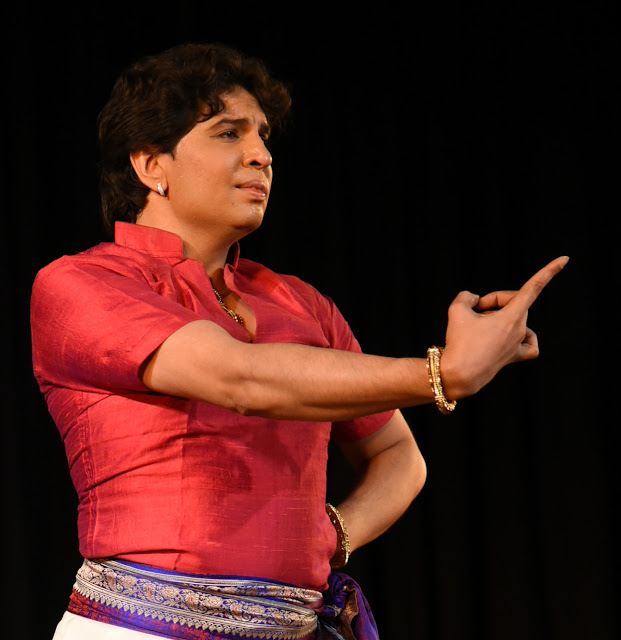 The World Dance Day celebrations curated by Guru Geeta Chandran were held at IIC on the 29th and 30th of April. Aniruddha Knight, as a part of the celebration, had a solo performance in the evening. The grandson of the celebrated Balasaraswati amma and the son of her daughter Lakshmi Knight, he used to sing for his mother, and then he himself became a dancer. He was initiated into Bharatnatyam by his grandmother, and received vocal and Bharatnatyam training from his mother. In classical music, he received further training from T. Muktha and T. Viswanathan, and currently from Smt. Veghavahini. In dance, he continues to take advanced lessons from Shyamala Mohan, one of Balasaraswati's key disciples. 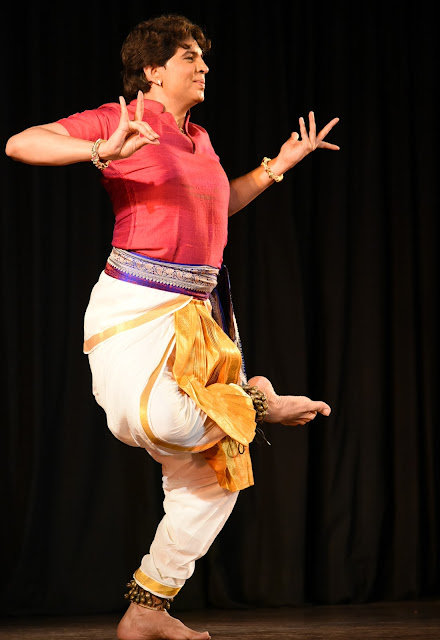 Aniruddha’s tall frame on the stage was imposing. He said that it would be a margam performance, and that “the nritta is all choreographed and is passed down the generations, but the abhinaya is manodharma”, and he hoped that he would be able to win the hearts of his audience with that. The flute played by the flautist for the first piece was very melodious. It was an alarippu and Aniruddha’s execution was quite effortless. 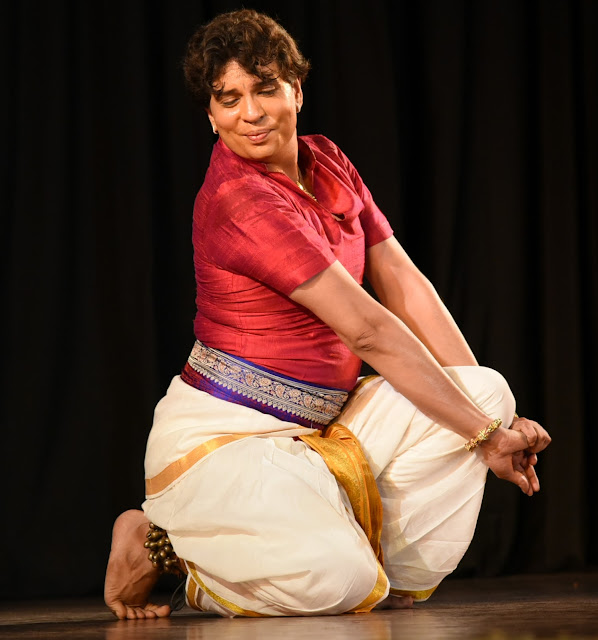 The second piece was a varnam, Mohamana, in raag Bhairavi, roopak talam, by the Tanjore quartet. The text of the varnam says that the nayika or the bhakta craves for the lord, since she is infatuated with him. Though he resides in a huge city in a temple with huge domes, she craves for his love. She pines for his embrace, and every minute seems endless. Manmatha is showering his arrows on her, the cooing of the cuckoos hurts her, the wind makes her body inflamed, and the cool light from the moon burns her body. She is pining for the lord. Aniruddha’s nritta had pace, energy, precision in hastas and footwork, but his eye movement and neck movements were slightly subdued. Plus, for a varnam, he took some pauses and his style seemed to me a little casual or informal, which I’m perhaps not competent to comment on. But the abhinaya was as impressive as he had promised. 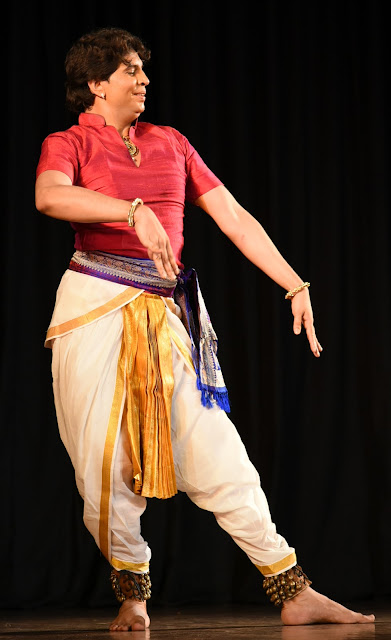 The third piece was a padam in raga Gowli Pantu, chapu talam, a composition of Kshetrajna. The poet describes Krishna with his lotus eyes as he is herding the cows and playing on his flute. Gopal appears with his golden vastra, indulging in raas with the sakhis, kissing the nectar of their lips. He places a flower in the nayika’s hair and her heart is thrilled. The flute creates tremors in her entire body. The nectar from his leela flows. 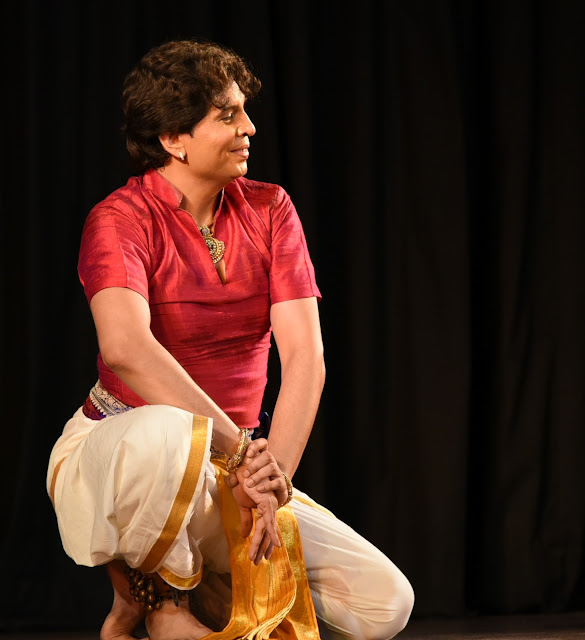 The last piece, Krishna Ne Begane Baro in raag Yaman, was beautifully rendered. Mother Yashoda embraces her son, who playfully runs away. She tucks her saree and follows him. Praising him, she tells him that the moon shies at his face. The kundal in his ears brush his cheeks. There is chandan on his feet and the anklets make a twinkling sound. His neel badan (complexion like the clouds) steals hearts. She gives him bhog and wipes his face as she makes him wear the peetvasan. Shrigandh is applied. The mother sits down to churn butter, but a while later, he’s caught stealing the butter and she playfully hits him. She sees the entire universe visible in his mouth. She gets a vision of Lord Vishnu reclining on the shesha shaiyya, and goddess Lakshmi at his feet. The abhinaya for the piece was very expressive. 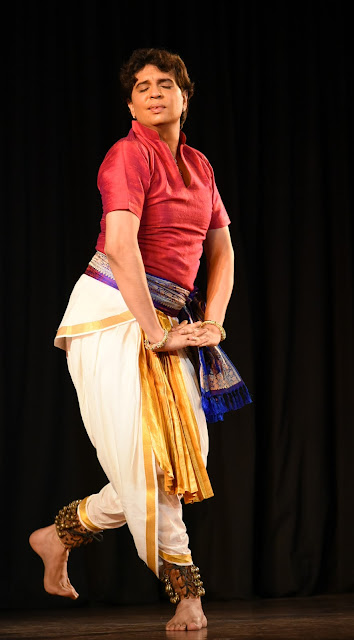 Aniruddha then went on to depict the episode of the dice game between the Pandavas and the Kauravas. The Pandavas lose Draupadi to the Kauravas in the gamble, and Duhshasan pulls her saree as he grabs her hair. But he is tired of pulling the saree, which does not end. Finally, he gives up.
This was followed by an aarti. Now the mother pleads with him to come back to her as her child. She prays to ward off evil spirits and looks at her Gopal. The abhinaya was expressive, well-rendered, interpretive and quite engaging. It really left a mark. Since Aniruddha is a singer as well, he was emoting and singing along too. 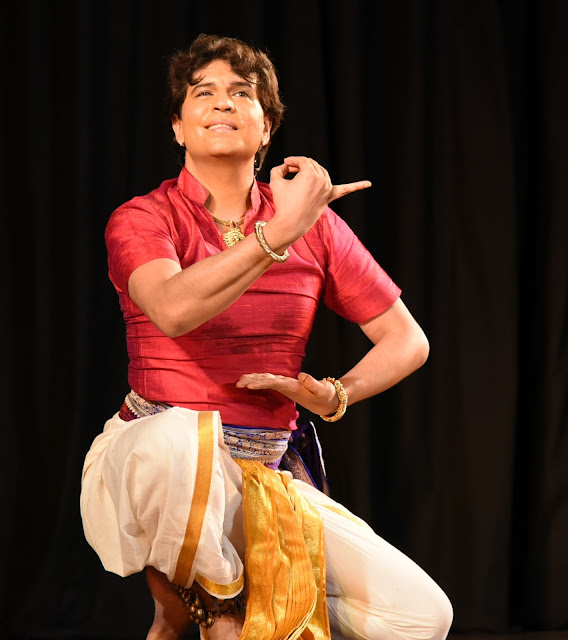 He was accompanied by TR Murthy on the flute (he had originally played with Balasaraswati), Usha Shivkumar on vocals, Douglas Knight, Anirudha’s father on mridangam and Rakesh KP on nattuvangam. 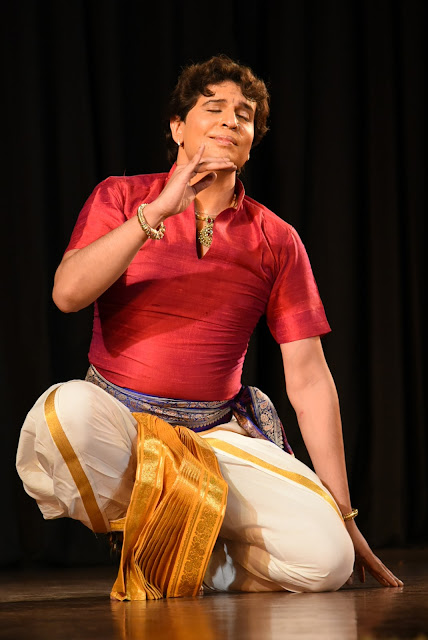