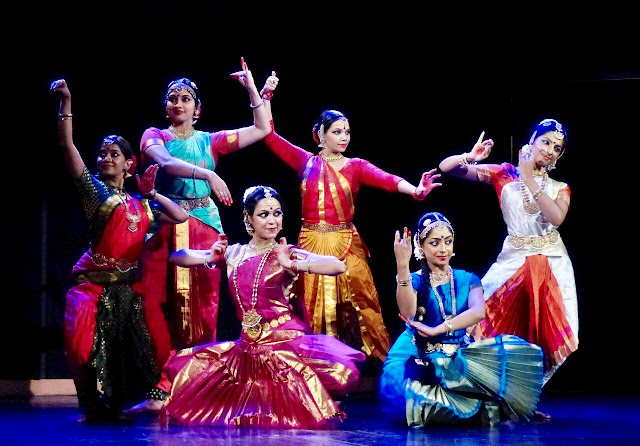 Divya Pushpam was held at IHC, Delhi as part of the Divya trilogy - Divya Astra, Divya Vahana, and finally, Divya Pushpam. Every deity has a flower associated with him or her, which complements the attributes of the god. Flowers in Hindu mythology hold a special significance as they are used as offerings to the Lord. A flower in general gives us pleasure with its beauty and fragrance.

Firstly, the concept was unique - choosing to depict a flower, its shape, size and significance. Then, all the dancers depicting the flowers were young and energetic, and finally, they were asked to choreograph the pieces themselves, which made the performance a very special experience.
Japaa


Associated with Mahaganapati, and essayed by Keerthana Ravi, a student of Smt Padmini Ramchandran. The presenter of the evening, Usha RK, explained that the japaa or hibiscus flower grows in abundant sunlight and produces large, funnel-shaped flowers with soft petals and attractive, large stamens. They are seen in a wide range of colours. ‘Japaa kusuma sankasam’, the surya shlokam, compares the sun and the japaa for their brilliance and radiance. The japaa plant rises from the earth and grows towards the sun.

The dance was in the format of an alarippu, which means the blossoming of a flower. The red flower is associated with Lord Ganesha. The beej mantra, gan vam ram, compares the red Ganapati’s form to the japaa. Ganesha begins the process of self-realization since he is the presiding deity of the muladhara chakra. The japaa says:
‘I am just like my maker.
I am just like my maker, easily accessible to everybody.
I do not need too much sunshine, nor too much rain.
Neither am I perched up on the tree, nor do I have thorns.
Just like Ganapati, who sees no caste nor creed, rich nor poor, but visits every home every year.
I am just like my maker, cyclic in nature; just as he visits our home year after year, I am born, I bloom, I wither away, continuing the cycle of life and death.
My karma lies in decorating the tree,
My moksha lies in decorating his feet.
I am just like my maker.’

Keerthana wore a red saree for the performance. She depicted the seed becoming a sapling, swaying in the wind, using a broad plie. The sapling grows and flowers. Then she went on to depict Ganesha with his elephant ears, trunk and round stomach – ‘gam gam Ganesham’. The Lord pics the flowers with his trunk and puts them on himself. Keerthana had immense energy, technique and expressiveness to take the stances she used to depict the Lord and the flower. The performance reached a crescendo with Ganesh pooja and Marathi arti ‘Sukhkarta dukhharta varta vighnachi’. Keerthana ended the performance with hand postures to depict the hibiscus flowers.
Paarijaata


Associated with Lord Krishna, and performed by Matangi Prasan, a disciple of Smt Sandhya Kiran and Smt Kiran Subramanyan. Matangi was excited about portraying a romantic flower. She said she got to explore shringaram and to choreograph something beyond the Bharatnatyam margam.

Paarijaata is a flower associated with Mahavishnu, used as a metaphor for Krishna. The night coral jasmine is a white flower with an orange stem. It spreads its fragrance in the night. The dancer depicted the narrative ‘Paarijaatapaharna’ with Satyabhama as the protagonist. Satyabhama, the young queen of Krishna, is very smug about her beauty, with the attitude presented very well by the dancer. She is awaiting the return of Krishna from Indralok, but he enters the chambers of Rukmini. He gives her the Divya Paarijaata flower. Satyabhama is saddened by this and feels jealous. Krishna sows the tree for her, but when the tree blooms, it falls into Rukmini’s side of the garden. But Satyabhama accepts it and continues to nurture the tree with unconditional love.

Matangi wore an orange and white saree, depicting the flower and the waving of its makarand or pollen. The scent of the flower is very sweet – ‘maadak gandha’. In depicting Satyabhama waiting for Krishna to come to her chambers, Matangi captured the attitude of a queen, who is very sure of her beauty and her power over her husband. She’s waiting for him to put the flower in her hair. When he does not turn up, she’s annoyed. She says he has a ‘katu hriday’, a hardened heart, and ‘vivek shunya’, no love. When he finally comes, she brushes him away and blames him for his partiality, ‘pakshapat’, and tells him to go away while she sulks. Krishna sows the tree and she nurtures it with a lot of care, but when the flower falls into Rukmini’s side of the garden, she tries to destroy the tree by chopping it, loosens her hair in her anger and finally, breaks down to accept the reality. Matangi’s abhinaya was very expressive and touching.
Nagalinga pushpa

Associated with Mahashiva and depicted by Radhika Shetty. Radhika is the disciple of Rama Vaidyanathan and Bragha Bessell. These flowers bloom in large bunches, up to 80 metres long. One tree can bear 1000 flowers per day. They flower profusely, and are strongly scented. The flower is large, about 6 cm wide, coloured bright pink or red, and yellowish towards the tip. The stamens are arranged to form a hood, which looks like the hood of the snake on the Shivalinga. The associated literature says that the devotee entering the temple falls in love with the flower and strikes up a conversation with it. “Looking at you ignites the form of Shiva. The Lord was cursed by rishis and takes the form of a linga. The red and white of the flower remind me of Sumeru parvat, and the ardhanari, the female half of Shiva. Worshipping the pushpam takes us to the Supreme Lord.”

There were rhythmic jathis to depict Shiva, ‘namah Shivay’. Radhika depicted the wrath of the rishis. The flower was made to resemble Parvati. Radhika did slow, calculated movements, standing in a broad plie, taking the posture for the flower. The red fan of the costume would open up in the form of the petals of the flower.
Shankhapushpa


Associated with Radha Rani and depicted by Gowri Sagar. Gowri is the disciple of Sathyanarayana Raju. She said that connecting with the flower was something new to her, and she enjoyed the music and the choreography. Shankhapushpa grows on a creeper commonly known as the butterfly pea. It is called the Aparajita in Sanskrit. There are white and blue flowers. The flower looks like a conch shell. Sri Aurobindo said that this flower is part of Radha’s consciousness, and she is the personification of absolute love of the divine. Aparajita literally means one who cannot be conquered. Gowri wore a blue saree and depicted the flower blooming on a creeper. The tale is that after Krishna goes away to Mathura, virahini Radha is pining for him. She sees the flower on the banks of the Yamuna and falls in love with it since it reminds her of Krishna. It is its colour and its texture that she falls in love with. The hood made by the petals remind her of Kaliyamardana. Radha is reminded of the way Krishna was looking at her while he was dancing on the Kaliya naga. And then the realisation that Krishna is not away from her, but in her aatma and in every breath of hers. Finally, she says, I will spread the fragrance of love like you, Aparajita – ‘main bhi hoon Aparajita’.

Gowri did some riveting abhinaya for the piece, showing Radha reminiscing about Vrindavana - the peacocks, the bees, the Yamuna and her love for Krishna, the embrace and the kiss. Her expressions of Krishna as he watches Radha while dancing on the Kaliya, holding, with one hand, the serpent’s tail, were rendered well. Finally, she brought out the climax in a very touching manner, reciting again ‘Main bhi hoon Aparajita’.
Kadamba

Associated with Mahadurga and depicted by Sneha Chakradhar. Sneha is the disciple of Guru Geeta Chandran. About the literature, she said that her father had written the lyrics. “I have gained a lot from the choreography and I want to expand it further,” she said. The kadamba is a round, ball-like flower that Aryabhatta compared to the globe. The ball is surrounded by flowers on all sides, a beautiful representation of the planet. It is dear to Tripurasundari Durga. The flower exudes a fragrance that attracts birds and bees, and is a key component in the making of the scent of sandalwood. The tree blossoms in the monsoon and it enriches the soil. Kadamba vanavasini resides in the forest and is akin to the wilderness. Lord Krishna, who is Durga’s brother, plays his flute in Vrindavana under this tree. The two play a ball game with the flower, kanduka krida. The tale told was that of Karthabasur, who, after receiving a boon of invincibility from Lord Shiva, defeated the gods. Devi Durga came to the rescue of the gods and took the form of the kadamba tree, and annihilated the army of the demon by setting them ablaze. Sneha’s costume was a yellow and red saree. Her depiction showed the tree blossoming in the anand kanan, where the peacocks are dancing and the clouds come and go. Krishna and Durga play with a ball. When Karthabasur attacks the gods, Tripura Sundari reduces him to ashes. The abhinaya by Sneha was very powerful and the technical dance portion was immaculate.
Padma


The lotus, associated with Mahalakshmi, essayed by Arupa Lahiry. The lotus is seen in different colours. Blue symbolizes the victory of the spirit over wisdom. White is bodhi or awakened. Purple is mystic or esoteric. The pink lotus is the supreme lotus, and red is associated with love and compassion.

The story depicted first was that of Rama, who, when he sees Sita, feels that Sita is the embodiment of the lotus. She is lotus-faced, lotus-eyed, and the hovering bee is Rama’s heart.
The lotus moves from darkness to light. It is shaped like the eye of Lakshmi, the eye which destroys ignorance. It is the seat of Lakshmi in the thousand petal form. The human body has six chakras. Each chakra has a different petal florus, and in each lotus sits a devi holding different objects. The portrayal had the lotus as the pushpa kulabhushan, the crown of the family of flowers. The flower was shown as blossoming and the bee hovering over it, as Lord Vishnu reclines on the shesha shaiyya, the lotus emerges from his navel. The chakras and lotuses depicted were:
Mooladhara chakra - Mooladhara Ambuja Ruda Devi (4 petals)
Swadhishthana chakra - Swadhishthana Nambuja Gata Devi (6 petals)
Manipuri chakra - Manipurabaja Nilaya Devi (10 petals)
Anahata chakra - Anahatabaja Nilaya Devi or Rakini (12 petals)
Visuddha chakra - Visuddhi Chakra Nilaya Devi (16 petals)
Agneya chakra - Agneya Chakrabaja Nilaya Devi (2 petals)
Sahasradhara chakra - Shri Sahasra Dala Padmastha Devi (1000 petals)

The depiction by Arupa was awe-inspiring. The abhinaya of Rama seeing Sita as a lotus and his heart like a bee was aesthetically done too. She has emerged as a dancer with immaculate technique and exactitude of footwork and hastas.

Arupa is a disciple of Chitra Visweswaran. She said she had picked up the traditional format, the pada varnam. “The lotus has many significances and I chose the 1000-petalled one. The lotus is also a metaphor in poetry. A varnam is cyclic and so is the lotus.” About the choreography she said that she listens to the music and allows it to carry her; that is how her guru has taught her to choreograph a piece.