A world of dance in a World Dance Day demo 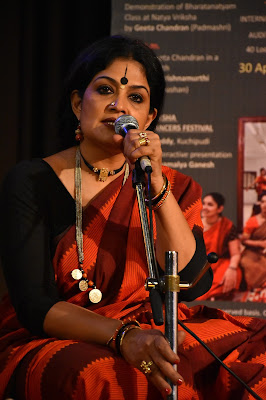 It is because of some people who are carrying aloft the flag of activism that classical dance is alive and thriving. Geeta and Rajiv Chandran of Natya Vriksha are among those people. And like in so many past years, this year too, they organized World Dance Day celebrations on the 30th of April and the 1st of May at the India International Centre in Delhi.

There’s a doha by Kabir – ‘Guru kumhar shishya kumbh hai, gadi gadi kaade khot, antar haath sambhal de, baahar det hai chot’. It means that a guru is like a potter who supports the pot from the inside, but moulds it by applying force on the outside. That’s exactly the kind of experience I had at this public demonstration of a Bharatnatyam class by Natya Vriksha. The young dancers of Natya Vriksha displayed how they are given physical, emotional and mental training by their guru, Geeta Chandran. Until you see a session like that, it is difficult to fathom the effort that a guru makes, and the answering effort a disciple makes to learn the art of dancing. 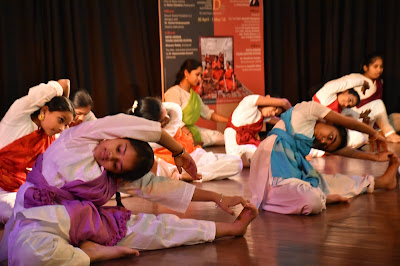 The atmosphere in the auditorium was heady with the thick smell of mogra flowers. The first batch of disciples were the beginners, who started with a prayer. This was followed by a set of exercises. Geeta said that often dancers have to pay a price for not doing warm-ups. The exercises were meant to strengthen the back and the core. She reiterated that certain exercises are essential, and a few can vary according to the body type. The regimen included jumps for their weight, slow and fast sit-ups, forward bends, knee exercises, feet exercises, the butterfly, back rotations – clockwise and anti-clockwise – araimandi, toe exercises and adavus. The exercises were learnt by Geeta during a cross training with a gym instructor. The exercises are intended to strengthen the muscles and bones of these young dancers and increase their stamina. 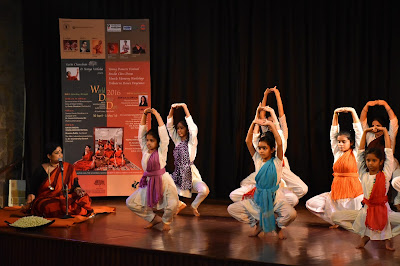 The group next performed a fast-paced alarippu with very good timing, and then a jathiswaram with a counter-rhythm. This involved joining the korvais with fillers in rhythm. This was followed by jatis - tat tai taha, tai ya taihi, tai yum tat tat tai yum taam. Geeta explained aspects of geometry, symmetry and linearity of movement and how they should register in the spine. Geeta said that when they were taught, a lot of focus was on the feet movements. Greater importance was given to the position of the feet, the strength of the talam, the grammar of dance and how much you should lift your feet with how much strength.

Anita on dance and the body 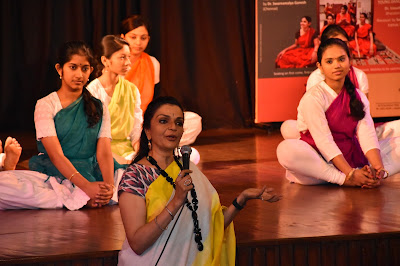 While the next batch of students was getting ready to take the stage, Dr. Anita Ratnam spoke to the students and the audience. She said she was lucky to have started training in dance at the tender age of three-and-a-half years, even before her bones were fully formed. Her first guru was Raji Narayan. For her at that age, dance was like play – she sat in her guru’s lap and was thoroughly pampered. Her arangetram was at her mama’s (maternal uncle’s) wedding, and even though she had hurt her back, she was asked to perform. This was when she felt what it meant to make a commitment and honour it. She attained her perfection under Adyar Lakshman and it was he who advised her not to go for tennis and swimming, though swimming now is considered good for dancers. Later, she joined Kalakshetra, where they would start with multi-faith prayer – everybody had to learn Tamil to get accustomed to the lyrics of the piece. She learnt dance for some time from Chandralekha, who would promote flexibility in the hip joint. She would make the students hold a pole and move their legs back and forth. In Kalakshetra, every dancer had a partner who would support the legs from behind.

Yoga and dance are the same, Anita said, where you have both sthiram and sukham. Lord Vishnu is reclining on the Adi Shesha, and the image shows sukham for the Lord, but the coils of Shesha move with the water to give stability – that is sthiram. Anita said that every dancer should think of herself or himself primarily as that and take care of their bodies, since the body changes every five years or so. Krishnamachari, a yoga guru, said that dance is like a finishing school. The dance guru becomes a confidant, a teacher, a psychological counsellor and what comes out as a product from a dance school is a well-rounded human being. 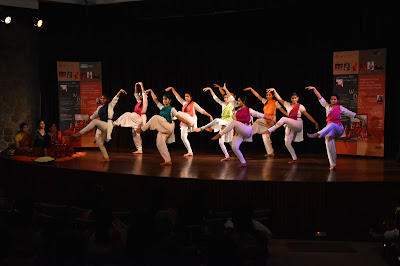 The next batch of students were those who’d been learning since 8-9 years of age. They participated in a varnam class in which balance, pace, abhinaya, grammar, technique - all were taught. “A jati can be re-choreographed to suit the need of the varnam’s poetry, so that in totality, the varnam can be made more interesting,” said Geeta. “They learnt how to put in fillers and reinforcements into movements.” 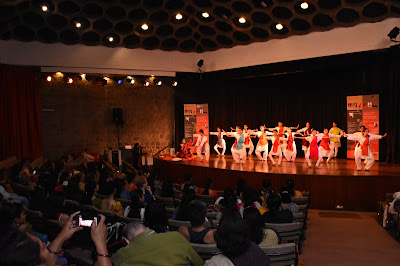 They performed a jati by Guru K.N. Dandayudhpani Pillai. In the pure dance segment, the students showed synergy. Hearing Geeta reciting the syllables, you get an estimation of the force behind them. Again, the students shone in connecting their spine to the body. 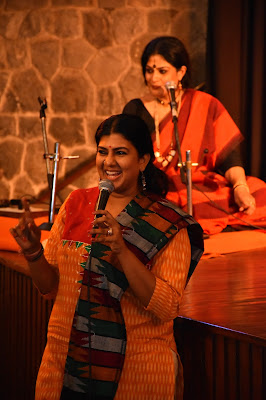 The interlude had Dr Swarnamalya Ganesh narrating her own experiences. “It is a blessing to be taught by a guru who sings. We take back a lot from senior gurus and the way they teach, the voice, the command, the motivation and their musicality. A dancer and a singer as a teacher is a rarity and a great blessing. I started training at the age of three under Guru K.J. Sarasa. She did not speak English but she could communicate through humour. If you did something wrong, she would not yell or throw the stick at you, but she would ridicule you. It was the best lesson when you had the whole class laughing at you. Nobody would ever make the mistake again. I try the same in my class. Earlier, you could not see the nuanced process like this. Sarasamma would not hold a public session such as this. I cannot reconstruct the past without looking at the pedagogy of these times. So if you see the adavus, the araimandi was slightly apart, leading to the squaring of the body rather than the triangulation that is more prevalent. It is more like the chauka of Odissi or like Mohiniattam, with the knees and hands squared. So the entire vocabulary has changed, except that you have to be firm and centred. The pedagogy and training is always there. Dance affects all that you do in life, even how you make dosas. The guru-shishya parampara still prevails in dance, since the class is still guru-centric. It could not be the same without her poise and talam.” 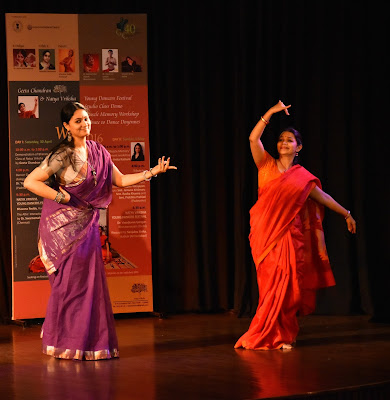 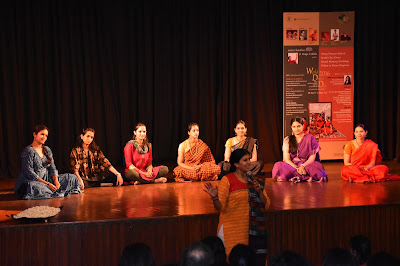 Geeta’s senior disciples began their session by singing a Saraswati vandana. Theirs was to be an abhinaya session that began with expressing the beauty of the lotus eyes of Krishna, which each dancer presented through a different gesture. Geeta said that abhinaya was taught to her by Kalanidhi Narayanan mami. The depiction she did was a piece for a khandita nayika. The nayika tells Krishna that he has not ventured into the right house – ‘this is not that other woman’s house’. The literature had a lot of scope for abhinaya. ‘Yato hasta tato drishti’ did not apply here, since you could be gesturing and still looking elsewhere. The abhinaya is steeped in culture, the mannerism changes as society changes. There has to be exaggeration, but not an excess of it, said Geeta. She said that Kalanidhi mami taught her that you have to first work on the nuances of abhinaya, and later at the foot movements.

Guru gun (praise of the guru) 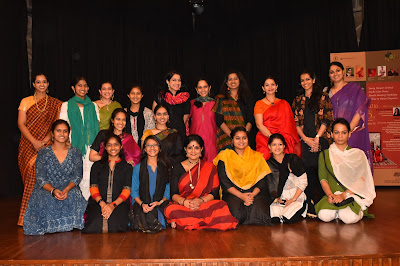 ‘Sab dharti kagaz karoon, lekhni karoon vanrai, sab samudra ki masi karoon, guru gun likhyo na jaye’ (I could make paper out of all the earth, pens out of all the trees, ink out of all the oceans, and still not be able to describe my guru). Echoing that sentiment, Geeta’s disciple Meenakshi, daughter of Dr. Krishna Menon, spoke about her guru next. She compared Natya Vriksha to a tree with a canopy, bearing tangible and intangible fruits, having deep roots, offering solace. She said that clumsy bodies are made to feel their spines and faces made to emote. “My guru, Geeta Chandran, is a warm, nurturing, profound and wise person,” she finished.