On the 15th of January, Delhi was reeling under a very cold spell and the chill was a big dampener. But Gauri Diwaker’s Kathak solo, with its tremendous energy and warmth, lifted the spirits and injected some much-needed warmth into the evening with its theme. It was performed at the Shri Ram Centre in Delhi. 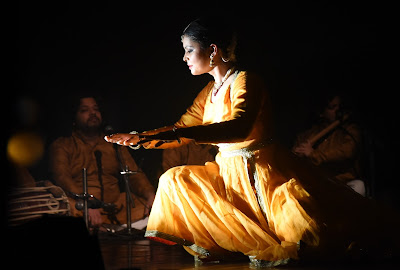 Gauri has been rated one of India’s best young talents. She has trained under Ms Sumita Chaudhary, Pt Birju Maharaj and Shri Jai Kishan Maharaj at the Kathak Kendra. She has perfected her skills under Aditi Mangaldas. She is a dancer who has the energy of youth and the maturity of a seasoned dancer. 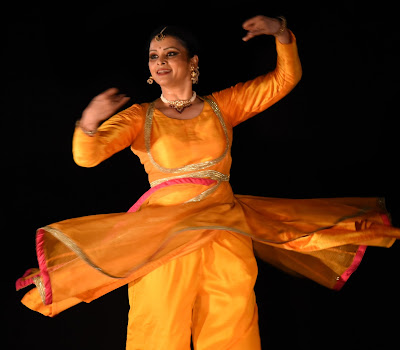 The performance was titled Hari Ho… Gati Meri (Hari, you are my destination), and it was based on Krishna poetry by Muslim poets. Even the invite for the performance was a work of art - the cutout of a tree in silver on an orange foreground. The art form used is Sanjhi, which originated as decorative patterns for enticing Lord Krishna. It was made of cow dung on village walls by unmarried women. It became temple art by the 19th century. This particular piece, titled ‘The tree of life’, has been handcrafted by Mr. Vijay Kumar Verma from Mathura, UP. Talking about it, Gauri said, “When I told him that my theme was Radha and Krishna, he showed me this cutwork, which totally matched the theme of my second piece. And since Sanjhi is from Mathura, the birthplace of Krishna, it’s closer to the concept.” She elaborated on the concept, telling me, “Sanjay Nandan had curated the poetry for it. But it’s not possible to make all poetry lyrical and dance to it. So out of his research, I selected ten to fifteen of them and finally, it was Aditi Didi’s (Mangaldas, the choreographer of the production) call which ones she wanted to choreograph.” 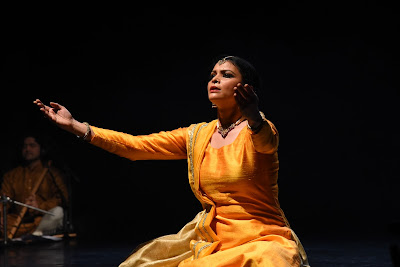 Sanjay Nandan, who curated the poetry for the performance, is a journalist by profession, and reading Hindi poetry is his interest. About the title, he said, “The inspiration for it came from a poem by Bilgrami - Hari Ho, Hari Ho, Gati Meri. The title is a statement of the quest to submerge in the Supreme. It is the way to salvation. The concept was initiated after reading an article by CM Naim, a professor in the University of Columbia. He has written about Hasrat Mohani, who was a part of our Constitutional Assembly and initiated the slogan ‘Inqelab Zindabad’. So I thought, let’s go beyond Raskhan and read about other Muslim poets who have written on the theme of Krishna. And I came across many more. Even when Sufism was not very well-established in India, Muslim poets were writing about Krishna and Hinduism. All the poetry that I have explored and collected is by Muslim poets.” 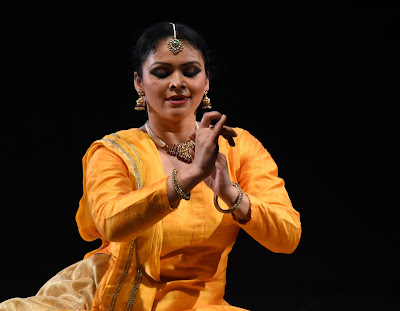 The entire presentation was in four parts. The first part was ‘Resonance’, based on poetry by Maulana Hazrat Mohani – ‘Irfan-e-ishq naam hai mere maqaam ka, haamil hoon kiske nagma-e-naya payaam ka, duniya-e-jaan mein shor hai jiske dawaam ka’ (my destination is where there is recognition of my eternal love, I am the messenger of Him whose songs are laden with knowledge. Is the melody emerging out of Krishna’s flute beckoning to eternal life or the fount of ever-increasing knowledge?). In this piece, the poet is talking about Krishna, who is within us and whose flute is beckoning us to the eternal truth. For this piece, Gauri wore a golden-yellow kurta which was strongly reminiscent of Krishna’s peetamber. Here, she used paran, a few tukde and gat with shifting feet to depict the hearing of the flute and the effect it has on you. She finished the piece by reciting the poetry – Irfane-e-ishq naam hai mere maqaam ka. The flute or the bansuri played by Kiran Kumar was so melodious that it really created the true feel of the piece. This was followed by an interlude of tabla by Yogesh Gangani. The speed of his percussion and the play of the beats was mesmerizing. 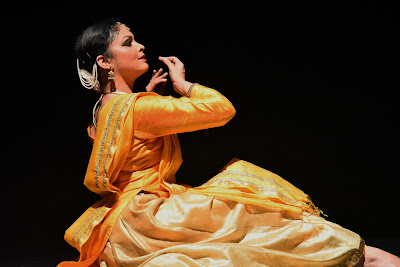 The next section, titled ‘Shadows of Each Other’, was based on poetry by Mullick Mohammed Jayasi. The lyrics are – ‘Mohe Tohe Rahi Anter Nahi’ – where Krishna is telling Radha that they are not two.  They are like shadows of each other. Krishna says that he is immersed in Radha like a drop of water in the ocean. Here, the costume change had yellow bagalbandi, like Krishna’s costume. Again, Gauri used tihai, footwork, paran and chakkars to depict the piece. As the words say, Krishna and Radha are two but one in soul, like a body and its shadow (‘pind parchhai’). Gauri depicted it by alternating the faces of her hands. The abhinaya then went on to show the ornamentation of both Krishna and Radha – morpakha and the beni, kundal-patka and the bindi-ghoonghat. Next, it was a jugalbandi of footwork and pakhawaj, again reflecting the oneness in the two. Ashish Gangani on the pakhawaj was an excellent accompanist to Gauri’s technique. Here again, we saw the DNA of the Ganganis at work in the next generation. ‘Aapahi boond manahun samudra samaana’ (as if I have become a drop and become one with the ocean) – here, the echo from the percussion made an excellent impact to show the drop falling. Gauri finished this piece with a stance while rotating and lifting both hands above her head, intertwining her arms and raising two fingers, giving the message of ek praan do dehi (one soul, two bodies), or the tree of life, followed by quick chakkars. 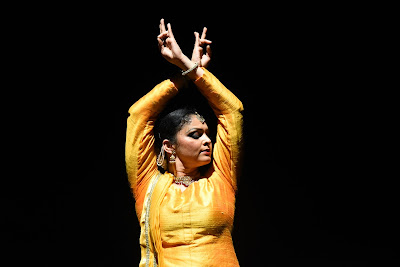 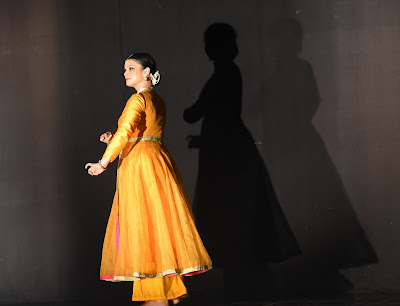 The third section, titled ‘One’, denotes the union of Radha and Krishna. They are both diverse - one blue, the other gold, one dynamic, the other graceful. ‘You-me, me-you, you Krishna, me Radha. Me Radha, you Krishna. Pahichaan aapani khoyi, Rayi Kanha bhaye ek sanga, laag chandan hoi ek anga' (Individual identities lost, Radha and Krishna are one, and having applied chandan, are of one colour)’. Again, Gauri’s technique was perfect and the abhinaya was emotive. The interlude had hearts racing with Ashish Gangani on the pakhawaj and Mohit Gangani on the padhant. In this piece, lighting was used to create shadows in the background, sometimes many and sometimes just one huge one. 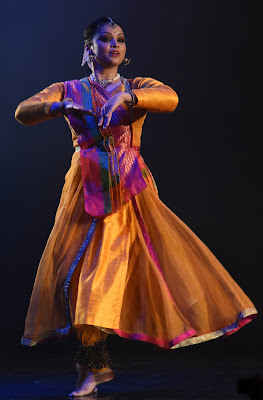 The climactic piece, ‘Hari Ho Gati Meri’, addressed the Almighty – ‘You reside within me while I search for you without. I hear the flute, I see the melody, I feel the love’. The poetry was mostly in kavit form and the nritta had padhant, paran, gat, parmelu and footwork with the vibrating of the feet to make the ghungroos rattle. ‘Din ko pranaam kiye raati chali jaati hai’ - this was a composition by Syed Mubarak Ali Bilgrami. ‘Sunder sujaan par lagan lagi rahe’ - this was a composition by Mian Wahid Ali. The poetry and the choreography of the piece were reflecting the pining and the quest of the devotee for his Almighty. ‘Hari ho gati meri’ - interpret it the way you want to. 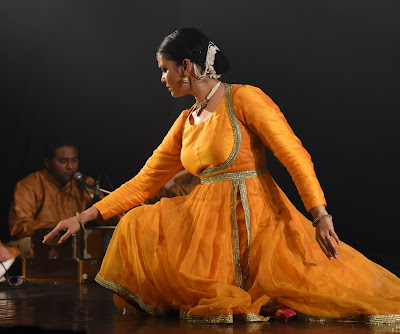 Gauri explained the technical aspects of the dance, saying, “The first piece was in Urdu. When we think of Muslim poets, we think it’ll all be in Urdu, which is not correct. But Resonance was all Urdu, though it had no predictable bhava. We used the bansuri ki dhun, its goonj… The second was in braj bhasha, khadi boli – ‘tohe mohe rahi, antar nahi’. The gist of it was that Krishna and Radha are not separate. The third was more predictable – jaise bol waise bhava (the bhava were like the bol). Jugalbandi was used smartly to depict Radha aur Krishna as two, but one. The light was used because of the reference to parchhai or shadow. It was a totally technical piece. Radha and Krishna are One, and so One was the name of the piece. Mubarak sahib ki likhi hui thi, but unko raag mein nahin daala (the poem was by Mubarak sahib, but we did not set it to raag) – didi said we should keep it kavit, or like a recitation. Generally in Kathak, we start in vilambit, then madhya, then dhrut taal. But for this piece, we started with dhrut, went into vilambit and then into madhya. That, aamad, paran – they all were there, they’d been tied into it.” When asked about a stance she took often in the piece, like two mor pankhs crossed, she explained, “That stance is about Krishna and Radha again, that they are one.” 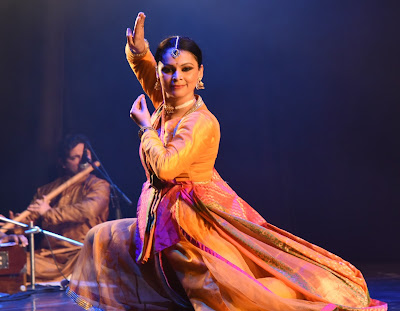