On the occasion of the birth centenary celebrations of His Holiness Swami Chinmayananda, the Chinmaya Jyoti Utsav was held at the Vivekananda Mela Grounds in CR Park in Delhi on the 3rd of November. On this occasion, a vahini (bus) carrying the padukas, vastram and jyoti travelled across different states. In Delhi, it was received at Chinmaya Ranjan by Swamini Gurupriyananda and Swami Durgeshananda. That evening, a grand stage in the grounds was decorated with banana tree trunks. The trunk is cut into shape and made into panels for the style used in Vrindavana. On the pedestal that seated the padukas, Lord RadhaVallabhji presided.

OS Arun started things off with a guruvandana. Then, the puja of Swamiji’s paduka commenced. One hundred and eight flowers were offered by Swami Gurupriyananda and Swami Durgeshananda amidst the chanting of shlokas. The act of each flower being touched to the heart and then offered to the padukas evoked great reverence and satvik bhava. It was a scene from out of this world. The video showing the arrival of the vahini and Swamiji alighting from it, his feet and padukas visible in a symbolic way, left the audience in great reverence. I could feel the goosebumps.


Children from three schools chanted the 15th chapter of the Bhagwat Geeta. At a time when the older generation is crying hoarse that the next generation is not being introduced to our culture, here were children reciting the Geeta with great ease.


Amongst the speakers, Swami Nikhilananda spoke about the message of the Bhagwat Geeta, emphasizing on sewa (service), love, wisdom and dhyana (meditation). A few disciples spoke about Swamiji’s influence on their lives, and finally, it was Swami Mitrananda who spoke about his encounters with Swami Chinmayananda and his disciples. Very touching were his words - “It’s very lonely up there”.

Rajiv and Geeta Chandran conceived the entire cultural programme. The sankeertan group of gaudiya sampraday vaishnavs chanted the mahamantra with mridangam and manjira. Their dance with percussion created spiritual fervour.

The dancers of Tanya Laskar’s group presented Rabindra Natyam based on Rabindra Sangeet. The performance was homage to both Rabindranath Tagore and Swamiji. The composition ‘Bishwa bina robe’ is based on the Shankho school of thought and describes srishti, sthiti and vinaash. The lilting music and dance were impressive. The painted faces of the dancers and their painted dupattas were very artistic, and perfectly represented Bengali culture. The maharaas as described in the Bhagvat Purana says that it is only when ‘jeev’ or the human surrenders his pride at the feet of the lord does union take place, and then there is the dance of the atma and the parmatma. Befittingly, the evening culminated with the presentation of maharaas in different styles of dance. It was the month of Karthik and an open air stage to dance on in the sacred presence of Thakurji and Swamiji’s padukas - just the right ambience to perform the maharaas. 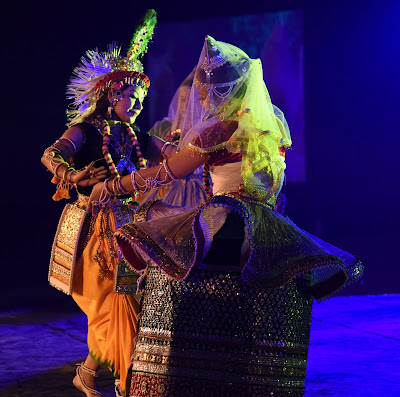 Dhanarani Devi and her group performed in the Manipuri style. Radha and Krishna meet in the nikunj on a vasant purnima. They dance together, play Holi with colours and pichkaris and finally, the arti is done by the sakhis. The dancers were very graceful, with good footwork.


Geeta Chandran and her Natya Vriksha Dance Company performed raas in Bharatnatyam. The dance was based on Rasikvani by Hitaharivanshji – ‘Khelat raas rasik braj mandal’. The composition describes how Krishna, Radha and the gopis dance in the full moon night. They are so engrossed in dance that they intertwine like shyam and kanchan beli (black and gold coloured creepers). The two are lost to the world (maganaman) while dancing. The costumes were very well designed. The abhinaya by Geeta was very expressive and the nritta and formations by the group were immaculate. 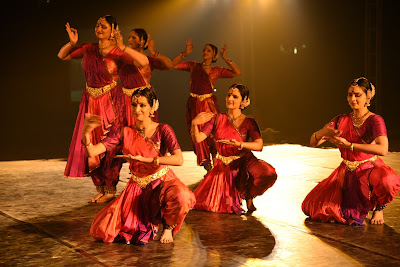 The last formation, where Krishna plays the flute while the cows and sakhis look on, was very impressive. Talking about the choreography, Geeta said, “An open-air environment requires a different kind of work, so we had to redo quite a bit of it. And since we have been associated with the mission for so long, the jyoti coming was an added excitement. Each time I turned, I could see Thakurji there and this was a unique experience. We have two new dancers in the group, so it is always a work in progress - re-visualising and re-choreographing with newer challenges.”

While the previous performance became beautiful for its use of expressions and formations and movements up and down the stage, the next group - Asavari - led by Shovana Narayan was impressive for its speed and tempo. The group danced to the first few lines of Nandakumarashtakam, depicting the lifting of Giriraj by Krishna on his little finger. Shovana Narayan performed abhinaya to ‘Baso mere nainan mein Nand Lal’ - a Meera bhajan. The group finished on a few lines from a sufi qawwali – ‘Tere ishq nachaya karke thaiya thaiya’ (I dance to the tune of your love), with spins by the group at great speed. 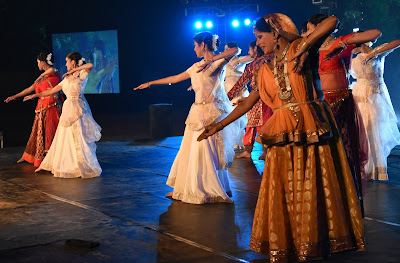