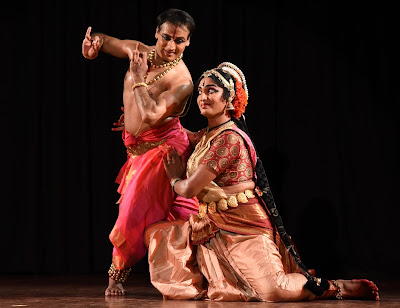 Jugalbandi is also about the rapport between the two dance styles and the two dancers. Abhinaya in Bharatanatyam is subtle, whereas in Kuchipudi, it is dramatic. The two differ in some technicalities as well. That evening, the dancers presented Bhama Kalapam. It is a Telugu dance drama from Andhra which expresses the pinings of Satyabbhama, wife of Krishna, for her beloved. The role of Krishna was essayed by Sathya in Bharatanatyam, and that of Satyabhama by Ajay in Kuchipudi. It is said that men are from Mars and women from Venus. But in this performance, the man travelled all the way to Venus and stayed there. Ajay’s aharyam, jewellery, makeup, gait, mannerisms, expressions and nuances were every bit that of a woman. If you didn’t know that it was a man performing, you’d never know it. Especially the nose ring between the nostrils (besar) gave a very feminine touch to his expressions. 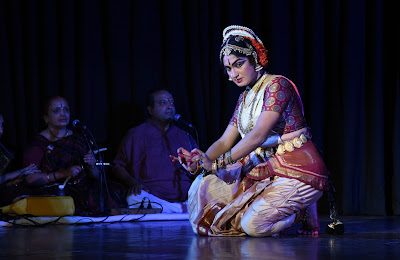 Pravesa Daruvu of Bhama Kalapam is a self-introductory piece by Satyabhama herself. ‘Bhamane, Satyabhamane’ was executed by Ajay with a lot of attitude and flair, where she introduces herself as the daughter of King Strajit and the most beautiful and desirable wife of Lord Krishna. The next piece performed by Ajay was Lekham, where Satyabhama writes a letter to Krishna. Hearing a flute, she is struck by pangs of separation from him. He is the nandanandan, venudhari, with feet like lotuses. Kamadeva is aiming his kusumvana (flower arrows) at her and her misery is being enhanced by the cooing of the birds. She asks Madhavi to deliver the letter to Krishna. Ajay’s footwork and expressions in this piece were impressive. 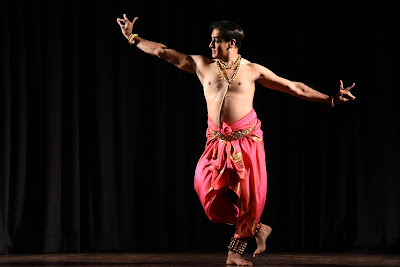 Sathya enacting the role of Lord Krishna, entered with a pravesa daruvu (Rajeevaakshudu Rajagopaludu) in the reethi gowla, tala malika. Sathya in a red dhoti looked stunning and his exactitude of footwork and hastas is always appreciable. Lord Krishna wears the kasturi tilakam – ‘neela megha shyam’ – the blue of the clouds, and his looks shame millions of Kamadevas. In abhinaya, Sathya related the story of lifting the Govardhan by Krishna on his little finger to save the lives of animals and gopis from the fury of Indra. Krishna steals the clothes of gopis while they are bathing and asks them to beg for them with their hands raised. The abhinaya for this particular portion, enacting both the shy gopis and arm-twisting by the Lord, were done with a lot of expressions. 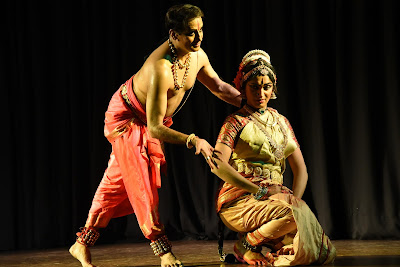 What followed was a samvada or conversation between the two lovers. Bhama does not receive any reply to her letter, and she is annoyed and upset. As she removes her ornaments, she accuses him of being with the cows, the Kaliya naag and with his other wives too. When Krishna finally appears, the annoyed Bhama runs into the interiors of her apartments and covers her face with her sari. When Krishna comes, she looks at him through the corners of her eyes. This particular stance by Ajay was done in an immensely feminine manner - when the female is expecting the hero to come to her, but is too annoyed to look at him. And as Satyabhama accuses Krishna of being with other women with pangs of jealousy, Sathya as Krishna, stands in the background, as if enacting her thoughts out. But this quarrel ends with the philosophy of advaita, where Satyabhama is the jeevatma for her parmatma, Lord Krishna. 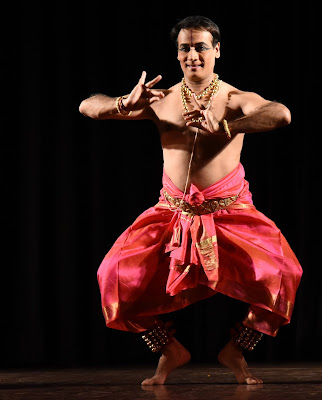 The performance ended with a thillana, a nritta piece with the two dancers, which had eye movements, agility and Sathya’s leaps. The thillana was in Raag Vrindavani, a composition of Dr Balamuralikrishna. Ajay’s mother, Sathyawati, is the artiste behind his looks.

When asked about performing in Delhi, Sathya was ambivalent. “I always enjoy performing in Delhi, but we don’t get that kind of response. The auditoriums are never full.” About the dancer playing the female being taller than him, he said, “In the texts, it is written that Satyabhama was a tall maid and Krishna was short, and that’s how we were today.” The organiser, Usha, mentioned that the entire performance was rehearsed only for a day.

On the second day, the jugalbandi and samvad was a very interesting one. All the time, you hear of compositions about how Hari and Hara – Vishnu and Shiva – complement and worship each other. There is always a comparison, but a complementary one. But here, Parvati and Lakshmi, the consorts of Vishnu and Shiva, give a twist to this vying. The roles of Parvati and Lakshmi were essayed by Arupa Lahiri in Bharatanatyam and T Reddy Lakshmi in Kuchipudi, respectively. Arupa is the shishya of Smt Chitra Visveswaran. She is among the next generation of Bharatanatyam dancers. T Reddy Lakshmi is a disciple of Gurus Jayarama and Vanashree Rao. 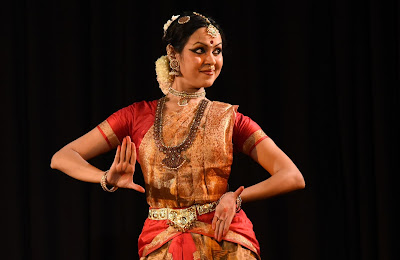 The performance began with a pushpanjali. This was followed by a kautuvam composed in khanda nadai by Arupa Lahiri and Dr Vasudevan Iyengar. Arupa as Parvati explored a traditional padam – an unmarried Parvati dreams of her lord. She sees Shiva walking in a procession with matted hair, with the Ganga and the half moon on his head – but she also reminisces about the story of her previous incarnation as Sati, and how she had immolated herself in the yagya of King Daksh. Then she goes on to describe to her sakhis how she has been waiting for him all these years, wondering if he will accept her now. Arupa was very graceful with the abhinaya in this piece. 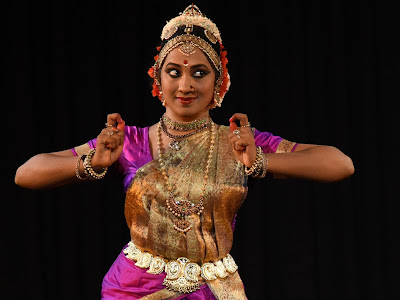 Lakshmi performed a Thyagaraja krithi, describing the swayamvar of Ram and Sita. Raja Janak watches as his little daughter lifts the Shiv Dhanush. Lakshmi depicted Sita tying the toran, making a rangoli - ‘dharani sukumari janakarajanandini tribhuvan sundari’. Little Sita is playing with a ball which falls behind Shiva’s bow. Sita moves the bow with ease and picks her ball up. A stunned Raja Janak pledges that he will marry his daughter only to someone who can break the Shiv Dhanush. He is surprised and in awe. The kings fail to lift the Shiv Dhanush when they come for the swayamvar. And then Lakshmi enacted ‘Shri Raghav Raghukul Ratnadeep’ Rama, lifting the bow and breaking it. Rama-Sita kalyanam was enacted – the knot is tied and the bride and the groom circumvent the havankund. This particular piece was enacted immaculately by Lakshmi, doing the abhinaya for all the characters involved. 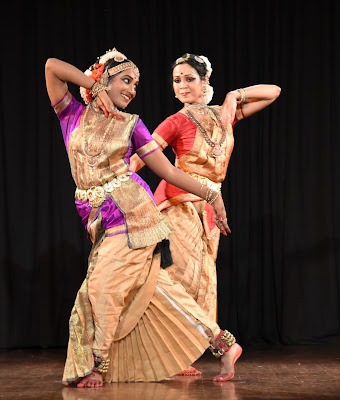 The argument is humourous and draws to a close when Lakshmi and Parvati both realise that Hari and Hara are the same. The composition required a lot of postures and handwork. Arupa and Lakshmi did justice to the piece. Their abhinaya and postures and jestful expressions were immaculate. The final thillana in Revathi raga was a composition of Maharaja Puram Santhanam. It praises the devi as matangi, mahishasurmadini, mookambika, parashakti. The agility of the two young dancers was evident.