An utsav of dance

Ranjana Gauhar is a leading exponent of Odissi trained under the legendary Guru Mayadhar Rout and Ms Aloka Panikar. She was awarded the prestigious Padma Shri in 2003. Utsav, her dance academy, presented its annual two day festival of Indian dance, Sare Jahan Se Accha, on the 25th and 26th of August 2015 at the IHC in Delhi. 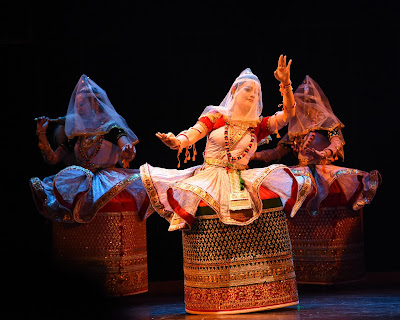 The first performance on the second day started with a Manipuri dance by the artists of Jawahar Lal Nehru Manipuri Dance Academy or JNMDA from Imphal. The production unit of the academy has a rich repertoire of traditional and contemporary works. For the evening, they presented the Vasant Raas. The composition is one by Maharaj Bhagyachandra, king of Manipur, in the 18th century. The raas is performed on a full-moon night of Chaitra maas(the month ‘chaitra’ of the hindi calender). In the yearning of gopis, the agonies of the human soul for union with the supreme soul are implied. 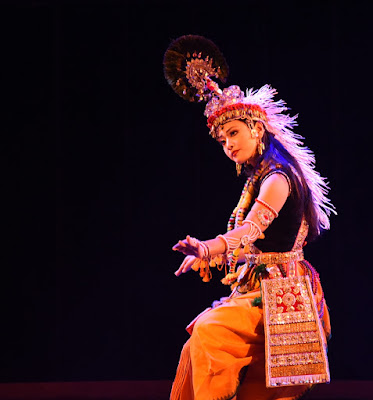 The Manipuri form of dance has a lot of wavy and graceful movements, with soft leaping movements of the feet. The costumes are also quite beautiful. The group, in their depiction, portrayed Krishna playing the flute and Radha approaching, accompanied and served by her sakhis in Vrindavan. When they meet to unite in the beautiful surroundings of a full moon night, with a gentle breeze blowing, they dance and play with colours and pichkaris. Krishna gets miffed so Radha wipes his face to appease him, and then there’s the culmination in a scenic aarti by the sakhis. The entire piece was executed aesthetically by Y. Nerina Devi, G. Chandan Devi, Th. Parul Devi, L. Sunita Devi, O. Debala Devi and Th. Ibemubi Devi.


Pratibha Prahlad performed a solo next. Pratibha is among the best-known dancers in India. She has been trained under Guru VS Muthuswamy Pillai, Guru Smt Kalanidhi Narayanan, Smt Prof US Krishna Rao and Dr Vempati Chinnasatyam. She has been honoured by the Sangeet Natak Akademi. The performance was a collage of three pieces. The primordial sound of the conch of Krishna pleases the entire universe. The birth of Krishna and his play with his mother Yashoda was enacted in raag Mallika, taal mallika. The first piece started with a shlokam, Sri Krishna sharanam namah. All of creation – birds, flowers, peacocks, butterflies, cows – all stand amazed to listen to the sound of the conch of Krishna. The life and birth of Krishna was depicted from his birth in the prison in Mathura. Devaki is astounded by the four-armed incarnation of the Lord, and pleads with him to come to her as a baby. The nritya and abhinaya for the piece were immaculate. The accompanying artistes were - on nattuvangam: Tanjavur R Kesavan, vocals: Sudha Raghuraman, mridangam: M.V. Chandrashekhar and flute: G Raghuraman.
In Vrindavan, Krishna is shown to be playing the flute, wearing the morpankha (peacock feather). He is the cowherd holding up the Giriraj on his little finger, and dancing on the hood of Kalia the serpent. The next piece, Krishna Ni Begane Baro, has been visited by many dancers, and they all give their own interpretative spin to it. Pratibha showed Krishna being bathed by his mother. She  ties his pitambar on his waist, applies chandan on him. Krishna is depicted stealing butter, when his mother chides him into opening his mouth, she sees the entire universe in it. The abhinaya was done excellently for both Krishna and Yashoda. Yashoda begs him to take away that scary vision, and Krishna hugs her lovingly. Pratibha ended the piece with a bhajan.

Smt Smita Shastri is a renowned Kuchipudi and Bharatnatyam exponent. She established the Nartan school of classical dances in 1971. She has won many awards. Her disciples performed a padam, a Mira bhajan, set to ragam Vrindavan Sarang in aditalam. The dancers as gopis wade through the water in the river when they hear the flute of Krishna – they flee to meet him. In the composition, the episodes depicted were jhula (playing on swings in the saavan), raas and Holi. The dancers did energetic nritta with leg lifts. In the Bala Gopal Tarangam in ragam Mohanam, talam Mishra chapu and mallika, the poetry had episodes from Krishna Leela Tarangini, written by the famous saint-poet, Tirtha Narayan Yati. 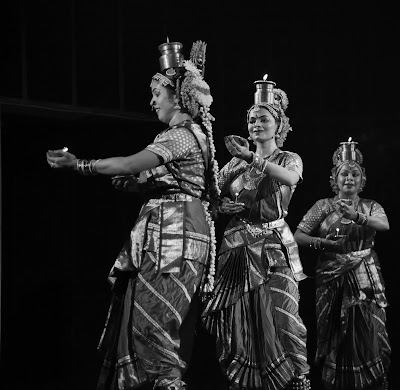 The dancers danced on the rims of brass plates, balancing water-filled pots on their heads with diyas lit on it. Finally, they also held diyas in both their hands. The dancers were Jalpa Joshi, Khyati Vyas, Mahek Khambhata, Bansuri Pandya, Kushani Shah and Het Kapadnekar. Though the rhythm for the piece was fine, the diyas started to get extinguished in the middle of the piece, ruining the beauty of the choreography. The spacing between the dancers could have been better managed.

The next performance was by the disciples of Shama Bhate. For the last 35 years, she has been working as a performer, teacher, choreographer and artistic director. She has performed in both India and abroad, and received the Maharashtra Rajya Puraskar 2011. She also runs the Nad-Roop School of Kathak. 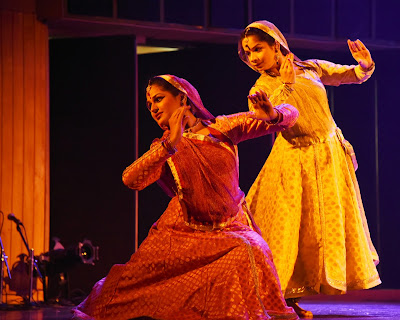 The performance portrayed the leelas of Krishna – the Yug Purush, Sankat Mochan and Palanhaar. He is the Jagadguru. The performance began with the shlokam ‘Vasudevsutam devam’. The first leela portrayed is that of Kaliyadaman. The Yamuna and its surroundings were full of life, but as the serpent king inhabits the Yamuna, nature starts wilting. But as Krishna vanquishes the Kaliya Naag, nature comes alive again. In the next episode, the gopis leave for Mathura to sell their butter. Krishna stopped that practice by barring the gopis from leaving and broke their pots full of butter with a stick. And finally, the Kansavadha. Krishna is taken to Mathura by Akroor on a rath. Krishna fights and kills the elephant Kuvalaypeed and finally destroys the demon king Kansa. 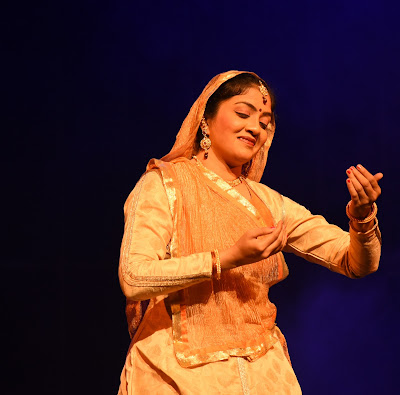 “The concept had great relevance in today’s times – the buttermilk was exported and the locals were deprived, whereas in the Kaliyadaman leela, we see the tyranny of the serpent king. We are always looking for a saviour who is from amongst us,” said Bhate. 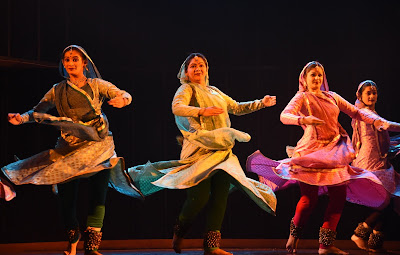 The music was composed by Kedar Pandit, and the narration was by Sachin Khedekar. The music was creatively composed - at times, it even featured the piano. The dresses in simple pastels, the lighting and the well-rehearsed dance made for an immaculate performance, even though the concept was an oft visited one. The dancers - Ameera Patankar, Vidula Pharate, Avani Gadre, Ragini Nagar, Savani Mohite, Shivani Karmarkar and Ketaki Sathe - showed technique, agility, energy and abhinaya. The abhinaya, interspersed with storytelling, was well-executed. The flow and tempo of the performance did not slacken at any point.