A spectacular tribute to the nation

It was a mega event, with something of the pomp and show of a place like The Kingdom of Dreams in North India. There was a galaxy of sponsors and guests, and a huge stage with cutouts of freedom fighters and many dancers, thumping music, great lighting effects, patriotic songs and a variety of tricolor costumes. It was an event with a patriotic theme, where dances with contemporary sensibilities were enjoyed by all alike.


Jashn-e-Azadi was celebrated on the 9th of August at the Weight Lifting Auditorium of the Jawaharlal Nehru Stadium, by the Nehru Bal Sangh. It was about 50 years ago that a group of six students started the Nehru Bal Sangh with the blessings of the then PM, Shri Lal Bahadur Shastri. It is now operating in 18 states of the country and has till date organized 29 national-level integration camps in various cities across the country. 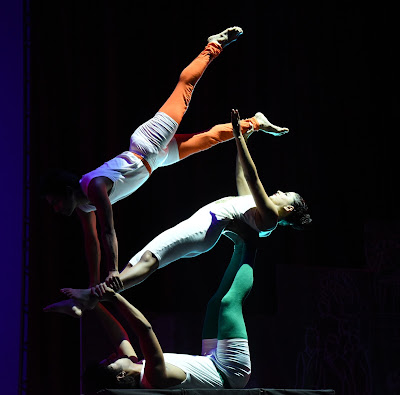 Sadhya, a unit of performing arts, is one of the leading dance companies of India, formed by Santosh Nair, who is the artistic director of the company. It has provided a platform to upcoming talents and promotes the passion for dance in the young. Nair began his journey as a dancer under his father Shri Kalamandalam Padmanabhan in the year 1986. He was further trained by Shri Sadanam Balakrishnan and learnt modern dance with Shri Narendra Sharma of Bhumika Creative Dance Centre. He has also learnt the traditional dance of Orissa, Mayurbhanj Chhau, under Guru Janmejoy Saibabu. 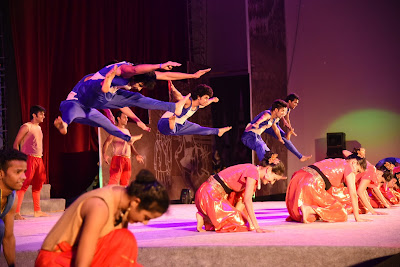 The emcees, Sahil Bajaj and Naina, were quite entertaining. The stage was of a grand size, with huge portraits and cutouts of freedom fighters, and scenes from the protests of the freedom struggle. The lighting was appropriately done, the costumes were comprised mostly of the tricolour or were otherwise quite colourful. At times, the dancers wore swirling white skirts. The tale of the freedom struggle was well-researched and narrated in a multimedia presentation, which had many original clippings and videos. This added to the interest value. The music was catchy, the dance sequences were well-rehearsed and choreographed, and together with all this, the use of colourful props made the event a success. 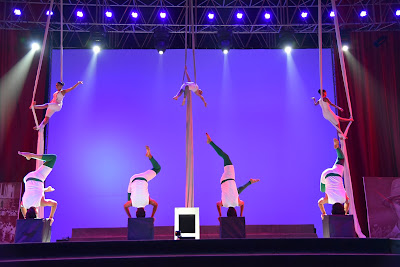 The show started with Vande Mataram in its slow, lilting tune, to which dancers did gymnastics - headstands, leg splits, lifts and formations, three-tier lifts on tables and stools. The main attraction of this piece was three gymnasts on the aerial silk hung from the ceiling. The dancers wore white costumes spangled with silver. 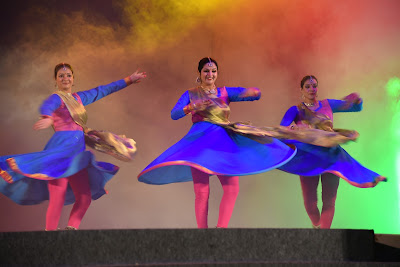 The next song, Jai Jai Mataram, a fast-paced composition, was danced in Kathak. A few dancers held colourful umbrellas while contemporary dancers in yellow and orange skirts, danced in the foreground. A few dancers held poles with yellow flags hung on both sides, rotating them. It became a colourful medley of dancers and flags. 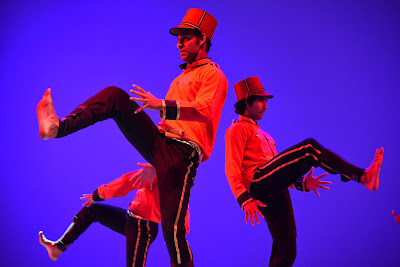 The narration began with the East India Company (1757-1858) taking over the reigns of India after the battles in Plassey and Buxar. The dancers enacting the soldiers carried the British flag, whereas the downtrodden Indians were shown struggling, ‘bound’ by long elastic cloth bands. 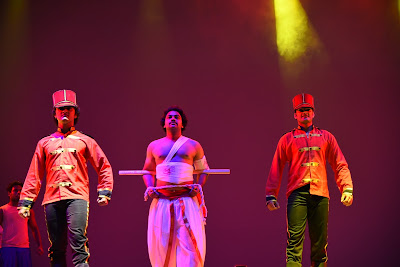 The first revolt is said to have started in Meerut by Mangal Pandey in 1857. The song used was that from the Aamir Khan starrer Mangal Pandey - ‘Mangal Mangal’ - to which contemporary Chhau was danced. ‘Bhaag bhaag re firangi’ - ‘run away you foreigner’. 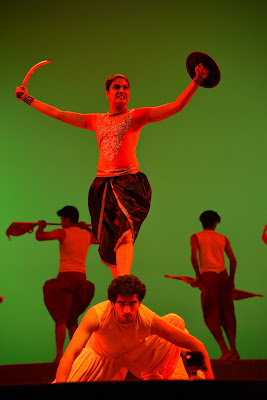 The war with Rani ki Jhansi was portrayed with powerful dancing by the lead female dancer. The dancers did formations with red flags. 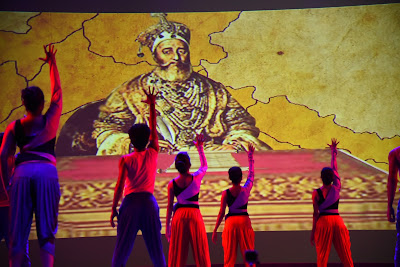 The next historical event portrayed was that of Bahadur Shah Zafar being taken captive, and the rule of the British Queen being established in India. The Jallianwala Bagh episode, which took place on April 13, 1919, was enacted as well - the firing orders given by General Dyer. It left 1000 dead and 2500 injured. The episode was enacted well. 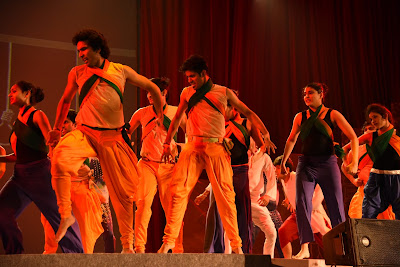 The train from Kakori was robbed by the Indian mutineers on August 9, 1925. Other freedom fighters - Chandrashekhar Azad, Bhagat Singh, etc - were also portrayed. The incident of the bombing of the legislative assembly was shown through videos. These sequences were enacted on the stage and also off the stage in the aisles and the spaces in the auditorium. ‘Sarfaroshi ki tamanna’, ‘Mera rang de basanti chola’, ‘Ae watan ae watan’ - all these film songs stirred the patriotic emotions. The hanging of Bhagat Singh by the Britishers was also enacted the same way - suddenly you would turn in your seat and find the dancers walking past you.

The next chapter in the history shown was the formation of the Congress party and the popularity of Lal, Bal, Pal (Lala Lajpat Rai, Bal Gangadhar Tilak and Bipin Chandra Pal) and Khan Abdul Ghaffar Khan or Frontier Gandhi. The song ‘Kuch kar guzarne ko’ from Rang De Basanti was shown very artistically using a piece of red cloth as blood, which was being waved and passed on between the dancers. 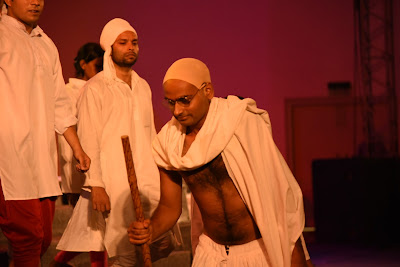 The next chapter from history picked up was that of Mahatama Gandhi. Briefly, the events enacted were - the satyagraha in Champaran, ahimsa and asahyog aandolan in 1920, the call for purna swadheenta in 1929, Dandi march from Ahmedabad to Dandi, Bharat Chhodo Andolan in 1942, the call for karo ya maro (do or die), Subhash Chandra Bose forming the Azad Hind Fauj and finally, the gaining of freedom on the 15th of August, 1947; Partition , the assassination of Bapu by Godse and Nehru and Patel taking the country ahead. The songs for this section were ‘Nirbal se ladai balwan ki’, for which there was a long march around the auditorium , ‘Junoon hai Satyamev jayate’ in contemporary style and ‘Bharat humko jaan se pyara hai’ with dancers holding diyas.

And then, as a grand finale, tricolour cloths were wrapped around the waists of the dancers and spread out at the other end, bikers with flags, twirling dancers with tricolour skirts, boys jumping and doing cartwheels. Santosh Nair seems to have perfected the art of creating events of this magnitude. Sanjay Chauhan of Paan Singh Tomar fame, who was one of the guests, summed up spectators’ sentiments when he said that Sadhya performed something in a few hours that would have taken at least five days in Bollywood. Even though I personally felt that a little more original/classical music, and fewer Bollywood songs, might have made it even better, I certainly agreed with him.