Kuchipudi exponent Vanashree Rao started her training under Guru Krishna Kumar and later under Shri Jayarama Rao. She then underwent training under Guru Vempati Chinna Satyam and Dr Nataraja. She has been awarded the SNA Award and Sahitya Kala Parishad Samman. Vanashree runs the Kuchipudi Dance Academy with her husband Shri Jayarama Rao. On July 30th, she performs a solo called ‘Prarthana’ in Delhi. Doing solo abhinaya pieces has been her forte and she says it has always been received well by her audience. Here, she explains the concept behind this production ahead of her performance. 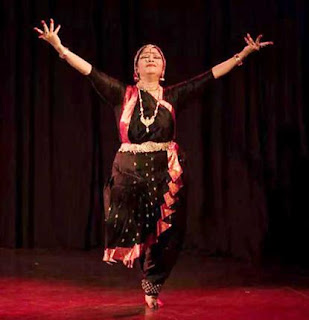 Vanashree: “I wanted to do something spiritual related to our religious texts. And I wanted a strong storyline that is known to all. The difficult part here is that when I am doing the male role, people should not think that a female is doing a male role. In Kuchipudi, we believe in ‘natyadharmi’ tradition - that is, during abhinaya, the same person plays different roles regardless of the gender. When the aatma is totally relating to the story, then through abhinaya, we can convey a male or female role comfortably. Last year, my choreography was received well, so this time, I thought I would do something different. The performance is a prayer to Shiva and Vishnu, who are two sides of the same coin according to Indian philosophy and mythology. I started with the origin of Vishnu Sahastra Naam. In Mahabharata, when Bhishma Pitamah was lying on his death bed, Yudhishtir comes up to him and asks him how salvation can be attained, since they were living a life of violence. Bhishmadev says that it is only through Vishnu Sahstra Naam that salvation can be attained. Starting from that premise, I’m going on to Yudhishtir chanting the Vishnu Sahastra Naam.

Of course, you can’t do all 100 on stage, but even while doing one or two, there is a shloka that says he is the one who destroys the ahankar or pride of a person. Then I relate the story of Krishna going to Kaurava sabha and asking for five villages for the Pandavas, because that will bring peace. But Duryodhan tells him, we won’t let you go from here, we will put you in jail. Krishna laughs and asks him, don’t you know everything comes from me, and he shows him vishwaroopam. I have done research by reading the Prakrit Mahabharata by Srinivasacharya, and a translation by Raghav Menon. In that we don’t need the whole script, only the relevant portion, and the rest we do with music and song.

The second is on Shiva, on Markandeya, the 16-year-old who was the first to die at the hands of Yama. At that age, he becomes the devotee of Shiva, and when Yama comes for him, Shiva appears and rescues him. The third is the concept of Harihara - both are equal, one side Vishnu and one side Hara. The devotee says that even if they take a thousand forms, even if they are in different rupas, we always get their blessings. Then is Shankara Sreegiri by Swati Tirunal. It describes Shiva’s tandava. In that, I am playing the devotee and my husband will be dancing Shiva’s dance.


I have done solos many times – my beginning was as a solo artiste. Last year was a special occasion. My specialty is abhinaya, and since these stories are common, like Karnavadha – very dramatic – and because I am doing male roles, it is challenging, and I love to do that. We have to work on it one month at least to get the feel of it - music, words, script - so that it falls into place. Also, we are using sarangi instead of violin, that’s also very new, which was an idea by my son Veda.”