Spring in their steps 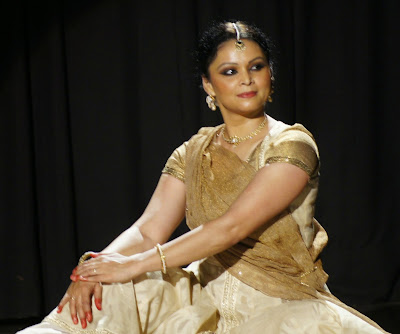 The temperature in Delhi now is making us all long for the balmy freshness of the recent spring. But the freshness of that season was recently brought alive by Kathak dancer Gauri Diwakar. She presented Sarve Nava, a spring-themed production, on the second day of the Spring Festival hosted by IIC. The entire collection of compositions brought the beauty of spring to life where all is young and new.

Gauri is a well-known Kathak dancer. She has been trained under Ms Sumita Chowdhary. Later, she received tutelage under Pt. Birju Maharaj and Shri Jai Kishan Maharaj. She perfected her skills under Aditi Mangaldas. She has been awarded the Ustad Bismillah Khan Yuva Puraskar in 2008, and the Shringar Mani in 2002. She is an A-grade artiste with Doordarshan and empanelled with ICCR. 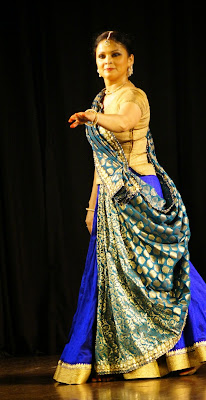 Her first presentation was on a shloka from Ritusamhara, about how spring or vasant affects every aspect of life – ‘charu taram vasante’ – with flowers blossoming, maidens wearing their ornaments, bees humming over flowers, trees laden with blossoms, air laden with perfume and water abounding with lilies. Even the evenings (pradosh kaal) is pleasant. Gauri exhibited some meticulous nritya for the piece.

The next piece was a nritta in taal Vasant. Gauri presented tatkaar, tihai, thaat, aamad, pairon ki uthaan, paran and parmelu. Her attitude and flair were flawless and the footwork excellent. During the presentation, there were interludes by pakhawaj, tabla and then a jugalbandi of both in nine maatras that had the audience in raptures. 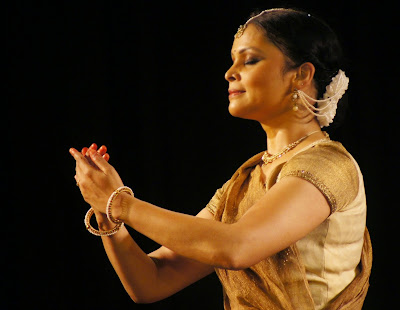 The next composition was by Bulle Shah, ‘Hori khelungi kehkar ke bismillah’. The composition is a Sufi one describing the ecstatic mood of the bhakta when drenched in the colours of bhakti. Gauri, using Vasant taal, maintained the pace of the piece using gat and footwork. Next, it was an abhinaya piece choreographed by her guru, Aditi Mangaldas. The poetry was by Suryakant Tripathi Nirala. Talking about the piece, Gauri said, “Since the title for the performance was ‘Sarve Nava’, I wanted to do something new. The text was sourced by Sanjay Nandan. All poetry cannot be put to music. But for this, Samiullah Khan composed appropriate music. The lyrics are erotic, describing the romance between the heroine and her lover, but Aditi didi choreographed it so well with subtle gestures that I was not embarrassed to do it, neither was the audience put to any discomfort watching it.” ‘Naino ke dore gulal bhare’ (eyes red with red colour) – the poetry is aesthetically sensuous, describing the heroine and her lover playing Holi. They have spent the night awake in bed, making love in dim light. The poetry describes them kissing. In the tight embrace, she feels the tightening of her choli (blouse). The abhinaya she did sitting down suggested the eroticism of the poetry while still not making it too in-the-face. It was a combination of Aditi’s choreography and Gauri’s graceful execution that made the piece stand out. The accompanists, Yogesh Gangani on the tabla and Mahavir Gangani on pakhavaj, were matchless as always. Excellent vocals and music were by Samiullah Khan.


The other performer for the evening was Urmila Satyanarayanan, a bright Bharatanatyam dancer who has trained under Padmashri Dandayauthapani Pillai, Kalaimamani Shrimathi K J Sarasa and Padmabhushan Shrimati Kalanidhi Narayanan. Urmila has many awards to her credit, mainly Kalaimamani in 1997 by the Tamil Nadu state government. She started her performance with a pushpanjali and verses in praise of Lord Ganesha. Ganesha has attributes like his elephant ears and ‘sutra’ on his shoulders, which she demonstrated through various mudras. He is the son of Maheshwara and is worshipped as ‘vighnaharta’ – the one who removes all obstacles. 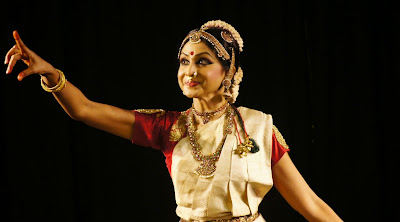 The second piece was a varnam in raga Malika, composed by Lalgudi Jayaraman. Urmila has a slender frame and long legs, which make her stances and dance moves look very graceful. She covers the entire stage with ease. The piece, titled Navarasa, depicts how the nine rasas are embodied in the goddess Meenakshi. She fights the demons in warfare with valour - veer rasa. She is attracted to Shiva as Sundraeshwar- shringar rasa. She gazes with astonishment as Shiva drinks the poison – adbhut rasa. She embodies the hasya rasa when she plays with her friends and when she is consumed with disgust at the demons – veebhatsa rasa. She feels anger at her father, who degrades her – raudra rasa. She feels fear – bhayanakam rasa. When she thinks of her devotees, she is displaying karuna and shaanta rasa. Urmila performed the piece with good footwork and nritta, sharp hand movements and excellent abhinaya. 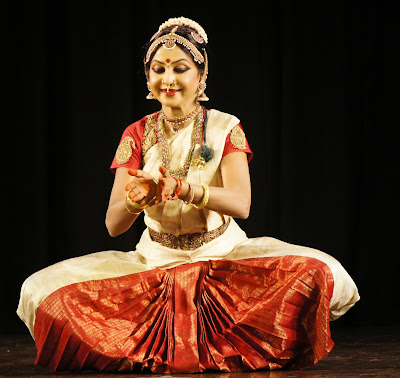