The spring in Delhi was a little prolonged this year as the rains did not let the temperature rise. The flowers in the foyer at Stein Auditorium at IHC enhanced the pleasant ambience of the unusually pleasant weather. The occasion was Sur Shringar – a festival organized by Yogdan, an NGO which provides livelihood and education to the underprivileged. Shri Madhup Mudgal gave a classical vocal recital and Geeta Chandran performed Bharatanatyam. Both the artistes are masters of their craft and proved that despite performing in front of a packed house, their immersion in their performances and its selfless pleasure is complete.

Pandit Madhup Mudgal, a Hindustani classical music vocalist, is the disciple of Kumar Gandharva. He has been honoured with the Padma Shri by the Indian government. Madhupji began his recital with a composition in raga Yaman Kalyan – ‘Devo daan mohe, mange sur bheekh daas tihaaro’. This composition was Kumar Gandharva’s, to whom it was a tribute on his 95th birth anniversary. In drut, he sang ‘Kinare kinare dariya’ in the same raga. The next composition was in raga kamod – ‘Kaun tumhe batlao’. The drut composition in the same raga was –‘Ae ri mai jaane na doongi’. He ended his recital with a thumri in bihaag. His control over his voice and the modulations were all excellent.

Geeta Chandran is a renowned Bharatnatyam dancer. She began her performance with a Govinda vandana. The piece was based on a composition by the haveli sangeet poet Hita Hari Vallabha. It’s an original composition in raga malika and tala malika, an ode to Lord Vishnu, and enshrines the concept of Sanatana - one in many, many in one. It elaborates the different aspects of Krishna’s life based on the Bhagwatha Purana. In her depiction, Geeta elaborated on the four-armed posture of Lord Vishnu with gadaa, padma, shankh and chakra. The lyrics are beautifully synthesized so that words with similar prefixes are juxtaposed- vishvaroopaye vishvakaaye (He embodies the universe), kamalnabhaye (lotus emerging from his navel) kamlapati (goddess Laxmi’s husband). Geeta depicted the reclining posture of the Lord on the sheshnag with Laxmi caressing his feet and the lotus emanating from his navel. The nritya depicted the destroyer of demons like Kansa, Keshi and Chanur, and the charioteer of Arjuna (Parthasarthaye namah). The cowherd of Vrindavana (venugopal), with the cows listening spellbound to his flute, as he roams the banks of the Yamuna, his ear ornaments brushing his cheeks. He is the husband of Rukmini and the lover of gopis. And finally, he is the jagat guru who takes you across the sea of the worldly mirage. It was a nritya piece executed with perfection. 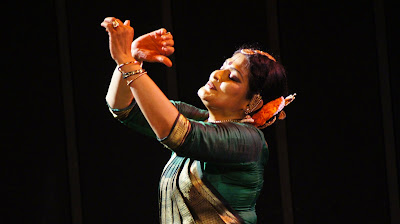 The next piece was shringaar vaibhavam. In the season of spring, when love is in the air, Shringara becomes the king of all emotions. The choreography began with a canto from Damodara Gupta’s Kuttinimuttam. Geeta depicted Kamadeva as the bee who kisses the face of his consort, which is like a flower with a thousand petals. The fluttering movements of Geeta’s hands, denoting the hovering bee, exuded sensuality. It is not only humans but also the birds and animals which get affected by Kamadeva’s arrows. 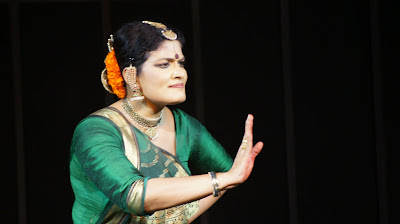 This invocation of Kamadeva was followed by two verses from Kalidasa’s Ritusamhara, sixth canto. Here the lyrics and the dance described Vasant as the warrior or Vasant Yodha (warrior Vasant) for the season. Mango blossoms are his sharp arrows, bees in rows his humming bowstring. Trees (dhrum) laden with flowers (pushp), water (salilam) abounding with lotuses, the air sweetly scented (pawan sugandha) – this is what the days are like and the twilight (pradosh kaal) is very pleasant. While the entire creation – flowers, birds, animals – are enjoying their union, the hero and heroine hang up a swing on a tree. The heroine swings up while the hero pushes her swing higher. This was a very aesthetically presented piece with spellbinding footwork, abhinaya and facial expressions. 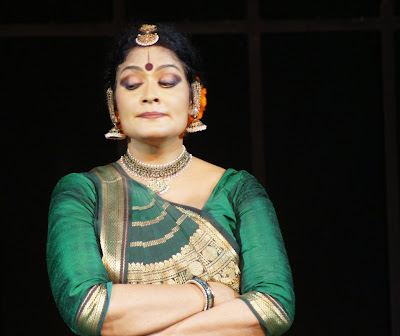 The next piece was the showstopper for the evening. It was about how women can gossip and talk maliciously about each other. Elaborating on the piece, Geeta depicted a sakhi inviting her friends for a game of dice. It is then that they start gossiping about one of them rushing out to meet Krishna. This nayika does not bother about shame or dignity, which are all thrown to the wind. She is not perturbed by what her in-laws would say. So immersed is she in her ecstasy of meeting him that the pallu of her sari is falling off her shoulders. It was wonderful to see how Geeta could transform herself to a village woman ‘bitching’ about another. About the piece, Geeta said, “Choodare is a well-known padam in Bharatanatyam from composer Kshetrayya in Ragam Sahana. It is an unusual piece in that it showcases gossip, a common failing. I was taught this padam by the doyenne of abhinaya, Smt. Kalanidhi Narayanan. The narrative shows a group of women spying on a neighbour's daughter-in-law jauntily running on the street to meet her lover Krishna. They stop her and probe where she is off to. To their surprise, she openly tells them that she is off to her tryst with Krishna. Stunned by her boldness, they launch on a detailed character assassination saying that despite belonging to one of the best families of the community, look where she is taking their reputation. Without a care for the way she looks, with exposed breast and a sprightly walk, she breaks all taboos in her eagerness to meet Krishna. They finally surmise that no one can fight fate, and probably she was only acting out her destiny. The undertone of humour in the padam was never abandoned.” 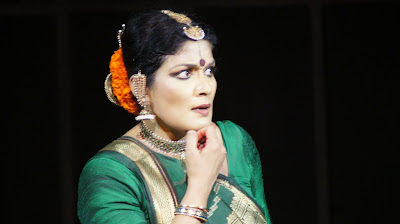 The following composition was natanam aadinar in ragam Vasantha, set to ada taalam in a cycle of 14 beats. A composition by kavi Gopalakrishna Bharathi, it describes the dance of Shiva, Nataraj, in the golden tillai hall at Chidambaram. The dance is so powerful that the earth shakes with its energy. Geeta did some well-balanced cross-legged lift stances and stances of Shiva with snakes and damru. She portrayed the eight directions (ashtadisha), creatures on land, in water and in the sky, gazing with reverence and astonishment. She ended the performance with the ever-enchanting sankirtan. Accompanying her were G Raghuraman (flute), MV Chandrashekhar (mridangam), Sudha Raghuraman (vocals) and Guru S Shanker (natuvangam).