On the 12th of April 2014, at Kamani Auditorium, The Prophet: Destiny, Divinity, Doubt was performed by Savitha Sastry, a well-known Bharatnatyam dancer. The Prophet is a production of Sai Shree Arts, the brainchild of Savitha herself and her husband, AK Srikanth, an author of stories. The format used for this performance was to use a traditional dance form to convey hitherto unheard stories. The performance is embellished with Rajkumar Bharti’s astounding background score, with the use of varied instruments, like the shehnai, sitar, ghatam, melodica and the oboe. When asked to give a message to her audience, Savitha and Srikanth said, “We are so grateful to the audience that came here, and we hope it has made a difference to some, specially the children from an orphanage school who had come. We hope some of them will take the stage some day and tell Srikanth to write about them. Do what you want to do – don’t draw boundaries,” said Srikanth. “Whether it applies to the classical dance system or whatever you are doing, it is more of a life perspective,” added Savitha. “Classical dance is not boring. It is not dated. It can be made into an interesting experience. By being on stage, I do not have any extra enlightenment to give you a message. It is your own unique perspective. For me, it is simply about dancing.” She said that it was entirely a team experience, and that she found it a challenge to play an emotionally charged character. 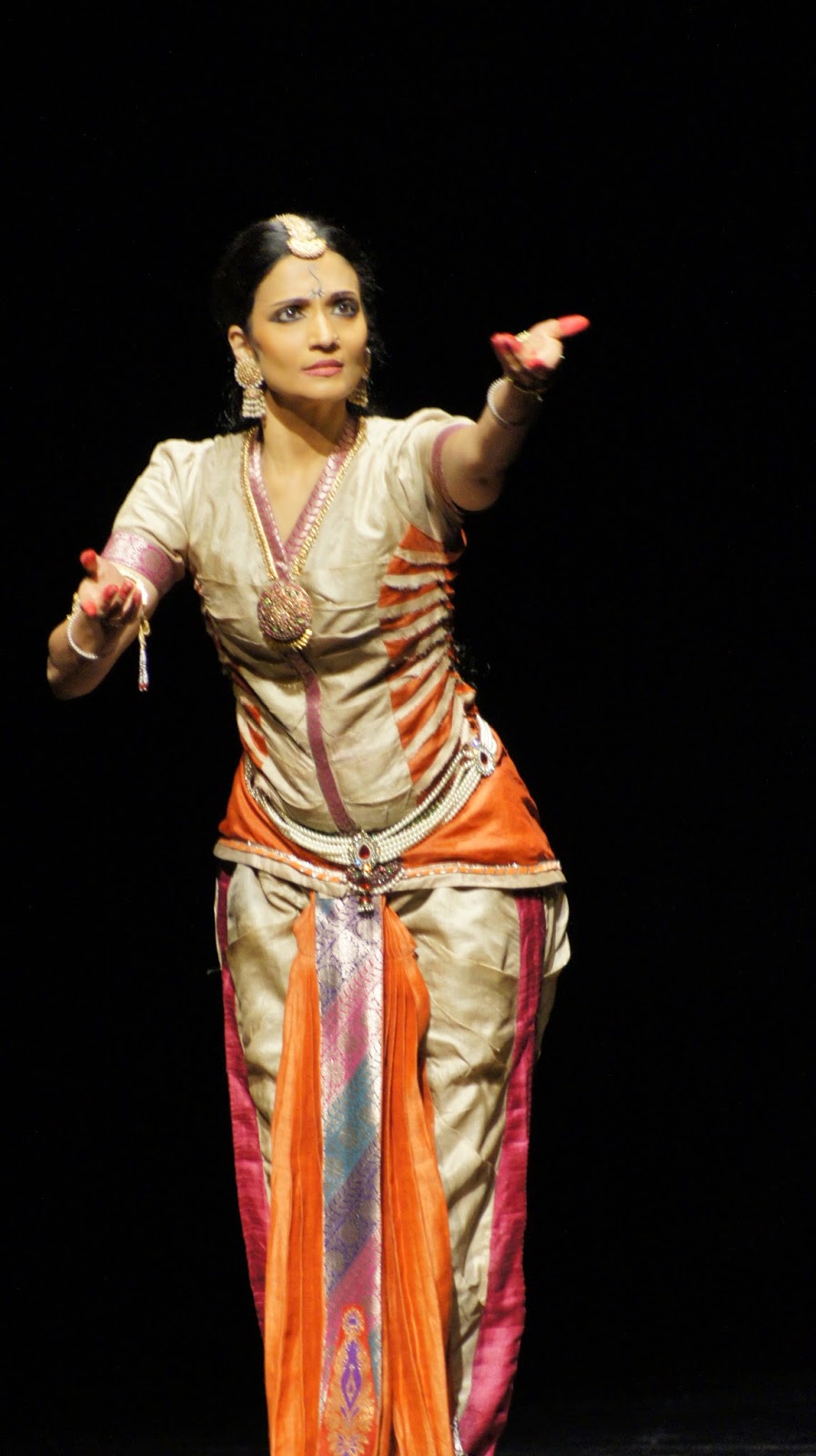 “God have mercy on the man who doubts what he’s sure of,” she said, quoting Springsteen. Devduta, the character she portrayed, had the choice of continuing to be the prophet, but she took her life one day before her predicted death because doubt clouded her reasoning. Savitha said that she chose a contemporary story because she wanted the younger generation to come and see the performances. “Classical dance can be an edge-of-the-seat experience like cinema,” she said. The production was divided into scenes or sequences from the life of Devduta. Each scene featured storytelling or abhinaya and part dance. The production opened with a scene to depict the procession of the followers of the ‘Prophet’. The costume for this sequence was a customised aharyam. The followers are playing on instruments like shehnai, mridangam, drums, sitar and flute. It is a joyous procession, with folks dancing while bystanders look on in wonder – ‘tu masiha hai, zamin par utra sitara, besaharo ka sahara, eesh ka sandesh lekar, hum sabhi ke beech’ (you are a messiah, a star descended on earth, a crutch for the helpless, bearing the word of god among us). 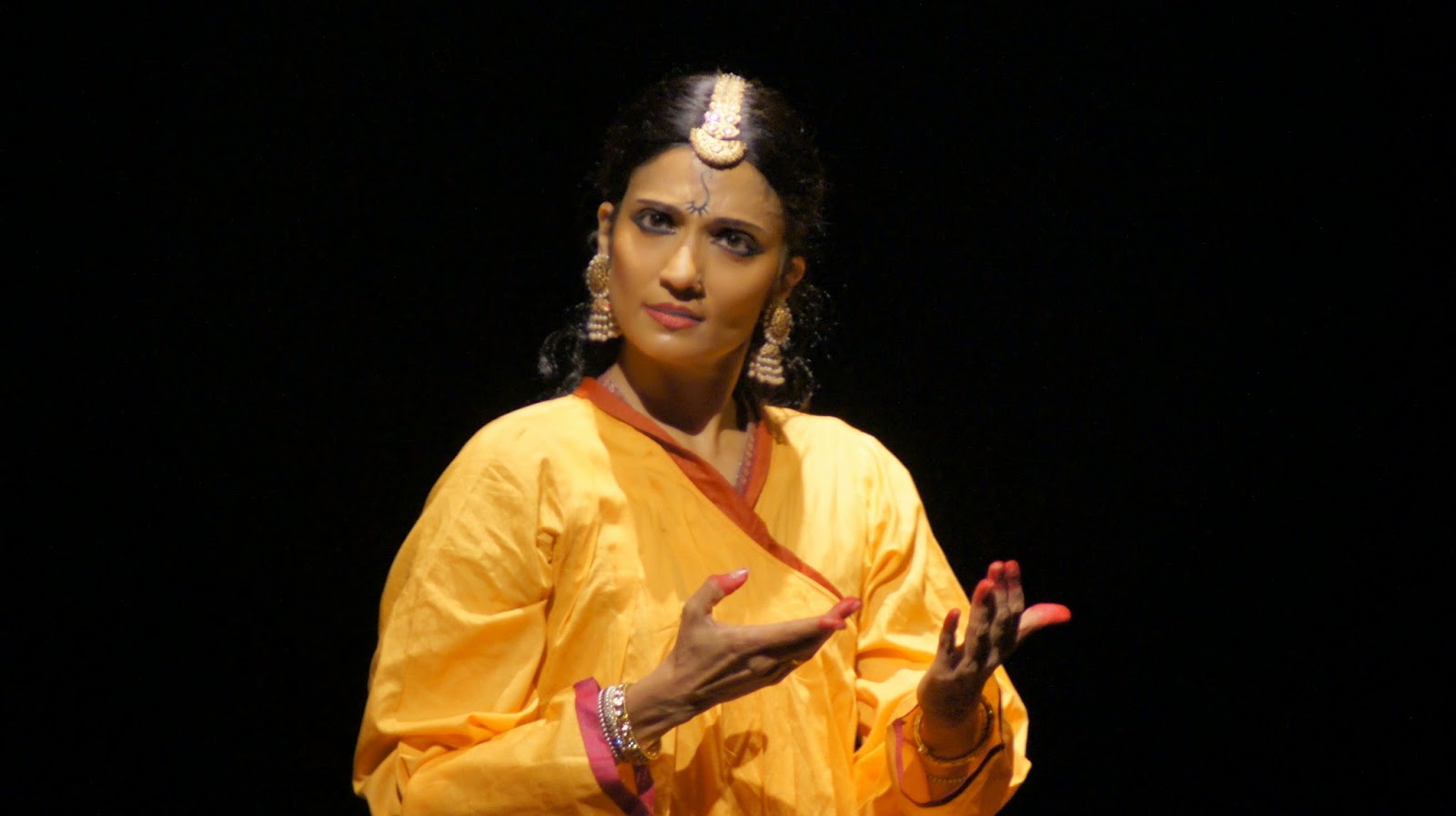 In the following scene, Savita appears as the prophet or Devduta, wearing a saffron robe. Devduta is in her chamber as the procession appears at the gate of the ashram. There is turmoil in her mind as to her existence. According to a prophecy, this day is to be her last. The voices of god that she heard told her so. The prophecy brought to the fore the questions in her mind. The question ‘who am I’ was mocking her. This question has been delved into in religious texts and debated by great men, and yet it is unique to each one of us. Who am I? Devduta questions whether she is a poet, a dancer, a prophet, saviour of the downtrodden, saviour of the lives of children, god’s chosen one. In the past, god had spoken to her all the time, and she had simply listened and obeyed – ‘rehnuma tha raah mein bhatkon ka’ (a guide for the lost). 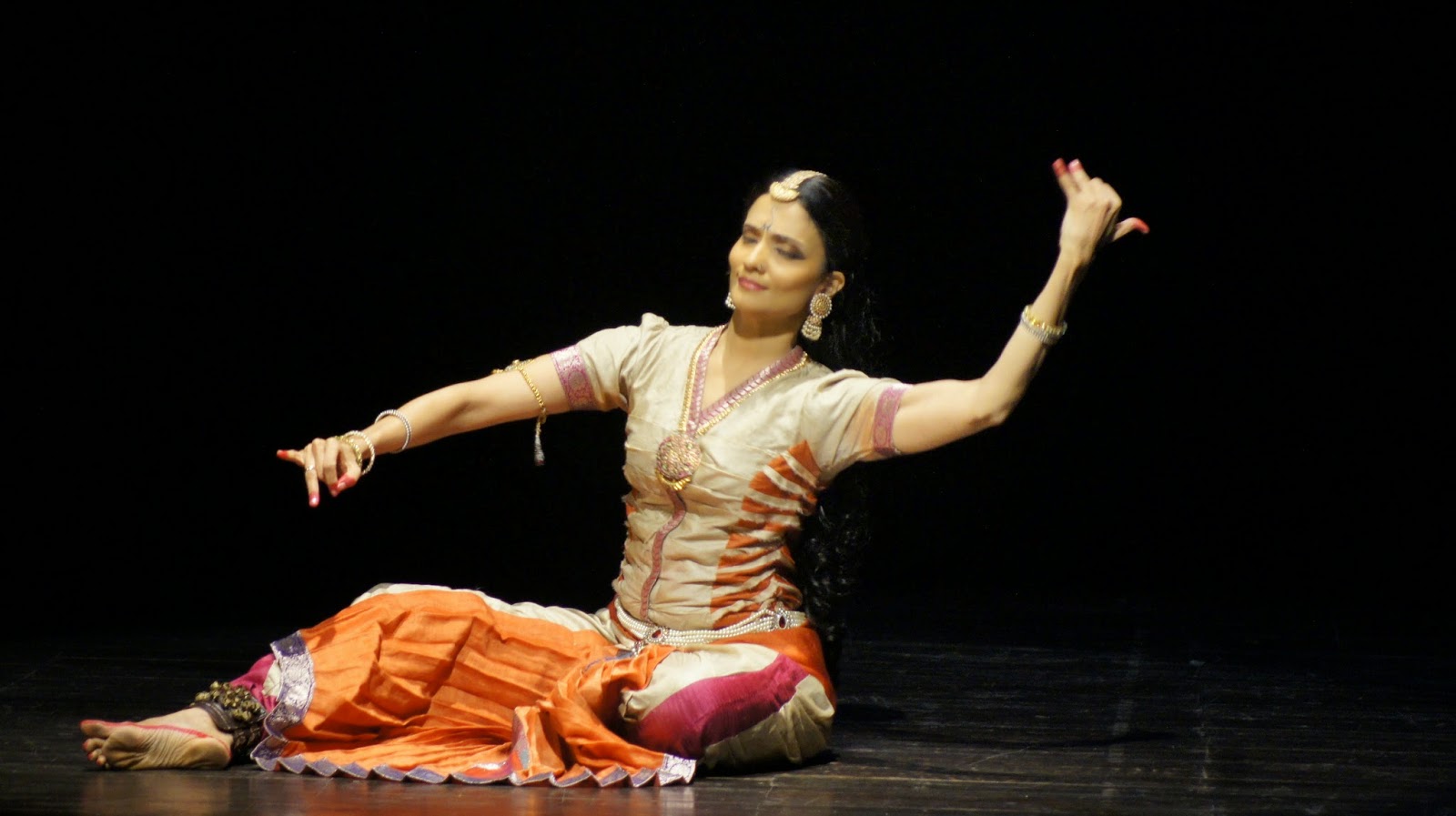 Devduta, with the turmoil in her mind, reminisces about her life. Her childhood was spent in the dregs of society. At this point, for the flashback, Savitha wore a white gown splattered with colours to show dirt and grime. Born in a poor family, living in a slum, she had a life of no consequence. Every moment was a fight for survival. The poverty-struck girl was hounded by the wolves in her chawl. She spent her time cleaning, sweeping and cooking. One day, as she goes out to fetch water from the pond, she sees a beautiful bird flying around. But suddenly, the bird gets injured. A shadow of the bird appeared on the screen behind her. As the bird lies writhing in pain on the ground, and is being eyed by a bird of prey, Devduta picks it up and caresses it, and hides it under the covers. Suddenly the shadow of a man appears in the background. It is Devduta’s father, of whom she is scared. She opens the door to him, and desperately fights back his abuse. The parallel is drawn with the life of the bird, but there is no saviour in Devduta’s life. Savitha’s abhinaya was very intense for this section, portraying the victimized girl – ‘Bali ka bakra bani, logon ne sataya, kasai ke haath katne ke liye pahunchaya, khoon baha, koi chhutkara na mila. Daldal mein phansi hoon, prabhu tum ho, yadi sach hai, toh bachane ka chaara batao’ (I was a goat for slaughter, tormented, sent to the butcher, I bled, there was no escape. I am sinking into this filth, if it is true that You are, then help me find a way out). 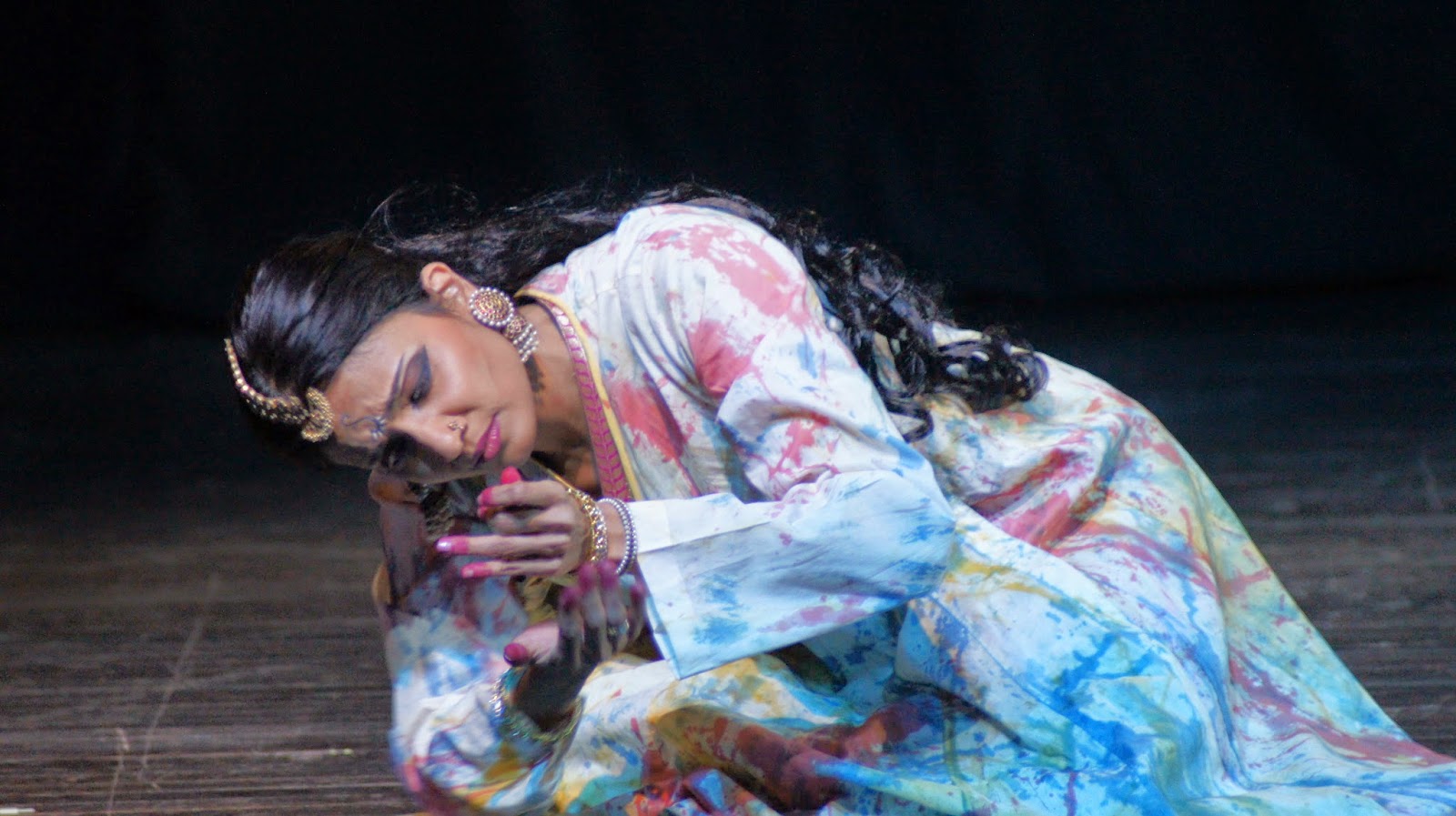 For the scene change, Savitha comes back on the stage as the prophet in the robe, and continues the story. It is said that the night is darkest before the dawn. Devduta’s life was at its darkest point, awaiting a dawn. She started hearing voices that she thought were those of god himself, guiding her, though it sounds unbelievable. But they were real. Obeying the voices, she runs away from home, and takes a job in a dance school as a cleaner. This gives her security, a home, food, and also the love of her life - dance and music. Savitha has a costume change again in her white dress as the sweeper. She depicted the enthusiasm of the girl, listening and learning while sweeping the floors. She finds a pair of ghungroos and ties them on her feet. ‘Na raja ke ghar paida hui, na dhan daulat ka kuch sanyog, na ghar-parivar ke apna kahoon, pehen ke ghungroo apne paon…’ (I wasn’t born to a king, I had no riches in my destiny, and no family or home of my own, but I have the anklets that dancers wear on my feet). The dance guru sees the spark in her, though he is also attracted to her looks. He trains her in dance while romancing her. Savitha was back on the stage, dressed now as Devduta, the dancer. Her nritta with balancing stances and stances in broad ply, spoke of her technique. Devduta is not only a dancer with technique, but a dancer with soul too. The voices dictated the rhythm of her dance. Savitha wore an orange odhni to depict Devduta the dancer. Her nritta showed grace, poise, finished movements and the pride that the character had now attained. 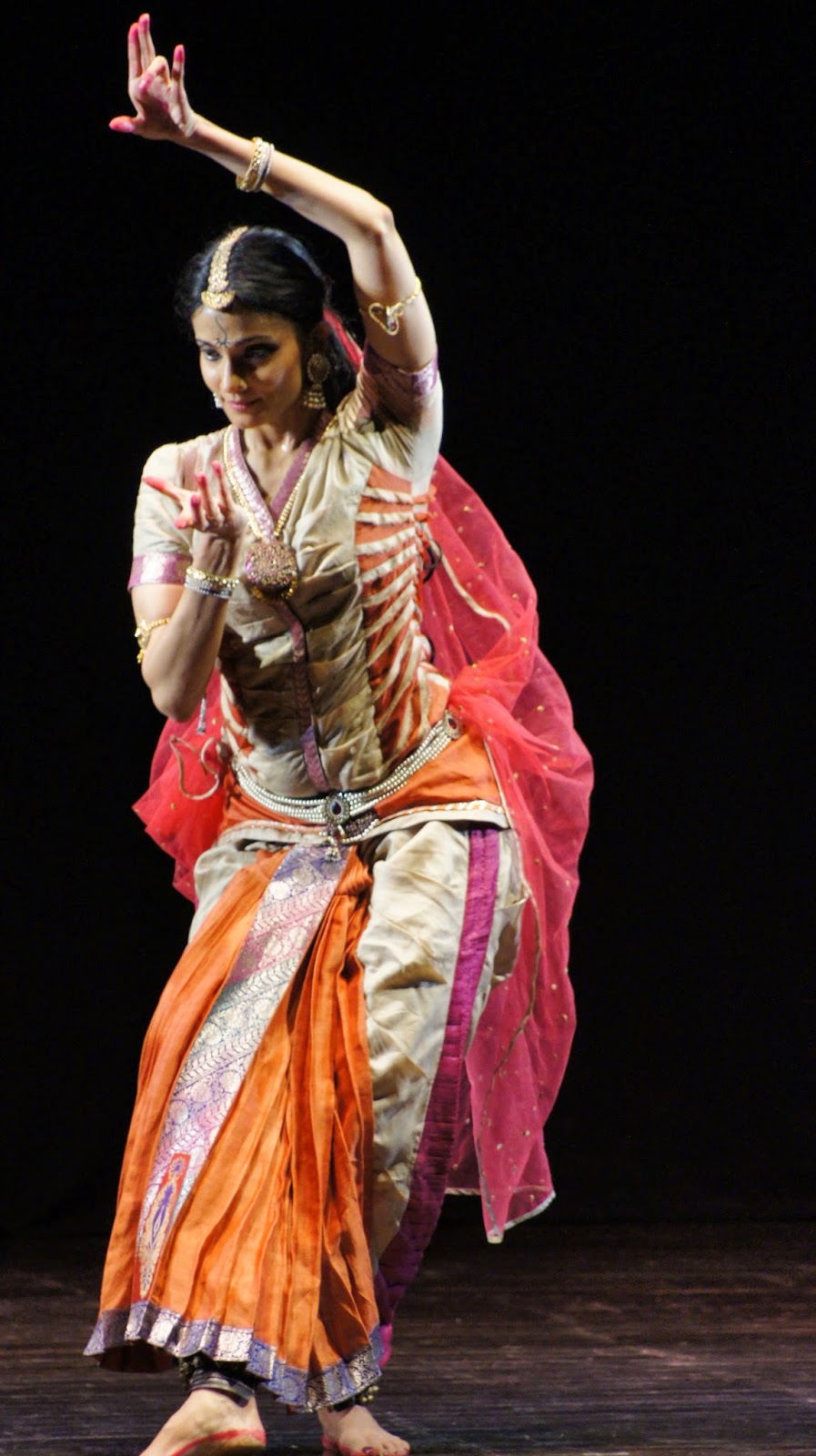 Relating the story further, dressed as the Prophet, Devduta says she now had performances that were reviewed by celebrities. She wins several awards, and is an apsara now. The grants help her make a modest ashram. When she sees the suffering around her, she tries to help the downtrodden. The destitute and poor are given shelter and food, and she becomes a messiah and finds her maqsad or motive for life. She talks and alleviates the pain of those in misery, and feeds the hungry with her hands. Now she does not feel the need to perform at auditoriums; thousands come to see her and seek her blessing, and she blesses them on behalf of god, who guided her through his voice. Her motive was to spread joy and equanimity – all were welcome, rich or pauper, mighty and weak – all came for help. ‘Jab paise thode se mile, ghar chhota banaya. Shohrat mili, badi main, bada dhan, ghar aur banvaya. Ghar se bahar nikal pado, unki duniya ko hi ghar samjha, apnaya’ (When I got some money, I built a small house. I got fame, grew, my wealth grew, I built more. I stepped out of the house, and embraced His world as my home). But the bubble of euphoria burst when a year back, in fact, 364 days ago, the voice of god tells her that she is going to die. For the climax of the story, Savitha comes back to the present as the prophet. She is praying with the holy beads when she hears the prophecy. In a state of shock, dropping the beads from her hand, she is struck by the fact that her body is mortal and has to go through the pain of death. She imagines the snake of death coming to bite her while she struggles to break free from its grip. The doubt that she is the chosen one makes her miserable. Even prophets come with an expiry date. The journey of her life unfolds before her right from the shack, little pond, dance academy, her guru, ashram and the children. The voices of god had ceased to come to her ever since the prophecy of her death. Was she any different from other mortals? There were no prophets, she came to believe. Systematically, she knocks out every ideal she had preached - everybody is a prophet. She lived a prophet and died as one. The prophet rose from the filth in life like a lotus, bloomed and then again got bogged down by the pain of living. Accept the glory of life and then the drudgery of death since it is inevitable.

Savita exhibited some excellent technique in her nritta and her abhinaya was truly commendable and theatrical. The story had a contemporary message to it. The music and lights enhanced the story. Savita did the artistic direction and choreography. Story, song, lyrics and script were by AK Srikanth, music by Rajkumar Bharathi, and artistic direction by Victor Paulraj . Costumes were by Arun Kumar Tiwari. 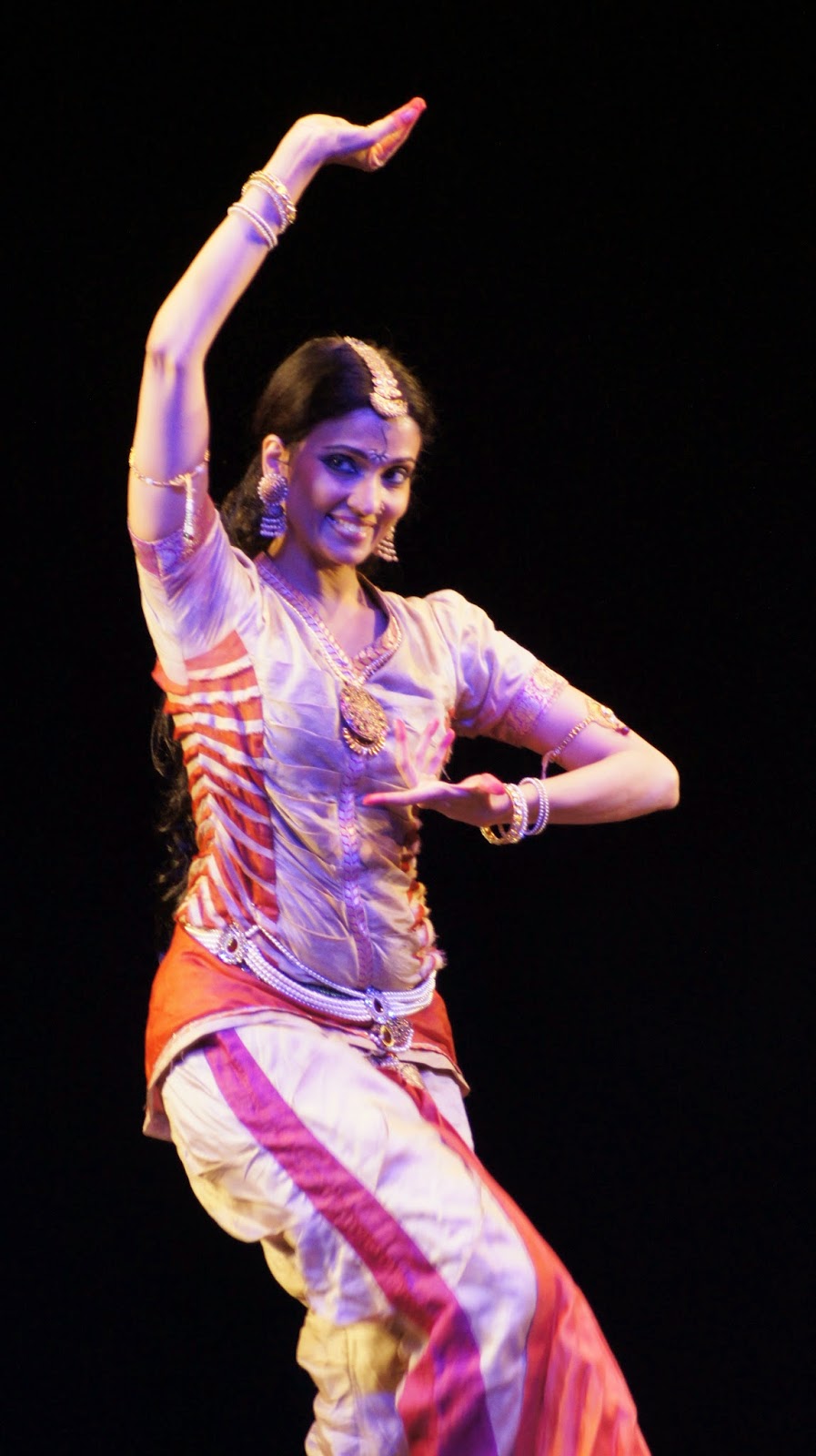