Jaya Prabha Menon gave a Mohiniattam performance on the 27th of December at the IIC auditorium. She has trained under Kalamandalam Saraswathy and Bharti Shivaji and has been mentored by Kavalam Narayanar Panikkar, who was present at the performance. She is the founder of the International Academy of Mohiniattam in Delhi. 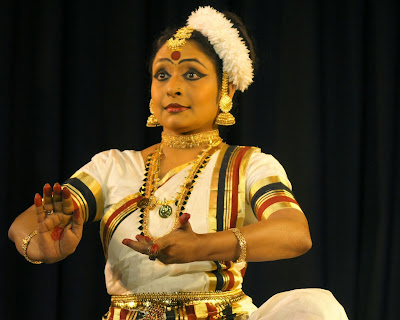 She started the performance with a Ganapati vandana. Lord Ganapati is the God of all rasas. He is the karunamay, vighnavinashak, ambasut, lambodar, chintamani, munimanasahans, mooshakvaahan, kartikey sahodar, siddhivinayak. Jaya depicted the attributes though gestures signifying the elephant trunk and ears, modak in one hand, with a round abdomen. The second piece was a naagatatvum. It has movements from kodiyattam which suits the mohiniattam. It is a kundalini pattu. The vibrant human power resides in the mooladhara chakra. It rises upwards towards the sahasrarara chakra where the divine or the ‘Ishwar’ tatva resides. Jaya portrayed the interplay between a snake charmer and the snake. While the charmer plays the ‘been’, the snake sways from side to side dancing to the tune. Jaya turned her pupils inwards to depict the snake. She defined the divine power in the form of Shiva, with ‘jatajoot’, flowing Ganga, ‘tripund’, ‘trinetra’, ‘galerundmaal’ and ‘dumru’ in the hand. The nritya and postures were impressive. It is this divine charmer who entices the flow of the energy upwards. 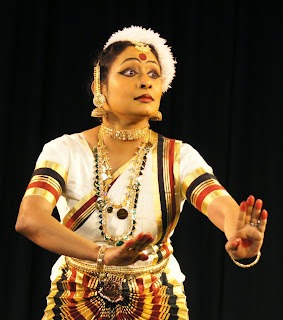 The next piece was an abhinaya piece – an ashtapadi by Jayadev. Jaya said this ashtapadi is about the sambhog shringar, about the blissful moments between the two lovers. ‘Sakhi he keshi madan morari’, Radha tells her sakhi to please go and tell Krishna about her desire. She talks of her pratham samagam under a bower in the nivrit nikunj. Jaya depicted the union and romance of the two lovers, a shy and coy Radha and Krishna, in his naughtiness, pulling her sari. Nature too is rife with romance, birds loving each other and the bhanvara hovering over the flowers. She ended the piece with a kiss between the two lovers on a bed of soft leaves, kislaya shayan. 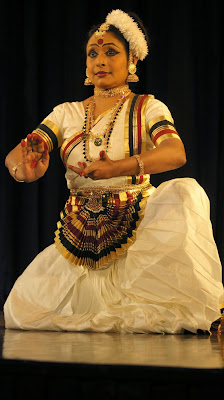 The performance came to an end with a piece about the ecstasy that an individual feels when he unites with the divine. Jaya said that the piece titled ‘Marmajeeva’ was based on marmatala, which is a regional tala of Kerala in 14 beats. ‘Jeeva’ addresses Krishna as Vasudevaya, Nandanandanaya
namonamah. Jaya portrayed the reclining posture of Lord Vishnu on the Adisesha. It was a pleasant performance with some excellent abhinaya. The accompanists exhibited their own excellence. Vocals by KS Jayan were impressive. Mrindangam by Thanjavur Keshavan was powerful. Flute by G Raghuraman needs no recommendation. On the mardala was Manoj and edakka by Satish Paduval. The compositions were by Jaya’s mentor, Shri KN Panikkar. 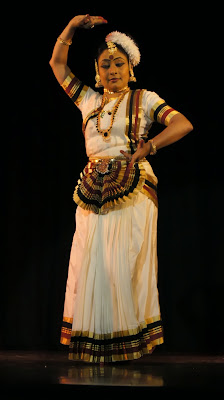