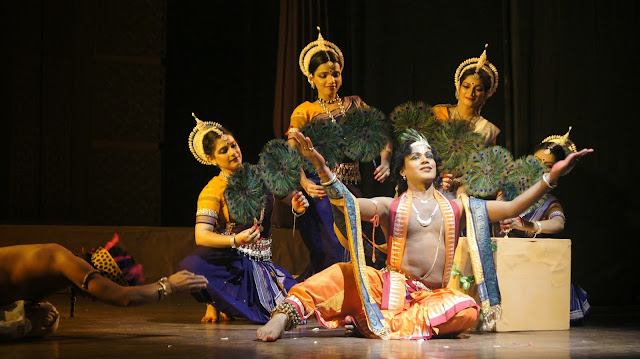 On the 7th of November, Natya Ballet Centre staged ‘Krishna’ at the Shriram Centre Auditorium in New Delhi. The choreographers for the ballet in Odissi were Guru Anirudh Das and Miss Nibedita Mahapatra. Anirudh Das was awarded the Guru Debaprasad Das Award in the year 1993. He is a senior scholarship holder and is empanelled as a dance teacher for overseas assignments by ICCR. He has performed in several dance festivals and teaches Odissi. Nibedita Mahapatra is a recipient of the junior fellowship and senior scholarship in Odissi dance from the ministry of culture, government of India.

About the choreography, Nibedita said, “It is revisiting the Krishna Leela through Yashoda’s eyes while she is relating the story to Devaki. Krishna’s life holds relevance in present times since these tales help to conquer evil within and without us.”

Before I begin, I would like to say that the brochure for the performance was designed very aesthetically. The entire face of Krishna was drawn with flowers, leaves and peacock feathers. Very few people make so much effort to design the brochure. 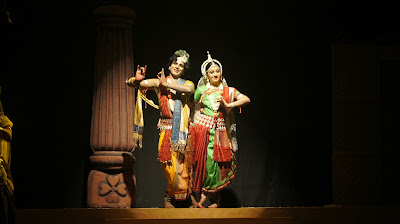 The legend of Krishna is five thousand years old and has been told and retold a million times. But each time, Krishna bhakts find something more endearing in these tales. The first scene opens with the dancers enacting the ten incarnations of Vishnu – Meen the fish, Kachchap the tortoise, Varaha the wild boar, Narsimha - half man-half lion, Vamana the dwarf, Parashuram, Ram, Balram,  Budhha and Kalki.

The narrative goes back to the time when Krishna decided to terminate his leela on earth and return to his dhaam. Fate has it that a hunter, Jara, mistakes Krishna for a deer and shoots Him with an arrow. Jara is remorseful but Krishna tells him that he is beyond death and all pervasive. Krishnam vande jagatgurum. In the following scene, Devaki, Krishna’s biological mother, is lamenting to Yashoda that she missed seeing Krishna’s childhood leelas. The entire ballet is about Yashoda narrating the episodes from Krishna’s childhood to Devaki. 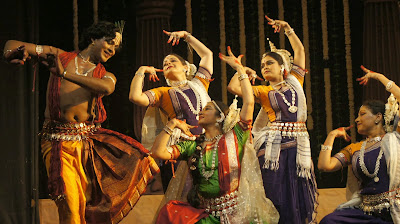 In Gokul, the infant Krishna is sleeping in the palna while the gopis and Yashoda are watching him and rejoicing his coming. Pauro Govinda baaje shankh bheri. Krishna grows into a toddler crawling around and winning hearts with his baby talk. Dikhaun Nandanandan guturun chalan totali bolan. As the naughty Krishna runs around, he steals butter and scatters it around. The butter is symbolic of the love that is produced by churning the heart of the bhakts and Krishna seeks that butter. The gopanganas are churning butter and Yashoda catches the little Krishna stealing butter and scolds him. She beats him up too. In the entire act, the little dancer playing Krishna was very cute. 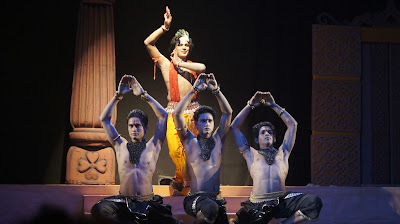 Krishna is then shown as an adolescent. He is playing with the ball on the shores of the Yamuna and deliberately throws it into the river. He then jumps into the river to retrieve it. What follows is a fight with the resident serpent of the river, Kalia Naag, who is then conquered by him. The dancers were powerful and the costumes appropriate. Yadukul nalin dinesh jai jai dev hare. The Lord rejuvenates the river. The next leela portrayed was the cheer-haran leela. The gopis are bathing in the river when Krishna steals their clothes. The gopis are then asked to come out of the water and beg for them. The objective of this leela by Krishna was to teach the gopis to shed their ego to unite with the Supreme. And then followed the Maharaas. Krishna, the Almighty is complete and endowed with the 16 kalas. On the full moon night, he plays on the flute to attract the gopis. The connect is like that between atma and parmatma. The gopis leave all their household chores on hearing the flute. The beauty of Radha is unparalleled – ang ang nache Radhika Rani Hari sange. The raas is a sangam of bhav – pranadhar ki greeva ka aalingan. The group of dancers did a very well-rehearsed piece with strong footwork. While the gopis are dancing, full of pride at having won over Krishna, he suddenly disappears from the scene. The gopis and Radha are left in abject despair. Raase Hari Vivit Vilasam Smarati Hasati. They are left with the memories of the union. They cry out in misery, call out to him and remove their ornaments. Krishna, when he realizes that the gopis have given up their pride, reappears and resumes dancing with them. The dancers did some graceful mudras and footwork. 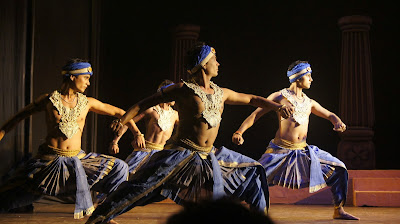 After defeating Kans, Krishna becomes the king of Dwarka. The next episode depicted was that of Draupadi’s  vastra-haran. The Pandavas lose Draupadi to Kauravas in the game of dice. Draupadi is summoned from her chambers and disrobed by Duhshasan. Krishna appears as a saree and saves the modesty of Draupadi. Again the portrayal and the dancing were good. Finally the episode of Geetopdesh was portrayed - Yada Yada Hi Dharmasya Glanirbhavati Bharatah. Arjun, looking at all his relatives in the opposing side, refuses to fight. But Krishna, his charioteer, enlightens him by showing him his virat swaroop and encourages him to fight for what he thinks is right. Some amazing group formations were performed. The aarti was done by the dancers to the tune of Bhaj Govindam, Govindam Bhaj Moodh Mate. Krishna and Radha were posing with a background of flowers and dancers all around. As a culmination of the performance, it was a beautiful scene. The dancers, the lighting, the music, the costumes and the choreography all were good, but the story did not make a connection between the various scenes. 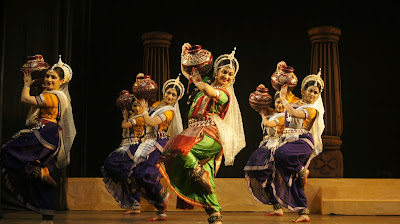