On the 12th of October, Cansupport organized Nirgun Naad, a concert by Vidya Shah, at the Bahai Temple Auditorium in New Delhi. 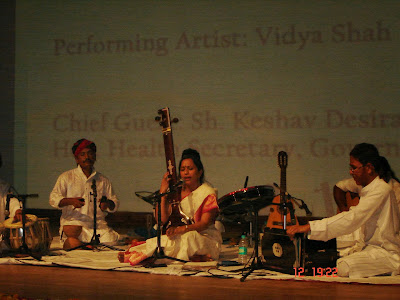 Nirgun bhakti is the worship of a formless God. God has no form, name, attributes and no rituals or religion attached. The mystics and Sufis who follow this belief have described the Almighty as their lover and themselves as His bride or beloved. The connect between them is not that of praying and begging for blessings but a pure selfless love and a lifetime of longing for the ultimate union. When quizzed about the theme of the concert and her choice of poetry, Vidya said, “The theme was proposed by the organizers. I have been interested in nirgun poetry and sufiyana kalam that I sang, so I chose Kabirdas, Paltoodas, Bulle Shah and a very abstract piece by Meera Bai. Ibne Insha  was a Pakistani poet from the early twentieth century who had been very inspired by medieval poetry. The piece by Bulle Shah – Mera piya ghar aaya laalni – signifies the timelessness of love. Love transcends time. There is a concept of ‘shoonya’ or a space like a vaccum in love. One finds one’s spiritual connect in that space where there are no other underpinnings and trappings. This is a very strong message in sufi and nirgun poetry. In fact in the Kabirdas poetry – Soona mandal mein mandala baje, taha mera man nache – the concept is to connect in the ‘shoonya’.  Here the message is to transcend dogmatic religious practices and it is significant to reiterate this message and its relevance. When I sing, it is music, and it does not necessarily have to be preachy. But still, the message can be carried. Then I sang the cult rendition by Kumar Ji – Heerna samajh boojh ban charna. The analogy and metaphors drawn are between the material world, the body and the five senses. Tread carefully through the forest, the poet tells the helpless deer, since the hunter is on the lookout for him. It’s an analogy commonly presented by poets.”

She started the concert with a composition by Kabir Das – ‘Ab man matvara, unmani chada magan ras pive tribhuvan bhaya ujiyara. Soone mandal mein mandala baje , tahan mera man nache’. The song highlighted the philosophy of reaching a zero state of mind. Unless you empty your mind, the Almighty will not house himself there. The poetry ended with ‘bhav bhandan chhute jyotir jyoti samani’. The second composition by Bulle Shah, ‘Aaj piya ghar aaya lalni , ghadiyali deu nikalni’. The poet wants to do away with the timekeeper while his beloved is around so that time comes to a standstill – ‘anhad baaja baje suhaana, namaz roza bhool gaya’ - anhad is the divine sound. The next composition was again by Bulle shah. Here, he gives a feminine touch to the poetry ‘Main rootha piyu manau ji, ik tuna achraj gaaoon ji’ - he wants to cast a spell on his lover to win him over - ‘Bijooli hokar chamak daraoon badal ban ghir jaaon ji’. 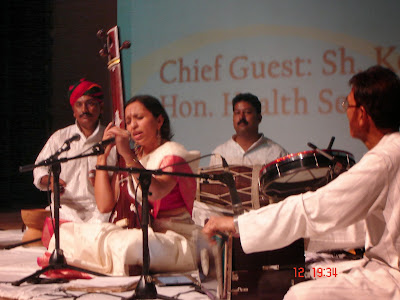 The following Meera Bai bhajan was my favourite. In this song, she desires to become her piya’s bride wearing a ghaghra like the earth and a sari like the sky. The stars, the moon and the sun are her ornaments. She talks of an out of body experience where the entire creation unites you with your lord. ‘Dhaaran sareekha pehnu, ghaghra amber, sari odhun, naulakh taara mhare ang lagaye do. Chand suraj mhare ang lagaye do’. The imagery is so beautiful and Vidya singing with the flavour of Mewar added to it. Chugge Khan played a string instrument called ‘bappan’.

The next composition was Kabir Vani, music by and sung by Pandit Kumar Gandharva. ‘Heerna samajh boojh ban charana’. Man has been called a hapless deer who ventures out into the world or ‘van’, where there are five ghirna, the five senses that are like hunters trying to capture him. ‘Unke nazar nahin padna’ - the poet warns the deer that he is going to be hunted and his meat sold. So a safe way is to surrender yourself to your guru who will then take you to your destination safely. ‘Guru ke charan chit dharna’.

Finally, she ended the concert with a very famous Sindhi song – ‘Mast Qalander’ - putting in a lot of life into it and asking the audience to join in. Her broad and affable smile lights up her whole face and she adds a lot of personality that immediately connects with the audience. A very enjoyable concert with a message which was nevertheless delivered. Accompanying her were Badloo Khan on the harmonium, Shanti Bhushan on tabla, Amar on the guitar and Chugge Khan of Rajasthan Josh on various instruments.