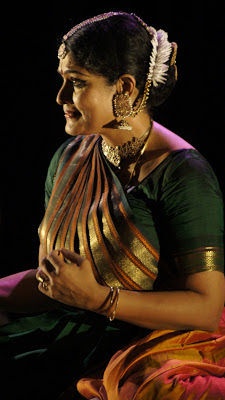 Somebody comes knocking on your door, and offers to take you by the hand on a journey of pure pleasure and fulfillment that satisfies your soul. That is the kind of experience  you get when you have an opportunity to watch Geeta Chandran dancing.

As part of a performing arts project for the Ministry of Culture, Carnatic vocalist Sudha Raghuraman presented ‘Ashtadarshanam’ at the IIC in Delhi on the 8th of June, 2013. Her performing arts project sought to illustrate the complex links between ‘raga’ and ‘bhava’, and to catalyse the performance she invited the renowned classical Bharatnatyam dancer Padmashri Geeta Chandran. Geeta was trained in the art of abhinaya by her first guru Swarna Saraswathi.

Rajiv Chandran, while introducing the production, said, “Ashtadarshanam is not just about eight nayikas, but also about an eight-directional, or in fact, a multi-directional view of ‘bhava’. It is an attempt at exploring the various levels at which music and dance are linked to each other – words, lyrics, meaning and silences. Where does music begin in the body and where does dance begin? What is the cement between raga and bhava?”

Geeta talked extensively about the evolution of the production. “So many years of learning, forgetting and re-learning give you perspective. And then, reading the poetry and revisiting the miniature paintings allows the vocabulary of dance to grow. This performance was an attempt in that direction - this vocabulary of dance grows each time you visit it. In the first piece, the storyline just grew as we were working on it. There was no master plan to show which nayika precedes which one in which sequence. We discovered the story as we were going about it and the music inputs just happened as we were workshopping it. That is the intrinsic link between music and dance. The musicians have to understand every thought, every breath of the dancer to coordinate the music. First, it is the poetry, then the music and finally, the dance. Then, the three have not to stand out as individual elements, or make selective statements, but become seamless. That is the engagement in this performance, or for that matter, that is what dance is all about. These days, nobody has the time for the vocabulary of the dance to grow, for silences, for pauses, and what they impart. It becomes like calisthenics to a certain degree - something has to be going on on stage all the time. Dance is a reflection of society. If society is not ideal, the dance isn’t either. I am at that stage in my life when I do things for myself. I dance for my own satisfaction. And this piece has been a reflection of it. The male abhinaya I’m doing after 15 years and the initial performance was very different. The Ashtapadi has always been with me and it has always been a challenge since it has been done so many times and the poetry is so filigreed that it becomes difficult to give it another aspect besides the song and the music. It is difficult to say something that has not been said in the poetry. So I took on the challenge and worked on the posture; and then we thought of using light as a choreographing device. Light in classical dance is used only to make the dancer visible - chehra dikhna chahiye. But we thought of using it to set the mood for the performance and lead the audience into the piece. First, I decided to do the entire piece in silhouette, but that was not possible because of imperfect lighting. So I made Deepa (Dharmadhikari, her student) listen to the poetry and sit through the rehearsals. That luxury I had since she is my student and she is very dedicated. Using light as a choreographing device has yet to grow in classical dance, though it has been explored in experimental work. Ennaramam is also an enriching piece, since every time you visit the grand temple of lord Chidambaram, you feel you see something new that you missed the last time. And it is the same with dancing this piece - that each time, you add something new.”

When Geeta was asked about the personal touches she gives to every performance, she said, “It is all about visualizing the piece. My students come and tell me that we have done three rehearsals, and all three are different. The interpretation and the portrayal are different each time. Today, for instance, the nayika is shy, and in the next rehearsal, she is not. So each time, it’s a different experience.” 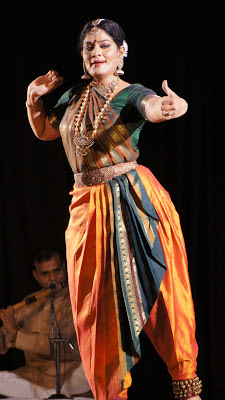 The performance began with the singing of a shlokam by Sudha, emphasizing the four bhavas – dasya, sakhya, vatsalya and shringara - as the base of chaturvidha bhakti. The poet asks the listener, ‘Tatastha hoyeke hriday vichar, sab ras se hai saras adhik shringara.’ Shringara is the most important of all the rasas. Next, Geeta presented a piece about the nayikas in shringara rasa, as described in ancient literature. Focusing on rasaraj shringara, the various moods of the love-struck heroine were depicted. Viraha and sambhog are intertwined, abstract feelings. The soundscape included ragas on G Raghuraman’s flute, raga Alpana, swaraprasthana and tanams by Sudha. Geeta presented an abstract narrative in which she wove together several stories of nayikas in love. In the first story, the heroine is portrayed as waiting for her beloved. She ties a toran on the door of her house, adorns her hair with a gajra while grooming it, chooses the best sari and prepares the bed. Here, she is the ‘vasakasajja’. Next, when the nayak fails to appear, she steps out boldly in the forest in the night to look for him. She tells her nupur or anklets not to make a noise. She covers herself with a dukul, but her feet are being pricked by thorns – this heroine is the ‘abhisarika’. The next story portrays the non-arrival of the nayak – ‘virahotkanthika’ is the heroine, torn by longing for her beloved. She is in intense pain as her beloved has not come to alleviate her pining. She tells the cuckoo to stop its singing, since it is worsening her anguish. ‘Vipralabdha’ is the one who has given up hope. When the nayak finally makes an appearance at her doorstep, the annoyed nayika says unkind words to him and shuns him. That is the anger and frustration of the ‘khandita’ nayika. The abhinaya by Geeta left the audience awestruck, and it had all the nuances of a woman in love. 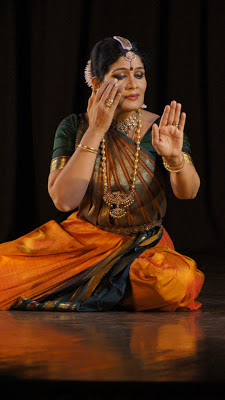 Men do fall in love, and it is only the brave ones who experience this emotion of being love-struck. The first part of this was a solo musical rendition by Sudha of Arunachala kavi Rayar’s popular Tamil padam in ragam Bhairavi, where the poet describes the initial stirrings of love that Lord Rama felt when he first got a glimpse of Sita. The second section of nayaks in love was the portrayal of two chauras from Bilhana’s Chaurapanchasika, by Geeta. To create dance from these Sanskrit verses, Geeta drew inspiration from the Chaurapanchasika miniature paintings from the collection of NC Mehta. Geeta presented two chauras – in the first verse, Bilhana reminisces about Amravati’s incomparable physical beauty. Moon-faced, heavy-breasted, forever young, she has a lustrous beauty. This is while he is awaiting his beheading by Amravati’s father, the king, in the jail: ‘shashi-mukhi, navyauvana, gaurkanti’ were the depictions of Amravati’s beauty. In the second verse, Bilhana remembers how Amravati shunned him in anger. She is the ‘roshita-mukhi’. He tries to embrace her and kiss her, but she breaks into tears. Panicking at having upset her and not knowing how else to comfort her, he falls at her feet, begs her forgiveness and says that he is a slave of his priyatama. It is said that on hearing the poetic lament of her love, Amravati’s father was so moved that he pardoned Bilhana. Geeta’s portrayal was simply stunning. Using a stool to depict the jail, she changed very naturally to masculine mannerisms. Her gait, her stances, all reflected male mannerisms. Sudha’s soulful singing and Geeta’s abhinaya made it a moving experience. 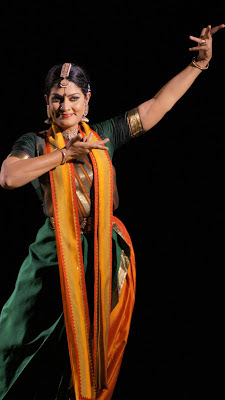 The next section explored the linkage between word and bhava. Geeta danced to Jayadeva’s Ashtapadi – ‘sakhi hey keshi madana mudaaram’. She chose to portray only the sthayi bhava of the verse. She portrayed Radha’s first tryst with Krishna. Radha is narrating this encounter to her sakhi. Geeta began the performance with a posture where she is making a drawing of Krishna on the floor. The coy Radha is sitting in a nivrit nikunj, where Krishna comes and embraces her. She can feel the tremors in her body at that prathama samagam or the first meeting. Krishna then loosens her waistband and garment. The shy Radha is left totally bewildered and ecstatic with love at the first kiss. Their samagam is like the union of chakva-chakvi. Geeta danced the entire piece sitting down, enacting the bashfulness of Radha through her expressions. A part of it was portrayed by turning her back to the audience while she’s gathering her garment and is being loved by Krishna. The lighting by Deepa created an amorous mood for the piece, with the lighting focused just on Geeta and the rest of the stage in shadow, just as in a lata nikunj. Geeta proved that dance could be evocative and communicative. The singing by Sudha added to the romance and the poetry. 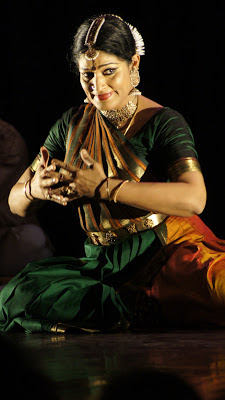 Sudha concluded this section by singing a jaavali by Maharaja Swati Tirunal of Travancore, where the heroine taunts Lord Padmanabha for delaying his arrival. The jaavali was sung in raga Bihag. Next, Geeta did a traditional padam by Gopalakrishna Bharati in ragam Devgandhari. The devotee is stunned by the grandeur of the temple of Lord Nataraja at Chidambaram, and presents the plea that he wishes to spend several lifetimes at the feet of the Lord and not go elsewhere. The devotee bathes in the river and offers flowers at the feet of the Lord. The narrative is then about the description of the inner sanctum. Geeta and Sudha concluded their performance with a sankirtan dedicated to Radha Raman. She always dances this sankirtanam with the fervour of a devotee – ‘Vanamali Vasudeva Jagamohan Radha Ramana’. The sankirtan had the audience swaying to the music. 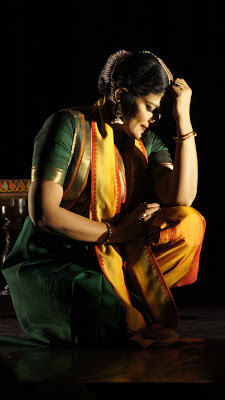