The International Ancient Arts Festival/Symposium was held at Kamani Auditorium in Delhi on the 22nd and 23rd of May. Artwork by underprivileged children and gifted children, healing sculptures by Manissha Khanna and Yoga accessories by Bijoy Lakshmi Hota were on display in the foyer. The theme of the festival was 'the beneficial aspect of sound'. Sound vibrations, which many believe human beings are made up of, are a powerful tool for restoring harmony and perfection within our bodies and minds. 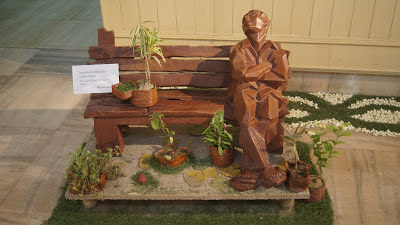 Reela Hota is a dedicated Odissi dancer. She started her training at the age of 8. She has trained under Guru Gangadhar Pradhan, Guru Madhavi Mudgal and the legendary Guru Kelucharn Mahapatra. She has performed extensively and has received the ‘Sanatan Nritya Puraskar – 2007’ for her contribution to Odissi dance. 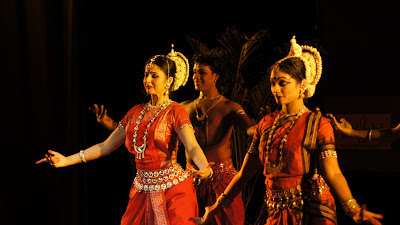 The performance was about Sanskrit, the matrubhasha. It was a fusion of Odissi and classical ballet on the healing and transcendental aspects of Sanskrit. While talking about the performance, she said, “It is all about propagating ancient culture, lifestyle, spirituality and language, which are intermingled . I strongly believe in the ancient and in spirituality. I work on expressing ancient wisdom through dance just as I did on Yoga, on Tagore’s compositions and this year on the ancient Sanskrit language. I came across an article by my mother on Sanskrit, so it was her idea to translate it into dance to make it different from the previous productions and add a classic element to it. The whole idea of bringing an international element to it was also hers. I had contacted my colleagues all over the world to help bring the ballet artistes here. A friend whom I had met at the ashram responded and helped me contact the ballet company.


The evening was inaugurated with the lighting of the lamp by culture minister Chandresh Kumari Katoch. The first piece was an obeisance to the ‘supreme power’ – that which creates (srijan), looks after (jagat palanay, nirvikalpam) and annihilates (bhishan, bhishanaam). ‘Twayam Smarami Bhajami’ – I remember thee and chant for thee. It was an Odissi presentation with all the grace of this dance form. The second piece was a fusion between Odissi performed by Reela Hota and ballet performed by Canila Bogdan Stefan. Even before Creation, the Supreme Power existed. It is the primordial sound which emanates from the supreme power. From the resonance of ‘Om’, 50 different sounds emerge which form the Sanskrit syllable. Each of these syllables represents a cosmic force. From ‘Omkar’, music emerges and resonates in notes in instruments. Stefan had very strong ballet movements and there was a fine blending with Reela's rhythmic Odissi moves. The last lift of Reela by Stefan left a lasting impression. The third piece was about balance. The Universe exists because of a balance in the forces of nature. Symphony or ‘raga’ is a fine example of balancing the notes. This piece was called ‘Birth', and was performed by ballet dancers. Though my knowledge of ballet is limited, the music score was good and dancers showed a lot of technique, flexibility and grace in stretches, pirouttes and lifts. It was an impressive performance. 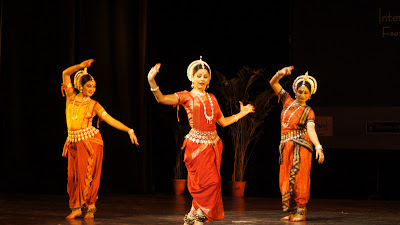 The next section was an Odissi one, with a conceptualization that was very distinct. Our body is made up of five chakras. Dhwani or sound activates these chakras. The Sanskrit words, when pronounced, activate the chakras in a manner that they have health benefits. For every chakra, a small piece was enacted and then the chakras that were activated were explained. In the first, the beauty of nature was depicted – bhusundaram, pushpam sundaram, renu sundaram, sundaram ambaram, kunjan madhuram, sameer madhuram, nirjhar madhuram – the repetition of ‘ram’ activates the Manipura chakra. The next section depicted a couple living happily and lovingly in their house. They welcome their guests with a namaskaram, ‘aagachcham’ (come in), offer her food and drinks and are blessed with mangalam in return. The words ‘kushalam, sakalam, mangalam, jalam, phalam, sukhibhavantu tava kulam’ – specifically, the repetition of ‘lam’ - activates the Mooladhara chakra. The following piece shows a child playing with her mother, and then the child picks up mud to eat. The mother admonishes her about eating the mud. The child replies, “"Aham khaadaami, aham khaadaami, na aham gachaami, aham kridaami, aham na shayanam karomi.” The repetition of the ‘hum’ in ‘aham’ activates the Vishuddhi chakra. The piece ended with a stuti of the lord – “Prabhu niranjanam sarva jana priyam karunaatitam nihitam rajesu pannihitam.” The repetition of the ‘yam’ activates the Anaahaata chakra. Reela, who explained this, said that the lyrics were by her mother, yoga guru Bijoylaxmi Hota. 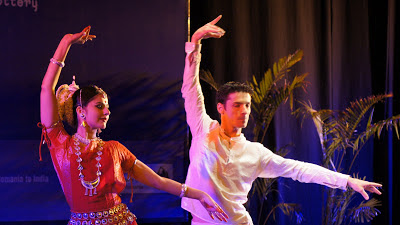 The final piece was a blending of ballet and Odissi, and was about ecstasy and moksha which are attained by the spiritual journey. It is the final stage of evolution of life. Om shashvataye namo namaha, ishwaraye namah, ekyomkaraye shivoham aham brahmasmi – it is what all beings strive for, and this is the destiny of all life in union with the Supreme. The dancers did a great finale with each style at its best. They made it an ethereal experience. The artists were Reela Hota with Lipsa Das, Sudarshan Sahu, Santosh Kumar, Banita Pradhan and Baby Harshini Dhar. The ballet artistes were Canila Bogdan Stefan, Ionete Andra and Djimaru Cristina Alexandra from the Bucharest National Opera House 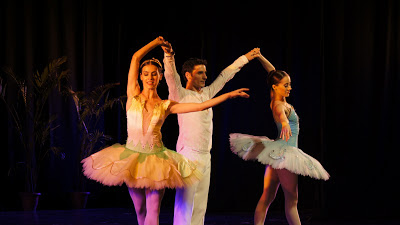