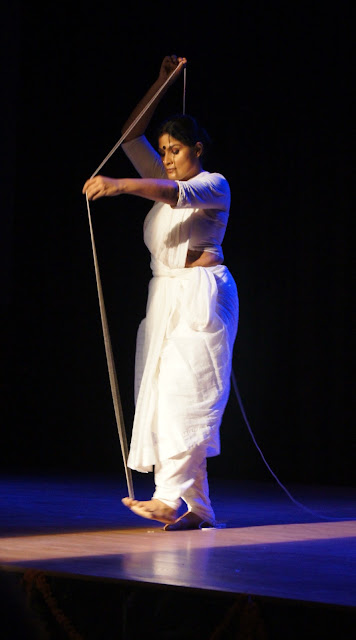 The father of the nation, Mahatma Gandhi, is a much written about and explored personality in Indian history. So, a charpoy on the stage, as a prop with clothes hanging on it, raised your curiosity about how Geeta was going to portray key concepts from Gandhian philosophy.
On August 17th, bharatnatyam dancer Padmashree Geeta Chandran premiered her new abstract dance composition, ‘Gandhi – Warp and Weft’ at the newly opened JNU Convention Centre. The performance depicted Gandhi’s ideology through narrated gestures. It incorporated both, classical bharatnatyam and contemporary theatre. About the concept and its visualization, Geeta had said, “This is not a docu-drama or anything. It is very much a contemporary Indian woman dancer revisiting the vision of Gandhi. In that sense it is me and Gandhi. It meant a lot of reading, and there was so much information that the task of developing the concept was daunting. How to begin? How to take it forward? What medium to use? Gandhi is not somebody that you can portray in an hour. I wanted to say so much more and that is why there is so much layering. And then the ideologies had to be communicated with conviction. We narrowed down to six segments from his life. To portray them, we made use of props and a musical score. As we went on, concepts kept evolving. We wanted to make talking about things like scavenging and caste relevant to the present times as well. We are using 21st century bharatnatyam to talk about these issues, so we cannot portray them to be historical subjects. I wanted to make it as much a commentary today as it was for Gandhi’s time.” 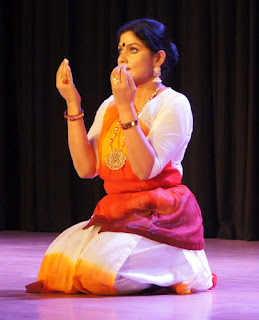 The first segment was about religion and secularism. Gandhi, though a devout Hindu, had total respect for all religions. To portray this, Geeta started by enacting a puja, making chandan, garland and arti. Then came a bhajan which resonated the mood, ‘Ram Ram Jai Raja Ram, Ram Ram Jai Sita Ram’, revisiting the various incidents in the life of Lord Rama. And then suddenly you heard the sound of Quran being recited. Geeta enacted this piece by opening different windows with different chants coming from each. The following song - ‘Jo khuda masjid basat hai’ – conveyed the secular message. The concluding line – ‘Dil hi mein basat, so guru peer hamara’- summed it up. 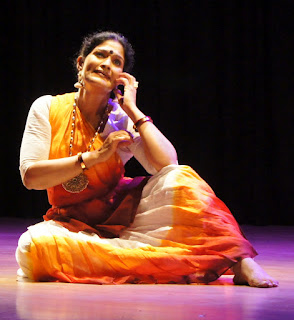 The second section took us to Gandhi’s experiments with celibacy and renunciation. Geeta chose to portray this by using ‘shringar rasa’ initially. The coy bride is thinking of her lover, of the romance and the embrace. ‘Piya ki nazariya jadoo bhari, moh liyo mann mero prem bhari’. But during the actual ‘milan’ or embrace, she gets pangs of ‘virakti’ or detachment. She comes to her lover and turns around again and again. This is where Geeta did a costume change. She was wearing a white dress with a red and orange border. She changed into a white costume with blue and grey border and took off her ornaments. The costume change obviously symbolizing the shunning of passion. Celibacy is an abstract concept and Geeta used a cloth tied to both her wrists, the tying and untying movement showing the turmoil within: and the stretching denoting testing of one’s will power to abstain. Subsequently she went on to show Gandhi’s puritan lifestyle of reading and writing from the prison. 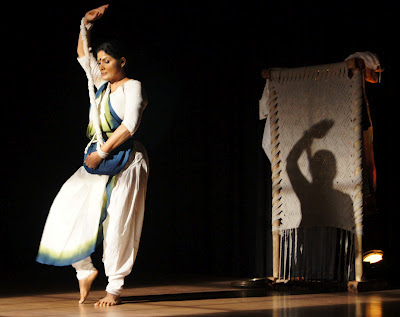 The third theme of the choreography engages with epochal protests and movements like the dandi march. Geeta depicted people of all ages and types walking for the march with a resolve and then being beaten up. It was an old lady or a mother with a child or a young man with the fire to fight in him, walking up and then being pushed away. The next aspect of ideology that was explored was ‘Ahimsa’. The background notes were given by Geeta herself. The dance involved movements of being jostled, manhandled and turning the other cheek as a mark of non-violence. ‘Satyagraha’ was shown by overturned plates. Geeta would sit in front of the plate, turn it over, grip her stomach and roll over. 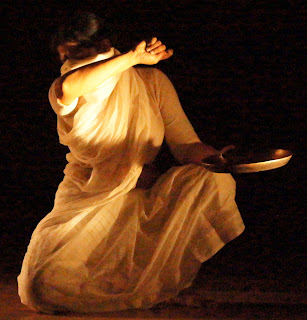 The fifth section of the dance looks at caste and ‘shram’. For this section, Geeta changed her costume and wore a completely white dress, showing utter poverty. She swept the floor as if cleaning night soil and carrying it on her head. The extracts from different documentaries resonated in the auditorium urging for reforms for the dalits. 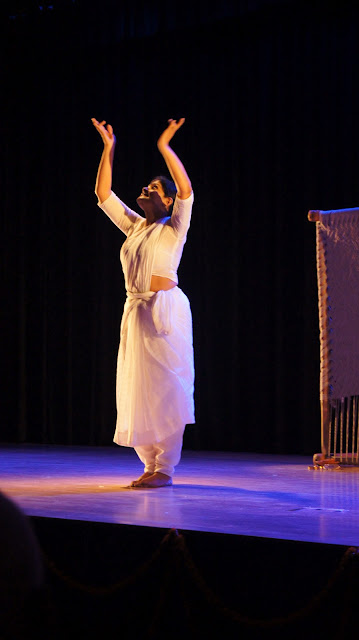 In the concluding section, Geeta emphasized the use of spinning khadi and cloth making processes as a metaphor for ecological sustainability. Gandhi used khadi as a weapon to shun the import of cloth and promoting self-sufficiency within the nation. Geeta portrayed seeds sown, plants bearing flowers and then the yarn being spun on the ‘charkha’. This yarn became the bond that united the whole country. And then came the part that hit you the hardest. Geeta kept stepping on the yarn drawing a line symbolizing the division of India. It was a big dilemma for Gandhi, who did not know where to put his feet. Then Geeta tied the yarn to her toes as in death, before portraying the shot that killed him. The last scene is Geeta sitting and pondering, and then she lights a ‘diya’. The ‘diya’ symbolized the flickering hope that Gandhi’s ideology still provides in the 21st century independent India.

Said Geeta, “In the last part, where a line is drawn to show the partition and Gandhi’s dilemma, we wanted the audience to catch on themselves. We did not explain it beforehand. The aam janta is very intelligent. They do not need any spoonfeeding. Some people are very fond of drawing lines. Like this is bharatnatyam. Like this is theatre. This is contemporary. I did not want to draw any lines on what has to be used where as long as the message is conveyed. I did not want to use too many props either. I am a person who tries to convey more through movement and dance. But still I did not draw any rigid lines. The plates were used to show satyagraha. We wanted to use yarn as a prop since it is associated with Gandhi.”

The sound score by Pratik Biswas featuring Ojesh Pratap Singh, K Venkateshwaran, Thanjavoor Keshavan and Geeta Chandran was commendable. The costumes were designed by Sandhya Raman. Deepa Dharmadhikari co-choreographed the performance with Geeta and also did the lighting design.

About the difficulty of doing this production, a novelty and a departure from her usual work, Geeta said, “Soundscapes also took up a lot of energy. At places we have used natural sounds. Different segments were recorded separately. For the scavenging part, we wanted the vocals to be more powerful and prominent. We watched 60 to 70 documentaries and went through the tedious task of picking up content that conveyed the message. We kept movement to a minimum. It was an effort to bring out the drudgery and not divert the audience from that. Next, it was the issue of costume change. We thought that going off the stage would take away the element of continuity. Then we thought we would do it on the stage with a sense of purpose. But that seemed too much for the sensibilities of Indian audience. We had to put something that would that would provide a cover for the costume change. The options were a Gandhi sketch or something made of bamboo or a charpoy. The last one was our choice since it was minimalist." I think the charpoy represented the theme warp and weft.

When asked which ideology resonated the most with her, she said, “It was very disturbing to watch documentaries on manual scavenging. I threw up a few times and could not eat for a day or two when we were researching and rehearsing. It is a totally inhuman practice which should be discontinued in the so called ‘modern’ India. Even amongst the dalits, it is the lowest of them who are working as scavengers. People who can make a difference are not ready to do anything about it.”