Mandalas on World Environment Day by kids at SMS 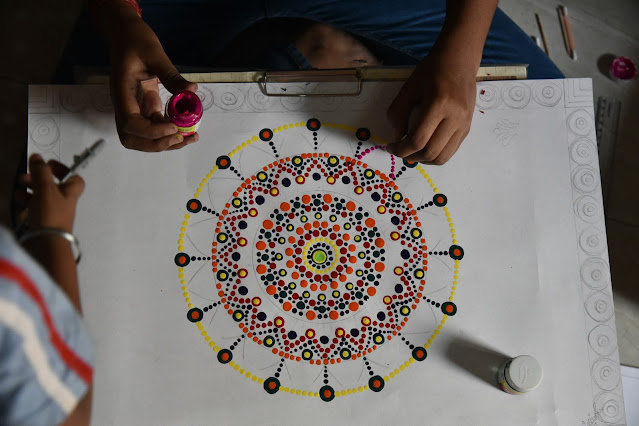 The festive season is approaching and in the midst of all the festive spending, one of the things to put a little bit aside for is making a difference in the world. I am a great admirer of the work that Delhi's Srijanatmak Manushi Sanstha does.

This is a small organization founded by two friends, Archana Kaul and Neelam Thapliyal, in Delhi, and for years they have been teaching arts and crafts to the children in the slum opposite their home. Their single room in the slum provides a safe haven from the difficult and sometimes dangerous lives these children lead.

I last met them when my husband and I visited the centre on World Environment Day earlier this year. Neelam had the children work on drawing mandalas. Mandalas are circular drawings that represent different things in different contexts. They are employed in both Hinduism and Buddhism to represent sometimes the universe, sometimes deities and their worship, sometimes various energies. They are used to help with concentration during meditation in Buddhism.

I had been wanting to meet the SMS girls for some time by then. Luckily, Neelam was holding a workshop for the children on Environment Day and invited me over. Archana Kaul has described, in her article in Narthaki, how she has been working with these girls from the slums near her house. Neelam and Archana have always inspired me with their work. Archana teaches them dance and Neelam does the work on arts and crafts; she teaches them productive skills which also help them earn a bit of money. I have always looked up to the two of them and the way they have groomed these children over the years to become better people.

This time, Neelam held a workshop for mandalas and this particular day was a part of the larger project that she wanted to do with the children. When I asked Neelam about this project, she explained that mandalas were fascinating and were said to help calm and focus the mind. The children saw so much violence in their homes and neighbourhoods, and often also suffered violence and abuse, so she wanted them to work on the mandalas so that they could be engaged in something calming that would also allow them to express their creativity. She said she also wanted the kids to make things that were productive and useful with the mandalas later perhaps.

It really was amazing to see the enthusiasm among the kids — from the younger ones to the elder ones, they all drew mandalas using various media like watercolours, pens etc. The younger ones made simple circles divided into segments while the older ones used sketch pens, dots of paint and even bindis to make inventive and stunning mandalas painstakingly.