On 19 June at the Kamani auditorium in Delhi, Dr. Sonal Mansingh's Kamakhya Kalapeeth Centre for Indian Classical Dances presented 'Nrtya Veerangana-The indomitable women of dance.' People often forget the pioneers who have made great contributions to their field. But at some point, it becomes necessary to pay tribute to them and learn more about their lives in order to enrich our own life lessons. These women, to whom the production paid an ode that day, were indomitable, iconic figures in the world of dance history.

Dr. Mansingh was herself the narrator or sutradhar. Her storytelling has always been very convincing and forceful. With her words and oratory skills, she builds the right mood for the performance and grabs the audience's attention even before the performance starts. The last three centuries saw many socio-cultural prejudices against women in general and artists in particular.

The first person to be portrayed was Muddupalani, by the disciples of Vanashree Rao in Kuchipudi. She was a Telugu poet and a devadasi who lived probably from 1739 to 1763 in the Thanjavur kingdom. She was a poet and a litterateur who rebelled against the conservatism of the society at that time. Krishna, as the story says, came to her in her dream and told her to write poetry about him, about his leelas in Vrindavan and his dalliance with Radha. This love poetry created a lot of controversy because of its explicit imagery.

Sonal Mansingh wore an orange-yellow sari for the production and the dancers themselves were dressed in colourful costumes. The makeup and aharyam for the dancer portraying Krishna stood out. Radha, in the poem, is shown to be an older relative of Krishna and she marries him to Ila. Ila is younger and more beautiful. Radha dresses her in her ornaments and odhni and Krishna then comes to take his young wife with him. And yet he looks back at Radha with love in his eyes. Later, Radha feels the pangs of separation and jealousy. Ayana as Radha lies on the raised platform, saddened and in pain. Krishna gets all dressed up in his pitambar, wears his sandal paste and kumkum, and comes looking for Radha. To get the attention of the moping Radha, he makes a sound with his ghungroos and gets a flower for her. And yet, she rejects him. He praises her and she shows disbelief. As visuals of a temple were shown in the background, Radha, in her anguish, breaks the flowers in the toran and those adorning her hair. Krishna still tries to appease her and explain and when nothing works, he puts her left foot on his head. It was a moving act that the two dancers performed. He presses her feet and apologizes. As Krishna puts her feet to his eyes and head, she lovingly touches his head. The two have a dalliance and sit together on a swing and as the sakhis join in, they play the raasleela. The dancers all get together to dance the raas and the two lovers sleep together.

Krishna then leaves a sleeping Radha and places his feather next to her. The costumes were brightly coloured and Krishna's makeup and costuming were very apt. Vanashree Rao later said that he was a new dancer and had recently joined her. Ayana as Radha and Moumita as Ila were very attractive. They are both seasoned dancers and the abhinaya came very naturally to them. 'Radhika Santvanam' or the appeasement of Radha is a pathbreaking poetry since it refers to the goddess being appeased by the god, who then goes on to touch her feet and ask for forgiveness.

The second historical figure who was portrayed was Thatri from Kerala. Sonal Mansingh wore a white saree, as did the dancers, which is typical of the Mohiniattam aharyam. Thatri lived in the 18th-19th century and she belonged to the prominent Namboodiri clan. She was keen to pursue her education in literature and the performing arts. But that was not to be so since she was married at a very young age to a much older man. The Brahmin women were subjected to the malpractice of purdah. She was supposed to carry a bamboo umbrella and cover herself whenever she ventured out.

Thatri was fond of dancing and singing but it was strictly prohibited. And as Mansingh put it, she was a swachhand (free-spirited), kalpanasheel (imaginative) and kalapremi (artistic/art loving) person and broke the shackles of misogyny. She dared to have an affair and love a Kathakali dancer, following which she was subjected to a trial by the Brahmins and all guilt was laid at her door. However, she goes on to prove that many of them who were sitting in judgement on her had visited her for their lust and none of them could be given a clean chit. Subsequently, they were excommunicated. She was a rebel and a pathbreaker.

To portray Thatri, the dancer chosen was Neena Prasad and her troupe in Mohiniattam. Neena Prasad chose to portray Thatri by acting out her life story. Thatri was shown to be a playful girl, bathing with her friends and playing with them as the other women scamper along, holding umbrellas. But she faces molestation by men even at a young age and was married off to an older man. The rebel in her was shown by her reaction to the unwanted advances and she totally rejects the superiority of men.

She learns Kathakali from a teacher and has an affair with him. He took good care of her and his genuine attachment lights the light of love in her life. The gentle holding of hands and love provokes such feelings within her that she feels good about herself. But as the rumours fly, she is brought to a court of Brahmins and the image of a kulvadhu (bride or daughter-in-law in a high-caste or prominent/'respectable' family) is tarnished. She faces them with self-pride and accuses all the Brahmins who had forced themselves on her. She challenges the male dominance.

Neena Prasad as Thatri stands alone on the pedestal holding an umbrella as praises are sung for her. She and her dancers very sensitively portrayed the entire life of Thatri; the abhinaya was sensitive and the storytelling forceful. Though the natya element in the piece was predominant, the nritta could be seen in certain interludes. The footwork was remarkable, with the swaying movements, especially as they kicked their feet.


To introduce Madame Menaka or Leela Roy Sokhey, a choreographer and Kathak revivalist, Sonal Mansingh wore a magenta silk sari. Born in East Bengal, Leela Roy (1899-1946) had a Bengali father and a British mother. She learnt violin in England and it was during one of her performances that she met Anna Pavlova, the famous ballerina. Menaka learnt ballet as well. Pavlova encouraged her to learn Indian dance and it was the famous Uday Shankar who was with her, who was also influenced by Pavlova's words. Uday Shankar was a painter then. Thus it was that they went back to their roots.
.

Her Kathak teacher was Pt. Sitaram Prasad and Achchan Maharaj, and she was befriended by Baroda's Indira Raje. Menaka and her troupe entered the Berlin Dance Olympiad. Madame Menaka was her title and she learnt nautch. Her husband, Col. Sokhey, was very supportive and helped her open a residential school in Khandala for dance. All the aspects and aesthetics of dance were taken care of there - dance, music, costuming, make-up etc. Her adopted daughter and disciple was Damayanti Joshi. Madame Menaka brought respectability to Kathak as she renamed nautch as a storytelling technique.

The piece on her was performed by Vaswati Misra and her troupe in Kathak. It began with projections of nautch girls dancing to a song, 'Phool gendawa na maro', and during the dancing there was hooting and thumping. 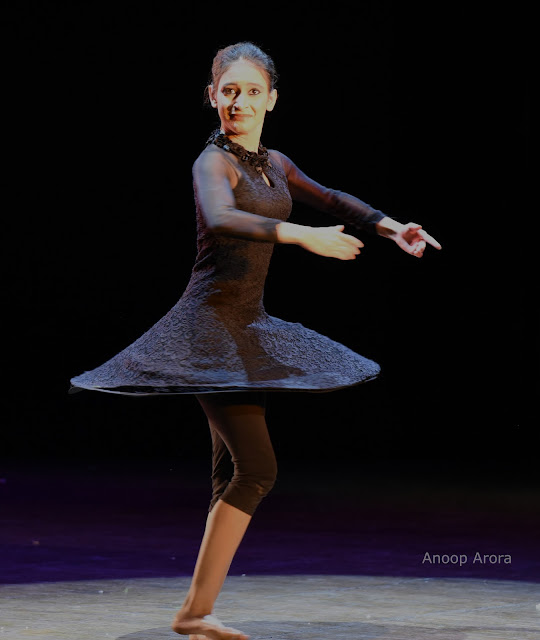 After some time, it was Pavlova who she performed with. Anna Pavlova was enacted by a dancer who was technically very good in ballet dancing, and she persuades Menaka and Uday Shankar to return to India. Menaka danced with Uday for various productions as Shiva and Parvati and in other productions, stills from which were shown on the screen behind them.

The group of dancers were technically very sound. The dancer who portrayed Madame Menaka looked quite a bit like her and the dancer portraying Anna was very agile and showed immense energy.

The last personage whose story was portrayed was the eminent Rukmini Devi Arundale. She was born in Madurai in 1904 and was known for her prowess in Bharatanatyam. Born in a Brahmin family, she was the first woman to be nominated as a member of Rajya Sabha and to her credit she has the Sangeet Natak Akademi Award and the Padma Bhushan. She was the revivalist of Bharatanatyam and the founder of the famous Kalakshetra, a pioneering dance school in Chennai. She was the one who brought about a sea change in Indian classical dance in India. She too met Anna Pavlova on a trip to Australia, and Pavlova told her also to go back to India.

Her story was depicted by P.T. Narendran and his troupe in Bharatanatyam. The dancers came on to the stage carrying an idol in a palanquin. Their dresses were very bright and attractive and they wore garlands. They are looked down upon by the commoners.

And then Rukmini Devi comes into the picture to teach them the better version of their dance. This dancer was dressed in a sari worn in the way that Rukmini Devi wore it. She gives them dance lessons as she dances herself. The carriage of this dancer was very similar to Rukmini Devi - to look like another person is actually quite tough. Her looks were gentle and her mannerisms subtle. It is a challenge to portray a person who has had a life larger than life. She was shown to persuade her guru Pandanallur Meenakshi Sundaram Pillai, who had refused to teach her earlier, to be her guru in Bharatanatyam. 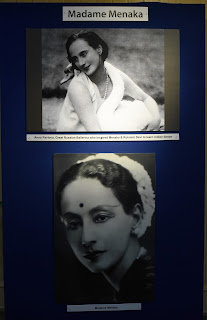 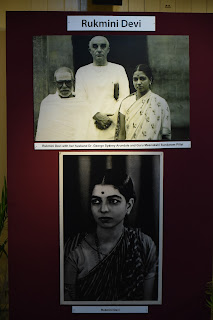 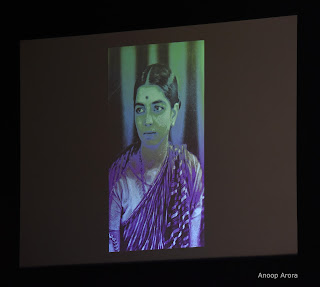 As the evening came to an end, the viewers enjoyed the photo exhibition dedicated to the four veeranganas and the four gurus in the foyer of Kamani auditorium.