During the past two and a half years, dance and the idea of performance art have both seen a stupendous evolution. Pre-pandemic, there were mostly live shows, mostly with live musicians on stage or recorded music. Some dancers would occasionally post videos, but it wasn’t considered ‘serious’ dancing. But then, during the various waves and lockdowns, classical dancers braced themselves and started posting video clips. And those short clips grew into ‘proper’ 45-minute to one-hour performances. The expertise and the know-how for shooting and editing videos has become a necessary skill that almost everyone has had to learn.

An online event called ‘Natyavamsham: of legacy, transference and sharing’ was organized by G.V. Ramani Natya Kala Foundation in March. Mother and daughter duo Geeta and Sharanya Chandran gave one such virtuoso video performance together, reinventing and revisiting their classical Bharatanatyam expertise. Geetaji elaborated on the significance of the title ‘legacy, transference and sharing’, which she said are all dynamic phenomena. She said she was one among perhaps the last generation of dancers who had learnt from a non-performing guru, who could tweak the choreography according to the dancer and allow them to find their own style. But today, a piece that a guru has already performed many times and set a template for is difficult to tweak and rework. Both methods have their own distinct advantages and disadvantages, she said, when it comes to teaching and learning. One has to give that freedom to a student to learn and then construct it according to their own requirements. The student needs to imbibe dance by looking and making it their own. So it is a difference of pedagogy. Legacy is a process coming out of engagement with your students, she said: ‘I want my students to be creative and learn from experience.’ 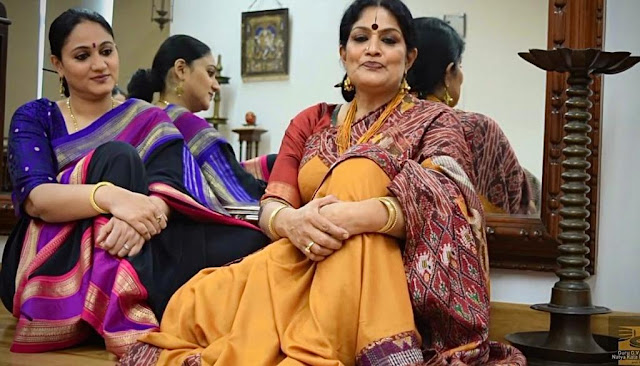 Sharanya, her daughter and disciple, talked about what they have been doing with the music. The first piece they presented was a nirgeet, which is unusual pure musical notes without any mythology or text. It is about how the body responds to the rhythm. The choreography for all the pieces was by the mother-daughter dancer pair. For this piece, the nattuvangam was by Sharanya, vocals by K. Venkateshwaran, Dr. S. Vasudevan and Radhika Kathal, mridangam and kanjira by R. Sriganesh, violin by G. Raghavendra Prasath and flute by Rajat Prasanna. 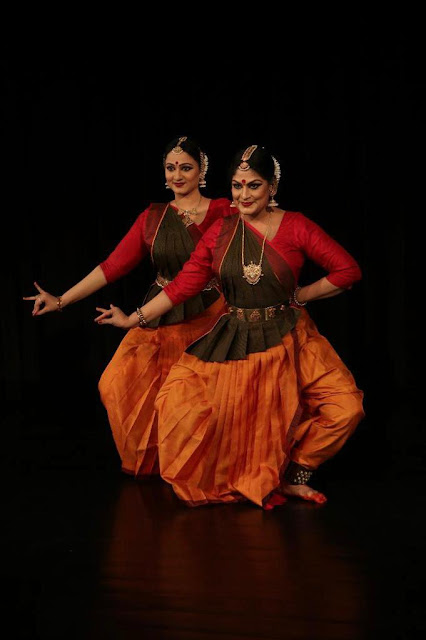 The stage was stark and dark. The costume was a burst of colour with red and orange and brown pleats on the shoulder. Credits The video started with the duo moving and taking their adavus to slow, rhythmic bols called the pancham swaritam nadam. Their hands and feet moved precisely in perfect sync as they moved together in the same or opposite directions. It was a pleasure to watch them together in a perfect understanding. It was not clear whether the daughter matches up to the mother or vice versa. The music and the rhythm builds within the dancers as they enjoy the naad and the rhythm, and the dancing builds within the audience as they feel the anand.

Before the next piece, Sharanya spoke eloquently about her learning process at Natya Vriksha under her mother. Rhythm or kanak, she said, was one of her favourite things of all that she had learnt under her mother, including both Bharatanatyam and the allied arts. It used be math on the mat, she said. Geetaji is a trained Carnatic singer and would always sing during class. Sharanya elaborated how Geetaji tweaks a choreography to suit the student’s body and strengths; she would choreograph differently for Sharanya and differently for herself. Both the guru and shishya have to be equally responsive. Sharanya also spoke with awe about watching her mother dance. It is an experience in adbhutam, she said, how she becomes every character she plays, how she reacts to the cadence of the music. And then in the abhinaya, the manodharma comes into play. And lastly is the fun, where she is treated equally in shared choreographies. Her inputs count and may be incorporated.

Next, they performed ‘Natanam Adinar’. Geetaji said she learnt the padam from her first guru, Swarna Saraswathy, and has visited it quite often. ‘I was nine then,’ she said. ‘There was less of rhythm and more of abhinaya. And of course, the joy of Shiva dancing was there. It changed over the years with other gurus and finally with Karaikudi Sivakumar, it became more rhythm-oriented. While working with Sharanya, we incorporated the structured and unstructured, soulful and technical.’

They wore red sarees and green blouses. Sharanya stared the piece showing the path, the pillars, the door, the toran of the garbhagriha and Nandi sitting outside. Geetaji was the bhakta who looks on in wonderment. The interlude with nritta and bols was mesmerizing. The due performed the same steps alternately to the same rhythm, that is, standing together or opposite and doing their steps one behind the other, moving their hands in the mudra of the snake. Again, Sharanya was the dancing Shiva and Geetaji was the awestruck bhakta in the refrain, raising opposite hands and moving in opposite directions. They performed different gestures to the same lyrics – one playing damru, the other listening, one listening to the ghunghroos of Shiva, the other taking tandava stances. Showing damru, chandra, jata, Nandi and Ganga separately, moving back and forth, they depicted aesthetic interpretations. They moved back and forth, the one behind depicting the Kailash parvat or other attributes of Shiva, and the one in front doing aarti and vandana. One of the awesome postures was Geetaji in front, depicting the jata, and Sharanya behind, doing the hastas for snakes. Another incredible stance was Geetaji in front, showing the flowing locks, and Sharanya behind, showing Ganga. They depicted the eight directions swaying, the earth shuddering, the snakes moving and the Ganga being scattered hither-thither by the cosmic dance. Facing each other and back to front, they took other interesting stances after an interlude of nritta.

For this piece, the nattuvangam was by Geetaji, vocals by K. Venkateshwaran, mridangam by R. Sriganesh and violin by C.S. Anuroop, with rhythmic inputs by Karaikudi Sivakumar 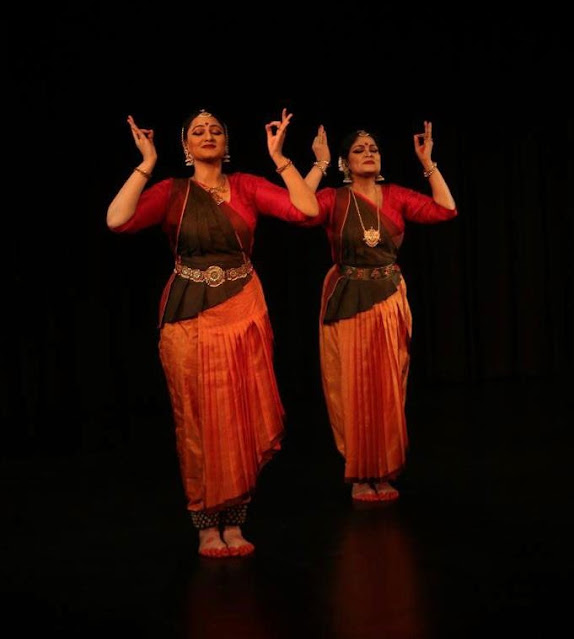 What an experience it was to watch the duo. Geetaji has been taking flawless balancing stances ever since I have started watching her. Her expressions of bhava and those of epiphanic moments can always melt your heart. And Sharanya is turning out to be a dancer of very high calibre. She has totally mastered the technique and her flawless, expansive movements are very exact and sharp.

The next and final piece was about varsha ritu or rain, taken from Kalidasa’s Ritusamhara. Geetaji said that she worked with Dr. Vasanthi Rao for the music and then they used tanams to elaborate on the poetry. They rechoreographed it for the festival Ananya (http://delhiculturecomment.blogspot.com/2011/11/varsha-by-geeta-chandran.html) as a group and recorded the music with Dr. Sudha Raghuraman. Sharanya and Geetaji talked about matching each other’s energies and improvizations. They said they enjoyed working on the piece together with inputs from both. 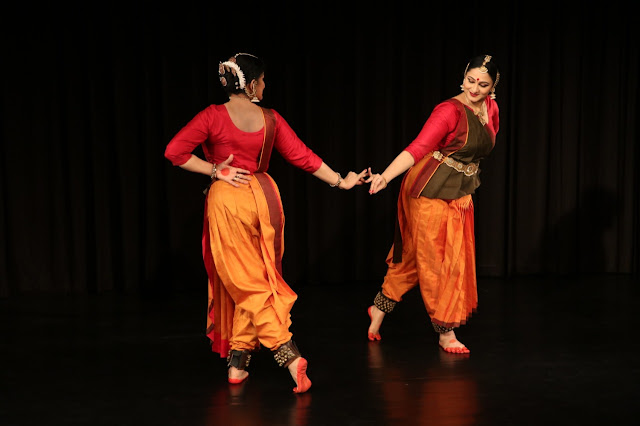 In the piece, drums provided the sound of thunder. The nayika is sweating and panting in the heat. She listens to the thunder, which sounds like wild intoxicated elephants crashing through the forest. And then, Sharanya depicted holding mridangam and Geetaji a single side of a drum. The lightning is like the flags announcing the procession. The sound is deafening. Sharanya moved with the expansive gait of an elephant swaying along. The lightning is like a princely lady striding forth, covered from head to toe in ornaments. Commoners going about their chores stop to look at her. The clouds are loved by lovers. The two of them stood on two levels to do their own interpretations. The entire creation is enchanted – flowers blooming, lotuses in ponds opening, the animals frolicking. What an elaborate peacock dance they did, using various moves and stances. When the raindrops fall on them, they enjoy and play with the little water that has accumulated. And then the water starts to come down with force. The clouds darken and the nayika locks herself inside as she is frightened by the noise of the thunder. She is hesitant, but cannot avoid embracing the nayak as the thundering continues. They light a lamp and enter the bedchamber in a tight embrace. The nayika hides in her ghunghat and blows the light out.

For this piece, they wore red and blue sarees. A lamp could be seen on the stage. All the pieces they did prove that the understanding and coordination between dancers in a duet does not necessarily reduce creative freedom. They may choose to dance together with immaculate technique and at the same time, do some meticulous abhinaya, explaining every nuance of a piece, like this one, in their own way. The Ritusamhara piece was done very well. Compliments also to the accompanying artists who put in their best to enhance the piece. The lyrics by the poet, sung and musically accompanied so aesthetically, and the dancers translating them into dance, became a sojourn to another realm. For this composition, the music composition was by Dr. Vasanthi Krishna Rao, nattuvangam by Geetaji, vocals by Sudha Raghuraman, mridangam by R. Sriganesh and flute by G. Raghuraman. The mother-daughter duo were exemplary in their transference, legacy and sharing.