ONLINE: Dancers adapt to the camera in Devi Diaries 2 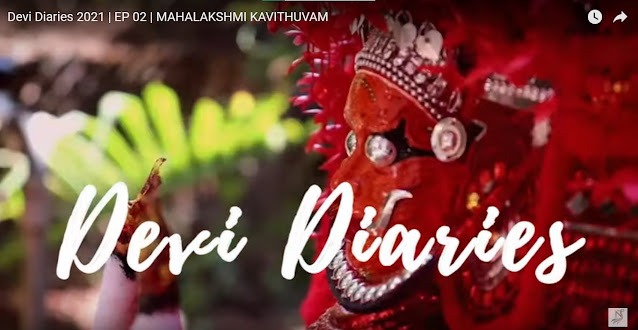 The month of Ashwin is auspicious for the puja of the devi: ‘Yatra nari poojayante tatra devati tishthati’. Anita R. Ratnam had produced ‘Devi Diaries’ on Narthaki Official last year, and many rasikas and dancers were waiting for it this year too, as the art of documenting dance in videos has evolved over the course of the pandemic.

As I got the first few visuals of the episodes, what struck me right away were the visuals which Surya N. Rao has put up in the beginning, as the introduction. The music at the end of each video is also very catchy.

In a short chat, Surya told me that the images in the beginning are from South India, and he sourced them from his friends. He said he found them interesting and appropriate to the theme. There are also clips of the aarti of Attukal Bhagawati and also images from Kolkata of the making of Durga Puja idols. Together, they all add mystique and colour to the videos. Surya added that he kept the videos to less than 10 minutes since that was the attention span most people could devote. Within those 10 minutes, he said, he had to fit the intro for the dance, the execution and the details and credits. The end also had to be equally vibrant. The music at the end is also appropriately mythical. Being a Bharatanatyam and Kuchipudi dancer himself, he said, he found it easy to formulate the music. Anita Ratnam’s vision was to keep it tight and short, and that is why it was called Devi ‘diaries’.

What finally unfolded was a collage of several dancers from all over the country, with various flavours of language, dialect, style and form to enjoy. For me, the auspiciousness and the piety of the month was enhanced by the earnest and skilled videos. Writing about them is going to be a tough task, but I am going to attempt it but by breaking it up into small instalments.

Awasthy V. Nair, Mohiniyattam: The composition was about Bhagawathi devi of Thiruvattatukavu of Attingal, a temple in Kerala. The visuals of tribal worship in the beginning evoked intrigue. Anita Ratnam introduced the series as the celebration of womanhood. The backdrop featured a beautiful temple with serene surroundings. 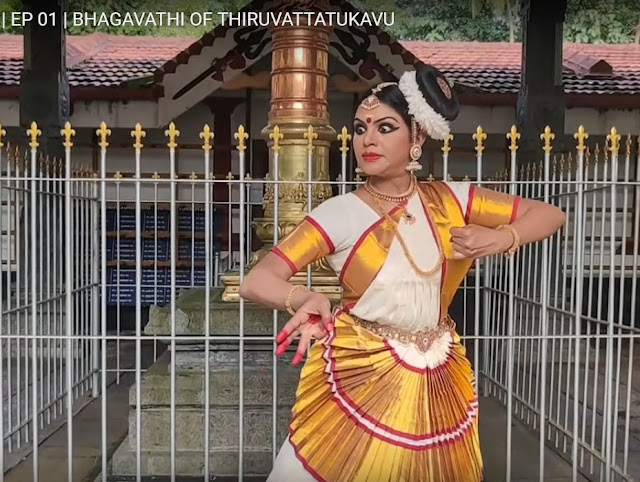 The style and aharyam were for Mohiniyattam. The choreography also evoked serenity and saukhyam, through the gentle swaying movements of Mohiniyattam. The video and the editing were worthy of praise. The dancer was Awasthy V. Nair. The composition was in ragam Todi, talam chembuda. The language was Malayalam.

Kavya Muralidharan, Bharatnatyam: She presented the Mahalakshami Kavithuvam in ragam Sree, talam sankeerna roopam, in Tamil, composed and choreographed by Guru Muralidharan. The video started with the same visuals of devi pooja from Kerala. For this video, the dancer picked a spot near a rivulet. 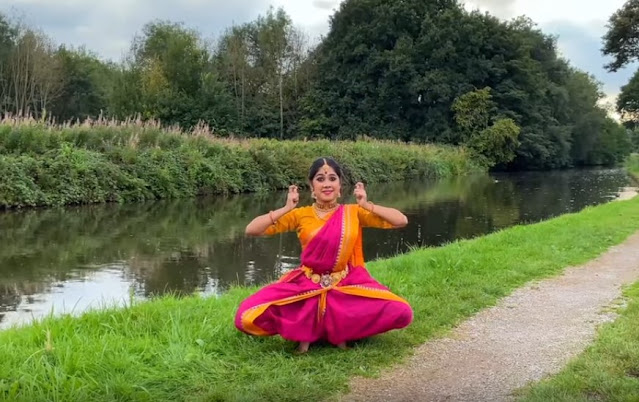 The aharyam was in very subtle red and yellow. The lyrics were in praise of the goddess, ‘Mahalakshmi Namastute’. The nritta was done on soft mud and grass with a lot of precision and dexterity. The video was very neatly done.

Madhulita Mohapatra, Odissi: The goddess featured here was Ishwari. The video started, as before, with the mystical visuals. The composition eulogized the goddess in three forms – Ma Manikeshwari from the western part of Odisha, Ma Chamundeshwari and Ma Durgeshwari. The music had Sambalpuri folk elements; the languages were Odiya and Sanskrit. The video was shot in a hilly area. The aharyam was red and yellow, with a folk flavour. The clever videography made it look as if the dancer was emerging from the hills to the hulu dhwani.

The rest of the dancers followed in formations in a 10-armed formation in good coordination. Chamundeshwari was shown as riding the lion, beheading the demon and drinking his blood. The vision of the lion moving regally and the goddess mounting was creating very well by the group on the plateaued surface. The formation for the shashi mukut was also eye catching, followed by a fight with the demon. In the culmination, to the lyrics of ‘Iishwari parmeshwari’, the scattered clouds in the sky created a magic beyond words. A video to be watched not just for the dance but also for its videography. The nritta and nritya were flawless.

Himanshu Srivastava, Bharatnatyam: The goddess is Shri Radha. The video started with the same visuals, which have remained in my imagination till date. The video was titled ‘Radha… The Divine Ascension’. Radha is the consort of Lord Krishna. She is the daughter of Vrishbhan Rai, the head of Barsana. She is the epitome of beauty, the swamini of the gopis of Vrindavan and the beloved of Lord Krishna. In fact, she is the aatma of the paramatma, the consciousness of the one who resides in our superconsciousness, the super soul. Radha and Krishna are one. They became two to spread the parabhakti or premabhakti. She is the prema shakti or the sakaar shakti of the nirankar, nirakaar brahman. So according to Himanshu, in the first bit, it is the sakhi who is the witness of the sheetal chhavi of Radha and Krishna in the Nidhivan, where Himanshu has shown through his abhinaya how the lata in Nidhivan have entwined with each other through thousands of years. But in the second bit, it is not the sakhi but Krishna who is looking at Radha and sees himself mirrored in her playing the flute and sometimes Radha herself playing with her odhni. In the abhinaya for this portion, he used a yellow patka as a prop to show the playing of flute and odhni. It was very subtle. The nritta jatis were well executed with agility on soft ground. The location was in a very green and open area with many trees. Himanshu wore a magenta dhoti which was very aesthetically styled. He could have used blue for Shri Radha’s nilambar, though. 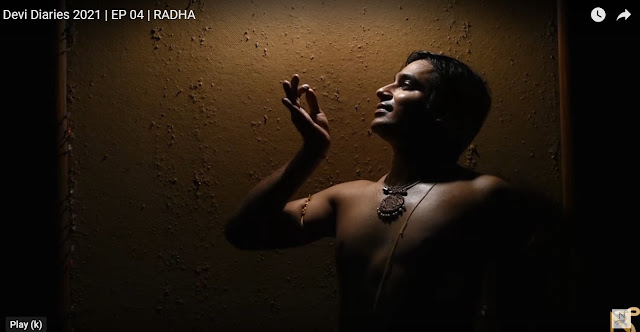 In the last section, the tatva of Shri Radha was shown so tenderly that it produced a surreal experience. The gop-gopis and Krishna are enslaved by the love which is embodied in Shri Radha. And the swaras of the Radha naam sankirtan are so gentle and full of prem that they take you to another level of rasa bhakti. Radha naam permeates the entire vyom. This was indeed an enthralling experience.

Prathama Prasad Rao, Jogathi Nritya: In northern Karnataka, Yallamma devi is worshipped as the goddess of power and abundance. Jogathi is initiated into the seva to serve the goddess and here she dances with ektara. The video started again with the headgear and marble-like eyes boring into you. The backdrop for this was a very scenic area with a small pond and many trees. Prathama wore a blue sari and carried an ektara. Her red hands and feet were prominent. I think there was even an ant hill and a well at the location. Her style of dancing, with jerks and the sound of the been, had a very folksy touch. The sound of ghunghroos added to the music. 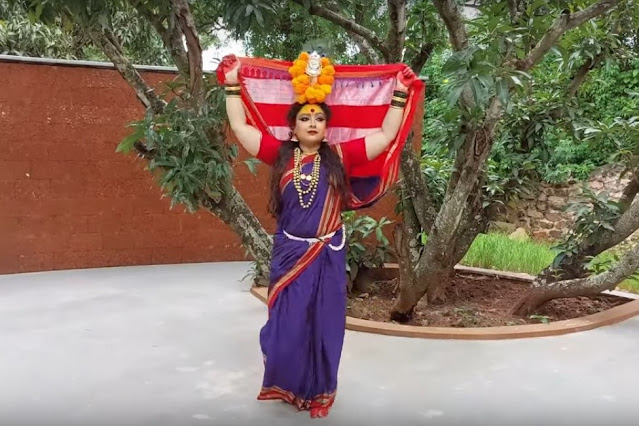 She lifted a bust of the devi to her head and held her red pallu behind it, giving the sense of a procession moving. At the end, as she took chakkars and sprinkled the haldi, the sound of ghunghroos made it more attractive.