A happy and prosperous New Year to all. May the Almighty bless all with health and prosperity.

Vidha Lal’s Sankalp series of Kathak performances recently took a break after its 20th episode. For the 20th episode, Vidha featured Shankari Srinivasan, disciple of Guru Jigyasa Giri of Chennai. Vidha started with a very interesting Kathak antakshari which would test one’s padhant and the creativity among the Kathak dancers.

Shankari trained in Bharatanatyam and nattuvangam before learning Kathak from Jigyasa Giri. Shankari’s guru said that Shankari and her other students represented the ‘dakshini andaaz’ in Kathak. Giri has learnt from teachers belonging to the Banaras and Lucknow gharanas. She very sweetly put Shankari’s coming to her as ‘a bird coming to a window’ and added that her style was an amalgamation of the north and the south styles.

Before we go on to the discussion of the performance, there are a few important things that I would like to highlight about this presentation. Online performances are gradually coming into their own and are not just a temporary substitute for stage performances. Video is a very different creature; a performance that is broadcast online doesn’t have the same impact if you keep dancing as if for a live audience and just record it on your phone. Shankari’s performance was a significant shift because it was not only performed but conceived for video instead of for a physical stage. 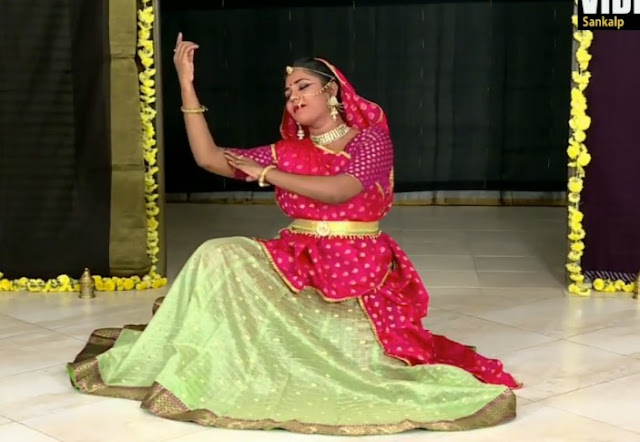 First, the dancer was framed well by her background and used settings and objects in her dance keeping the camera in mind. Second, multiple cameras were used to capture bhava and full-figure dancing separately, and the video was edited to highlight whichever was pradhan at a given moment, alternating between wide-angle shots and zoom-ins. Thirdly, digital effects were used which, once I had seen this, seemed an obvious choice, given that the medium had moved to digital video! And fourthly, Shankari used the freedom from a fixed duration to use costume changes to powerfully underline her theme and subject – again, an obvious choice when the medium is video, but which relatively few dancers have explored well. In all, as I said, the performance was conceived from scratch as a video presentation and intelligently exploited all the modern advantages and tools available on that medium, like close-ups, digital effects, costume changes and creative editing, to enhance the timeless rasa. 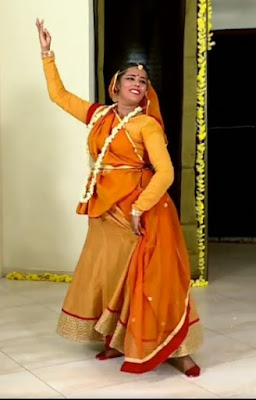 Shankari also experimented with the repertoire of a Kathak presentation. Though she chose the usual routine of a stuti, one abhinaya piece and one technical piece, she worked on making her abhinaya piece into a dramatic video presentation which, within that short span, showed the entire journey and evolution of bhakt Meera. She used her nritta, nritya and bhava to bring out the natya element in the production. 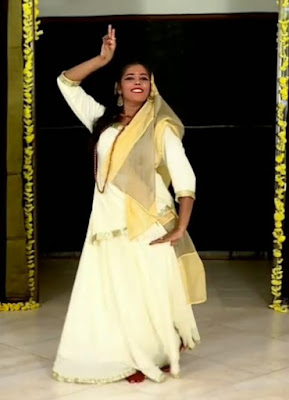 In the first piece, Shankari began seated on the floor with her lehenga spread out around her. She offered a dhyana shlokam. The vocals were very melodious. The second piece in the production was on Meera. In this piece, she used the change of costumes or aharyam to portray the various phases of Meera’s evolution, from a devotee to renunciation to enlightenment, using video editing to segue from one costume or phase to the other seamlessly. The piece began with an image projected digitally on to the entryway before Shankari entered in a red and green costume with a deepak in her hand. She used a statue of Lord Krishna placed on a table in a corner of her stage as part of her presentation. As she plays the iktara, she portrays Meera writing a song, ‘Mere to giridhar gopal’. For the mor mukut, she showed the peacock dance, the rain, chasing the peacock and getting a feather for her Krishna, adorning him, and then an aarti for her lord. For the second stanza, which was ‘santan sang baithi baithi, lok laaj khoi’, the picture switched to her in an orange costume, which denoted her renunciation of the world and embracing the bhakti of her lord. She depicted the stringing of flowers to offer to Krishna and after nritta and chakkars, she embarked on the next stanza on enlightenment in a plain white costume: ‘ansuwan jal seench seench prem bel boi’. The ecstasy of being free of all shackles was shown through chakkars. For the entire piece, the emphasis was not on her nritta sections, but mostly on her bhava. 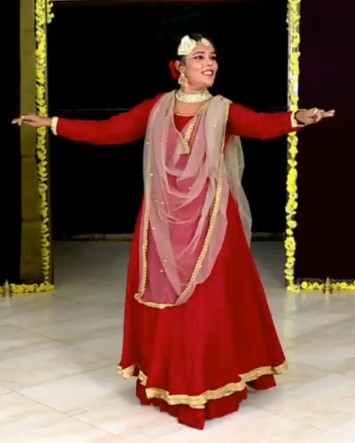 For the last piece, a tarana, she wore a vibrant red costume which presented an attractive contrast after her simple white costume. In her tarana, she exhibited her technique using precise hastas, and lyrical interpretation of rhythm and bols, transforming them into movements, chakkars, leaps and footwork. I just hope that Shankari puts a little more practice into making her arm movements smoother and adding a bit more flair to her technical nritta portion, so that it looks effortless and not rehearsed. In all, her presentation was an engrossing piece of work. You can watch the performance here: https://www.facebook.com/VidhaLalKathak/videos/909064976497767/