Approaching the five-month mark, Vidha Lal presented her 19th episode of Sankalp: The Journey Shall Continue. She started this episode with the doha ‘Bada hua to kya hua, jaise ped khajoor…’, to underline that it is more important to be a good person, less so to be an important one.

The dancers she presented in this episode were Mondira Pal and Sourav Pal, disciples of Sandip Mallick of Kolkata, who in turn has learnt from Guru Sreelekha Mukherjee. Sandip introduced his disciples, saying that Mandira has been learning from him for 18 years, and Sourav for 12. Both are national scholarship holders, and their guru added that they were both integral parts of his institute in Kolkata. 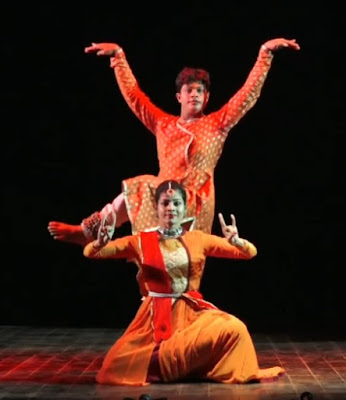 The first piece was a Shankar stuti, 'Damru har har baje', where the attributes of Lord Shiva were brought out through choreography, depicting snakes, damru, trishul and his steed Nandi, in very well-balanced and rehearsed stances and gestures. For this, tabla was by Biplab Bhattacharya, sarangi by Pankal Mishra and vocals by Subhasis Bhattacharya.

For the second section of pure nritta, they presented dhamaar taal dus matra. Beginning with neat, fast chakkars, they performed thaat, taking synchronized, graceful stances. They performed footwork in neat patterns, with aamad, tihais, tukde, ladi and paran, finally ending with chakkars again. They went on to perform teen taal in drut laya. They presented fast tukde with padhant, adding bhavas of saavan to one composition, taking leaps and chakkars. For this, tabla was by Aniruddha Mukherjee, sarod by Sunando Mukherjee and sarangi by Umesh Mishra. 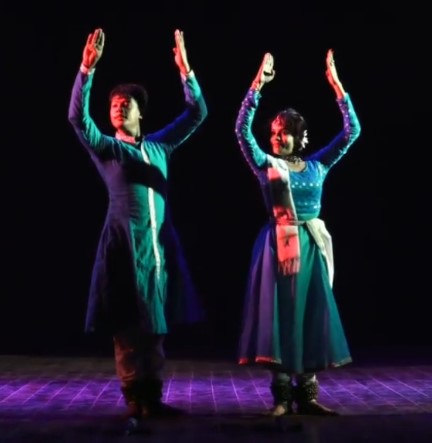 The last piece was a very lyrical composition in Bengali by Rabindranath Tagore, ‘Bahe nirantar ananta anand dhara’. The piece was about the bliss which flows when the paramatma and the jivatma unite. Mondira and Sourav’s movements and choreography were very lyrical, taking stances, moving together or alternately. The piece ended on a very aesthetic note and the same was with the choreography, which was abstract and soulful. 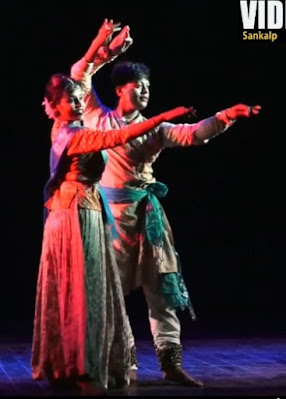 This performance had a few aspects that made it stand out. It was done in an auditorium-like set-up with a stage and lighting, though the lighting could have been a little brighter. The two dancers, Mondira Pal and Sourav Pal, synchronized their movements throughout, which requires a lot of hard work, endless rehearsals and getting into the mind of the other dancer. The final nritya piece was indeed well-chosen and rendered in a very impressive manner. The thing I wish could have been different was Mondira’s costume in the last section, which completely obscured her footwork. For this piece, the vocals were by Subhasis Bhattacharya and tabla by Subir Thakur.