Anindita Acharjee by Drishtikon: Bhava so evocative, it lingers like fragrance

Anindita Acharjee is a Kathak dancer who has a gift for very mature bhava. I saw this young dancer perform in a solo production presented by Dance Drishtikon at Triveni in Delhi. Anindita is a professional Kathak dancer but has restricted herself to teaching for the past few years. She has been teaching for 15 years. She herself trained under Aditi Mangaldas and is one of the senior members of the Drishtikon Dance Foundation – The Aditi Mangaldas Dance Company repertory. She has also learnt from Pt. Jaikishan Maharaj. She has performed all over the world, is an empanelled artist with the ICCR and a recipient of the ‘Shringarmani’ title from the Maharashtra government. 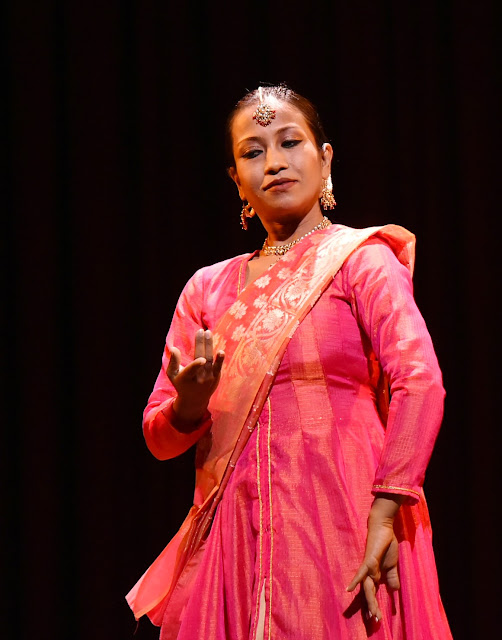 Drishtikon coaxed her out of her teaching sadhana to perform a solo after a long time. The production was called ‘Triya’. As the name ‘Triya’ suggests, three women from our mythology depicted  – Radha, Ahilya and Meera. These three compositions were choreographed by fellow Drishtikon seniors. And finally, Anindita presented the perspective of a woman of today following these three women. A woman has within her many facets, layers and shades, said the production pamphlet. From within her rise the questions – who am I, what am I, am I beautiful, cursed, or free? 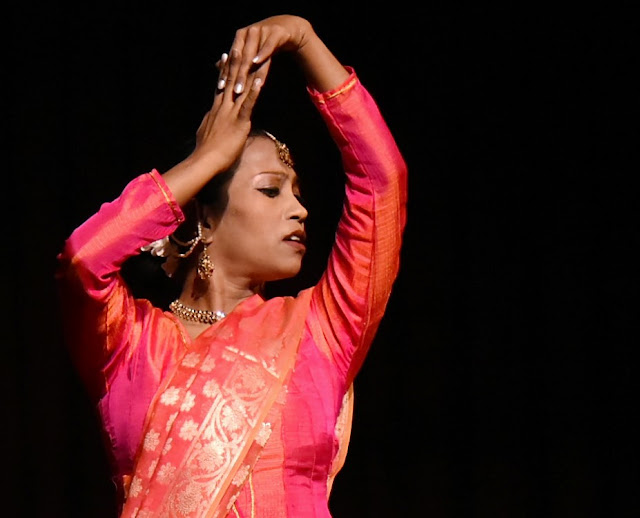 The first piece was ‘Shyama’, choreographed by Gauri Diwakar. Anindita wore a pink and gold costume for this. Beauty is an attribute of the supreme. It is a manifestation of Him. His beauty, or divine beauty, is reflected in worldly beauty, which is just a fragment. The text was from Vidyapati’s ‘Shyama’, which is about the beauty of Radha. 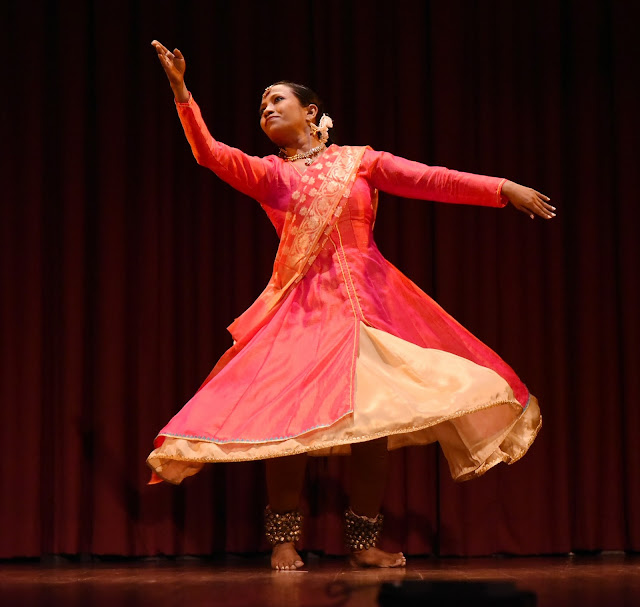 Anindita began by depicting the beauty of Radha – ‘Sees chandrika karna phool besar sundar vasan mridul muskaniya muktan mala kshudra ghantika raajat kinkini bajat kar kankan, sindur.’ The moon is high in the sky when Radha sees herself in the mirror, but finds the image of Krishna in her reflection. 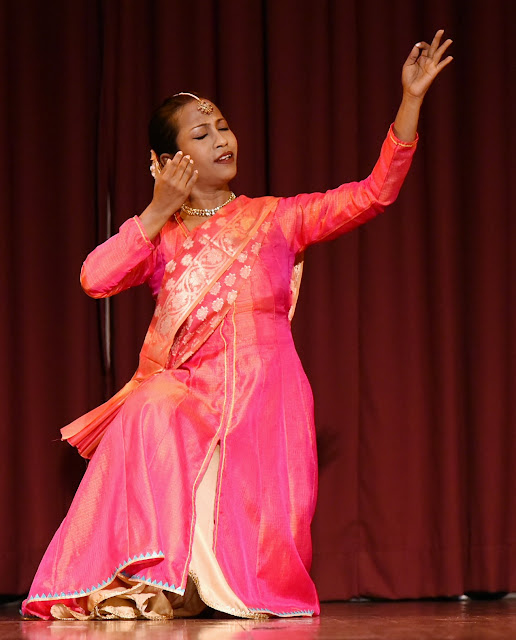 Anindita used gestures and stances to show the beauty of Radha, mixing it with technique like twisting feet, pairon ki uthan, tukde, chand ki gat, aamad etc. with the same grace and delicacy she used in her bhava. For Radha, it is a predicament – since she sees Krishna in herself, how should she treat herself? 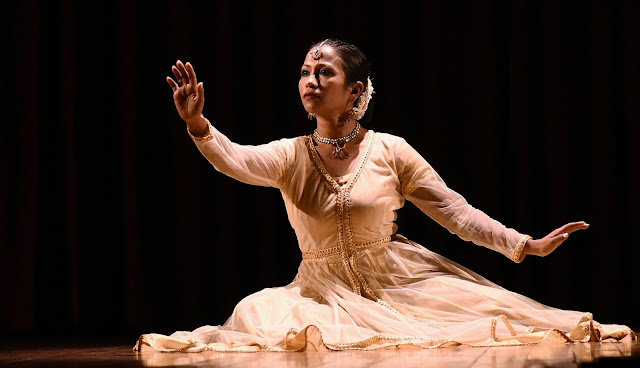 ‘Ahalya’ was the second piece, choreographed by Dheerendra Tiwari. Though the story is oft-visited by dancers, Anindita’s expressiveness gave it a new force, since Anindita is better equipped to emote than many other dancers I’ve seen. Ahilya was cursed by her husband to live as a stone, even though she had been faithful and devoted to him. Here, the question raised was whether a woman has to be pious and of ‘good character’ and integrity. If she ever succumbs to her desires and violates the social norms of a familial system, what are the repercussions she has to suffer? Her penance went to extent of making her totally lifeless – ‘kya ise patthar ki Ahilya banna padega?’ 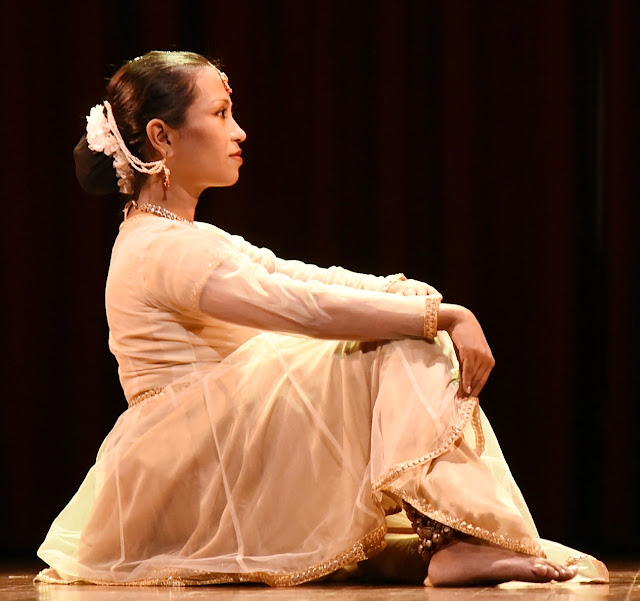 The piece began with the sonorous sound of the flute. The costume here was white and gold, the colour of austerity and purity. The lyrics recited by Dheerendra were ‘nishpran, lahu-luhan astitva se, kyun banna hai mujhe Ahilya, ek Ram ki pratiksha mein?’ 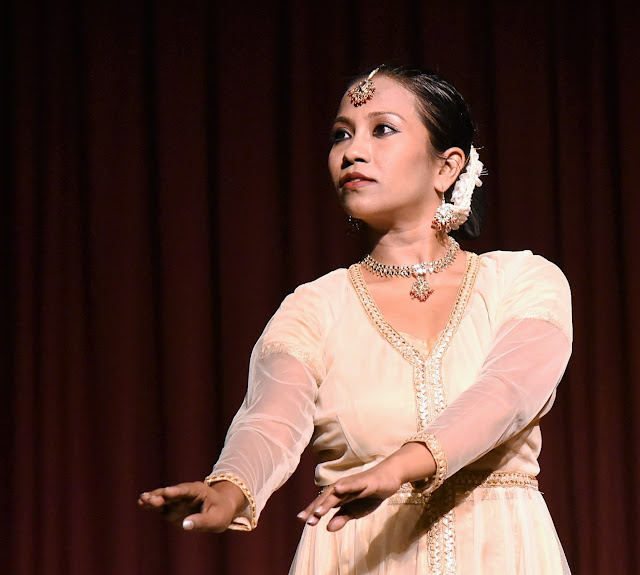 Anindita sat in a foetal position to show Ahilya as a stone, dragging her feet as she reminisces about her past. She recollects her tying the knot with Rishi Gautam. She would hear his footsteps coming towards her chamber and spread flowers all over her bed in wait. As she opens the door and takes his pada dhuli on her head, she does a pranaam. She has to go through this mundane routine every day when he leaves for his tapasya in the morning, collecting his stuff, his kamandal, dand uparna and then as he returns at sunset, doing the chores again, taking back his belongings and doing his seva. But as she goes to the stream to fill water, she looks at her own reflection. 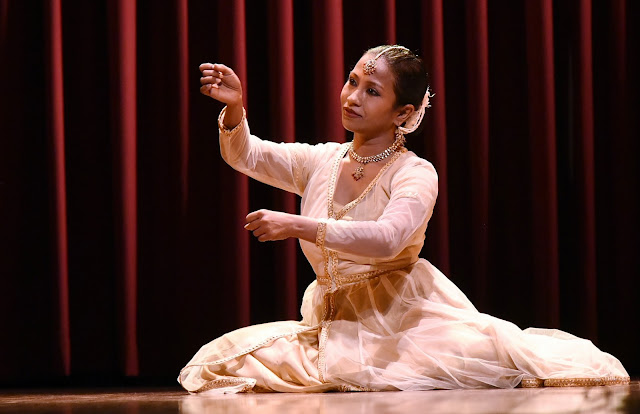 In the evening, she performs the routine of opening the door and putting his belongings back, offering him food as she fans him. Later, when she finishes her own meal and winds up, she goes back to her husband’s chamber to find him asleep already. She tries a bit to waken him and is saddened when she sees that he is fast asleep. Dheerendra recited a part of the poetry, ‘Arpan kar doongi yeh namankit suman deh’. 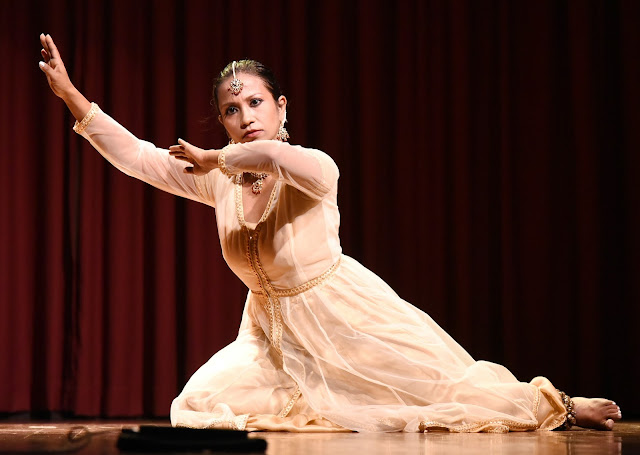 Anindita portrayed the entire sequence of events with such sensitive bhavas that Ahalya’s every emotion was conveyed. Indra is enamoured by her beauty and comes in the guise of the rishi. Even the cuckoo sings as he looks at her beauty. As per their routine, Indra, in the guise of the rishi, gives his stuff back to her and she welcomes him back home, taking the dust from his feet and putting it on her head. After sleeping with her, he goes away. Soon after, the real rishi returns. Realizing her mistake, she begs for pardon, but Rishi Gautam curses her to become a block of stone. Dheerendra recited, ‘Kyun banna hai mujhe Ahalya jise barson lag gaye ek Ram ki pratiksha mein?’Anindita performed this piece excellently – in fact, the best in the entire production. The abhinaya was very expressive, very sensitively done and conveyed all the nuances and emotions in the story. She blended it very well with her nritta – tihais, parans and parmelus. 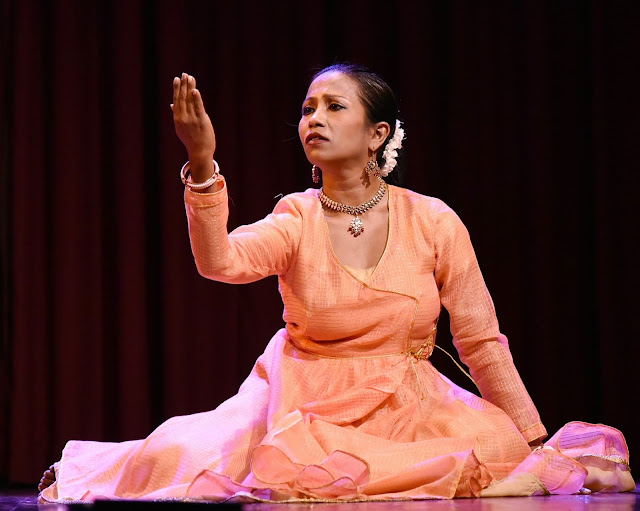 The third piece, ‘Shyamamayi’, was choreographed by Rachna Yadav. Sometimes, attaining your desire becomes the prime object of your life. You and the desire become one. Meera broke all the shackles of a very conservative society and did not accept its norms while she was on her path to fulfilling her desire to be one with Krishna. After an interlude of pakhawaj by Mahaveer Gangani and tabla by Yogesh Gangani, Anindita performed the piece in a peach costume. She began by depicting Meera as a new bride, decked up in her solah shringaar, through a gat – ‘jhumka nath kangan, payal, kati kinkani’, all these ornaments are adorning her. And then there is a sudden change of attitude when she finds all this a hindrance. She addresses the Rana, telling him ‘Soona re Ranaji tharo desh, jootha sab sanchi Hari ki preet.’ And then using some footwork and tihais, Anindita enacted the poem ‘Shyam bina mora jiya na lage’. She is looking in the mirror and removing all her ornaments one by one – her jhumka, bangles, saying ‘jhootha manik moti abhushan’. She puts all the ornaments away and picking up an iktara in her hand, she goes on with her search – ‘sanchi thaari preet, soona lage tharo desh’. Anindita poignantly conveyed the emotions of viraha mixed with rebellion, infused with a bit of technique in the form of tukdas and chakkars. 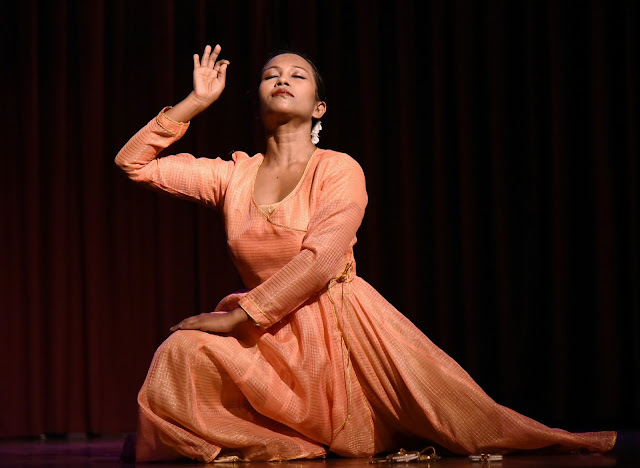 The last piece was called ‘Main’. This piece was choreographed by Anindita herself. And it really was Anindita’s voice, rendered with all her might. A modern woman is not subservient. Her quest – ‘who am I?’ – ends with ‘I am me’. She built it up gradually, starting with the beauty of Radha, going on to the pain of the desire of Ahalya and the revolt and strength of Meera, finally coming to herself. Every woman embodies all three, and yet wants to be herself. Gauri recited the following: ‘I am free to see myself in my own light, my thoughts, emotions, identity.’ And though she embodies all emotions, finally, she says, she is not open to any kind of interpretation by society. She is ‘anindita’ – she who cannot be criticized – and here she made good use of her name. 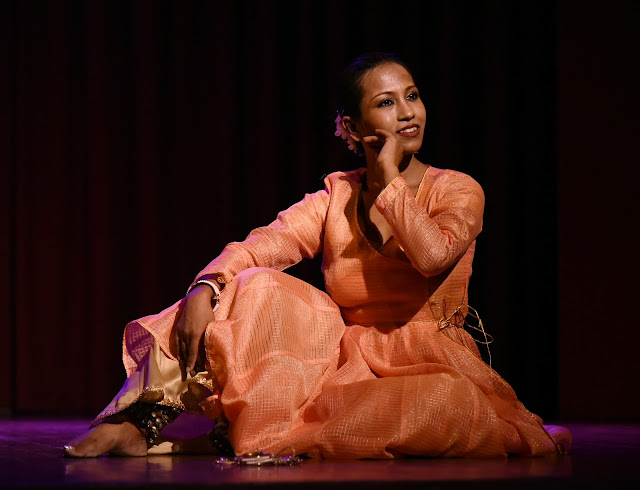 Later, Anindita said, ‘I wanted to take all pieces relevant to me. The first I thought of was Ahalya, and then the rest followed. As women, we have these characters within us – Radha Ahalya Meera.’ As she progressed through each of the three women from mythology, she also built up her abhinaya, getting into the skin of the characters. Her technique was very sound and she built up the entire production very subtly, gradually moving to assertively state, ‘‘I am main’’.’

For the entire production, music composition was by Samiullah Khan, light design by Govind Singh Yadav and costumes by Rachana Yadav and Anindita Acharjee. The artistes accompanying Anindita were Yogesh Gangani on tabla, Mahaveer Gangani on pakhawaj, Samiullah Khan on vocals and harmonium, Kiran Kumar on flute, recitation by Gauri Diwakar and padhant by Gauri Diwakar, Dheerendra Tiwari and Rachana Yadav.