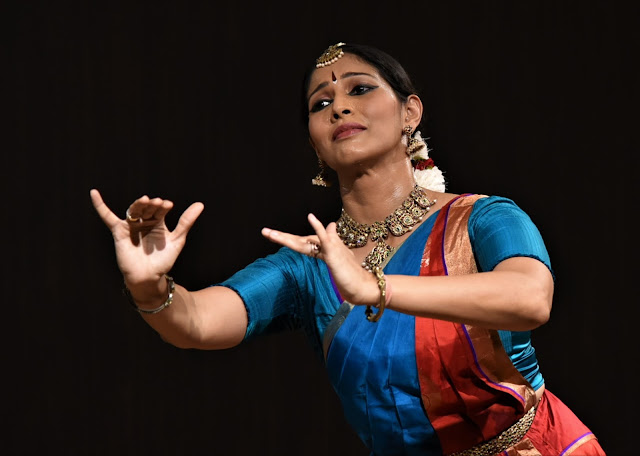 A few months ago, Sandhya Raman’s Desmania Foundation organized two Bharatanatyam performances at her Atelier store in Delhi. First up, Prachi Save Saathi explored the ashtanayikas in a solo Bharatnatyam performance. Set in a magical, moonlit autumn night, the story is woven around the raas on the banks of the Yamuna. ‘Ashtaleela’ was presented through the verses of Surdas. I missed a bit in the beginning; Prachi had already presented vasakasajja nayika, the one who eagerly awaits her nayak, who adorns herself and her chambers waiting for him. The pada used was ‘Jhoomak sari tan gore ho’. This was followed by virahotkanthita nayika, the one whose nayak does not come at the appointed time; she is despairing and anxious due to the separation. The verses said, ‘Bina Gopal bairan bhayi kunje’. 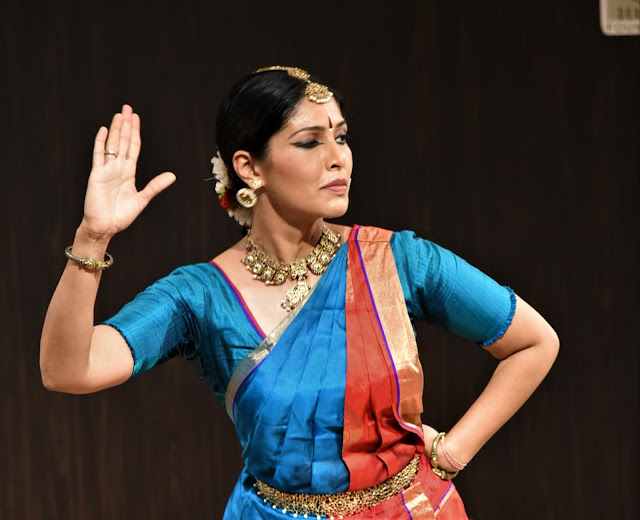 The next nayika was swadheenabhartrika nayika, the one who rules her lover through her love to the extent that the nayak is subjugated. The verses said ‘Puni puni kahati hai brijanari, dhanya bada bhagini, Radha tere bas hai Giridhari’. Prachi depicted the attitude of the nayika, who knows that her lover will fall at her feet. He is tied to her little finger. Any gesture of hers would be an order to him.  It is her breath that fills the melody in his flute. ‘Shyam dharat na dheer’ was enacted’. He is impatient if he cannot meet her, and to get his bansuri back, he falls at her feet. 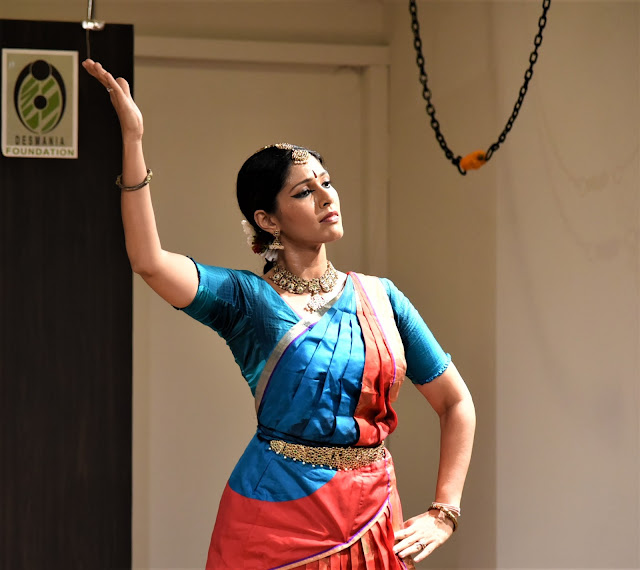 The next was kalahantarita nayika, the one who has quarrelled with her nayak and now regrets her behaviour. ‘Main apne jiya garv kiyo, vayi antaryami sab jaanat, dekhat hi un charchi liyo,’ say the verses. She acted on her pride then and is now regretful and grief-stricken. As she is wallowing in her regret, she collects flowers, bedecks her chamber and waits for him. Finally, despondent, she shuts the door again. 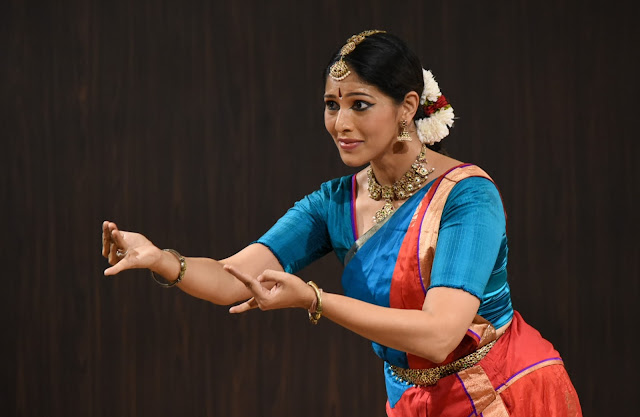 Next was khandita nayika. Khandita nayika is the one who has quarrelled with her nayak as she has seen him having a dalliance with another woman. She tells him to go away. And yet, she longs for him when struck by the arrows of Kamdeva. Prachi’s eyes expressed a lot of the emotions of a khandita nayika. ‘Aavat dekhi aan banita raat dwaar kapaat diyo ri, apne hi kar saakari saari,’ say the verses.

Next, she performed vipralabdha – the nayak promises to meet her and yet does not appear. Hari had asked the nayika, through a letter, to meet at the Yamuna, but he did not come. As she sees the bees on the flowers, she is struck by the arrows of Kamdeva and she thinks of Krishna. Surdas ji’s pada is ‘Udho Hari kahe ke antar jaami, ajahun na aaye milat ehi avasar avadhi patavat lami’. 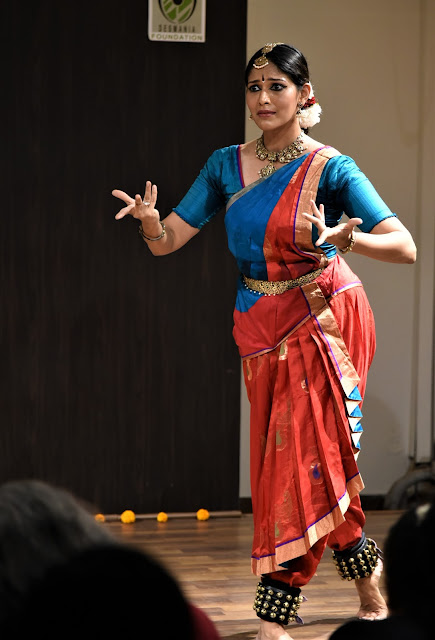 Prachi then depicted the proshitbhartrika nayika – she is the one whose nayak has been travelling for work and in her separation, she has given up her ornaments: ‘akhiyan hari darshan ki pyaasi’. She remembers his kamal nayan, tilak, motin ki mala and in her isolation, she becomes the butt of everybody’s jokes. She doesn’t like to see the mirror, removes her ornaments, and is overpowered by the yearning to meet him.

Next was abhisarika nayika, the one who unabashedly goes to meet her lover. She doesn’t have any control over her emotions: ‘Chali ban benu sunat jab dhai’. She opens the doors and runs like a river, a sarita. Thunder and rain are no deterrent as she flows, gushing. She applies tilak, nasamoti, kankan, hari chandan and muktamani. As Gopal roams vrindavan with his calves, the nayika and He are like lotus and the bee. 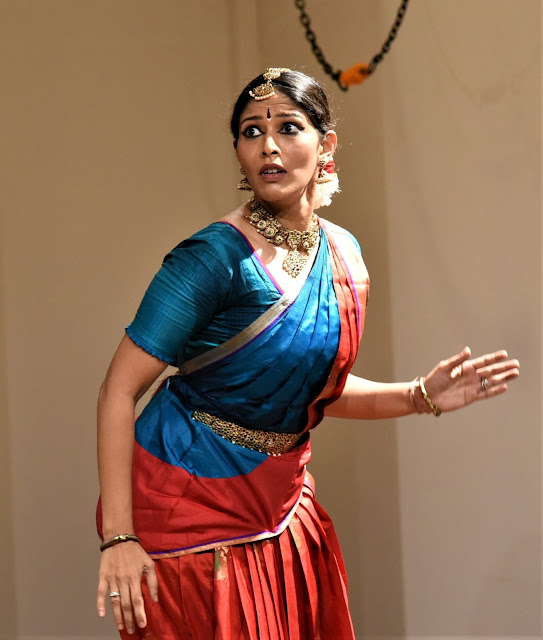 Finally, Prachi depicted Krishna calling each one of them and playing raas with all of them: ‘Gopi gopal baal raas mandal mahi’. What follows are the sounds of various musical instruments and unmaad in raas. 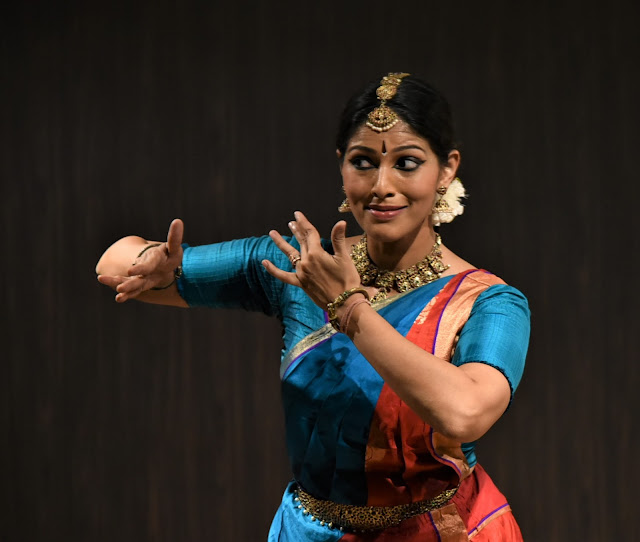 Prachi’s nritta was very expansive, very precise, with a lot of agility. Her jaatis were beautifully composed, her abhinaya very expressive, and she emoted a lot through her eyes, acting out each of the various moods of the ashtanayikas. The final raas was especially well-choreographed.

Prachi said, “This was an exploration of the ashtanayika through the verses of Surdas. There was a research article by Ojaswita Chaturvedi on this poetry and I worked on ‘Ashtanayika’ under the guidance and mentorship of Guru Rama Vaidyanathan. Dr. Vasudevan gave the music and rhythmic inputs. I choreographed the piece under the guidance of Rama ji.”