The dwelling of a deity, called a dhaam, is as dear to the bhakta as the deity himself. The kshetram is the deity personified. Usha RK, in the Divya Kshetram series, juxtaposes the attributes of the deity in two different geographic regions. 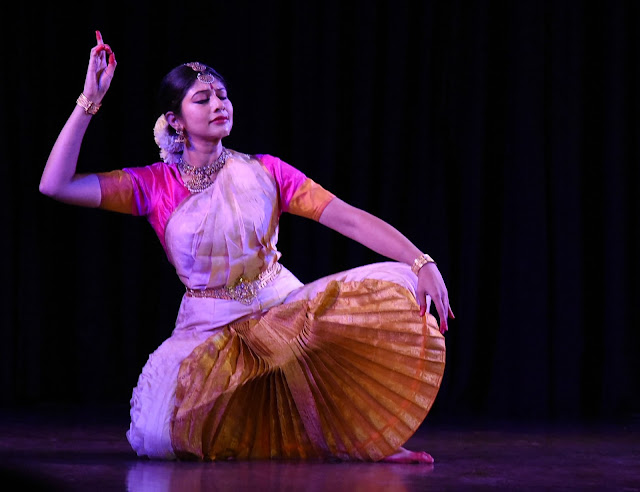 Tirupati Venkata Kshetram was presented by Dakshina Vaidyanathan Baghel, disciple of Gurus Saroja Vaidyanathan and Rama Vaidyanathan. Tirumala was an established centre of Vaishnavism around the 5th century AD and was praised by Alvar saints. The temple rites were formalised by saint Ramanujacharya. That is why is Balaji the richest god in the world, collecting over 11 million rupees daily in the hundi. 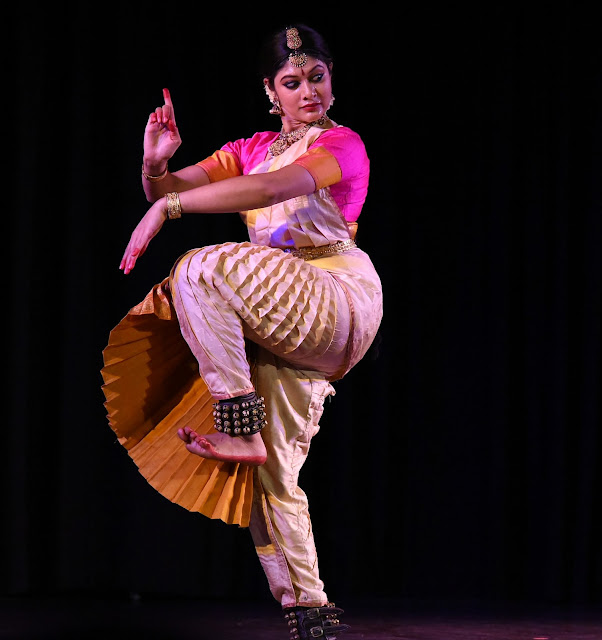 In Dakshina’s presentation, the first segment depicts the Lord reclining on the Adishesha. The seven hills surrounding Tirupati symbolise the seven hoods of Adishesha. The bhakta sees the golden pillars, passageways, the towering flagpost and the majestic gopuram, which were built by Thondaman Chakravarthi. Here, you see the spectacle of 10,000 heads of Shesha. To purify oneself, one must bathe in the Pushkarini, which is filled with lotus flowers. Visitors have to pay homage at the Adivaraha Swami temple first. This entire geographical description of Tirupati Balaji temple was depicted by Dakshina. The legend says that the lord was hit on his head by a shepherd and a small portion of his scalp became bald. This was seen by Neela Devi, a Gandharva princess, and she cut a portion of her hair and implanted it on the scalp of the Lord. That explains why devotees offer their hair at Tirupati, so that Neeladevi is the recipient of them. One of the seven hills is named Neeladri for her. The marriage of the Lord Venkateswara to Alamelumanga was an expensive affair. He had to borrow money from Kubera. The loan was for 11.4 million coins of gold, which the devotees help to repay by donating in the hundi. 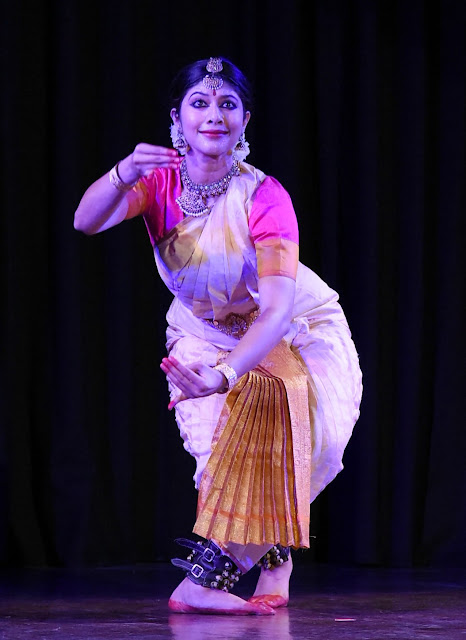 The performance started with the melodious notes of the flute. Dakshina depicted the geographical details of the area. The stance of the Lord with the placement of the hands was depicted. The seven hills, the hoods of the shisha, were shown, the pilgrimage through the dwars and then the purifying bath in the Pushkarini. Finally, she depicted arriving at the last dwar, with the bell which is struck by all pilgrims. The rest of the depiction was about the practise of donating their hair. Dakshina, through her precise, poetic movements of hands and feet, portrayed the entire piece, giving the audience a vicarious experience of the rituals practised there. Anything so factual is difficult to show. 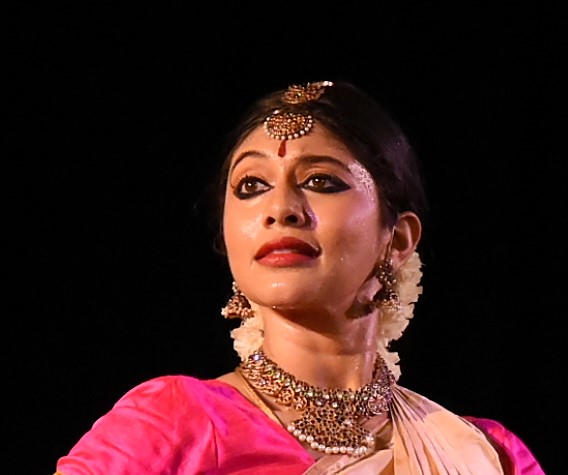 The second segment was the sanctum door or ‘Garbha Griha Dwaram’. The Garbha Griha or the sanctum sanctorum where the Lord resides is the Ananda Nilayam. Saint Annamacharya would himself perform the rituals of sewa there. About the posture of the Lord, Dakshina depicted his right hand, which is not in the Abhaya Hasta position. The four fingers of the right hand point downwards, towards his feet. They denote Dharma, Artha, Kama and Moksha. These can be attained if you are at his feet. The left hand shows that all your troubles will wither away at his feet. The manner, the poise, the subtlety of Dakshina’s hand movements, everything made it a moment of realization. Annamacharya’s songs and poems were offered at the feet of the Lord and he hid them in the coffers of the temple. It was only in the 1930s that these compositions were found. 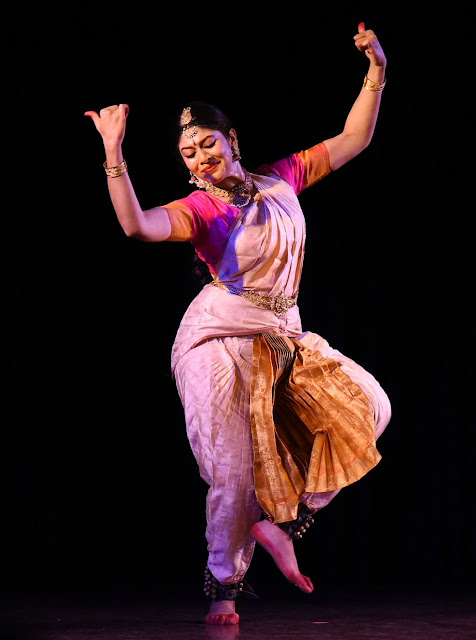 The door of the sanctum is given a great importance in the sewa paddhati of many temples. It stands between the Lord inside and the bhaktas outside who come for sewa and darshan. Dakshina depicted that the night has passed in vilas for the divine couple. The piece started with the clanging of bells when the doors of the sanctum are opened. The priests come for the morning rituals with shankha dhwani. Then follows the aarti, pushpanjali, snan and the shringar with garlands, mukut and tilak. Lord Venkatesh and Goddess Alamelumanga reside in their idols the entire day for the love of their devotees. Finally, night falls and after the ratri sewa, the doors are closed. They are left alone and it is time for their passionate vihar. Goddess Alamelumanga tells her Lord that his hands clasped on her wrists are preferable to gold bangles. A string of his kisses around her neck is better than a necklace. His arms around her waist are any day better than bejewelled belts. His gaze, his words, his laughter are a web of passionate love. All this had to be rendered in dance with a lot of sensitivity and sensuousness, which Dakshina brought to her abhinaya, along with delicacy and excellent expressions. 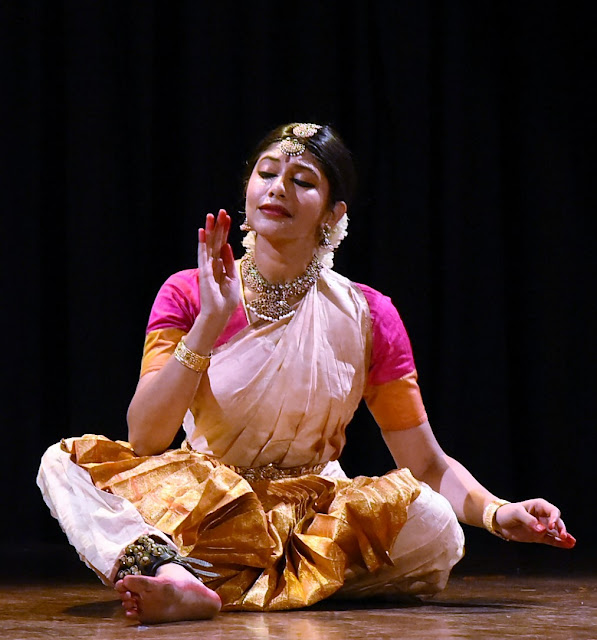 As dawn breaks, behind these doors, the world of love for the two stops. The bells start ringing again, the priests start reciting the mantras again – ‘Uttishtha Govind garudadhwaje, kamalakant trailoke mangam kuru… suprabhatam.’ The god and the goddess collect themselves to reside in their idols again and assume their stances, ready to accept the sewa and give the darshan to the pilgrims waiting for a glimpse. The music, the ringing of bells and chanting by Dr S. Vasudevan perfectly created the ambience of the temple, and Dakshina’s dancing transported you to the transcendental realm of the bhakta kneeling in front of the door. Anybody who is familiar with the sanctity and exhilaration of that moment could experience it. 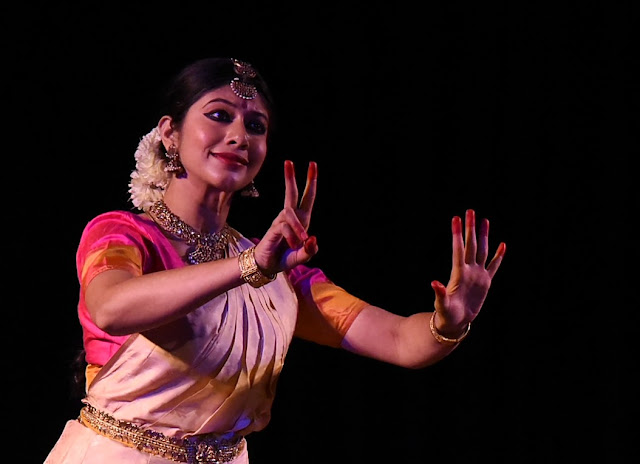