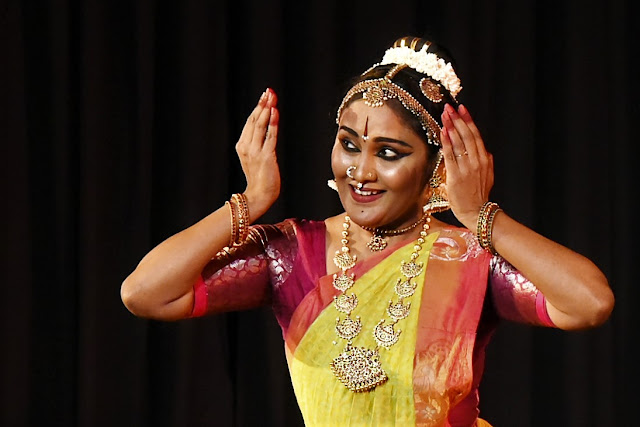 Each year, the Natya Vriksha Dance Company, headed by Geeta Chandran, organizes a two-day World Dance Day celebration. This year’s was also held at IIC, New Delhi, like all the others. It is a peek into the hard work, dedication and immaculate curating of the Natya Vriksha team. The festival also gives an opportunity to young dancers to shine.


This year, on the evening of the second day, Kuchipudi exponent Sreelakshmy Govardhanan took the stage. She is well-known for her abhinaya and footwork. She has been trained by renowned gurus like Pasumarthy Rattaiah Sarma, Vyjayanti Kashi and Manju Barggavee. She started with a composition that was an ode to Lord Ganesh, highlighting his attributes. 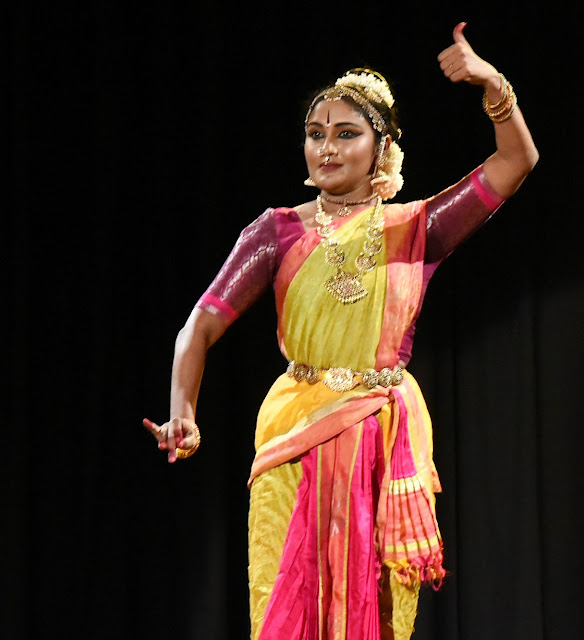 Next, she did the entire Ramayana in brief in the Kuchipudi repertoire, a traditional Kuchipudi shabdam. The stuti begins with an ode to Lord Rama – ‘Shriraghavam sitapatim raghukula ratnadeepam aravind nayana namami’. The four sons of King Dashratha were born after a yagna. They are trained at the ashram of Rishi Vishwamitra and from there they are taken to the Sita swayamvar, after which Rama is married to Sita. What follows is the exile to the forest for fourteen years for Rama, Sita and Lakshmana. Sita haran by Ravana when Rama and Lakshmana leave in the pursuit of the golden deer, and the episode of Jatayu trying to rescue Sita and then being killed by Ravana, was done excellently through abhinaya. Hanuman and the monkey army’s march to Lanka, the war and the killing of Ravana in the war - the entire story was encapsulated in one piece. What was remarkable about the performance was the pace, footwork, rhythm and the expressions and abhinaya, the precision and fullness of the hand movements, which held the audience in awe. And finally, she took the stance for Rama, Sita and bhakta Hanuman at their feet. 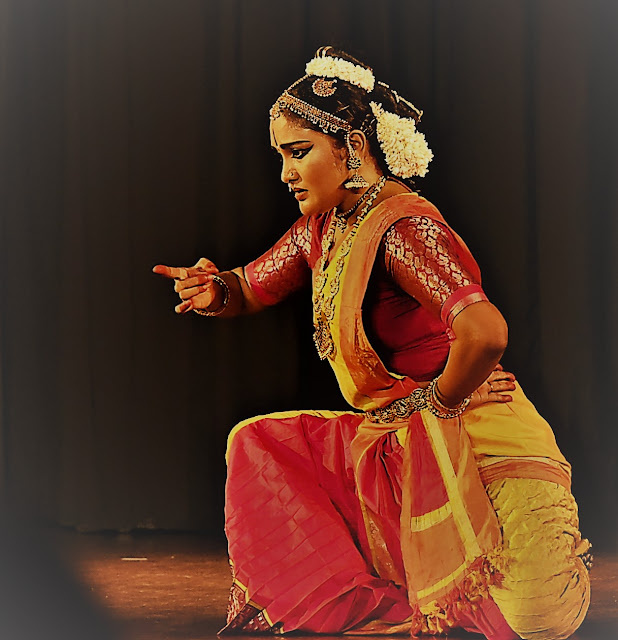 Next, she performed the Navarasa, associating the nine rasas to Krishna’s leelas. Here again, we could see the meticulous work of the dancer. Lord Krishna is worshipped as ‘kamalanayan, indumukh, kundavanamala, meenakundal, neel megh shyam gaat, peetavasan, koustubhamani, shankha chakra yashoda nanda kishore’. The navarasa that Krishna leela evoke are embodied in a navarasa shloka. Gopis exhibit the shringara rasa in their leelas with their beloved Krishna. The thought of him makes them so lost that they go into a reverie, tracing his name in the dirt with their toes. Draupadi evokes the karuna rasa as she is helpless in the hands of Duhshasana and the other Kaurava princes. Her total surrender to the Lord and ultimate call for help brings tears to her eyes and to the eyes of every beholder. Arjuna sees veer rasa in Him in the battlefield of Kurukshetra. It is when Arjuna lays down his weapons in despondency that Krishna, as his charioteer, makes him aware of his duty and asks him to fight. Gandhari holds Krishna responsible for the death of her hundred sons. The bhava within her when she sees Him is raudram. She gives Him a shraap in her anger. The vibhatsa rasa or revulsion is seen in mother Yashoda after Krishna has defeated the serpent demon. She pulls him out, sticky with mucous. The revulsion was depicted accurately by Sreelakshmy as she sees the sticky child, chides him and asks him to go for a bath. Bhishmapitamaha lies on the battlefield pierced by Arjuna’s arrows on the sharshaiya. He looks at Keshav and experiences the shaanta rasa. Adbhut rasa is seen in Indra when, even after days of torrential rain, Krishna lifts the Govardhan parvat on his little finger, protecting Braj from the downpour. Kansa shows the bhaya rasa when he hears that Krishna has vanquished the Kuvalaya Peed elephant guarding his fort. He knows that his end is near. The cheerharan leela provides the hasya rasa. Each rasa, with its expressions, abhinaya and nuances, was conveyed consummately in nritya and technique. 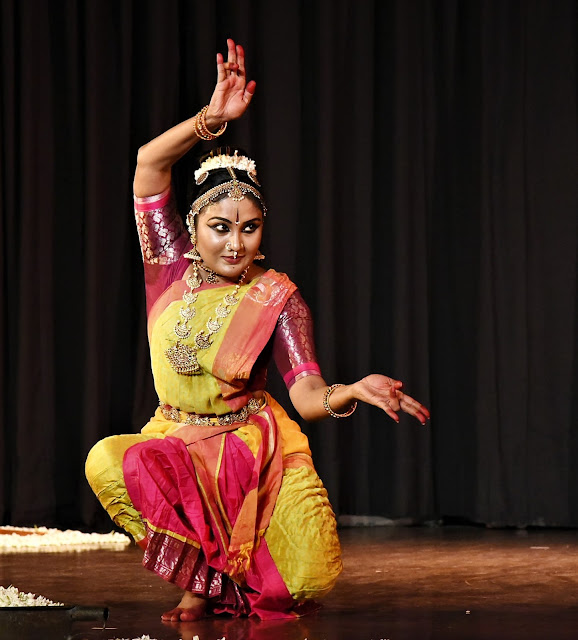 Putana Vadh was the next piece. Putana was the demoness sent by Kansa to kill Krishna in Nandgaon when he was just an infant. She brings poison for him in her breasts. Disguised as a beautiful woman, she approaches the Nanda Bhavan. But here, as she is welcomed and loses herself in the chores that the gopis are performing around her, she gets distracted from her motive. They are churning butter, milking the cows, and in that, finding joy. They dance and frolic. She finds it all the more difficult to hold the demoness in her. She wants to be a part of this rather than kill the beautiful infant sleeping in the palana. She plays with him as she swings the palana, feeling motherly love, and starts feeding him. The expressions used to show the conflict within her were very sensitively brought out. But as Krishna begins to suckle, he sucks the life out of her. She feels pain that becomes increasingly excruciating and unbearable. The pain goes through her body and ravages her till she finally falls dead, with the little Krishna playing on her. 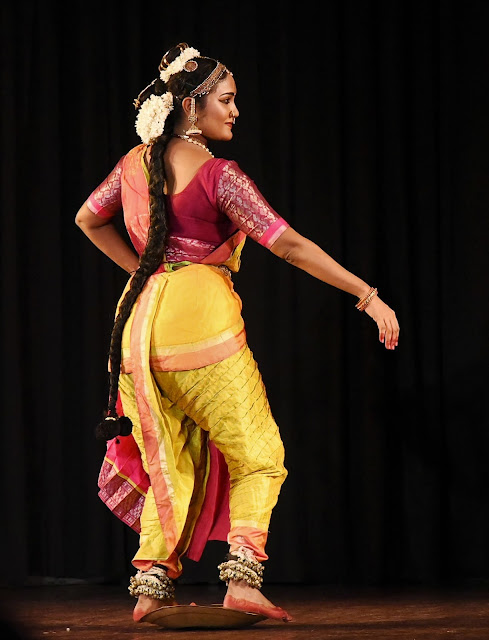 The story is oft-related, but to leave an impact on the audience, the rendition, with the right expressions and abhinaya, the right body language, have to be just right. Sreelakshmy, with this piece, again re-established her prowess in this area. What followed was the tarangam with stuti - ‘karamurali, shruti laya noopuratalam’ - with jatis on the plate, and a quick reference to dashavatar - ‘dashavidha roopa hare jaya Jagadish hare’ - a performance that elicited a standing ovation from the audience.


The next performer was Vidyagauri Adkar, a Kathak exponent from the Jaipur gharana, and a disciple of Pt. Rajendra Gangani. If the previous performance for the evening stood out for its abhinaya and expressions, which are considered an integral part of the Kuchipudi style, this one stood out for its technique, pace and nritta, which is dominant in Kathak. Vidyagauri turned out to be a lot of power in a small packet. 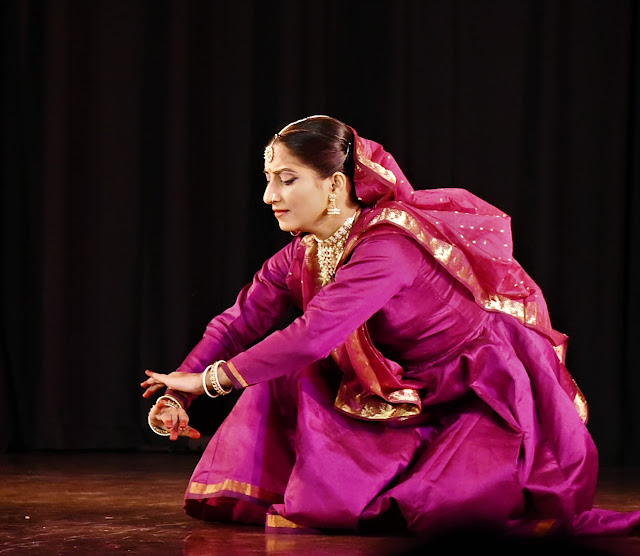 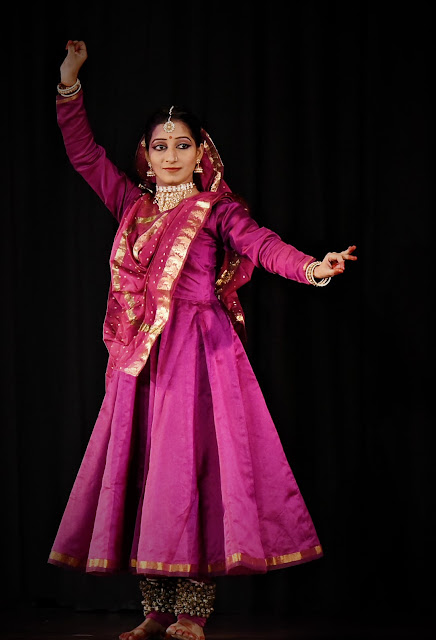 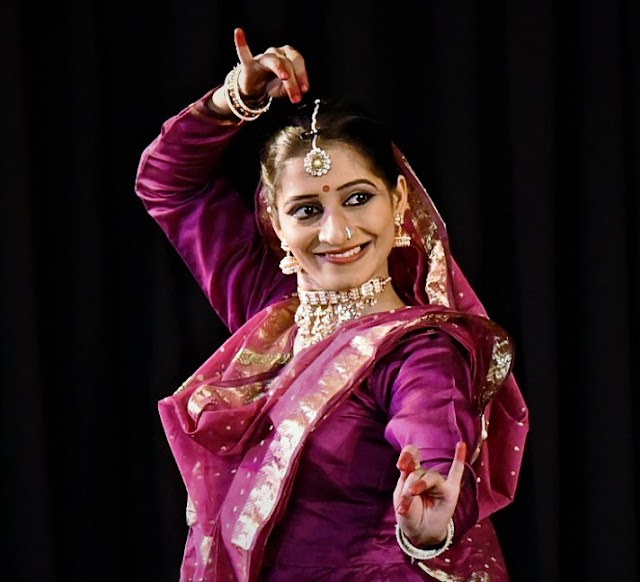 Next, she presented the technical portion in teen taal in the Jaipur gharana style — paran, aamad with 27 chakkars, including ek paer ke chakkar, tihais and tukdas in pace, thaat in vilambit with poise and twisting feet, uthan, dha paran, an avartan in panch jati, a bandish in mishra jati, a mor ki gat in tishra jati, a paran in chatushra jati, kayda, chakkardar paran, sangeet ka toda, Banaras gharane ka toda in dhrut laya, mridanga yati, and finally a bandish. 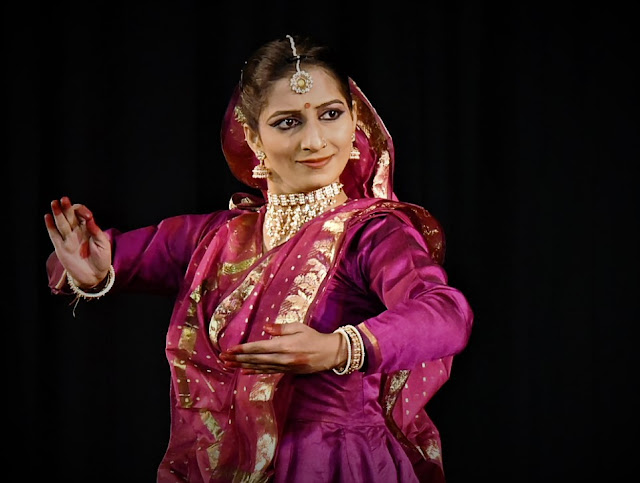 She finished her performance with an ek shloki Ramayana, where the entire Ramayana is condensed into one shloka. Her portrayal, however, was of only Sitaharan and Ravana vadh – mrig kanchanam Vaidehi haranam, Jatayu maranam, Sugriva sambhashanam, Bali vadham, samudra taranam, and finally, the war in Lanka and Ravana vadh. Each episode was elaborated with nritya along with nritta. The episode of Jatayu needs a special mention since it was rendered very aesthetically. As I said earlier, it was a roller-coaster ride for the audience. She danced with pace, stamina, technique, poise and hit just the right notes.