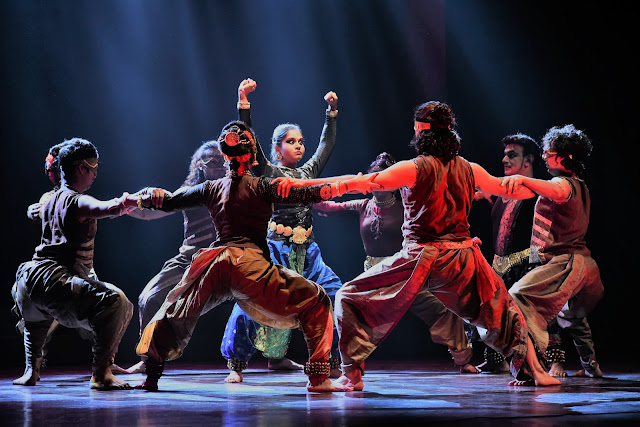 Early in February, a three-day festival was held by Kalashram to mark the eightieth birthday celebrations of the legend Pt Birju Maharaj. Among the many artists presenting mostly Kathak at Kamani, an exception was Kuchipudi guru Vanashree Rao, who presented her choreography Abhimanyu Vadh. Vanashreeji has founded Rasa United, a multi-style dance team, to present dramatic tales or stories from Indian mythology. 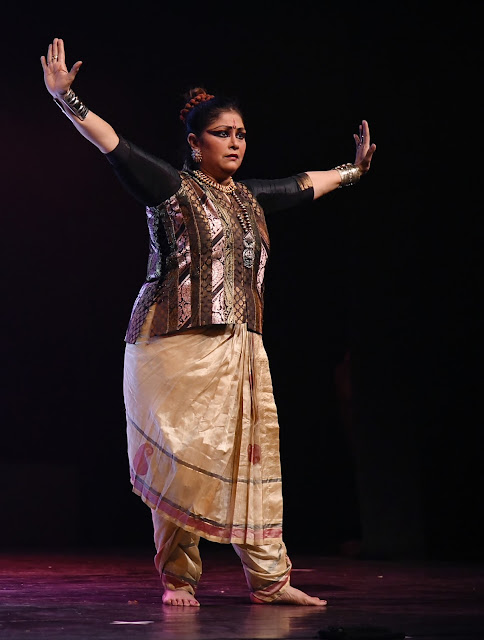 The story of the death of Abhimanyu, the son of Arjun and Subhadra, in the Mahabharata, can move you to tears at any time. The tale was depicted using Kuchipudi, Chhau and Bharatnatyam. Arjun relates to Subhadra the trick that’s needed to enter and exit the Chakravyuh, a formation in the war, while she was pregnant with Abhimanyu. But Subhadra listens to only half of it and falls asleep, and Abhimanyu, as a warrior, only knows the first half. When the war is at its peak, Abhimanyu is sent into the Chakravyuh. He fights valiantly but is killed by the Kauravas, who outnumber him, and Arjun pledges to avenge his death. 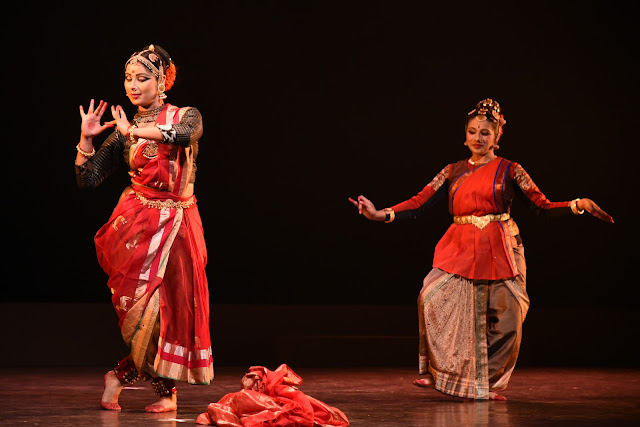 This particular piece was a feast of dance and creativity. Vanashree appears dressed as Dronacharya, The Guru. In a soliloquy/solo, she expresses his distress at the manner in which the young, valiant warrior was killed by the Kauravas. According to dharm, suniti, sukarm, it was a dastardly act which pained all the elders. Vanashreeji’s costume was done very well, as was her act. The scene goes back to the time when Subhadra is decking up in her chambers. This was done by Kuchipudi dancers in beautiful costumes. When Arjun comes into the chambers, they have moments of a love dalliance. Arjun displays his skills at war in front of her, and starts narrating to her the infiltration of the chakravyuh in the war. Abhimanyu in her womb is learning it and halfway through, she falls asleep. During the war, Abhimanyu is sent in to break the formation of the Chakravyuh alone. 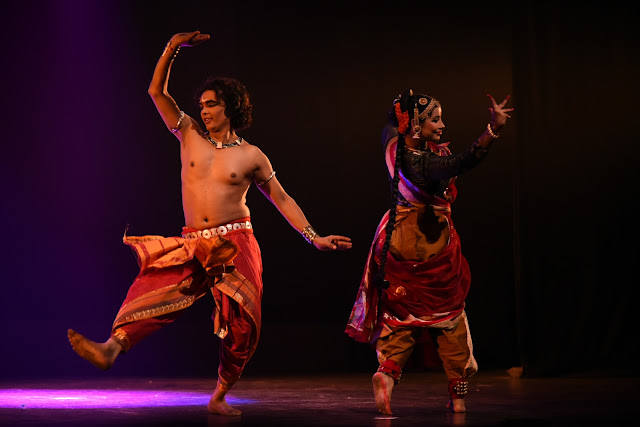 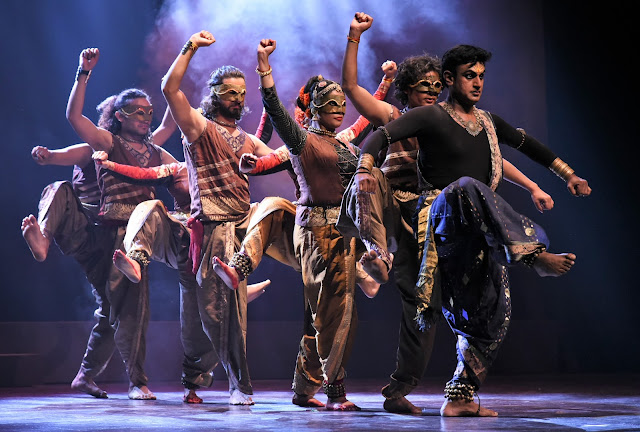 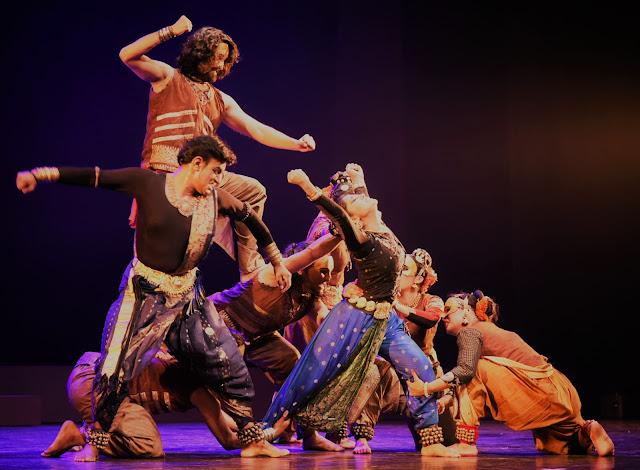 Abhimanyu was enacted by a young female dancer in a black and blue costume. She was an excellent dancer, portraying Abhimanyu in Chhau. S. Vasudevan, in black, danced as Duryodhan in Bharatnatyam. Abhimanyu is trapped on all sides by the Kauravas, but keeps fighting to the last, inflicting wounds on them all. He escapes a few times. Finally, he is killed by all of them together when he is unarmed and calling his father, Arjun, for help. 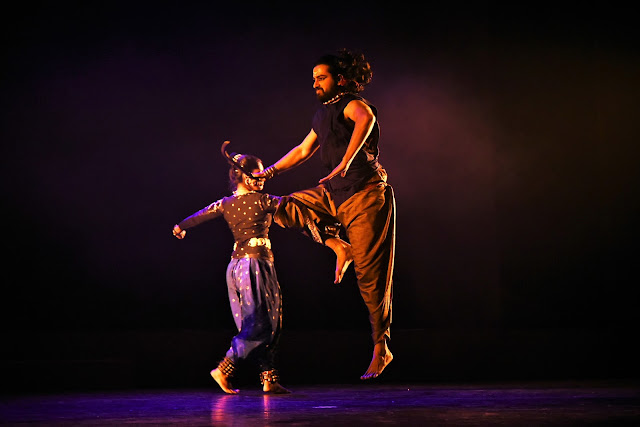 The chakravyuh was created by Chhau dancers in masks. It was the costumes and the very powerful Chhau movements of a warrior that made a big impression. Arjun is overwhelmed by rage and sorrow when he sees his dead son, and pledges to kill Jayadrath. Subhadra appears in black, bereaved at her son’s demise. The technique was flawless, and the costumes, the powerful dancing, rhythm, music — everything made it consummate storytelling. The abhinaya was so convincing that your eyes welled up at the end of it. The pain was contagious. S Vasudevan with his Bharatnatyam, and the Chhau group of dancers, under Kuleswar Thakur, did a flawless job. The dramatization was done immaculately. 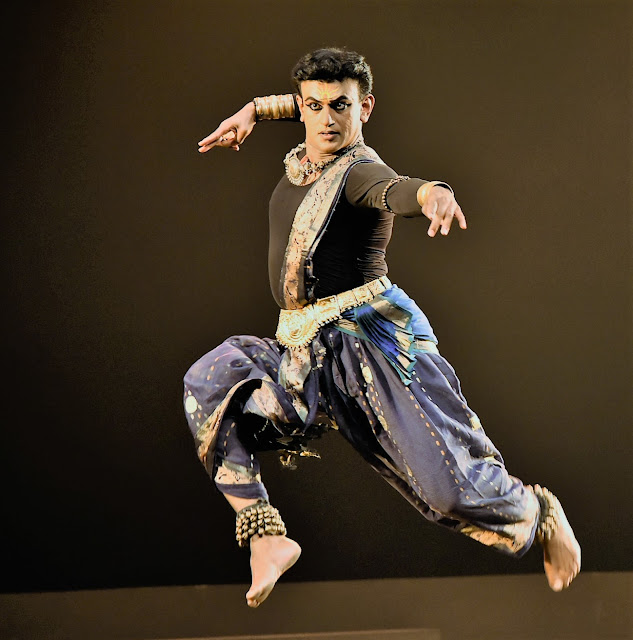 The concept, script and choreography were by Vanashree Rao, Chhau choreography by Kuleswar Kumar Thakur, and Bharatnatyam by Dr. S. Vasudevan. Dr. Vasudevan, along with K. Venkateshwaran, also did the music, which had drums by R. Kesavan, flute by Rajat Prasanna and violin by Master Raghavendra. The special effects were by Prasanna, masks by Shamim, makeup by Naresh Khare, lights by Milind Shrivastava, and costumes by Vanashree Rao and Sandhya Raman.