Within this physical body lies a heart that throbs with emotion, and within that lies a soul where the Almighty resides. Aditi Mangaldas, the famous Kathak and contemporary dance exponent, presented her production Within at the Kamani auditorium on the 18th of January. Delhi had been very chilly that evening, but what really made you shiver was a cage or nest-like structure made with iron rods in the dark foyer, lit by a few flickering diyas in the centre. It really made you ponder.


I have featured this production on my blog here when it was premiered in 2013, but I would like to write a report on it again since it produced new sensibilities and generated deeper thoughts the second time around.


The first segment was called Knotted, performed in contemporary dance based on Kathak. It shows the dark emotions within us, like brutality, hatred and jealousy. The background was a dark, cracked surface which, according to Aditi, is the landscape of our emotions. The costumes for the dancers were dark and in ashen colours, designed by Kimie Nakano and executed by Sandhya Raman. The dancers start by running around to thumping music. They sprint across the stage at great speed and then fall – a scene that would remind you of any unrest that you have seen in a turbulent city these days. They stomp their feet, hold their hands clenched or open them, spinning their arms around at amazing speeds. The nritta that the male dancers were doing, especially, was very powerful. They would fall and do wriggling movements showing pain. They were angry, disturbed and scared, radiating these emotions into the audience. Aditi’s moves too suggested thirst, pain, distress, and then there were a few scenes which showed control and power over others, as if holding them like puppets. Power and violence go hand-in-hand. They were slaying and taunting each other. While she depicted a burning feeling, with anguish and stress, the other dancers sitting in one dark corner of the stage made smiling, demonic faces, showing the irony of the whole situation.


Aditi’s covering her eyes, ears and mouth was again very ironic since these symbols are for non-violence. The music had very jarring tones and the dance with footwork and chakkars had a lot of pace. Amid thunderous sounds and wriggling dancers, a feather falls and Aditi tries in vain to keep it down. Again, the slithering and rolling and wriggling movement of the dancers. Aditi sat in a foetal position with her back towards the audience, where she is trying to fold and unfold her limbs, and then pull and untangle them. The strings of tensions wrap up the body. 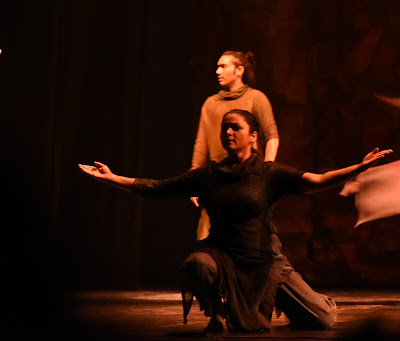 The movements suggested how much a person is wrapped up in negative beliefs, and this keeps their mind bogged down and knotted. And finally, the dancers covered their faces with shrouds, indicating that they have closed their minds to any kind of positive thoughts and the Almighty.


The second segment was in pure Kathak, titled Unwrapped. The costumes were off-white and the shroud was tied around the face with a knot at the back, which did not appear a very comfortable one. The pakhawaj players, Mohit and Ashish Gangani, sat on the stage with their backs to the audience, playing live. 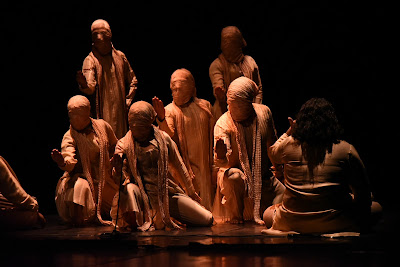 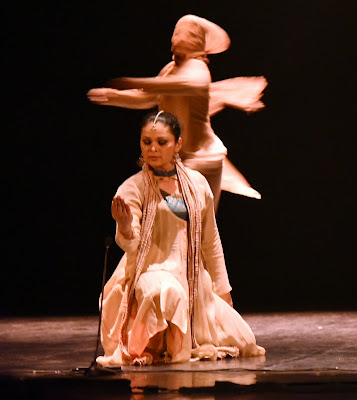 This segment is about the journey within. You have to find the right mirror to show who you are and it is only after discovering the humanity inside that you find nirvana. The dance gradually gained pace, with vibrating ghungroos, claps and fast nritta. As the tied faces symbolized the facelessness of the humans, the dancers would raise a hand as if to look in a mirror, try to look and with the other, push it down. A mirror cannot reflect a covered face.


After Faraz Ahmed had done some live singing on the stage, Aditi recited, ‘Wrapped up in yourself, you hid from me, all day I looked for you.’ Twisting feet, padhant and gat in Kathak saw the dancers unveiling themselves gradually. They paired with each other as if to find a reflection of themselves, staring at each other with footwork to mirror the other’s. A percussion break by the pakhawaj and tabla players was followed by a solo by Aditi – ‘Kahat Kabira’.

The dark screen behind lifted, allowing bright light to come in as Aditi stood with her back to the audience — ‘Is ghat antar bagh bagiche, issi mein sirjanhara, is ghat andar saat samandar, issi mein nau lakh tara’ — with waves, while she circled the entire stage with sharp beats. And as the bells of manjira tinkle, there is wonderment in the expression – ‘Is ghat antar anhad garje, issi mein uthat favvara’. This was followed by fast-paced chakkars. She recited poetry, one hand showing You and one hand me — ‘I looked for you, I found you hiding inside me, playing now You, now me’, alternating her hands.

The next piece was a group nritta to ‘Aajra din dooba’. The night of ignorance and darkness ends with the day of enlightenment. And when this day comes to a dusk, the dancers depicted, through padhant and clapping, the shrouds being removed once by each, as if they have shed their negativity. They pick it up again, wrap it up as an afterthought, and then shed it altogether. They ended with silhouettes appearing, chakkars and vibrations of the ghungroos in tatkar, gradually growing faint.
The concept had such a lot of depth that dancing the concept in itself must have been difficult. The music and rhythm by Ish Sehrawat = diffused beats (Sound Reasons) (for Knotted) and Mahesh Vinayakram (Unwrapped) were very impressive, acting as an expression for the concept. The nuanced and impressive light design by Fabiana Piccioli, adapted and executed by Douglas Finley, again, complemented the concept – it’s a very relevant theme in today’s times, where people are full of hatred, jealousy, violence, and as they look within, they find themselves knotted in negativity, which is very painful. Breaking out of it is the call of the times.


The concept and choreography for the production are, obviously, by Aditi, with Morag Deyes acting as mentor. Besides Aditi herself, the dancers were Gauri Diwakar, Minhaz, Sunny Shishodiya, Manoj Kumar, Aamrapali Bhandari and Anjana Kumari. Stage design was by Manish Kansara, dramaturgy by Vani Subramaniam, special mentoring and dramaturgy by Farooq Chaudhry, research by Ragini Pasricha and Aditi and sound execution by Yogesh Dhawan. For Knotted, the recording musicians are Mohit Gangani (tabla), Ashish Gangani (pakhawaj), Saskia Rao de Haas (cello), with the script by Vani Subramaniam. For Unwrapped, the performing artists were Mohit Gangani (tabla), Faraz Ahmed (vocals and harmonium), Ashish Gangani (pakhawaj) and Nasir Khan (sarangi). Besides the original music, there was ‘Aajra din dooba’ by Pt Kumar Gandharva and the recitation of ‘Wrapped up in Yourself’ by Lal Ded, translated by Ranjit Hoskote. The costumes for this part were by Aditi herself.


Later, I spoke to Aditi about reprising Within:

Why did you revisit Within?


Have you made any changes to it over the years?

What we premiered in 2013, it was the first time Within was actually put forward on the stage, with all the ingredients put together. After that, we worked on it for one more year; then it was like finding the essence of it more deeply. That one year, there were a lot of people who had inputs, critics, people whose opinion I value… I read, some of those people came and saw the piece. (At the premiere) We could see it for the first time, I myself had been imagining (till then) what it could be with the lights and all. After that, we worked on it very thoroughly for a year, and after that when we present it, of course small changes I do every time I perform. You’re constantly hoping to fine-tune it. But overall, it has been worked on since the premiere.

Were there any specific changes for this, besides that some of the dancers were different?

It’s not specifically that I changed the dancers — it’s just a pattern that in Drishtikon, it’s a different group from what it was in the premiere. That’s the Drishtikon repertory – whoever’s dancing it, whoever knows the role, whoever’s body and mindset, emotionally as well, can fit the particular dancers’ who had left Drishtikon. We tried a few of them out and that’s how it’s done.

Yes, when you premiere it, there are so many tensions… it has grown since the premiere, or at least I hope it has! The energy has improved, the whole intention has improved because the premiere is the wrong time to judge a piece — everybody’s under pressure, including myself, because the first time you’re putting it with everything coming together, no matter how much you rehearse it in the studio… Though we had the Kamani for a few days before, the overall connection and the communication only happens when the receiver is at the other end to receive what we are communicating. So yes, it has changed – we’ve made it tighter and more energetic, not consciously, but working on it and fine-tuning has done that. There weren’t more chakkars specifically in the first part, no, but we just worked on it with a little less stress and a little more distance, and then you’re able to see where things are not working and where they are.

I found it very interesting that at the end, you remove the stoles, put them down, look at them again and try to put them on, but then drop them altogether…

We start it with that, that the shroud around the face is that inability to say the truth. It is inspired by the quote of J. Krishnamurthy, which is that you will only find yourself if you find the right mirror to reflect who you really are. Only then can transformation be possible, if you first recognise who you really are. And is it possible to find that mirror? The second inspiration was the filter image, which is a cutout actually. You decide to put the cutout against the sky, the sky is the limit. You put it against the loft, the door is the limit.
The shroud shows our inability to find the right mirror to reflect who we are, so in the second piece, as you see, there are groupings of dancers, meant to be like a mirror image, and one by one they take out the shroud, and then comes the solo, which says that ‘ghat antar bagh bagicha’. Everything is within you, but at least look at it. Then when you do look at it - they sing ‘Yaar ko humne ja ba ja dekha’ (Shah Niaz) - they say the beloved is truth, beauty, whatever you call it. But there is that attraction still, otherwise this world would have been a great place – we should not completely forget the shroud. So we should look at the shroud just once and glean from it, for the sake of memory, what we can become or what can be if we are within ourselves. So if you remember, in the first contemporary piece, I’m sitting on the stage right, looking at the dancers, and then at the end again — I’m observing what is happening, but I’m observing what’s happening inside, and that’s when I take out the shroud.