The roopas of Vishnu, Ram and Hanuman come alive in nritya seva 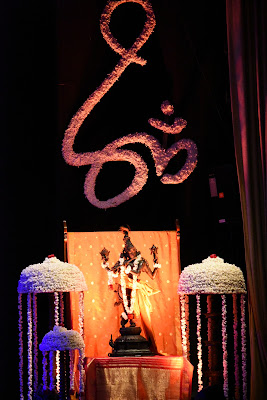 On the 16th of September, the air inside the Chinmaya Mission was filled with the fragrance of flowers and the piety of the occasion. The Krishna statue on the stage was also loaded with flowers. Hung around Him were umbrellas made of flowers. This was for Bhakti Pravah, an event organized by the Chinmaya Mission. After a short talk by Swami Prakashananda ji, the head of Chinmaya Mission Delhi, singer-composer Sudha Raghuraman opened the evening with a Ganapati Vandana, ‘Gaaiye Ganapati jag vandan’, which was sung very melodiously. Next was the performance by Bharatnatyam exponent Geeta Chandran. 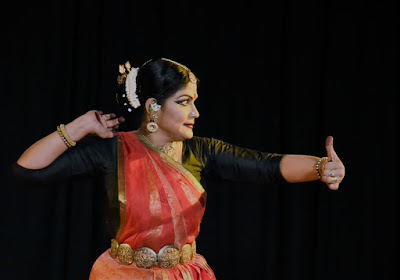 ‘Bhakti bhakt bhagawant guru, chatur naam vapu ek, tinke pad vandan kiye, nashe vighna anek’ – that evening, bhakti, bhakt, and guru, that is pujaniye Amma, were already there, and so the presence of Bhagawant could also be felt. Rajiv Chandran was on the stage to compere the performance, which was titled ‘Hari Bhakti Vilas’, and based on the text by Roop Goswamiji of the Vrindavan tradition. Bhakti has four aspects by which you can address the Lord – dasya, vatsalya, sakhya and shringara. This was portrayed by Geeta in abhinaya and manodharma, using the techniques of varnan (descriptive) and anavarnan (slow unveiling), which are techniques used in Bharatnatyam. 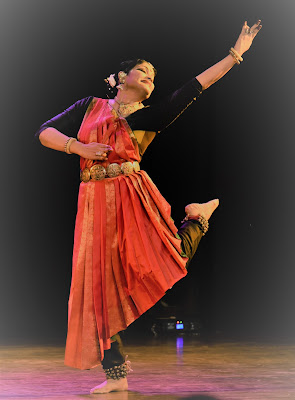 The first piece was a Govinda vandana by Hit Hari Vallabhji in the haveli sangeet tradition. The composition was in raag Mallika, taal Mallika. Lord Vishnu is also Jishnu, who is triumphant and invincible, and Trishnu, who is fearless and victorious. The composition highlighted the aspects of Vishnu godhead, his vishwaroop darshan witnessed by Arjuna on the battlefield of Kurukshetra, where the Lord promises to appear whenever any harm is brought to his bhakts. Geeta appeared in a red costume, depicting the chaturbhuj roop of Lord Vishnu, and Krishna with his flute and a calf. She depicted the Lord’s kamal netra, kamal maal, kamal nabhaye, reclining on the shesha in the sea, kamala ramane. She portrayed the Kans vinash, Keshi Chanur vadh, and then finally, Krishna as Partha sarathi. On the battlefield of Kurukshetra, Arjuna loses his will to fight when he sees his relatives and elders on the opposite side. But Krishna imparts jnana to him. Arjuna is endowed with the darshan of the vishwaroopa of the Lord, with many mouths – vishwakotimukham, several arms and several limbs. The entire universe resides within him. Arjuna is overawed, and picks up his bow and arrow again. The abhinaya by Geetaji left everyone mesmerized. The gravity and grandeur of the piece was contrasted with the lyrical depiction of Krishna’s beauty, describing his lol kundal, gopi jan manorath and venu naad. 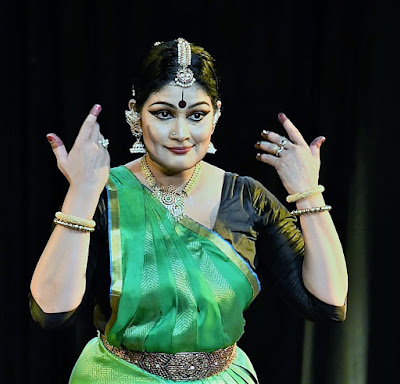 In the annals of bhakti, Meerabai is known for her passion. She had that unmad and masti to meet the Lord. For dasya bhakti, Geetaji used Meerabai’s composition ‘Mane chakar rakho ji’, which I feel is very close to Geetaji’s heart, since she always puts her soul into it. The composition is in raag Mand, and it has been sung by MS Subbalakshmi. Co-incidentally, it was the 100th birth anniversary of MS Amma that day. 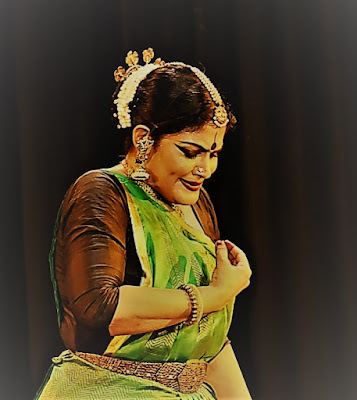 Meerabai describes her desire to serve the Lord, and she expresses her wish to look after a garden for the vihar of Krishna. She wants the flowers to bloom as she waters them, and sing the praises of Radha and Krishna. 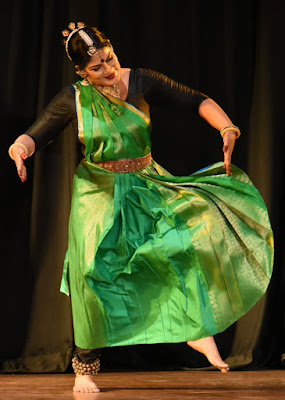 She welcomes all to sing the keertanam with mridangam and cymbals. And the union with the Lord brings her the epiphany in the middle of the night. Geetaji expressed all the satvik bhavas and danced the piece with a lot of abandon and the expression of pleasure. 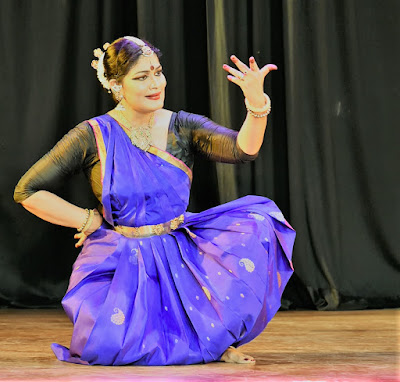 For the next piece, she wore a blue costume or aharyam, depicting vatsalya. In the ashtayam seva of the Lord, there is always a relationship between the bhakt and the Lord, and vatsalya or a mother’s love has given birth to many literary moments. 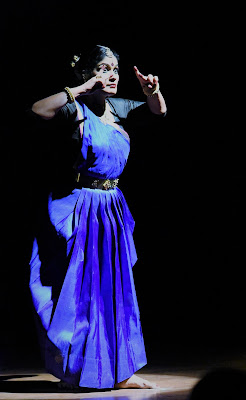 Mother Kaushalya puts baby Ram to sleep and moves away to comb her hair. He gets up and gets her attention, and then she gets him to walk holding his fingers in her hands – ‘Thumak chalat Ram Chandra’ – as the delicate anklets jingle on his feet. The three mothers play with him. Mother Kaushalya wipes his face, puts chandan tilak and kajal. When he gets tired, she carries him on her shoulders and takes him away. The depiction by Geetaji is so realistic that you feel as if in the story she is the  mother. Her depiction has very fine detailing and nuances. 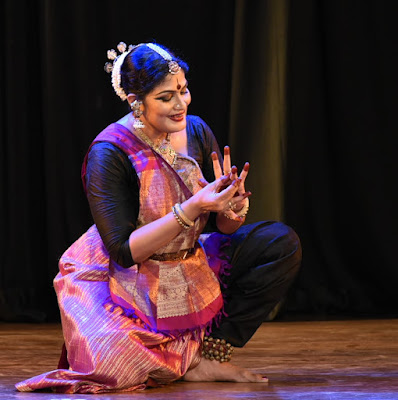 For this bhava – sakhya and shringrara – in bhakti, raas was used in raag Mallika. The composition is by haveli sangeet poet Hit Hari Vansh, which is beautiful poetry as it is. The raas was danced on the full moon night of the month of Kartik, called Sharad Purnima, on the banks of the Yamuna. It represents divinity on earth. Geetaji wore a purple sari for the piece. Raas is expressed in many art forms and in each, it drips with shringara rasa, galvanizing the moment of beauty. 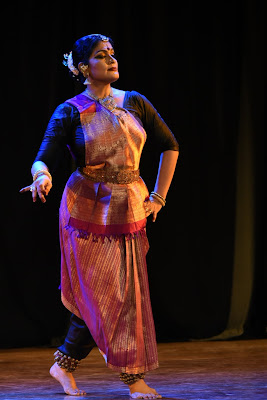 The composition said ‘Khelat raas rasik braj mandal… . While Krishna is like a shyamal tree, the gopis become like a golden beli, which is entwined around him. The winds become scented and sweet as nature listens to the flute of Krishna. The magic spreads and all comes alive. The latas, the lotuses, the birds, Radha and Krishna are entwined with each other in the maharaas. The gopis represent the jiva, who unite with their ishta, Krishna, in a total surrender of their ‘I’. The lyrics have a lot of sensitivity and melody, and the dance by Geetaji was done with a lot of expression, nritta and technique. The rhythm and musicality were all knitted together. A wonderful piece to be performed as a solo.


Last but not the least, Geetaji did a Hanuman mangalam for dasya bhakti. Hanumanji’s bhakti is the ultimate in dasya bhakti, since he stays selflessly in the seva of his swami. He opened his chest to the world to show who lies within. “I started with the navadha vidha bhakti. But then I thought, nine compositions would be too long for the audience. Shravanam, kirtanam, vandanam, sakhyam, dasyam, padasevanam, vatsalya, archanam and atmanivedanam. This is according to the Bhagavatam. But on reading Chaitanya Mahaprabhuji’s literature, I found only four, that is dasya, sakhya, shringara or love and vatsalya. I started rummaging through my compositions and narrowed it down to four compositions, one for each type. I could have done only Krishna pieces, but I wanted to address Vishnu as the godhead. BB Pulaskar’s ‘Thumak chalat Ramchandra’ has stayed with me for a long time, and I needed an opportunity to do it. For shringara and sakhya, raas emerged as the best option and could be knitted with pure dance as well. Raas epitomizes all aspects very beautifully. The process of developing the concept was very enriching and I’m richer now by many compositions, doing my research. When I started doing the vishwaroopa, I had  images of Vishnu, done in calendar art, folk art, in traditional painting, in sculpture. I read the eleventh chapter of the Geeta for many days, and I just couldn’t work, because there, you had everything, the smallest creature to the entire cosmos, within Vishnu. How can you show everything? This is something that can only be realized, but not felt and depicted. Every little aspect is so wonderful. It makes you so humble, that you are nobody and you cannot do everything. To unwind, I was watching Animal Planet, and there too, I saw the miracles of nature, the vishwaroopa. My girls chided me and asked me to let it go!”
Pics: Anoop Arora
Email Post