A feast of various styles in one evening

Late last month, when Delhi was experiencing a spell of freakishly warm weather, some artistic relief was provided by the National Festival of Creative Arts, held at the IHC and organized by Impresario India. Dramatic tales were told by Rasa United in Bharatnatyam, Chhau and Kuchipudi, depicting stories from mythology choreographed by Vanashree Rao. This was followed by Kathak by Moumala Nayak and her group, titled Baramasa. 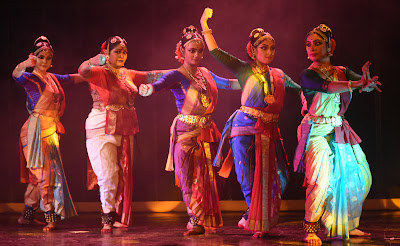 Vanashree Rao is a disciple of Dr Vempati Chinna Satyam and her husband Guru Jayarama Rao. She has been awarded the Sangeet Natak Akademi Award. The first tale she choreographed as a group presentation was from Shivapurana.

Three demons were born to the demon Tarakasura. They did deep tapasya and Brahma had to offer them a boon of immortality. But it was decided that they would be destroyed when they meet in one juncture. Their increasing trouble to the devtas and the cosmos had to be resolved by Shiva. Mahadeva called upon the entire celestial kingdom to give him a huge chariot. Vishwakarma made the chariot with the prithvi as the body of the chariot, the sun and the moon as its wheels, Brahma as the charioteer, Meru as the bow, Vasuki as the rope for the chariot, and Vishnu as the single arrow which would destroy the three demons. 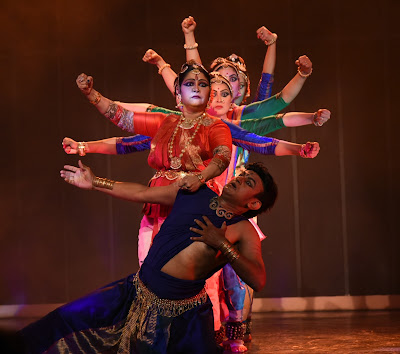 The demons were depicted by Chhau dancers in red costumes, their bodies painted with patterns and golden masks on their faces. They used acrobatics to show the difficult penance, did headstands, leg splits, lifting each other, for the difficult movements. They did a dance with swords and shields. Four Kuchipudi dancers came in colourful costumes which were very aesthetically designed, and did the Shivastuti – ‘Vande Shivam Shankaram’. Depicting the rundamal, jataa mukut, chandra, riding on Nandi with the trishul, the trinetra, agni and damru, with a gait of a warrior - Vanashree Rao essayed the role of Shiva. The four dancers made a chariot and Shiva vanquished the three demons with a single arrow to the chants of ‘Sureshavam jatadharam’. The music was very innovative. The Chhau done by the three ‘demons’ was very impressive, and the nritya by the Kuchipudi dancers was well-rendered. 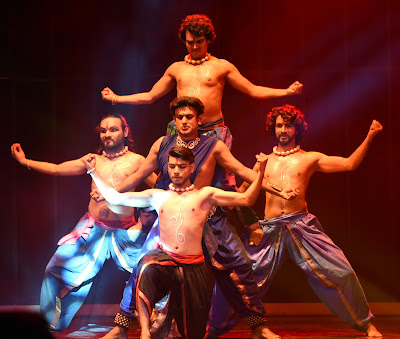 The second piece was mesmerizing, since Dr S Vasudevan, who is usually seen as a vocalist on the panel of musicians, was the main performer himself. His tall, fit frame was overawing – it was an old composition by Vempati Chinna Satyam, Ananda Tandavam Adi. It is about the beautiful cosmic dance of Shiva. The composition says that the devotees are mesmerized and are enjoying the dance by the lord. The Kuchipudi portions were choreographed by Vanashree Rao, and the Bharatnatyam element was by Dr Vasudevan. He depicted the stances of Shiva with damru and agni, the Ganga on his matted locks, Nandi, his steed, the moon on his forehead, the trishul and trinetra. Shiva is the prakriti moolam, prathamanadam (the sound from the damru) and bhuvanamoolam. He is the one who drinks poison from the churning of the oceans. Dr Vasudevan’s nritta had precision, energy and pace. In Bharatnatyam and Kuchipudi, there was a duet, with Parvati detailing the contrasting features of the two as Shiva and Shakti. 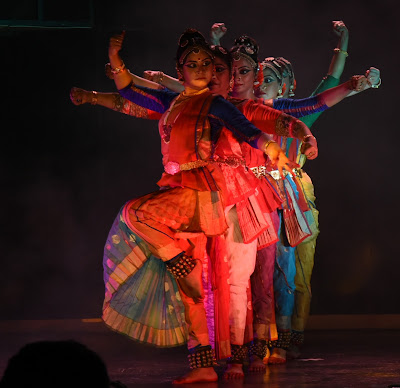 Next was fast-paced nritta to the jathis. This nritta could not have been rendered with more versatility than Dr Vasudevan displayed. He took stances and various movements with leaps – it was an excellent performance. 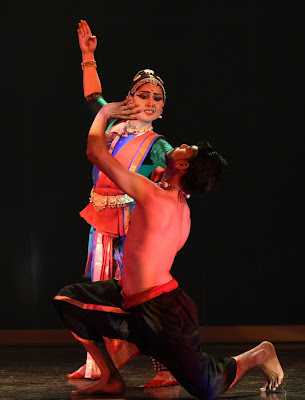 The final performance by the group was so gripping that it received a standing ovation. Mahishasura Mardini, as Vanashreeji announced, was inspired by a song sung by Pt Jasraj at a live concert. As the tale goes, Mahishasura was a demon who tormented prithvilok and devalok, so the trinity, Brahma, Vishnu and Mahadeva, got together to create goddess Durga or Mahamaya. It was with their energy that they created the goddess to fight the demon. Vishnu gave her the chakra, Shiva the trishul, Brahma, the kamandal, Indra, the vajra and Airawat, the white elephant, gave her the ghanta, Himalaya gave the lion, Varna gave her the shankh, Vayu gave the dhanush-baan, Kaal, the khadag, Vishwakarma, the pharsa and Sheshnag, the chhatra. ‘Ya devi sarvabhuteshu’ – she is known to be eight-armed and very beautiful. The demon Mahishasura is like a buffalo. 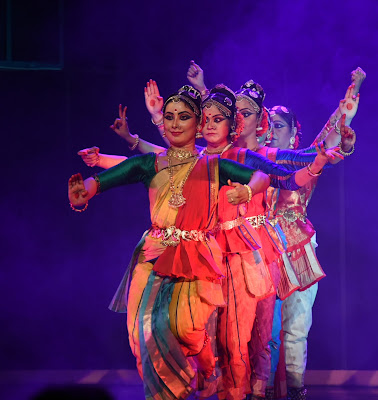 The composition was in raag Mallika, aditalam. The Chhau dancers accompanied Dr Vasudevan as the demons in black costumes. They made formations standing one on top of the other, and did headstands on each other’s backs. The terrorized people and the devtas get together to perform a havan. Durga is born and the devatas endow her with their weapons – the Kuchipudi dancers, along with Vanashree Rao as the devi, made the formations of eight-armed Durga, standing one behind the other. Her beauty and ornamentation was depicted – the cummerbund, earrings, her being worshipped as the ‘dusht vinashini, paap-vibhanjani, durge durg vinashini, Mahishasuramardini, shailsute’. 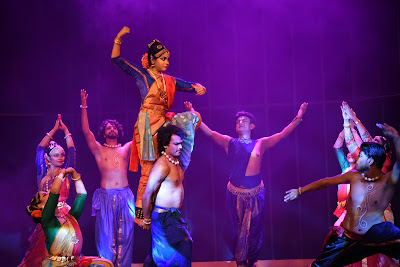 As the performance reached its pinnacle, the final stances taken were that of Durga holding the trishul pointed at Mahishasura lying down, riding on her lion, and then as the performance progressed into an aarti, one of the Kuchipudi dancers was lifted by a Chhau dancer on his hands. The entire production – music, choreography, costumes, lighting – was a visual treat. In fact, each dancer has to be commended for his or her energy, technique and excellence. 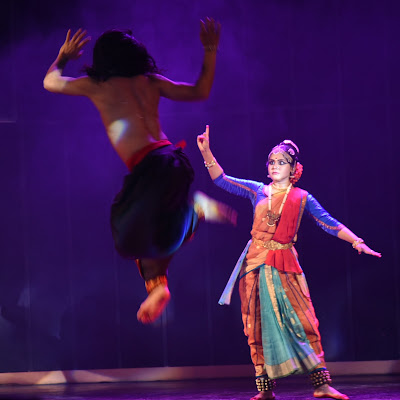 Later, discussing the choreography, Vanashree Rao said, “I chose Bharatnatyam for Ananda Tandavam because it is a codified dance, and the best form to depict this form of composition. Since we had to tell the tale of Durga’s avatar, we chose Kuchipudi, and Mahishasura and the demons, the style used was Bharatnatyam and Chhau.” 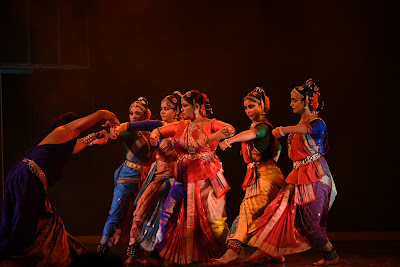 Vanashreeji had designed the costumes for the Kuchipudi dancers, and she mentioned that the fabrics usually used for Kuchipudi dancers are so bright that in very bright light in summers, they are not very soothing. So she used Chanderi in soft colours for their costumes, which actually did look very aesthetic. Sandhya Raman had designed the costumes for the other dancers, with innovative pleats.
On the music, Vanashree Rao said, “I had something definite in mind, and I gave my inputs – the excellent musicians created the music.” Musicians: K Venkateswaran and Dr S Vasudevan – vocals, nattuvangam – Dr Vasudevan, mridangam, khol, pakhawaj, tabla, octopad and other percussion – R Keshavan, violin – Master Raghavendra, flute – Rajat Prasanna.
--

Kathak dancer Moumala Nayak is a disciple of Pt Birju Maharaj. She has been awarded the Sangeet Kala Ratna and the merit scholarship by Kathak Kendra. She has been performing in India and abroad for many years.

Baramasa was a group choreography in Kathak. Baramasa poetry is a tradition that can be traced back to the classical epochs, and it depicts the swings in the mood of the heroine as she is going through the agony of separation from her beloved, according to the changes in nature that occur through the lunar months of the Hindu calendar. Jayasi’s Padmawat has one of the first instances of this in Hindi, and Guru Nanak’s composition, the first known instance in Punjabi, makes it a spiritual presentation by making the human soul the woman, and the lord, the lover from whom she is separated. 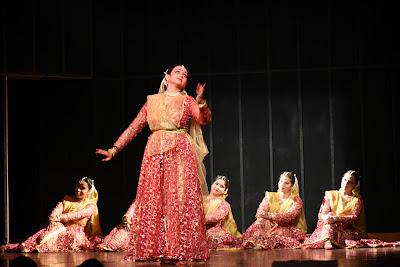 According to Moumala, “Baramasa reflects the never-ending cycle of separation, longing and merger with the Almighty. Departing from the concept of semi-classical bandishes, like Kajri, Chaiti, Sawani etc, generally sung in Baramasa, we made an attempt to assemble typical classical bandishes in twelve different ragas – Jog, Shri, Bilaskhani Todi, Gaudmalhaar, Sur malhaar, Desh, Vrindawani Sarang, Bihag, Darbari, Basant, Kafi, Shudh Sarang with a hint of Puria Kalyaan – set to different talas – teentaal, aada choutaal, rupak, choutaal, ektaal and deepchandi – merging them with the ongoing mood of that specific month of the year.” She dedicated the spirit of her performance to World Poetry Day and World Forest Day, which were around the same date. 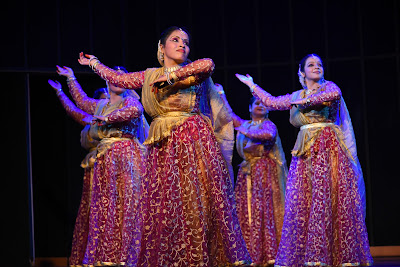 Baisakh: It is the harvest month, the flowers are blooming and the bees are hovering over them. The composition used was ‘Sajan more ghar aaye, mangal gavo, chauk purao’. The beloved, who had been travelling, is back. The group used toda and tihais for the depiction.

Jeshtha: It is the summer month. The fire of heat burns, so the nayika tells her beloved not to leave during this hot season, since all the creatures are wilting. The composition used was ‘Lagan lagayi’, and the dancers used chakkars.

Ashadha: Another month of intense heat. Even the birds do not leave their nests. So the nayika pleads, ‘Please don’t leave’. The composition was ‘Viraha ki maari raen jagi’, using thaat and aamad.

Sravan: It is the month when relief from the heat begins with the monsoon. The streams start flowing, the peacocks dance, and the thunderstorms bring lightning. The composition used was ‘Ritu aayi badariya’. The abhinaya depicted frolicking in the rains and the peacocks dancing.

Bhadon: The rain continues to pour. Storms are caused by torrential rains, and the days are dark. The scared nayika pleads with her husband, ‘Do not leave’. The composition used was ‘Garaj garaj aaye badarva’, and the dancers used tihais. 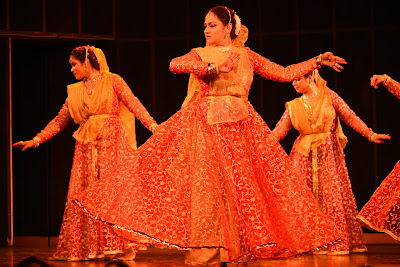 Asvina: The sky becomes clear, and the lotuses are abloom in the ponds. The nayika enquires again, ‘Why leave now?’ ‘Noopur baje jhoolat naval kishor’ – this was a Bindadin Maharaj composition, and the dancers used footwork and chakkars.

Kartika: The sky is clean and the moon bright and beautiful. The month is full of joy, worship and holy baths. So the nayika puts requests her beloved, ‘Please don’t leave’. The composition was ‘Rang de manva baana’, using gat.

Agahana: The flowers are blooming and swans are seen on the banks of rivers, so please don’t leave, the nayika tells her beloved. ‘Aaj hoke aayi pyaari’ was the composition used, and the choreography featured footwork and tihais.

Pausha: The weather has the nip of cold, days are becoming shorter, and the nayika says, ‘Since it is cold, please don’t leave’. ‘Nayan su nayan milavo re balam’ was the composition used, and the dancers used paran.

Magh: The spring has arrived – the peacocks are dancing and the papiha (the hawk-cuckoo) is calling, ‘so please don’t leave’. ‘Mori chunari basanti ranga re piya’ was the composition used.

Phagun: It is the month of Holi and the fragrance of flowers is everywhere. Since everybody is making merry, don’t leave, the nayika tells her beloved. ‘Main toh khelungi unhi se hori guinya’ was the composition used. The dancers depicted scenes from Holi using footwork.

Chaitra: The trees are dressed in new leaves. It is the month of joy and connecting to the divine. As the seasons are cyclic, so is life. The dancers used footwork, paran and chakkars.

The entire production was without an interval, using multimedia in the background to show the seasons. The technique was good, and the concept was a much-visited one and well-interpreted, though at times there was a slip in the coordination. If the effort had been made to either to  vary the lighting or the costumes of the dancers according to the seasons, it would have added more colour to the production.