The melody of the murali remembers Dr M Balamuralikrishna 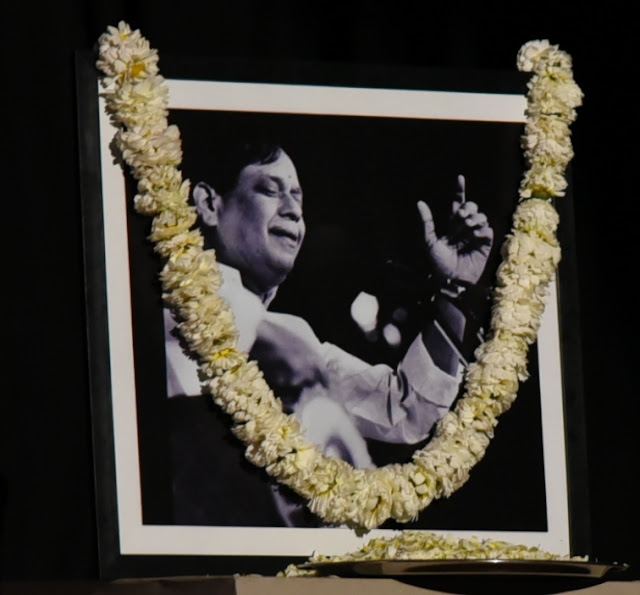 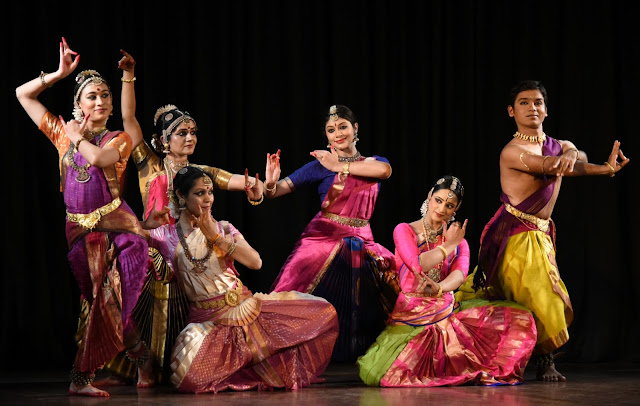 This cool evening in Delhi in January was dedicated to the legendary M Balamuralikrishna, who recently passed away. The programme was held at IIC. Usha RK, the oganiser, spoke with a very informal and personal tone to the audience, narrating a biography of Balamuraliji. Mangalampalli Balamuralikrishna (July 9, 1930 – November 22, 2016) was a world-famous Indian Carnatic vocalist, musician, multi-instrumentalist, playback singer, composer and character actor. Among his awards are the Sangeet Natak Akademi (1975), the Padma Vibhushan (1991), the Sangeetha Kalanidhi (1978) and the Sangeet Kalasikhamani (1991). His greatest contribution to Bharatanatyam has been the composition of tillanas, of which he composed around 12. Six of these were performed this evening.

The tillana is a rhythmic piece in Carnatic music, generally performed at the end of a concert, and widely used in the classical Indian dance margam. Tala-like phrases are used in the pallavi, and lyrics in the charnam – somewhat equivalent to the Hindustani tarana. It involves complex movement of the eyes, the neck, footwork and handwork.
Sudha Raghuraman, the famous Carnatic vocalist, entered the stage, singing Omkarakarini, paying a floral tribute to the guru. The composition, one of his favourites, was in raga Lavangi, aditalam. Sudha can weave magic with her voice. 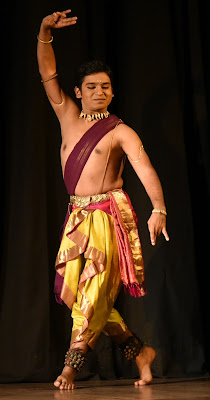 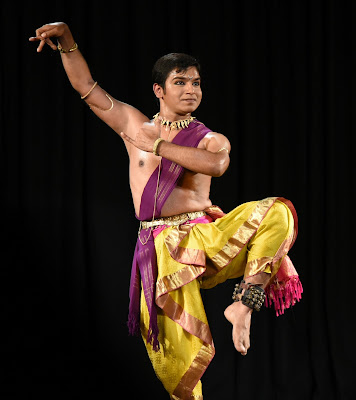 The first tillana by Himanshu Srivastava, disciple of Guru Saroja and Rama Vaidyanathan, was in raga Ahir Bhairav – ‘Manjul mohan murali ravali, raga vallari manoranjit’. Himanshu’s rendition of the tillana started with a pranam to all the musicians, during which he symbolically borrowed the flute from the flautist, G Raghuraman. In the choreography, Krishna is depicted as looking at the mirror and adjusting his morpankh. The music from the flute mesmerizes everyone. Himanshu’s precise hand and foot movements were noteworthy. He did a peacock walk and some leaps with a lot of agility. He said that his interpretation had some masculine features, which he used to his benefit as he was the only male dancer in the evening’s lineup. Finally he returned the flute to the musician. 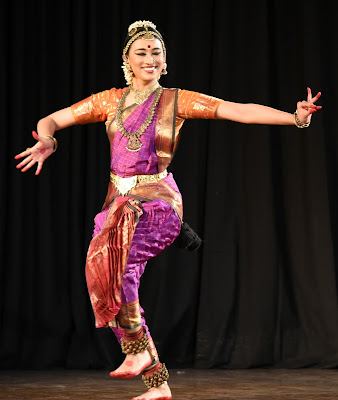 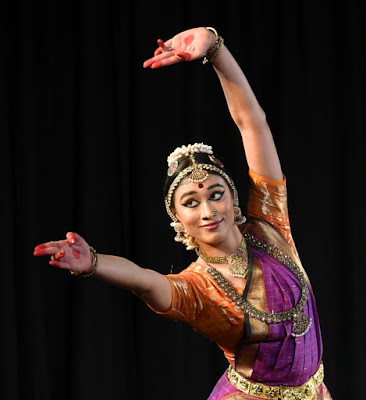 The next tillana was in raag Kadanakuthoohalam. The words were ‘Vadana maade virisene aadhara maade,’ which means that Krishna has a face like a blossom, beautiful lips, so please oh Krishna, who is like Madana, come to me soon. It was rendered by Shreyasi Gopinath, presently a disciple of Jamuna Krishnan and Saroja Vaidyanathan. Shreyasi was quite graceful and lissome. Her nritta was very strong, with neck and eye movements and stretches. 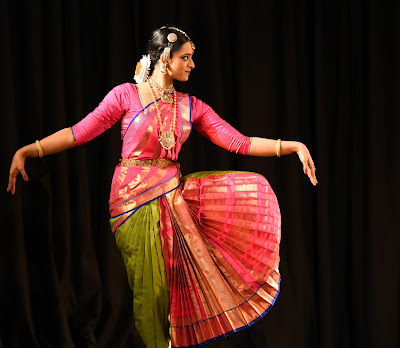 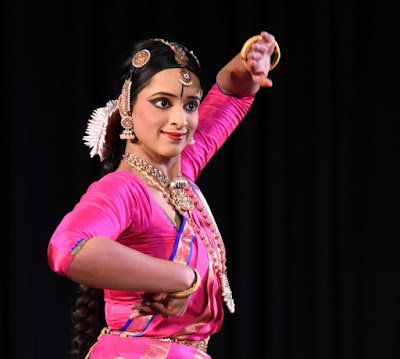 Talking fondly about Balamuraliji, Usha said that he started training at the age of 6 and a half years, and at the age of 8, he gave a full-fledged concert - and since then, he had given 25,000 concerts. The next tillana was in raag Vrindavani. This is a raag which evokes images of Vrindavan and the play of Radha and Krishna. The words were ‘Soga sulluru hoyalu miri nidari jeritini…’ It says that as there is no difference between milk and water when they’re mixed, the entire universe is so enthralled by the notes of the flute that individual identities dissolve. Even a small note is like honey. Murali madhuri is madhuram. It was performed by Radhika Kathal, who is a disciple of Guru Geeta Chandran. Radhika is a dancer whose nritta is very powerful. Her neck and eye movements and her balancing stances were rendered with a lot of grace, the squatting stances and footwork were performed at a fast pace and her abhinaya too had a lot of grace. “It is a very lyrical tillana and all the movements have a lot of musicality about them,” said Radhika. 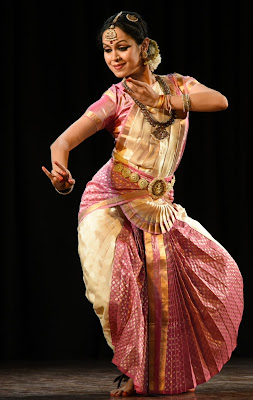 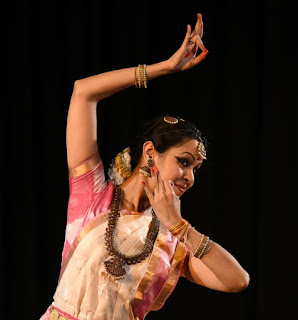 Continuing with her biographical note on Balamuraliji, Usha said that by the age of 15, he had mastered all the 72 melakartha ragas. He could play the khanjira, the violin and the mridangam. The next tillana was in raag Mallika. The words were ‘Nava nava sundara vilasita shashimukha…’ – a beautiful full moon is smiling, and Krishna, who is the master of all arts, brings joy to all ears through his music. Nobody is comparable to him. Arupa Lahiry, a disciple of Chitra Visweswaran, rendered the tillana. Arupa too is emerging as a very mature dancer. Her neck and eye movements had a different rhythm and pattern. Her leg stretches and footwork were excellent. Her evocative and delicate abhinaya depicted the moon being watched by the chakor and Krishna by his cows. Her slender hands did beautiful formations for the flute. Feminine movements were represented by alternating movements for a flute with those of a ghunghat. She said, “It was a challenge and I wanted to approach it in a different manner, bringing in the masculine and feminine energy. The moon and the moonlight represent everything that is beautiful and romantic, so Krishna is compared to the moon, and I thought of juxtaposing the two. Plus, there was great camaraderie among us dancers in coming together for this production.” 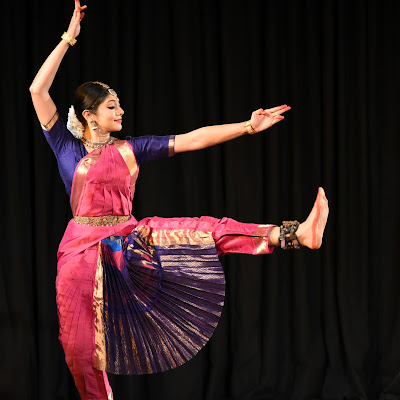 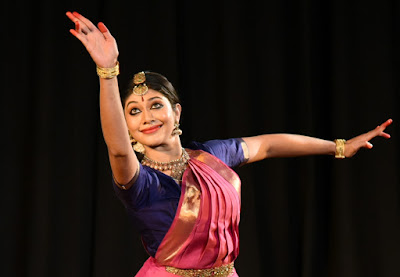 In one of the next of her interspersed notes on ‘Balamurali sir’, Usha said that he was a non-conformist, a creative artist. In Walk The Talk, he told Shekhar Gupta, “I never touched the basics of any raag. I simply created, and everybody is free to do that.” The next tillana was in raag Dwijavanti. In the charnam, in Tamil, it says ‘Murali tillana isaikka viyakum valam,’ which means ‘the music of the murali mesmerises me. I feel like dancing with you.’ Dakshina Vaidyanathan Baghel, a disciple of Saroja and Rama Vaidyanathan, performed the tillana. The nritta had graceful neck and eye movements, and the stretches and leg lifts were complete and powerful. The expressions in the charnam were wonderful, as Dakshina took the stance for Krishna, holding the bansuri. Dakshina too has evolved as a very graceful dancer, with almost lyrical movements. She said, “Balamurali sir is a great Carnatic musician, and the tillana is his greatest contribution to Bharatanatyam. And it was awesome to have young Bharatanatyam dancers paying tribute to him. Kudos to Ushaji.”

The production featured MV Chandrasekhar on the mridangam, and Sudha Raghuraman on the vocals was excellent. The production would have been incomplete without the flute by G Raghuraman, as entire compositions were woven around the murali nattuvangam by S. Shankar.
Pics: Anoop Arora
Email Post