On a pleasant November evening last year, Radhika Kathal gave a Bharatanatyam recital in Delhi. Radhika is a young dancer, a senior disciple of Guru Geeta Chandran and also one of the senior dancers of her Natya Vriksha Dance Company. She is a recipient of a junior diploma from the Prayag Sangeet Samiti, Allahabad, in both Hindustani vocal music and Bharatanatyam. She is a recipient of ‘Scholarship to Young Artist’ from the Ministry of Culture. Both an accomplished dancer and a musician, Radhika, who provided both live and recorded vocals for the production Anekanta, is currently pursuing her Masters in music from the Faculty of Music and Fine Arts, Delhi University. 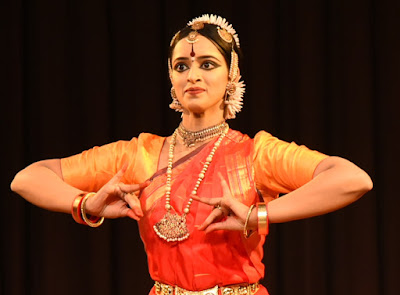 She began her performance with a prayer to Lord Ganesha, ‘Shri Mahaganapatim Bhaje’. The Lord is worshipped as the remover of all obstacles –vighnanashakam. This was followed by a mallari in ragam Hamsadhwani. The shlokam by Kalidasa was in ragam Ranjani. The poet seeks the benign grace of the goddess, who is more radiant than the emerald. She resides in the kadamba forest, and her eyes are radiant the like the neelotpala (blue lotus). She revels in music and is roused by the notes of Shukra, the green parrot. Radhika, through nritya, depicted the attributes of the goddess, her kind look (kataksh) as Kalyani, lotus-eyed, the musical instruments she rejoices in and her companion, the parrot. Radhika’s dancing had pace and her movements covered the stage. There were squats and stretches and one-legged stances as well. 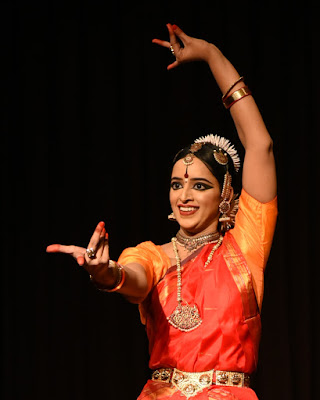 The varnam Radhika presented is one of the most lyrical varnams in ragam Behag by Sh. T. R. Subramanium. It describes Lord Krishna with his lotus eyes and his exploits in Vrindavan. ‘Vanajaksha ninne namati,’ says the poet – ‘oh lotus-eyed one, I trust you immensely. Will you bless me with your divine blessings, you who the sages of centuries and aeons have glorified? My being, heart and bhakti belongs to you. Your beauty has no comparison, even a thousand cupids fall short of your dazzle.’ The depiction is of Krishna playing the flute, with the morpankh on his head. The animals and birds look at his lotus eyes and lotus face as he roams in Vrindavan. But the animals start dying after drinking the water of the Yamuna, which has been polluted by the Kaliya Nag. Krishna comes to the banks with his friends to play with the ball, but as the ball falls into the river, he hands over his flute and ties his pitambar to jump into the river and vanquish the Kaliya Nag. The Lord dances on its hood after conquering it, and again, the birds and animals admire him as he plays the flute. The bhakta bows at his lotus feet. The varnam was executed by Radhika with very powerful dancing as her nritta has a lot of pace and energy. The nritya portion was also rendered well. 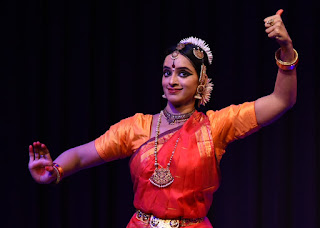 Radhika performed three different padams that day. The first was a Meera bhajan, the music for which was composed by Vinay Chandra Maudgalya – ‘Koi kahiyo re’. The Meera bhajan has lyrics which are laden with viraha or pain, showing the helplessness of separation. The bhakta is pining to meet the Lord, whom she hasn’t heard from. Radhika’s abhinaya portrayed the viraha or the pain and the anticipation as the bhakta waits for Krishna. 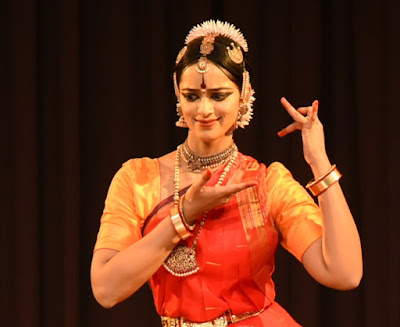 The next padam is from the colloquial tradition of Bharatanatyam, taught by Geetaji’s guru Smt. Swarna Saraswathi. The heroine says to her maid, ‘Don’t blame the other woman. It is my lord’s fault that he has gone to her. The other woman was nothing. Now she is a maharani, who stays near my house in a palace, but don’t blame her.’ It was a pure abhinaya piece, where the nayika is stringing flowers and doing her hair while she is talking to the maid. 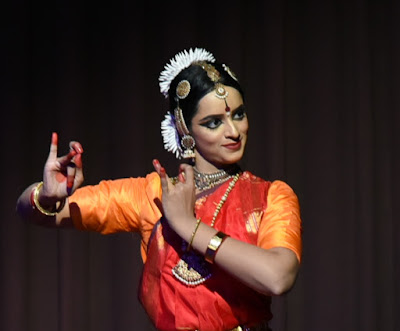 The third padam was a ninda stuti, a conversation between Parvati and her mother. The mother is chiding her daughter, ‘What have you seen in him? He is smeared with vibhuti, has matted locks, the Ganga and the moon on his head. He looks like a beggar when he wears animal skins. What do you see in him? I will get you a better person.’ This padam has an interesting storyline, and the abhinaya by Radhika was also expressive. She ended the performance with Natanam Adinar in adatalam 14 beats. The composition is by Kavi Gopalakrishna Bhaaratiyar, and it describes Shiva dancing in the golden hall at Chidambaram. It was a dynamic presentation by Radhika as she emerged as a very promising dancer. 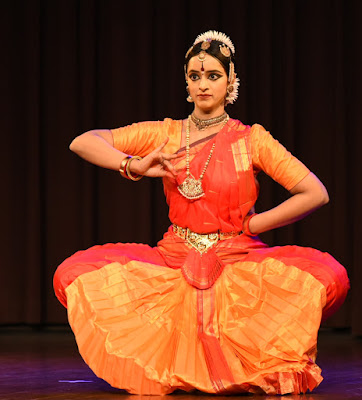 The credits for that evening were: Guru Geeta Chandran on the nattuvangam, K. Venkateshwaran on vocals, M.V.Chandrashekhar on mridangam and Master Raghavendra on the violin. 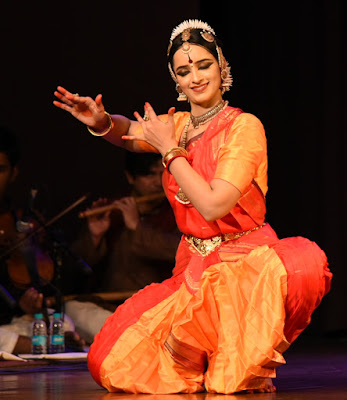