Holi memories in the Delhi summer

With Delhi’s dry heat rising and its summer temperatures well into the 40s now, it seems hard to believe it was spring in the capital not very long ago. The India Habitat Centre’s Holi-themed event takes places annually around the time of the festival, and that spring evening had suddenly turned breezy. The lawns had coloured cloths hanging from trees, and these colours formed a backdrop for the stage, which had a straw hut and a lamp to give it a rustic look. The bolsters on the charpoys were also coloured. But the food and drinks being offered gave the entire performance an informal air, with people passing by in front of the stage. It appeared a little unfair to the performers. The food could have waited.

Vidya Shah started the recital with a song on Holi, ‘Bahut dinan ke baad Shyam sang hori main khelungi, pitambar nilambar honge, aisa rang rangungi’ (I’ll play Holi with Shyam after a long wait, the blue and yellow of our clothes will be coloured by the colours). The next song was ‘Aaj galiyan mein dhoom machayi, Hori aayi re’ (Holi is here, and we will celebrate in the streets). Both songs were appropriate for capturing the spirit of the festival of colours and the playfulness associated with it.

The third composition was by Amir Khusrau, and it captures the essence of Sufi philosophy, where the bhakta wants to be drenched in the colour of his pritam (beloved) or the Lord. Next was the Surdas pad, ‘Tum chalo sabaye jaaye khelat horiyan’ (Let’s all go and celebrate Holi), and it presented the spirit of Holi in Vrindavan. In both compositions, Vidya used aalap and modulations.


The next piece was replete with old world charm, a reminder of the times when the LP records were released, and as children, we would listen to Mallika Pukhraj - ‘Lo phir basant aayi’ (Spring is here again). The lyrics describe the beauty of nature in the spring and the rendition was impressive, with all the ups and downs of the music. The next composition was a dadra, ‘Kije gaman bhavan mein Vrishubhanu ki dulari’ (Radha is being requested to arrive amid the blooms of the spring).

Following these was a thumri in raag Kafi, ‘Mope aiso rang jheena daro’ (throw only a little colour on me). Vidya certainly has the style to capture the hearts of the audience. This was followed by ‘Phir kabahu na hoye maili chunariya’, where the poet asks to be drenched in colours that never fade, implying the colours of bhakti. Finally, Vidya sung a chaiti with the exuberance of the Holi spirit, ‘Rangi saari gulabi chunariya re, mohe maare najariya sanwariya re’ (My lover is looking at me with love, having coloured my clothes red), wrapping up the evening with ‘Aaj biraj mein Hori re rasiya’ (It’s Holi in Vrindavan today). The audience really experienced the naughtiness and fun that is associated with the festival of Holi.

Kathak by Kathak Kendra
Next, the Kathak Kendra presented a production titled ‘Hori dhoom machori’ (it’s the celebration of Holi). Kathak Kendra is the National Institute of Kathak Dance dedicated to promoting the practice, development and awareness of Kathak. Sushmita Ghosh is the present director of Kathak Kendra, New Delhi. 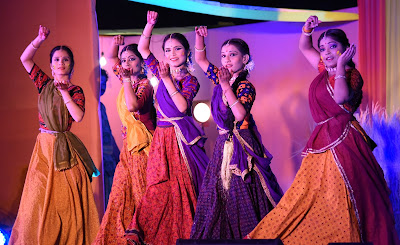 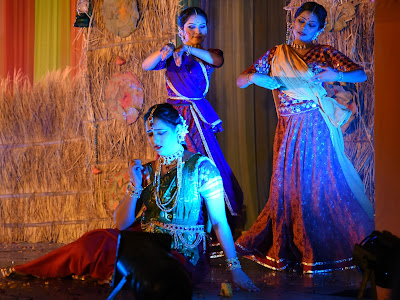 The narrative starts with Vrindavan, where Holi is being played by sakhas and sakhis. Radha is dressing up in her palace as she waits to play Holi. As Krishna does not appear, she is disappointed. ‘Phoolan mein, beli mein, ali mein, pik mein’ (in the flowes, vines, in the bumblebees and the koels), she is looking for her beloved everywhere and in everything. Krishna, on the other hand, is caught by the sakhis and with his hands tied up, is dressed as a woman with odhni and ornaments. Radha is initially annoyed to see him like that, but finally is appeased - ‘Dekho Hori ke khilaiya kaise ban aaye’ (He who plays Holi, look at how he’s looking). This was followed by dynamic group dances with drums called daph, dandiya, and finally, playing Holi with flowers and gulal. 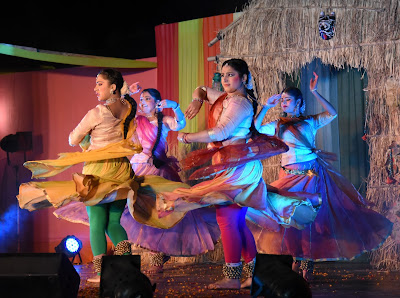 The group choreographies were well rendered using nritta and nritya. Pandit Jaikishan Maharaj said that the dancers understand his language of dance and successfully present what he is trying to teach them. His son was dancing the part of Krishna in the production. The fun in the choreography came through in the pace of the dance. The frolic of the festival was presented by making boys dress up as girls and introducing one weird character with funny attributes, in the true tradition of raas in Vrindavan. There were a few glimpses of the lath-maar holi of Barsana. And yet, the technique of Kathak was maintained in the choreography. 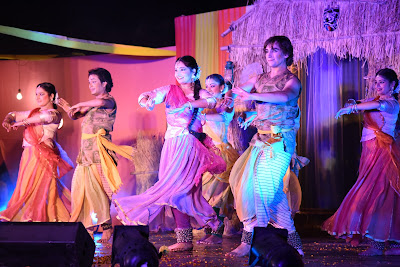 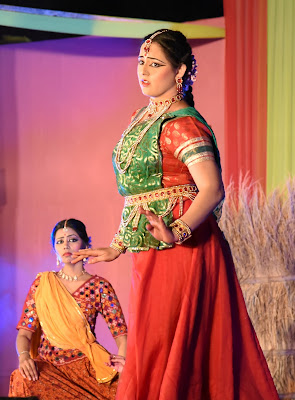