It was a befitting way to celebrate the arrival of the new year - an evening of dance and music was held the India Habitat Centre in Delhi recently.

The evening began with the lighting of the lamp by Shri Rajendra Prasanna. The first recital was by the trio - Rajesh Prasanna on the flute, Ahsaan Ali on the sarangi and Amaan Ali on the tabla. They were accompanied by Kamlesh Anand on tanpura. The composition was in Raag Yaman, Roopak Taal. The melancholy notes of the sarangi were reminiscent of the sounds of the desert. The warmth of the music made one forget the chill of the Delhi winter.

Next, Mahua Mukherji sang a composition in Bageshwari - ‘Piya nahi poochhat bat’ (My beloved doesn’t ask after me). She was accompanied by Pt Ashish Sen on the tabla, Prabhakar Dhagle on violin and Paromita Mukherji on the harmonium.

And finally, the last performance of the evening was Shri Rajendra Gangani’s Kathak recital. Rajendra Ji is the disciple and son of Shri Kundanlal Gangani. He has graduated from the Kathak Kendra. He has been awarded the Shastriya Natya Shiromani and the Sangeet Natak Award by the late President APJ Abdul Kalam. He began his performance with a Shiv stuti ‘Maheshwaram, Sureshvaram’, depicting the attributes of Lord Shiva - Ganga on his head, jata (matted hair), tripund, trinetra (third eye), vibhuti (ashes smeared on him), panchabhutam, shashvatam (lives in all times), ending with the depiction of the damru and finally the aarti of the lord. The nritya and nritta had a fast tempo and was immaculate. Rajendra Ji said that the composition was by his collegue Hemaji. 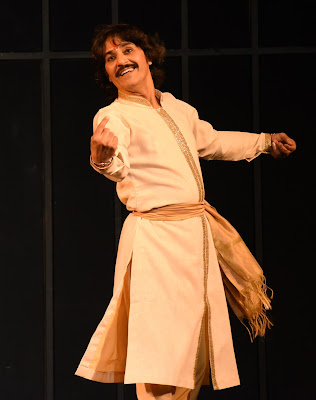 For the technical part, he did a few pieces in teen taal, tatkaar, that pairon ki uthaan, gat, twisting and shifting of feet and chakkars at great speed. He performed a Ganesh Paran taught by his father, depicting the swaying trunk. Tabla pieces by Fateh Singh Gangani are always electrifying. And then he demonstrated how a tihai mimics football - the dodging of the ball, leaping forward and backward and then scoring a goal, followed by a few more tihais. 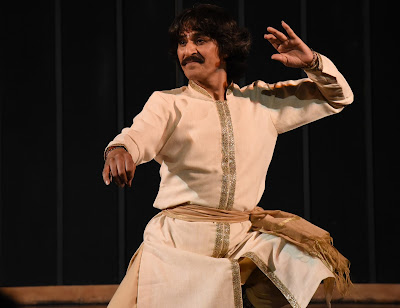 Next, he performed an abhinaya piece on a Surdas pad – ‘Guru bin aiso kaun kare’. The poem says that the guru gives you an identity, a mala, tilak – ‘Manohar bana, lai sir chhatra dhare’ (The guru gives you the robes of religion, a roof over your head). But the real miracle lies in the fact that the guru can retrieve from the bhavasagar in a minute – ‘kshan me le ubhare’. All the energy of the previous pieces was transformed into expressive ability. The poetry was rendered with a lot of emotion. Gangani Ji was transformed into a disciple who is in awe of his Guru, washing his feet and drinking the charanamrit. This was followed by a toda and then jugalbandi between the footwork and the tabla. It ended in the shivering of feet and the tinkling of the ghunghroos. The footwork and the tabla matched the tempo and created sheer magic.

The evening’s accompanying artistes were Vijay Parihar on vocals, Nafeez Ahmed on sarangi, bol and padhant by Yogendra Gangani and tabla by Fateh Singh Gangani. All the Ganganis were, as they always are, entirely inspiring - it’s either the name or the DNA of the Ganganis that has been blessed with such immense talent in music and dance!