The 9th Delhi International Arts Festival was organized by the Prasidhha foundation under Pratibha Prahlad. The festival opened on the 16th of October and continued till the 31st of October at various venues across the city. It is an extravaganza of music and dance, which includes folk dance, world music, bands, percussion and choral music, a theatre festival, a film festival, a children’s film festival and a world arts festival. It provides a great platform for young artists. Prahlad is a celebrated Bharatanatyam dancer, teacher and choreographer. The logo for the festival is artistically imaginative, almost like the ashtabhuji Durga holding various weapons in her hands. 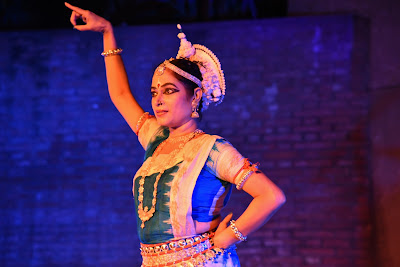 When we reached the venue on one of the days, a band of youngsters was rehearsing for the final event. It was fun watching them rehearse. The first to perform that day was Vani Madhav who  is an Odissi dancer from Odisha. She is a disciple of the late Guru Deba Prasad’s lineage through Gajendra Panda and Guru Sudhakar Sahu. She presented the Jagannnath Ashtakam. It is an ode to Lord Jagannath, who resides with his brother and sister near the ocean in Puri. After the pushpanjali, Vani depicted the attributes of Lord Krishna – venu, sheesh piccha (the peacock feather), the lotus face and lotus eyes, riding the rath, daya sindhu (ocean of kindness), with Radha by his side. Vani had fluent graceful movements, but the dance space was very informal, with the band’s drums in the background. The floor too was very harsh on the dancer’s feet, and the time allotted to her was quite less.

Next, it was a Bharatanatyam group performance by the disciples of Kanaka Sudhakar. Guru Kanaka Sudhakar is a well-known exponent of Bharatanatyam and Kuchipudi. She is the disciple of Guru VP and Shanta Dhananjayans, Guru Sadashivam and Guru Kalanidhi Narayanan. She has performed extensively in India and abroad, and has many awards to her credit. 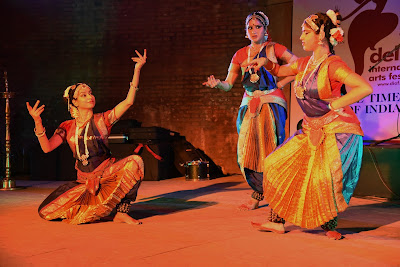 Her disciples performed to Dashavataram, a composition in ragam Tilang, aditalam. It is known as a laghu varnam and is a description of the ten incarnations of Lord Vishnu. After an invocation to Lord Krishna, the group went on to portray, in formations, the Matsya, Koorma, Sukara, Varaha, Narasimha, Vamana, Raghava, Krishna, Buddha and Kalki avatars. The energy of the footwork and very well-rehearsed formations set the formations apart. Aparajita, leading the group, said that it was a result of many years of sadhana. The group finished the performance with the Lord reclining on the Shesha, Lakshmi at his feet and Garuda in attendance. 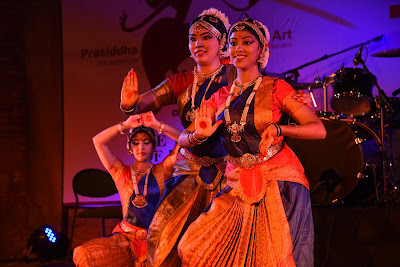