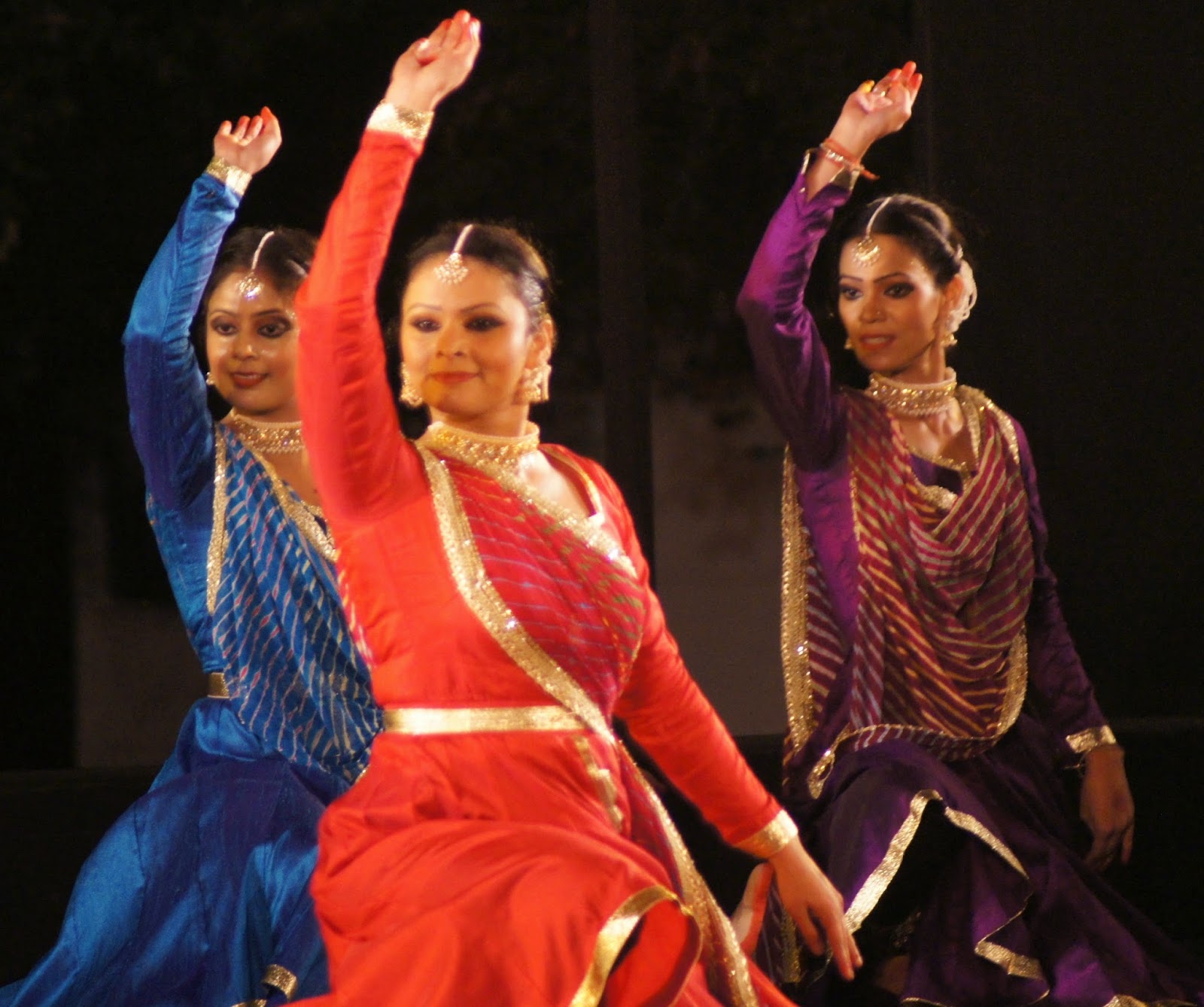 That which is unparalleled, unmatched, beyond comparison, that which cannot be fathomed is truly Ananya .This is the title for the classical dance festival held at the Purana Quila in Delhi in the month of October. A walk through a path flanked by trees, flickering diyas at the entrance to welcome you, and the arches of the lighted old fort to enthrall you, is just the beginning of the experience. The festival is organized by Seher and department of Art, Culture and Languages, Govt. of India.

On the 4th day of the festival, 11th October, Gauri Diwakar and group (Delhi) performed. She is a Kathak dancer par excellence. She started learning Kathak under Smt. Sumita Chowdhary in Jamshedpur. Thereon, she received tutelage from Pt. Birju Maharaj and Jai Kishan Maharaj. She honed her skills under Aditi Mangaldas. In 2008, she was awarded the Ustad Bismillah Khan Yuva Puraskar and is also empanelled with ICCR. 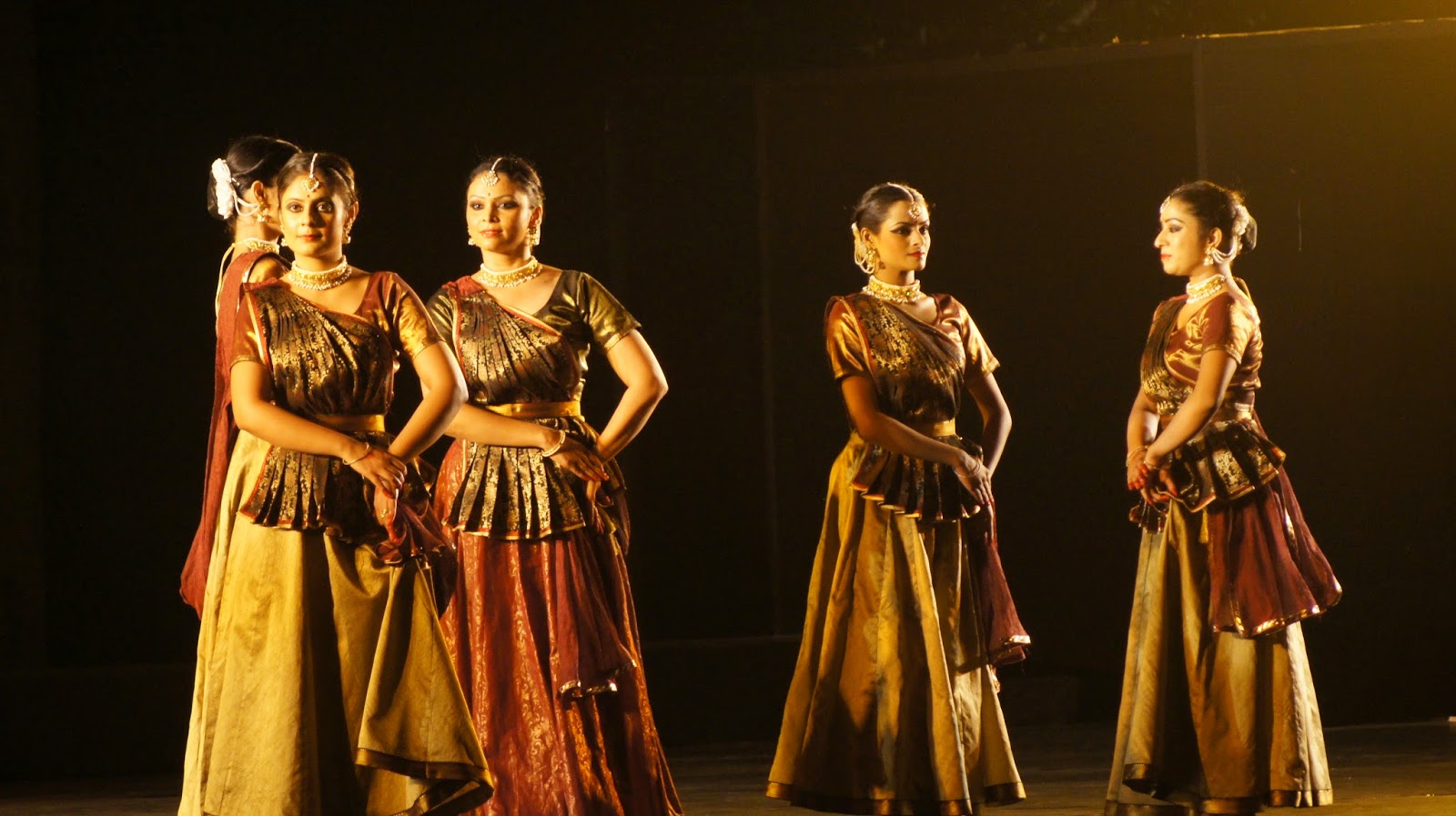 Gauri presented ‘Mugdha’. Mugdha is a woman – a symbol of beauty and truth – as she is beautiful, so is she confident. Gauri said, “The inspiration for this character was Radha. I searched for texts on Radha. Radha is endowed with 35 virtues of beauty and is symbolic of ‘Mugdha’”. Talking about the technical aspects of the performance, she said, “Considering the traditional Kathak repertoire, I had to keep my focus on vilambit, madhyam and dhrut. Vilambit had thaat, amaad, pairon ki uthan and in madhyam, I used parmelu and some brief tihais. In dhrut, which was a tarana, I used gat, tihai, jugalbandi, paran and footwork. So I tried to put in all that I could.” Describing the abhinaya part, she said, “The entire production was in three parts. The first part was about eyes, which can be used to express yourself. Eyes are a medium of communication. Just as bees are attracted towards a flower, people are attracted towards eyes. The eyes express emotions like love, anger and jealousy.” Gauri depicted the piece by showing Radha wearing her ornaments. The focus was on her eyes, which were described as Ratanare, or as if made of precious stones. The eyes were shown to express love, companionship, song, charisma, passion, lust, caring and pride - prembhare, preetbhare, meetbhare, geetbhare, maanbhare, aanbhare, lobhbhare, laadbhare, said the poetry. The dancers compared the eyes to bees, emulating their movements with their hands. 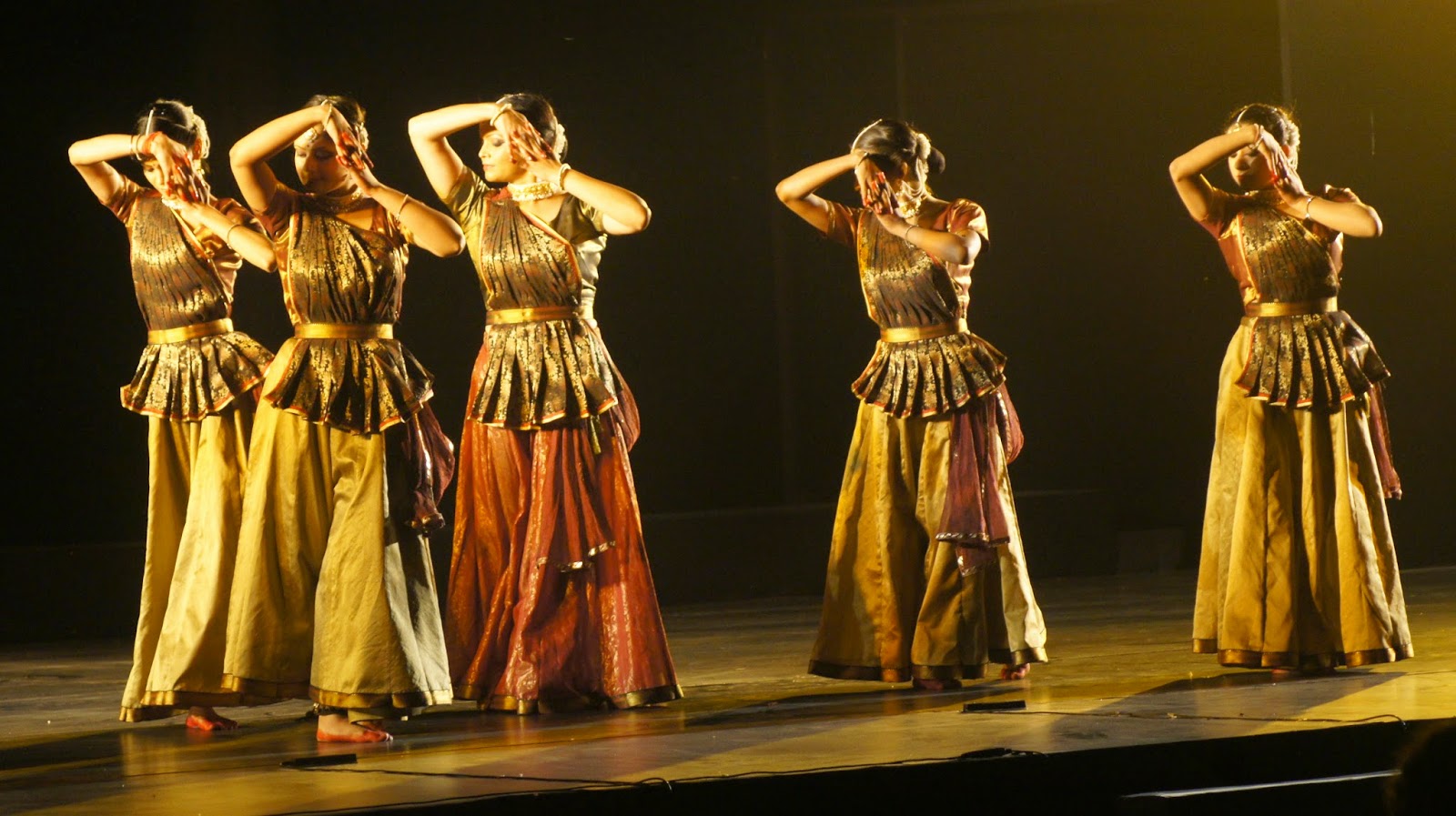 The interlude between the second and third pieces had some melodious flute playing. Continuing to talk about the performance, she said, “The second piece was a solo by me. The beauty of Radha is described from her head to her bust. She is compared to the moon, the zari of her sari, her jewellery, her firm breasts covered by a kanchuki or a blouse, are all shining in the moonlight.” In depicting the piece, the other dancers depicted a deer, a butterfly and a peacock, with some aesthetic dancing. Gauri, as Radha going to meet her lover, Krishna, did some mesmerizing nritya with chakkars. The lyrics described the beauty of Radha, which shames the moon. Sunder sujaan ke milan ko, chand chandni ko kar mand chandra mukhi. 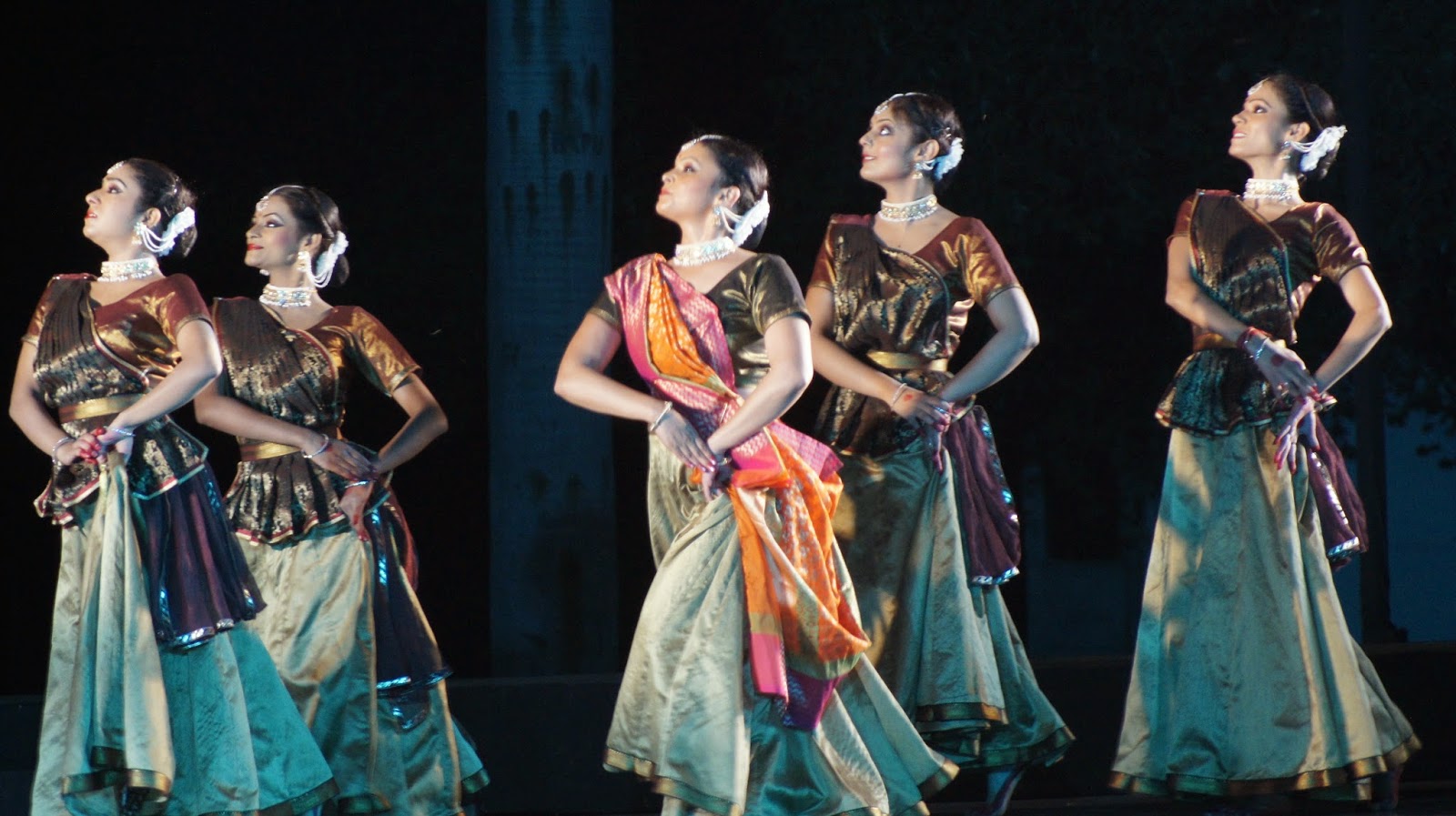 About the third piece, she said, “This part is about her feet, the payal and nupur on them. She is emoting through her feet and her nupur do the talking. This is what we call the aharya abhinaya, in which the jewellery is used as an aid to communication. The text that I have chosen is from the ritikaal of the history of Hindi literature. Ritikaal is criticized for describing women as an object of beauty, but without personality or brains. For me, my heroine is as beautiful within as she is on the outside. The beauty inside is the eternal truth and that is what surfaces to the exterior. In the end, I show Radha as a lotus. During my research, I found a lot of references to Radha being like a lotus. The bees are the attributes of this beauty, which keep hovering around her, but do not meet her. In the end, the lotus closes and all the attributes are assimilated within her.” The dancers came in colorful dresses and their footwork was the main component of this piece. The footwork progressed from slow movement to quick movement and then clapping and tapping. And then finally, Gauri forms the lotus and the rest of the dancers as bees are absorbed within her. The entire performance had completely mesmerizing music, vocals and excellent pakhavaj playing in the background. 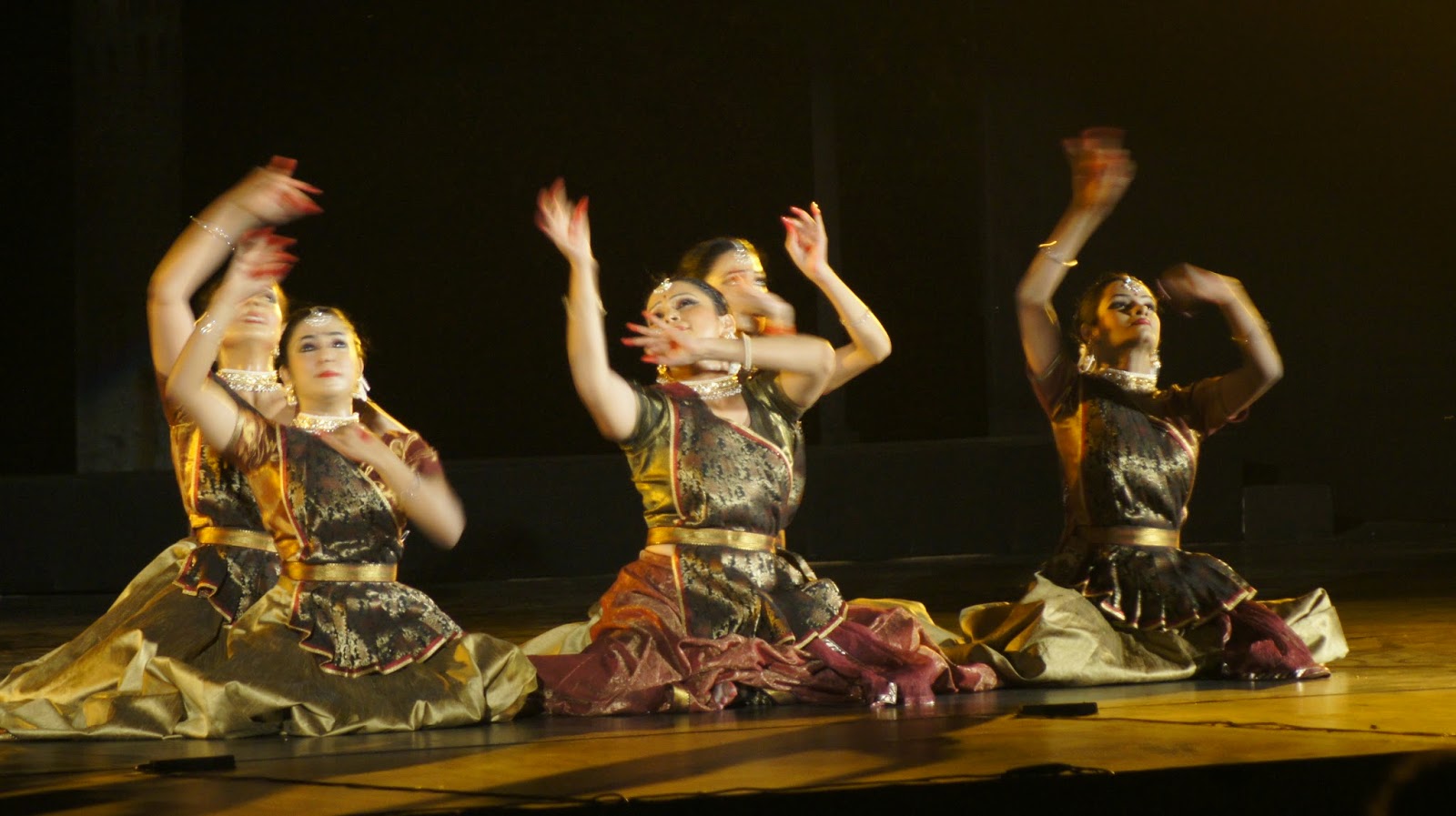 The dancers in Gauri’s group included Anukriti Vishwakarma, Amrapali Bhandari,  Meera Rawat and Shivalika Kataria. Concept and choreography was by Gauri Diwakar, mentored by Aditi Mangaldas. Text sourced by Shubha Mudgal and music composition by Shubha Mudgal and Aneesh Pradhan. Song was by Lal Balbir and couplets by Sayed Ghulam Nabi Rasleen. The musicians included Yogesh Gangani on tabla, Mahaveer Gangani on pakhavaj, Samiullah on vocals and harmonium, Kamal Ahmed on sarangi, Uma Shanker on sitar and Kiran on flute. The costumes were designed by Rachana Yadav. 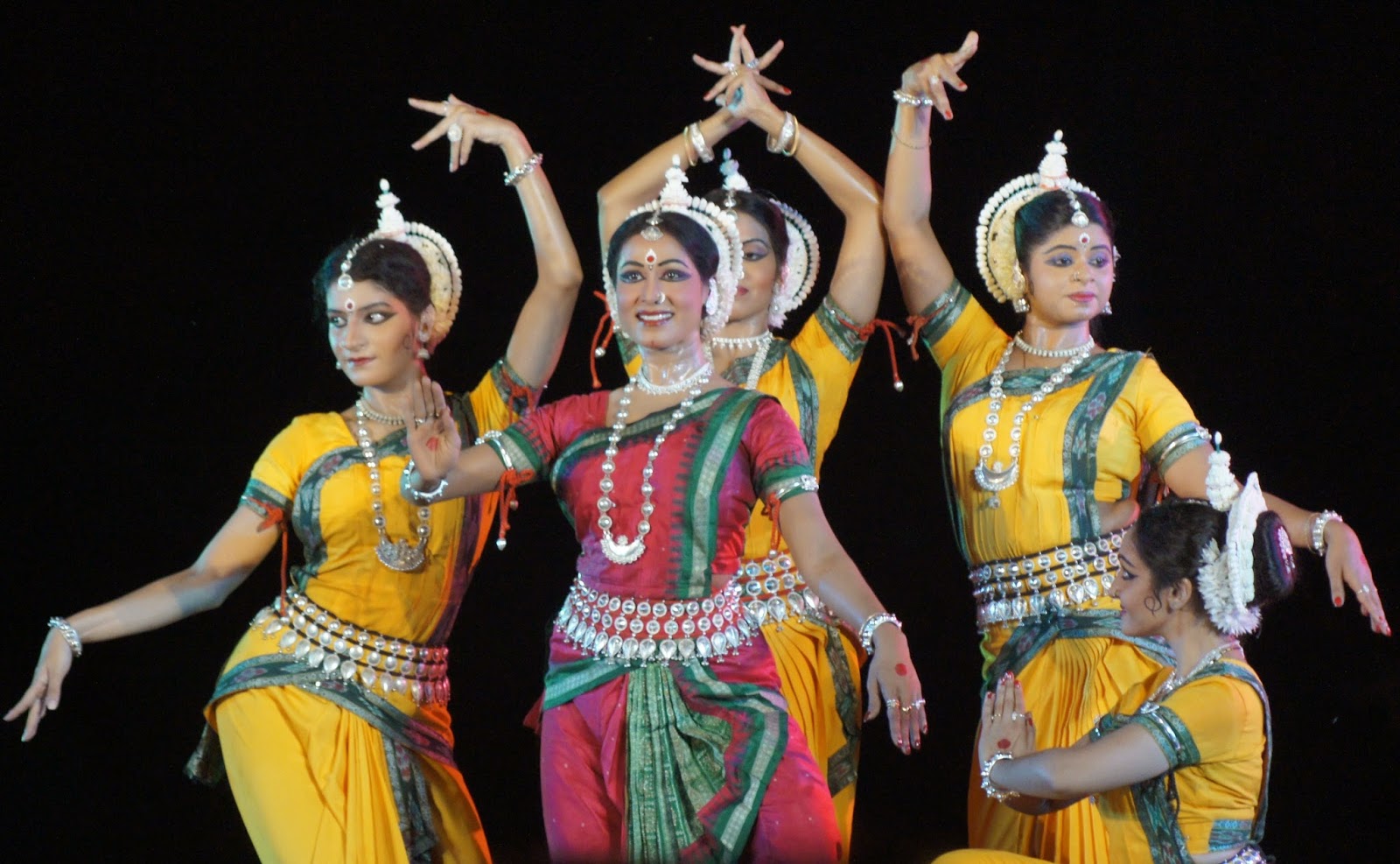 Sujata Mohapatra and Srijan performed Odissi on the fifth and final day. Sujata is a renowned Odissi exponent and is the disciple and daughter-in-law of legendary Guru Kelucharan Mohapatra. She truly shows the devotion and love for the classical dance form. She is not only a devoted disciple but also a graceful performer as well. At Srijan, the institute founded by her Guru, she works alongside her husband, Ratikant Mohapatra. She has been honoured with many titles and awards, such as the Pandit Jasraj award, the Sanjukta Panigrahi award, the Raza Foundation award and is an outstanding category artist in ICCR and Doordarshan.

Talking about the performance, Sujata said, “I am honoured to be here and it is a great privilege to represent the legacy of Kelucharan Mohapatra, performing with Srijan. It was only with God’s and Guru’s blessings that this has been possible. ‘Navadurga’ has been a unique choreography by Guruji and I have had a special connection with it.” 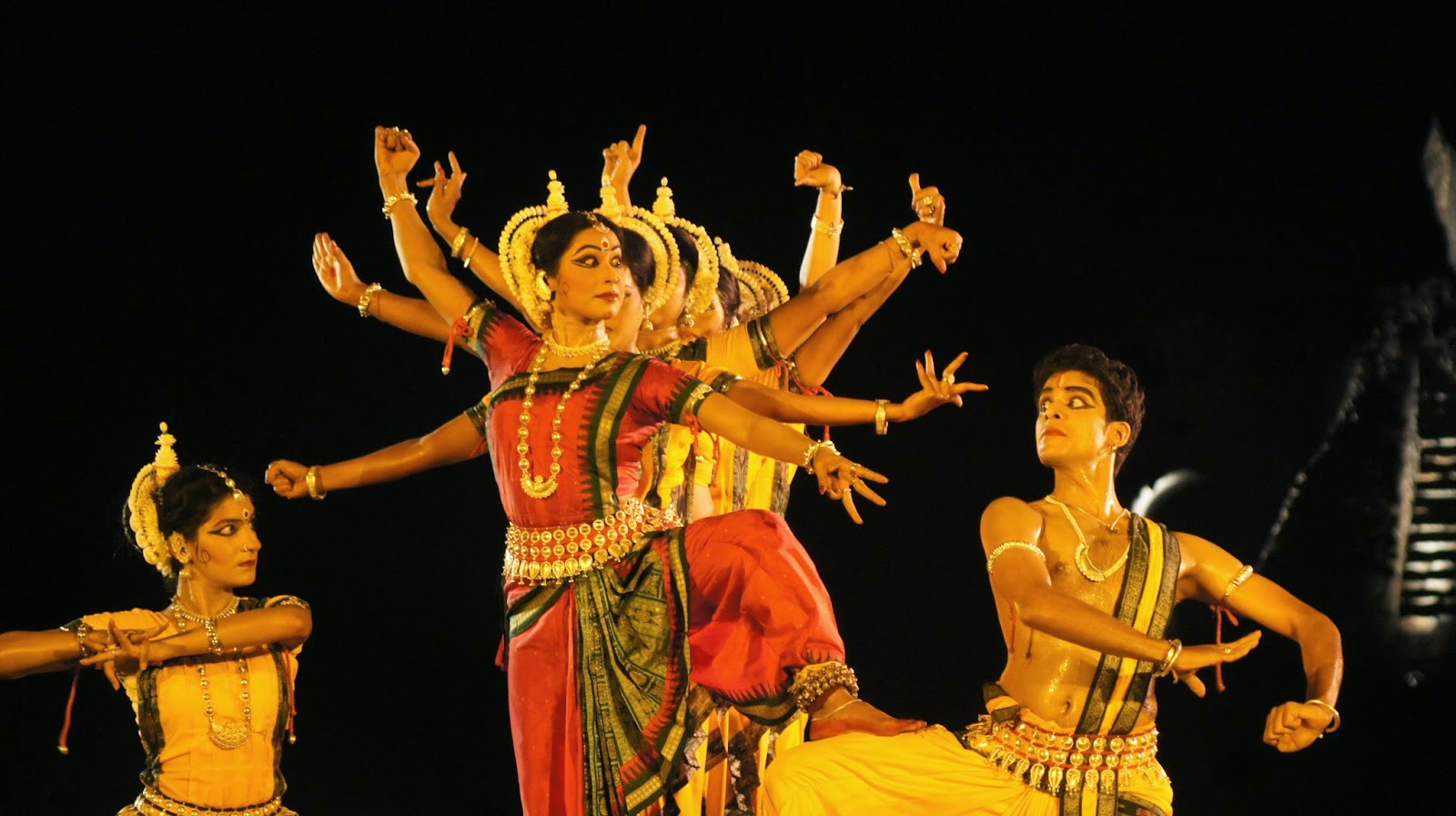 Sujata started the performance with a Mangalacharan. It was an ode to Lord Jagannath Swami (Jagannath swami nayan path gaami), followed by a shloka in the praise of Guru (Guroor brahma guroor vishnu, guroor devo maheshvarah). Brahma was depicted by the four-headed stance, Vishnu by the reclining posture and Maheshwara by the four-armed stance of the lord, all performed to live vocals. The next piece was a Batu, a pure dance offering to Batuka Bhairav. The dancers emulate the sculptures on the walls of temples, like a woman holding a mirror or playing on a musical instrument. The group choreography had a lot of grace and perfection. The third piece was a pallavi, a dance of pure joy . The raga blossoms from a slow pace to greater complexity and pace. The eyes, neck, hands, torso and feet move in a graceful and fluid manner. The composition was based on raga Kirvani, taal Khemta. The choreography was by Guru Kelucharan Mohapatra and music by Pandit Bhubaneswar Mishra. The group performed with great poise and grace and some excellent coordination. 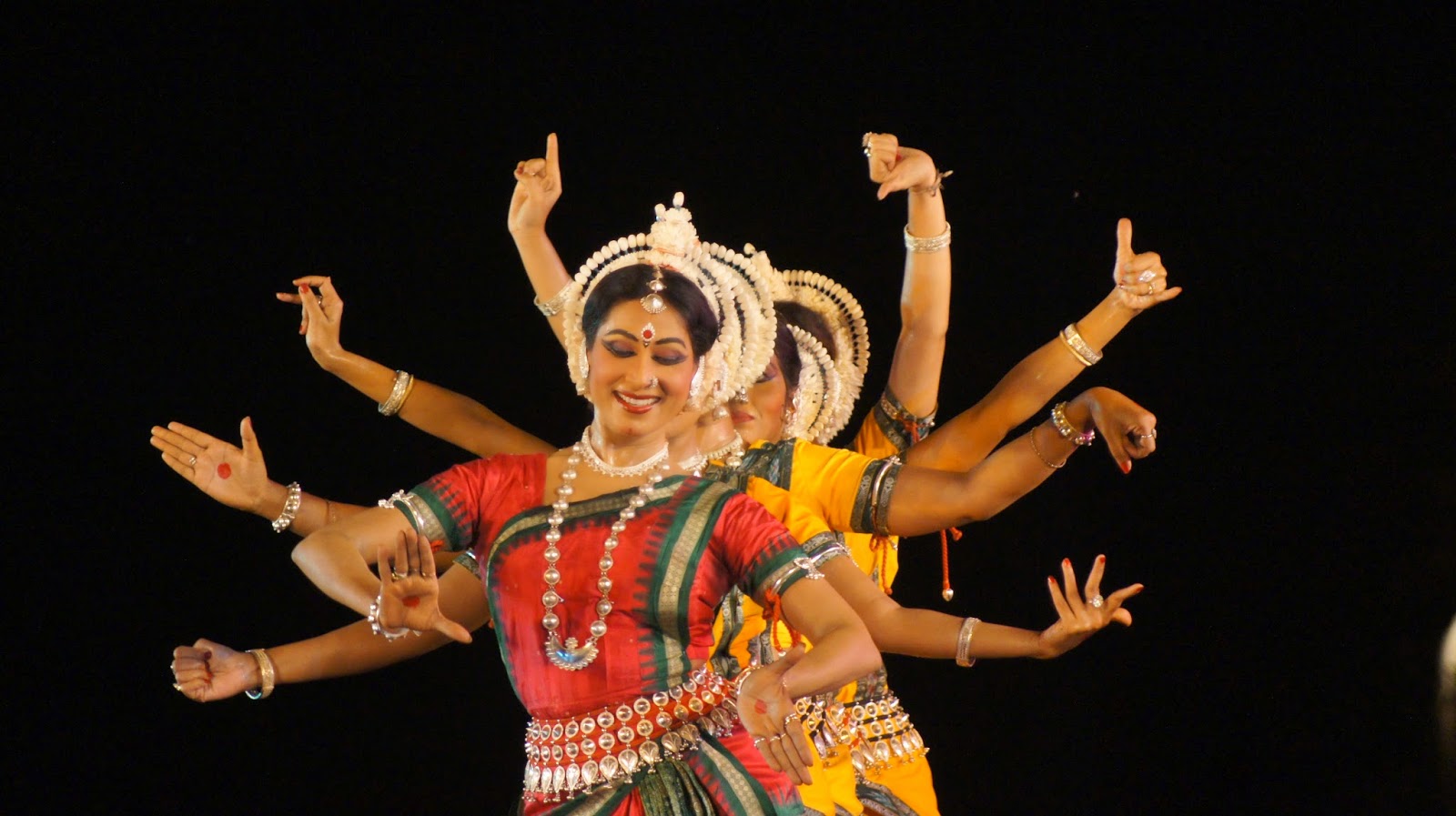 Finally, the group did a nritya piece, Navadurga, showing the nine aspects of Durga. The goddess has immense compassion for her bhaktas and for them, she takes on the form of the slayer of demons. The composition was in raga bhairavi, jati tala. In the beginning, the dancers lined up to form the eight-armed stance of the goddess. She was shown as the mother to those who pray to her (Matri roopen sansthita). The demons Shumbh and Nishumbh were slain by her. The group did stances to show the slaughtering of the two. She vanquishes the demon Mahishasur for which she has been given the epithet Mahishasurmardini (Shakti roopen sansthita). Sujata, in her bright red costume holding the posture for killing the demon, portrayed a divine picture with her expressions. Her eyes exuded divinity. Finally, they portrayed the nine forms of the Devi – Vanadurga, Mahadurga, Giridurga,  Jayadurga, Mahishasurmardini, Shaktidurga, Chandadurga, Bhordurga and Navodita. 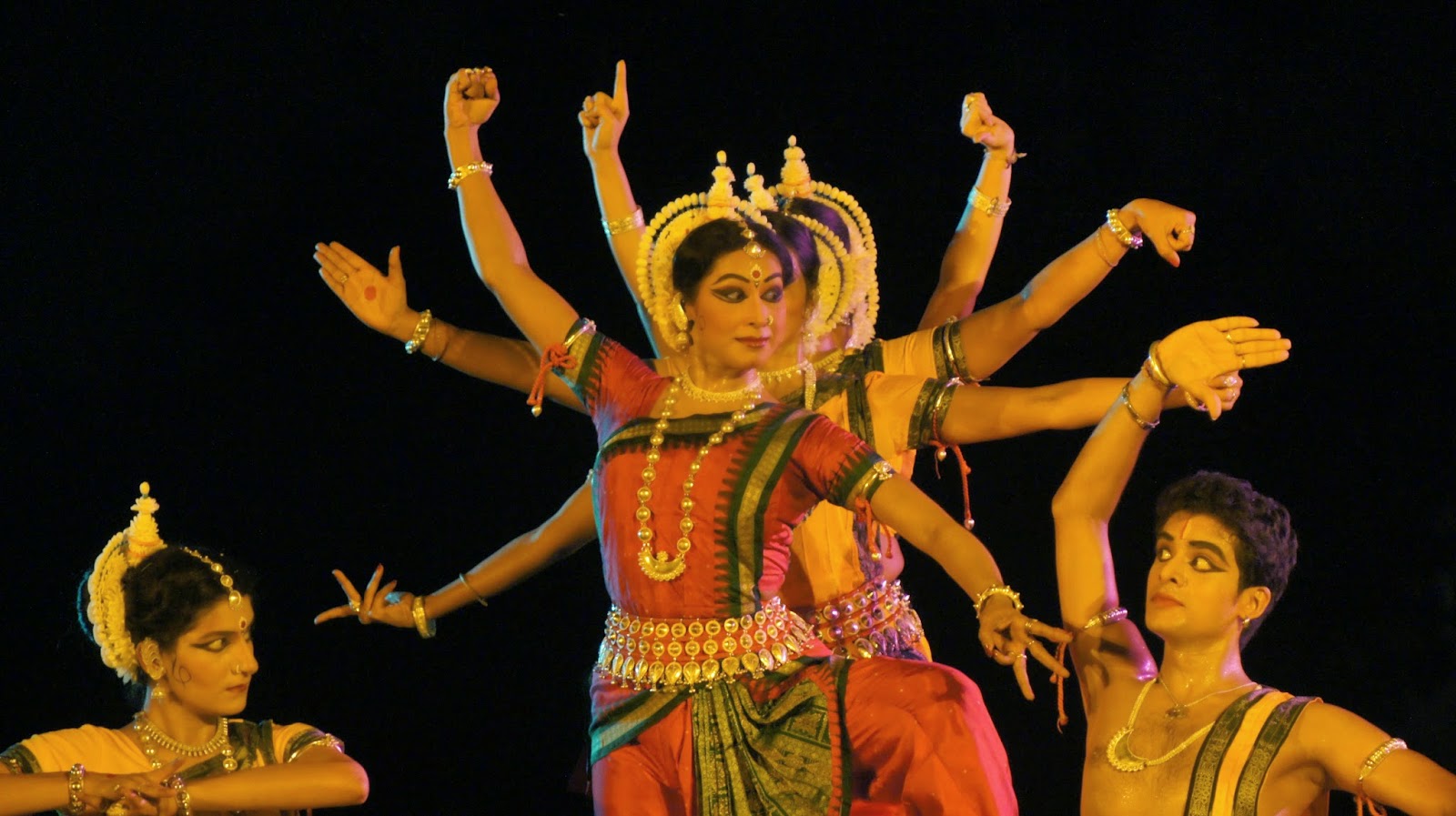 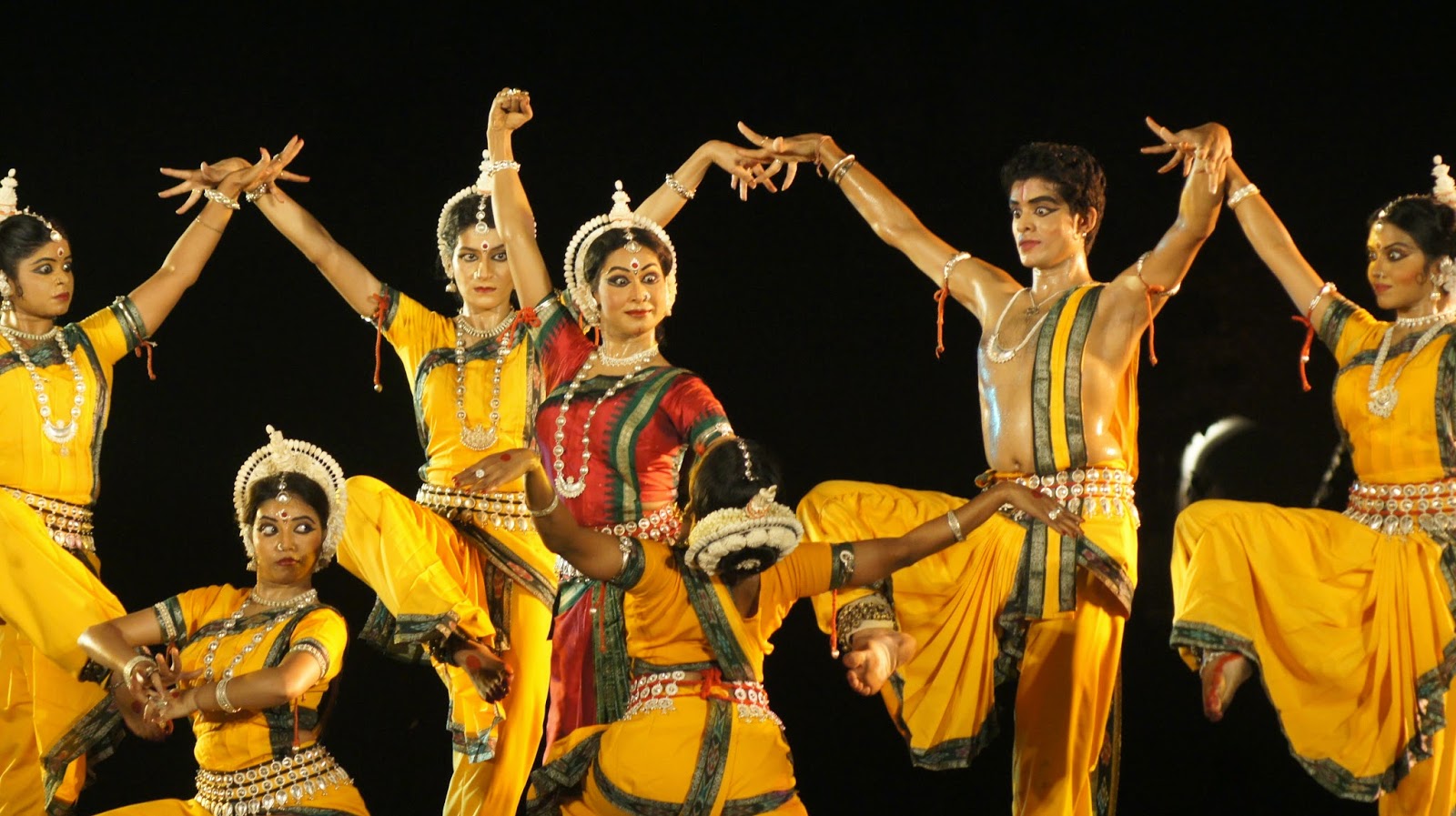